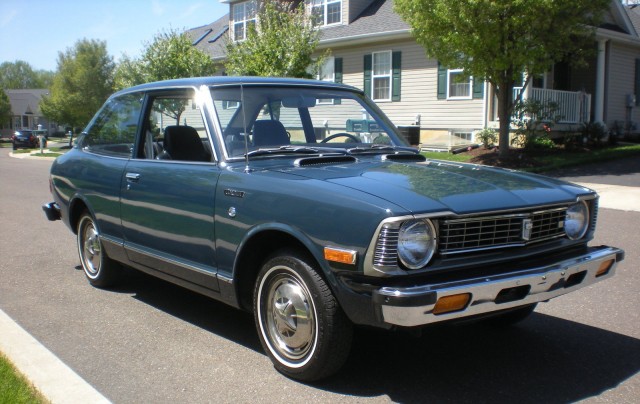 Proof again that California does not have a monopoly on classic J-tin comes in the form of this Philadelphia-based 1974 Toyota Corolla 1600 Deluxe. Said to be a one-owner car with just under 19,000 original miles, it is likely one of the least driven E20 generation Corollas in the country.

Finished in 829 Dark Blue, it appears to be blemish free with the engine and air cleaner even coated in Cosmoline. The interior is uber-clean as well, with in-tact vinyl that surely would have cracked under harsh sun had it been a SoCal car and plastic sheeting still covering the carpet. Clearly it has not seen the salty side of an east coast winter.

Alas, it is not a mango but a peanut and is saddled with an autotragic transmission. Still, it’s an unmolested, all-original specimen from the days just after the OPEC oil embargo. One wonders why someone would buy a car perfect for weathering long fuel lines and yet barely drive it at all.

In the 24 hours since we’ve known about this, the price has exactly doubled from $4,550 to a current bid of $9,100 at the time of this writing. With four days remaining and at least 19 bidders competing, this will likely go for much more. Best of all, there is no reserve. Find it here on eBay. UPDATE: Sold for $13,100!

permalink.
This post is filed under: for sale and
tagged: corolla, e20, kidney anyone, toyota.