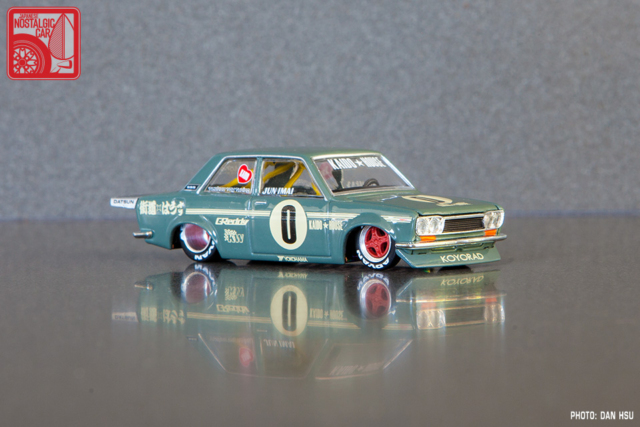 Jun Imai is a pivotal figure in the diecast world, having transformed the most “hot rod” of diecast brands into a leader in Japanese minicars. For that he became a star in the collectible car world, and ever since he left Hot Wheels in 2018 people have been clamoring for his next project. Now, Kaido House is finally here, we think it’s safe to say it takes the adult collectible 1:64 diecast car into new and exciting realms. 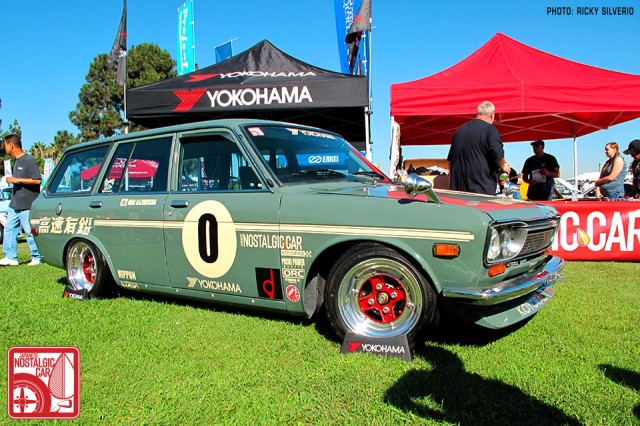 During his time at Hot Wheels, Jun created many of the transformative castings that pushed the company to new corners of car culture. Models like the Hakosuka Skyline, Mazda RX-7 and Toyota Celica introduced a new generation to the once muscle car-heavy lineup, paving the way for things like an entire series of premium cars steeped in Japanese car culture. Many of the watershed designs were based on Jun’s real cars, like his famous 510 Wagon or his S30 Z shown at SEMA.

For years, Jun has been working on his own personal brand, which he named Kaido House for his love of Japanese kaido racers and car culture. Even post-Mattel, Jun’s been creating incredible customs of Hot Wheels cars under that banner. Now Kaido House has launched its own line of diecast cars for adult collectors. 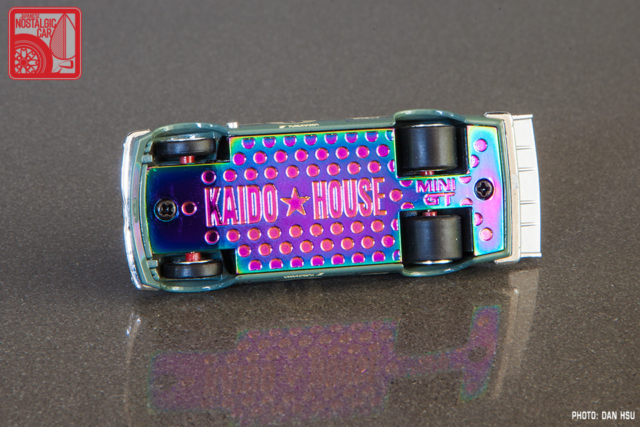 The line is produced by MiniGT, the 1:64 division of TSM, a maker of high-end 1:18 and 1:43 scale models. In that world, authenticity is key. You want a super-accurate Mercedes 300SL Gullwing that you can park on your mahogany executive desk? Or an Acura NSX GT3 with the exact livery from a specific IMSA 6 Hours of Watkins Glen race? TSM has you covered. It makes wonderful models, as Jun puts it, “rooted in true scale, replication, and precision,” and these types of offerings have been the bread and butter of the scale model world since time immemorial.

However, a chance meeting between Jun and and TSM president Glenn Chou at the Indonesian Diecast Expo in Jakarta several years ago sparked a collab idea between the two. “What if I can make my style of cars but with MiniGT’s development and manufacturing capabilities?” Jun asked. It was something never done before. 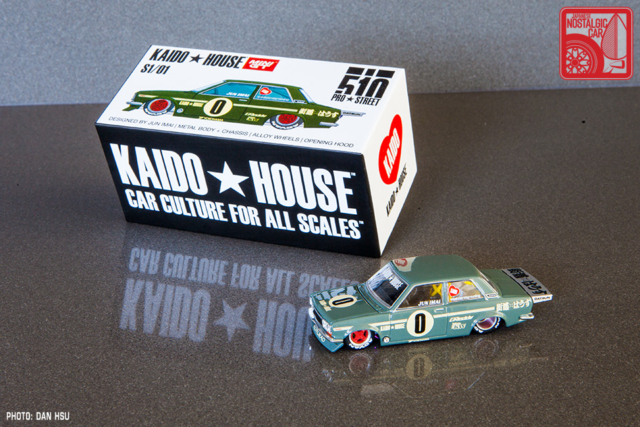 The Kaido House line kicks off with an unusual choice, a Pro Street Datsun 510. Naturally, our first question was, why a pro street Datsun? After all, Jun’s built his name around creations steeped in Japanese culture. “I wanted it to be a clear differentiation from my past work,” he told JNC. “I don’t want to repeat what I did, so I thought, ‘What’s one of the most extreme ways to build a 510?'”

“It’s still JDM style all the way,” Jun explained, “It has a Nissan engine, not a V8 swap. It has 4-spoke wheels. The tires are Advan drag slicks.” That kind of rubber doesn’t exist in real life, but Jun added, “I wanted to celebrate my partnerships with companies like Yokohama and GReddy,” who have sponsored his 1:1 projects. 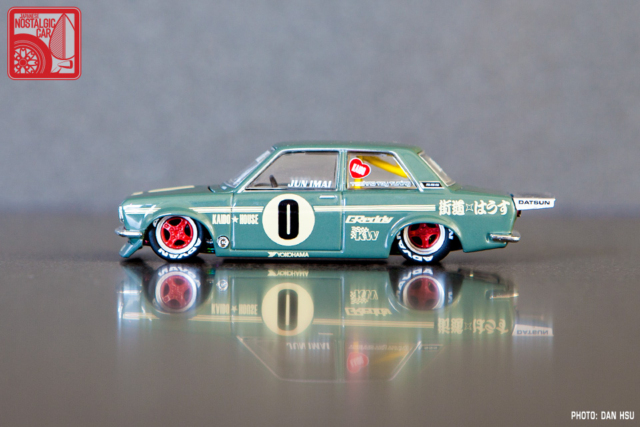 Even if you don’t know anything about Japanese car culture or Jun’s history, the model itself is something to behold. Finished in the tan over green that Jun’s 510 wagon was known for, it features an opening hood with amazing engine detail, loads of overlaid graphics, and what would be authentic aftermarket bits if this were a real car, such as a roll cage and pro street-style spoiler.

It’s comprised of over 35 individual parts, with an astounding level of fine detail and fitment. Just as an example, each headlight lens is a separate part, and they go into a headlight bucket which is itself also a separate part. “Working at that level was a completely new experience for me,” Jun said. 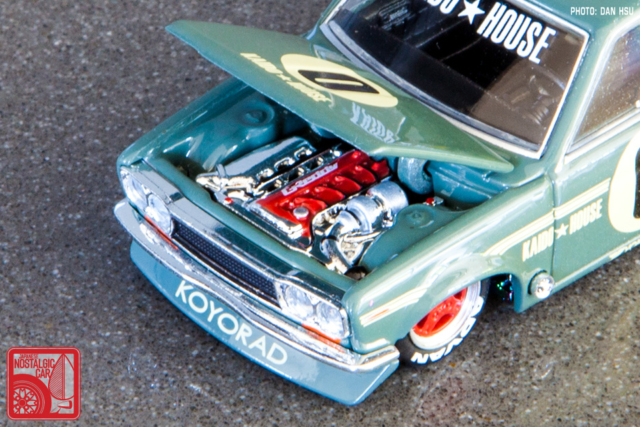 What’s more, the car overflows with details that the casual diecast fan might not notice, but real gearheads will appreciate. The radiator referenced a real Koyorad unit. The engine is a replica of a Nissan KA24 turbo built and licensed by GReddy as complete kit, its plumbing was physically laid out by Kenji Sumino at the aftermarket tuner.

The wheels are actual two-piece units and pioneer another industry first that would be a headline on any other article: It’s the first 1:64 to have real aluminum barrels for the wheels. Each one is made from a machined aluminum billet barrel, and there’s four of them per car. 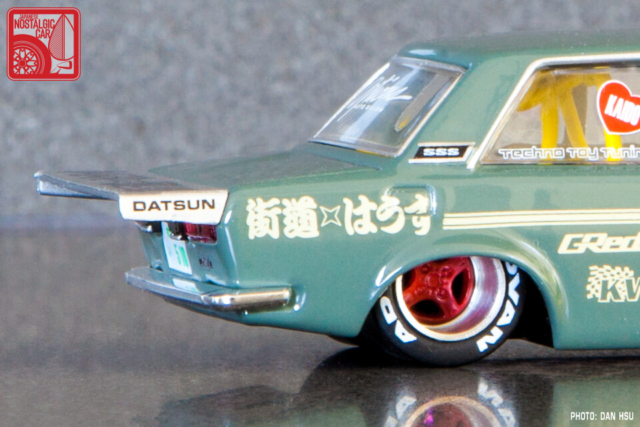 It’s something that hasn’t been pursued in the diecast world due to cost and sourcing. It’s also something that you might never notice if the car spends its life behind the acrylic case it comes with. Still, that’s the level of detail Jun aimed for, and it gets even crazier.

“Every car in the Kaido House line will have them,” Jun told us, “and each car will have unique wheel sizes.” That’s because, as any car enthusiast knows, wheels make the car. He then reveals that he worked painstakingly to ensure that each model has perfect fitment appropriate to the car. Jun is proud, and rightfully so, of the fact that he was able to close the fender gap for dramatic stance, yet allow each rubber-tired car to roll freely. This focus on the wheels will be a Kaido House hallmark.

It would be logical to expect one of these cars to retail for a ridiculous price, considering what went into it. However, the price is just $20. Naturally, each casting will spawn color variations and chase cars, but Jun was adamant that the latter be indistinguishable from their mainstream variants unless you open the boxes. “If the chase cars are visible through their packaging dealers mark them up,” he explained, “But I wanted this to truly be for the collectors.” 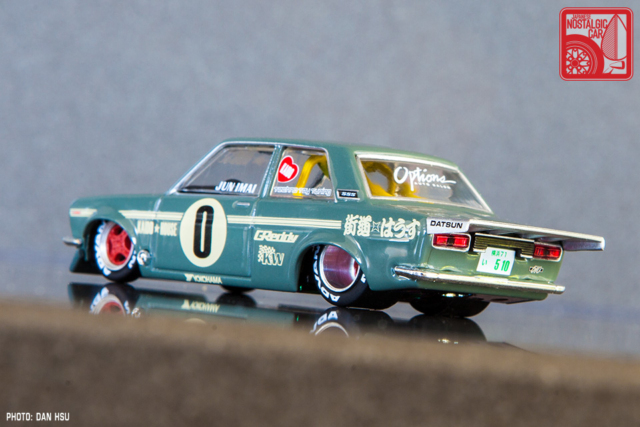 We were able to glean what some upcoming castings Jun has in store, but we’re not going to spoil everything. What we can say is that a Datsun 510 Wagon is coming, but it won’t be like anything you’ve seen before. “I might do a 2-door shooting brake that’s also a widebody with an RB26 engine,” he suggested in a tone that split the difference between joking and all seriousness.

“These cars will represent what I would build in 1:1 scale if I had the means,” Jun said, but that would be putting it in the most literal terms. More generally, “It’s a piece of car culture you can hold in your hand.”

Many, including we here at JNC, were sad to see such an influential figure leave Hot Wheels. Thankfully, it wasn’t the end of the road but a new chapter. It’s great to see Jun embark on a new venture, doing what he loves, and once again changing the diecast world in the process.