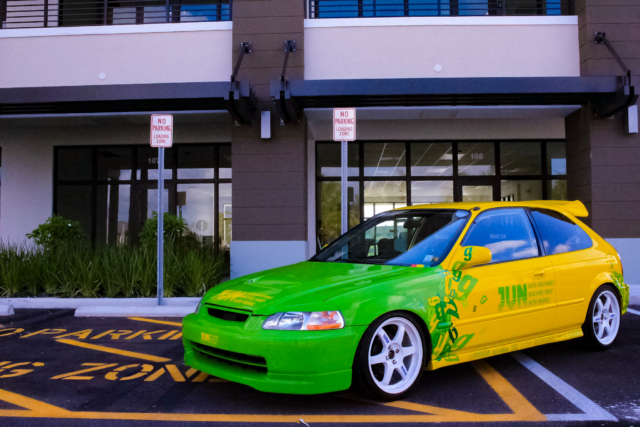 While Honda honors the history of the Civic with hidden easter eggs, celebrating it outright would entail driving a brightly colored screamer built by one of the powerhouses of Japan’s tuning world. There’s no better way to start off the month of June, than with possibly owning a Jun-modified Civic. 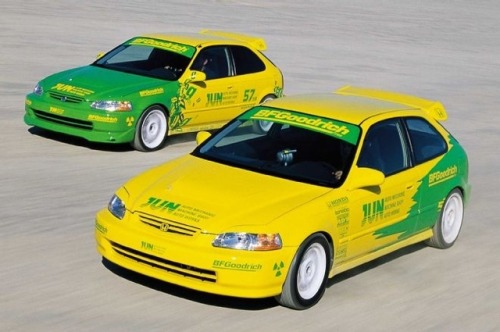 During the height of the Tuner Era, Super Street collaborated with BF Goodrich and Jun Auto Mechanic of Signal Hill, California to build two EK4 Honda Civics for a magazine giveaway. The result? A dyad of hatchbacks for two seemingly opposite disciplines: The Jun g-Force T/A drag car and the Jun g-Force T/A solo car, both powered by Jun-spec motors and finished in the iconic Jun “Super Lemon” livery.

At the time these came out, a drag car was still one of the preeminent ways of modifying a Honda Civic. The Jun cars were a branded into the memories of every tuner-loving kid of the era, especially in BF Goodrich’s indelible color-saturated full-page ads of the era. The g-Force T/A drag car was tragically stolen and stripped in 2008; making this g-Force T/A solo car the remaining Jun-built USDM Civic in existence.

The car still wears its Jun vented aero hood, Type-R front lip and grille, headlight eyelids and Jun aero wing; all of which is still wrapped in its retina-searing green-and-yellow Jun x g-Force color scheme, populated by more g’s than Compton and Long Beach combined. An Integra GS-R brake system with Brembo cross-drilled and slotted rotors peeks behind 17-inch — what else? — Volk Racing TE37 wheels in a period correct white.

The grey interior is a whole a Sparco catalog, decked out with the brand’s steering wheel, pedals, racing harness, and Sparco Sprint bucket seats. A column-mounted Pivot tachometer keeps the Jun-built B18C in line. Behind it lies a Civic Si-sourced instrument cluster with 74,000 miles, although the actual mileage on the car is unknown.

The undercarriage still proudly displays the stainless exhaust, Skunk2 control arms and Tanabe SUSTEC coilovers installed by Jun in 2001. Even the backs of the TE37s are shown to be free of brake dust and still have their stickers denoting the specs, build date, and serial number.

The car also comes with memorabilia from its heyday, where it was often paired with its drag-car twin. The iconic shot of it cornering on three wheels not only exemplified its road-racing purpose, but was forever implanted into the brains of import enthusiasts of the era. 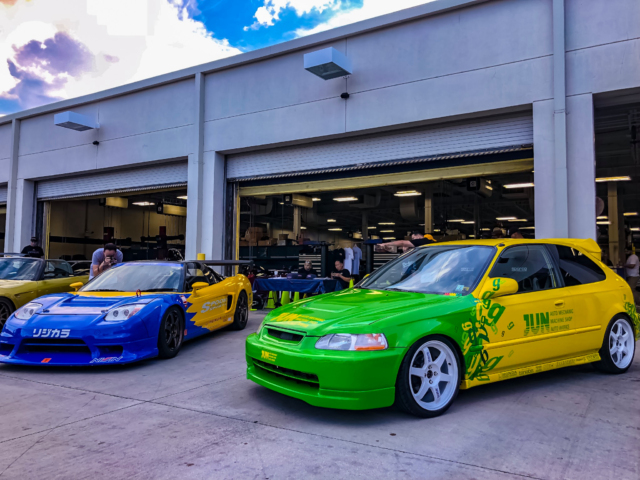 This car is a hero of the Tuner Era and a part of its history. It was born while Jun founder Junichi Tanaka was still alive and carries the Jun spirit of challenging all facets of motorsports. Its drag-racing counterpart may no longer exist, but perhaps this surviving car can be preserved, a firm reminder of the achievements of Japan’s tuning heyday.