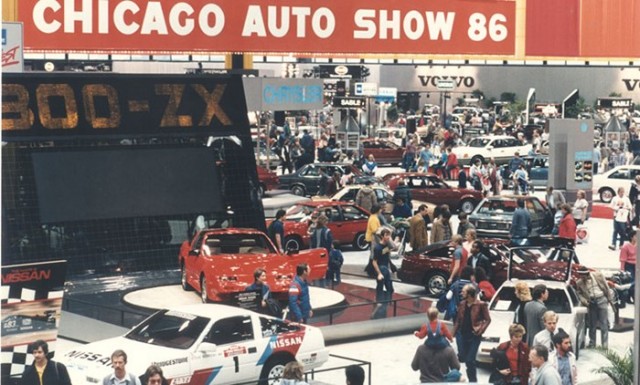 The Chicago Auto Show first began in 1901 and calls itself the largest auto show in North America. They have an incredible photo archive spanning the decades, many of which include JNCs. Until someone invents a time machine, this is the closest many of us will get to experiencing what it was like to encounter these cars when they were still new.

Toyota was the first Japanese automaker to arrive in the US, so for the 1950s Toyopet Crowns and Land Cruisers make up the bulk of the JNC content. In the 1960s the Corona became ToMoCo’s first real success in the North American market.

Nissan’s 1966 exhibit space featuring a Datsun 411 is the definition of bare-bones. By 1969 though, their booth resembled a legit auto show display. Fuji Heavy Industry’s 1970 display, however, was still looking pretty spartan, just like the Subaru 360.

In the 1970s booths exploded with colorful grooviness and model selection. It seems odd that Nissan’s 1970 display showcased the 1200 on a turntable (slogan: “We took the ugly out of economy and put performance in.”) instead of the 240Z. And just one of each model was scattered haphazardly about, making the stand look rather sparse. However, by 1975, the big guns were out, with several of each model on the floor. Similarly, Honda was barely making an effort in 1971 but by 1975 they had built a life-size diorama for their Civic CVCCs.

Mitsubishi was still not a brand in the US yet, and all their cars were sold as Dodges and Plymouths. As a Big Three automaker at a midwest show, Chrysler had prime real estate and a huge budget, making the “Colt Corral” quite lavish.

In 1974 the Toyota display featured the F101 concept car on a turntable alongside Corollas and Corona Mark IIs. The F101 was billed as the “sedan of the future” and featured an 18R-C and disc brakes and independent suspension at all four wheels.

Nissan’s 1976 display included a 1935 Datsun Type 14 Roadster amongst the B210s and 620s. Mitsubishi was still captive to Chrysler in the late 70s, and in the wake of the Oil Crisis Plymouth boasted of the Arrow’s (aka Lancer Celeste) mileage advantage over other domestic compacts like the Ford Pinto and Chevy Vega.

In 1978 Toyota showed the CAL-1 concept, built at CALTY from an A40 Celica (despite being RHD) and inspired by personal watercraft.

Amazingly, in 1979 the Dome Zero concept was shown in all its composite, gull-winged glory. That same year, the SCCA’s Chicago region special display showed just how influential Japanese cars were to the road racing scene. A silver Mazda RX-3 sponsored by Illinois’ Glenview Import and Bob Sharp’s Datsun 280Z were both featured prominently.

By 1980 most Japanese automakers had sizeable lineups. At the Dodge booth, Texas Governor John Connolly climbed behind the wheel of a Challenger (or Mitsubishi Galant Lambda). Subaru had become an official sponsor of the US Winter Olympic team, and the official team car was displayed amongst other AWD machines like the BRAT and Leone wagons. Meanwhile Nissan’s booth featured the famous Black Gold 280ZX as its centerpiece to celebrate the 10th anniversary of the Z.

In 1982 Datsun officially became Nissan, and the new 200SX took center stage. Toyota debuted its landmark A60 Celica and Supra models and a red 2000GT was even displayed in a special section. Mazda proudly showed the RX-7 that won the 24 Hours of Daytona earlier that year. It would herald a decade of IMSA domination in what would become the automaker’s trademark white-and-blue race colors.

By 1983 Mitsubishi was a full-fledged brand in the US, and as such displayed a replica of their first car, the 1917 Model A, amongst Cordias, Monteros and a Starion. Elsewhere, a Plymouth Arrow proved the Mopar connection was still strong. Meanwhile, Toyota was launching the Corona’s replacement, the juggernaut that would be known simply as “Camry.”

In 1984 the Datsun-to-Nissan transformation was officially complete. Nissan highlighted a two-tone 300ZX Turbo, built to mark the company’s 50th anniversary, while a red Z31 was marked as an official car for the United States Gymnastics Federation. Across the hall, Chrysler was showing off the Conquest (aka Starion), marketed as “imports with a purpose” and imploring customers to “Conquer the road, capture the feeling.”

Toyota’s 1985 display marked the debut of the legendary AE86 Corolla GT-S. Along with a pair of MR2s, the booth was a 4A-GE fan’s dream come true.

Towards the end of the decade Japanese cars had shed their economy roots. 1987 was the second year for Acura, Japan’s first luxury marque, as Legends and Integras pioneered the slow climb upmarket.

In 1988, Nissan displayed the second limited edition Z31 ever built, the Shiro Special. Only 1,002 were made. Toyota displayed the first Supra Turbo and a supercharged MR2.

By 1989, Japan’s sports car renaissance was in full effect. Nissan unveiled the Z32 300ZX Twin Turbo that would go on sale the following year while Honda showed off the spectacular NS-X concept that would change the supercar world. Mazda took the occasion to launch the MX-5 Miata, a hugely influential sports car whose 25th anniversary we just celebrated.

And with that, we have reached the “nostalgic threshold” of 25 years. If you’d like to see the displays of non-Japanese automakers from the period or images from more recent Chicago Auto Shows, click here. Which one would you bring back in your time machine?