The surprise dropping of the trailer for the upcoming Top Gun: Maverick has given fans of Japanese nostalgic motorcycles a cool throwback to the 80s. In one scene, Tom Cruise’s character whips the cover off his old bike, a Kawasaki GPZ900R, otherwise known as the original Ninja. It was a fitting steed for Cruise’s Lt. Pete “Maverick” Mitchell, because at the time it was the fastest production ever made.

Released in 1984 (In 1983 in Japan), the GPZ900R was Kawasaki Heavy Industries’ game-changing flagship bike. It incorporated technologies at the time unheard of on a roadgoing two-wheeler, such as a diamond-shaped high-tensile steel frame that used the engine itself as a stress member. That motor, a wet-liner water-cooled 908cc 16-valve inline-four, was the first of its kind offered on a production motorcycle.

Good for 115 horsepower at 9,500 rpm, it was enough to push the fully faired Ninja to a top speed of 158 mph. As such, it became the first production bike to surpass the 150 mph mark, a characteristic Cruise used to full effect in the iconic scene where he rides his Kaw alongside an F-14 fighter jet taking off. 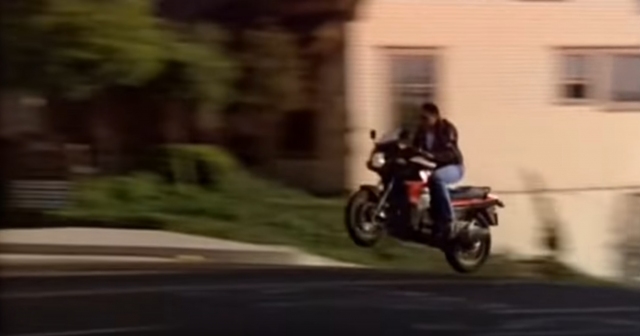 The bike appeared throughout the film in several memorable scenes, including a brief chase with Kelly McGillis’s Porsche 356 (with bonus S30 Z and A10 Tercel content), Cruise using the 10,500 rpm redline to drown out McGillis’s excoriation, and of course the seaside makeout session.

Incidentally, in the trailer for Top Gun: Maverick has Cruise reprising his runway race in a newer bike, Kawasaki Ninja H2. As it happens, the H2 is the street legal version of the H2R, a supercharged, 310-horsepower track bike also holds today’s record for fastest bike produced, capable of something like 250 mph.

The original Ninja 900 became a template for the modern crotch rockets of today. Cruise wasn’t the only celeb enamored with the GPZ900R. Lou Reed also owned one, and even mentioned it in song. In any case, it’s refereshing to see a faithful adherence to vehicular precedent — even when a sequel is separated from the original by 34 years — especially when films purportedly with cars as their central feature don’t even do that. Top Gun: Maverick is scheduled to hit theaters June 26, 2020.