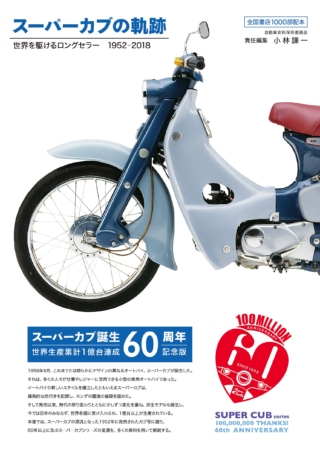 The Honda Super Cub reached the sales milestone of 100 million units last year and turns 60 this year. To commemorate the occasion, a new book has been issued. The Trajectory of Super Cub, by Kenichi Kobayashi, is said to be the definitive book about the venerable bike.

The book begins before the Super Cub itself, in 1952 with the development of the Cub F, the Super Cub’s predecessor. It follows Honda’s quest to build the “lightest bike in the world — smart, easy to use, and fuel-efficient.” It covers important moments in y model’s history, includes color catalog photos, and also a chronology of model changes.

The original volume of this book was published in 2012, but this version updates the story with newly unearthed information and the happenings in the years since. Though written in Japanese, the images should still prove useful for non-Japanese readers. The retail price is ¥3,034.

1 Response to JNC Library: The Trajectory of Super Cub