VIDEO: Jerry Seinfeld will drive the hubcap off a Mazda Cosmo Sport 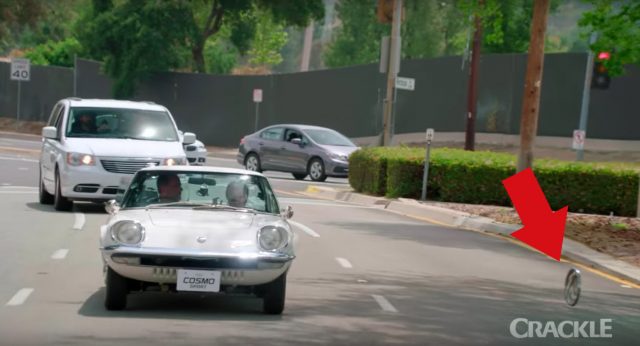 In the trailer for the upcoming season of Comedians in Cars Getting Coffee, Jerry Seinfeld drives the hubcap off a Mazda Cosmo Sport. This marks the first Japanese car to appear in the series, if you don’t count the completely pointless Acura plug cars that Seinfeld would point at saying, “Here’s the plug car,” before swiftly moving on. The season’s guests are Judd Apatow, Margaret Cho, Jim Gaffigan, Lorne Michaels, John Oliver, and J. B. Smoove. Can anyone guess who gets the ride in the Cosmo Sport?

If you guessed Margaret Cho, you’d be correct. As regular watchers know, Seinfeld tries to pair this guests with the car. Cho is a motorcycle enthusiast and has owned a classic 1966 Honda Dream 305, among others. What’s the connection to the Mazda? We’ll have to wait until June 16, when the new season airs, to find out.

Full disclosure: JNC was contacted by Seinfeld’s producers to source the Mazda Cosmo Sport. We were not told which comedian would be getting coffee in it.

2 Responses to VIDEO: Jerry Seinfeld will drive the hubcap off a Mazda Cosmo Sport