A few days ago, we posted up a link to JDM old-car dealer Harfee’s (here) and one of our readers expressed a little surprise at the prices that some classics fetch in Japan.

Of course, nobody would be surprised that things like a Hakosuka would fetch good money in Japan. But surprisingly, there are many cars which are worth very little in western markets, yet are worth a pretty penny in Japan. A couple of examples like the 280ZX (here’s one at Red-Megaphone for Y2.2mil, about A$23,000) or a 510 coupe for not much less. So we got to thinking about relative values, and dug out some 1997 classic car magazines, and compared the going prices for popular classics compared to today. The results are surprising.

I would be the frst to admit that this isn’t the most scientific study in the history of journalism, but hey, at least you get to see what these things go for in JDM-land!

Prices for a real Hakosuka GT-R have never been cheap, but would you have predicted that prices would have risen 186% in 10yrs? The prices for GT-Rs at the very top end of the market reflect that many have been recently subjected to extremely expensive nut-and-bolt restorations, so if you had bought a clean GT-R in 1997 and salted it away, it wouldn’t necessarily fetch $150k today. As for 4dr PGC10 GT-Rs, we didn’t find any on sale in our sample of 1997 mags, but 2007 prices average at the Y5.2m mark, meaning that the sensible sedans are worth a lot less than their sexy coupe cousins.

What muddies the situation more is that most GT-Rs on sale today list “POA” instead of a price, so it’s hard to say what a clean unrestored GT-R would be worth in 2007, but we have seen them advertised for about Y7m upwards. One thing is for sure, and that is that with only 2000 GT-Rs made (800 sedans and 1200 coupes) out of a total C10 production run of 220,000, they are only going to get rarer.

If you can’t afford a real GT-R, there have always been plenty of replicas that you can buy. Usually based on the sporting 2.0L L20 6cylinder 2000GT, there’ll be no DOHC S20 motor under the bonnet. But most will be made to look just like a GT-R, with flares, spoilers, and dished Watanabes. Often the replicas will be a lot wilder than most genuine GT-R owners are willing to take their cars and many replicas run tweaked big-cube 2.8L SOHC L28 motors (which would show most road-trim GT-Rs a clean pair of heels anyway).

In terms of values, GT-R reps have moved 41% in the past 10yrs, with many cars at the top end of the range having enjoyed extensive restorations to put them in better condition than any 1997 car, and 2007 represents some good buying, with many outstanding replicas on the market.

1997 values for the “cooking” Hakosuka sedan are very low, and our 1997 sample shows few modified examples. But the 2007 sample includes many modified cars, slammed on big Watanabes and with triple-carbed big-cube engines. The most expensive example in our 2007 sample was treated to a very extensive, bare-shell restoration too, and the 133% increase in average price reflects the increasing desireability of the strait-laced Hako sedan. For a full-GT-R sedan replica, the rear wheelarches need to be modified from the stock “surfline” (like the white car above) to the cutaway round GT-R sedan arches, but 100% GT-R replica authenticity doesn’t seem to be a big factor in prices at the moment.

I guess many more people are realising that the sedan can drive just as well as the coupe, with all the fender-mirrored retro charm and greater practicality too. 10yrs has seen the Hako sedan rise from a much cheaper base to exactly the same average price as the Hako coupes. There are still 4 cyl 1500cc base model sedans available however at the bottom end of the price range, but if you’re in the market for a C10, many of the very best ones will be sedans.

Well, there’s no shortage of old Fairlady Zeds on sale! The past 10yrs have shown an average increase in prices of 61%. Rather like the Hakosuka GT-R replicas, surveying the 2007 crop of Zeds shows that many of them have had some serious coin invested in them and many are the full-quid Wangan Midnight replicas, with big bolt on flares and enormous wheels and tyres. Casting a glance across the spec sheets shows that many of them have mental engines punched out to 3.1L too.

It may be surprising to most westerners, but in Japan S30 Zeds sell at about the same price-point as Hakosuka GT-R reps, which reflects the iconic status of the Fairlady Z in its home market.

Where have all these things gone? In 1997 there were plenty for sale but in 2007 they’ve all vanished. The increase in average price however, is heavily skewed by the very nice red example at Red-Megaphone (pic above).

In western markets, the 280ZX is often seen as a step backwards from the 240Z, but in Japan they were much more highly regarded, with their bigger engines (and the availability of the later turbo version) offering more tuning potential (and at one point it was the fastest domestic car on sale in Japan too), and in the early 80s the street racing scene in Japan was full of them. The 280ZX may not have the benefit of an anime or cartoon featuring it, but there are still older blokes in Japan who remember these things fondly as being the JDM tuner car to have of the late 70s , and so they can still command a high price if in good condition and desireable spec.

The ancestor to all performance and racing Skylines still doesn’t seem to enjoy high values. Average values have doubled, but it’s hard to say if that is representative given the small samples, and base-spec 4cyl Skylines at low values have dragged down the average price somewhat.

If you’ve always thought that while the C10 Hakosuka has the heritage, the C110 Kenmeri coupe has the looks, well it would seem that Japan has caught onto this too, and today’s values have jumped considerably since 1997. 10yrs ago, a well modified Kenmeri GT-R replica would go for Y4-500,000 less than a C10 Hako rep, but today the gap is much narrower, and at the top of the market there really isn’t any difference.

As for Kenmeri sedans, they go for much lower prices and this is probably a reflection of the fact that, unlike the previous generation, there was never a sporting GT-R version of the Kenmeri sedan. Many C110 sedans are done-up bosozoku-style which tends to keep the prices down.

The good old 510 is a cool ride in anyone’s language but in Japan good ones command surprisingly high prices. There are plenty of clean, stockish examples in our sample, but only the fully-modified coupes will justify Fairlady Z prices. 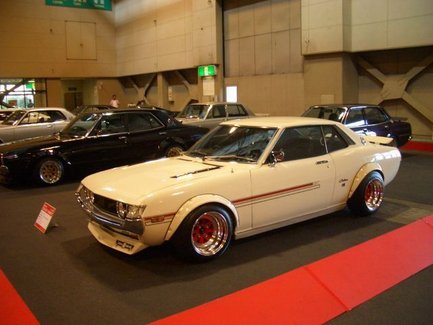 Strangely (to me anyway) the TE27s have a much lower market value than expected. Considering it has a decent sporting history (and it has FLARES, dammit) and good performance from its DOHC 1600, this was surprising to me.

One of Japan’s very first proper sports cars is the Fairlady Roadster (and in Fairlady 2000 form, one of the first JDM cars that was genuinely fast, with a 15.6s qtr mile).
The Fairlady gets some pretty high prices as you would expect, but they probably don’t have the wow-factor to get the really high prices that the Zeds and Hakosukas get.

The high prices asked for these things are perhaps the most surprising! Basically they are the sporting versions of the mid-size Nissan sedan/coupes, but with the 6cyl Skyline engines (later Bluebirds would have the 2.8L from the 280ZX no less) for a great power to weight ratio. So in the 70s, they would have been the bad-boy hot rods, the bank-robber getaway cars, the street-drag racers. And maybe the nostalgia for the notoriety these cars had in the 70s (and the tough muscle-car styling) explain why they’re suddenly so desireable today.

As I said at the beginning, this isn’t meant to be an exhaustive survey, but rather just a glimpse of what things cost in Japan. And the news is that the desireable classics are commanding higher prices than ever before. For example, the Y2.5m that you would need to buy a Hakosuka GT-R rep would buy you a brand-new Mazda RX-8 in Japan. And similarly, the Y1.5M or so you would need to buy a good 510 would also buy you a pretty nice late-model FD RX-7 or R32 Skyline GT-R. So prices indicate that classics are more popular than ever, and highly prized. And in most cases the JDM values are much higher than in say the USA or Australia.

What is surprising however, is the vast range in price between the various marques. To most westerners, a twincam Levin TE27 or Celica is a highly desireable car, but the Japan values don’t reflect that. Instead, the Nissans command the highest prices (and then only the big-banger sixes) but relatively speaking the Toyotas are quite undervalued.

But it’s good news if you’re a Toyota fan and want to import your own classic! In the next couple of weeks we’ll begin a series of articles on importing JDM classics, with some handy tips, and also the risks and pitfalls.