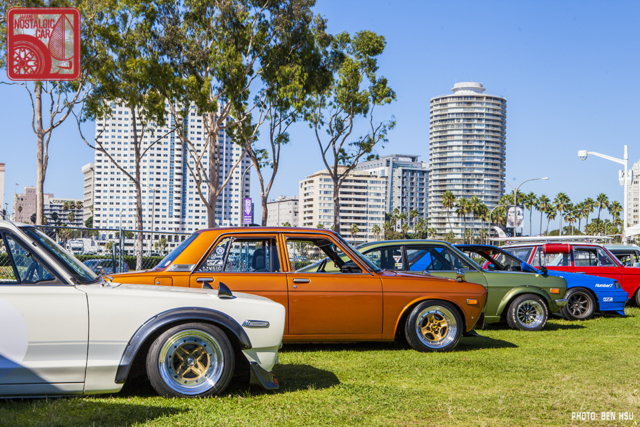 It’s become something of a tradition. The Wild Cards team rolls in like a storm with a gang of the show’s most stunning cars.  There’s always debut builds of the highest quality, but even many of their existing MVPs return with new looks to update the lineup. A stroll through their ranks never fails to excite, and this year was no exception. 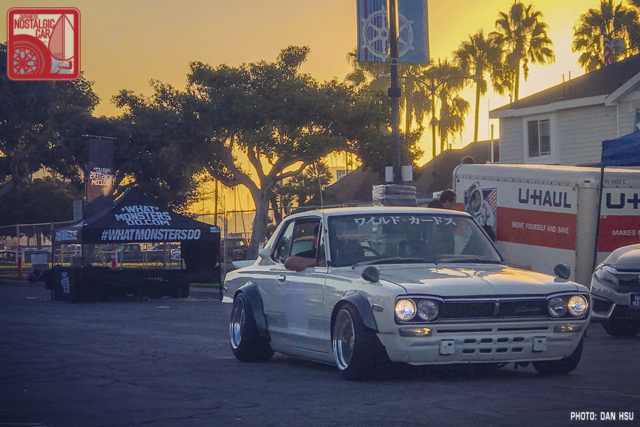 One of the first cars to catch our eyes during the dawn roll-in was none other than Roy De Guzman’s Hakosuka Skyline. We didn’t even recognize it at first because of its brand new livery. After all, if your car was recently made into a Hot Wheels you’d probably want to keep that look for a while. 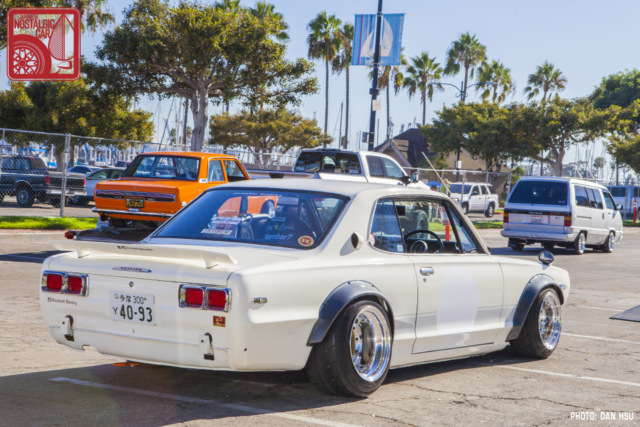 Not Roy. He’s stripped off the blue and black kaido racer scheme and applied a subtle silver stripe reminiscent of the GT-R’s touring car livery. It’s also the first Hakosuka in the US to rock a Pandem body kit, with its angular flares and front lip. Of all the Rocket Bunny kits this is probably the one that stays truest to the spirit of the original car. 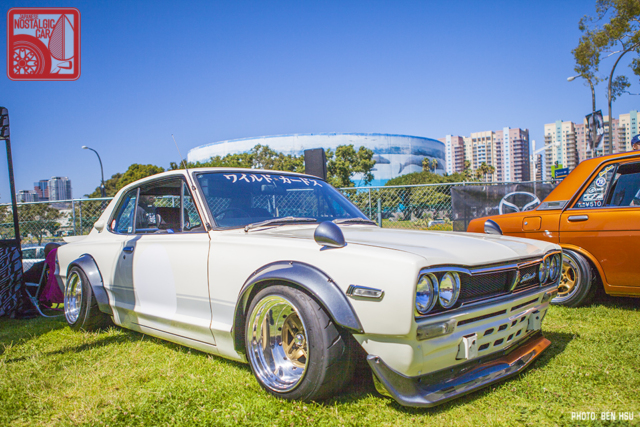 Filling out the flares are newly rebarreled Cross Fever wheels so deep a family of stray cats could live in them. It looks mean de-bumpered too, but we have it on good authority that the car won’t keep this look for long. 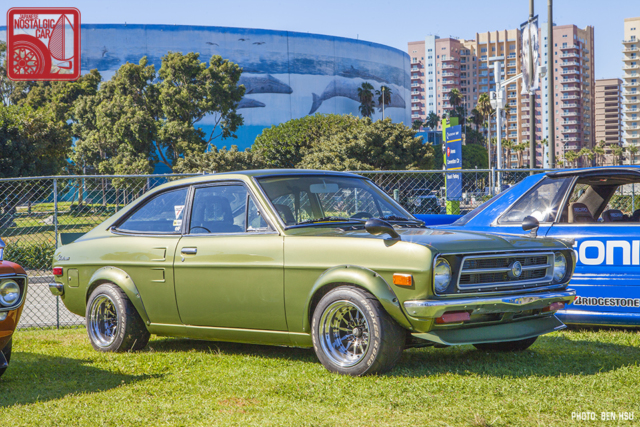 The newcomer of the group this year was Joe Mendoza’s 1972 Datsun 1200. The once ubiquitous Datsun coupes have all but gone extinct on US shores now, so seeing one at all is a treat. When one is as nicely done as this, it’s cause for celebration. 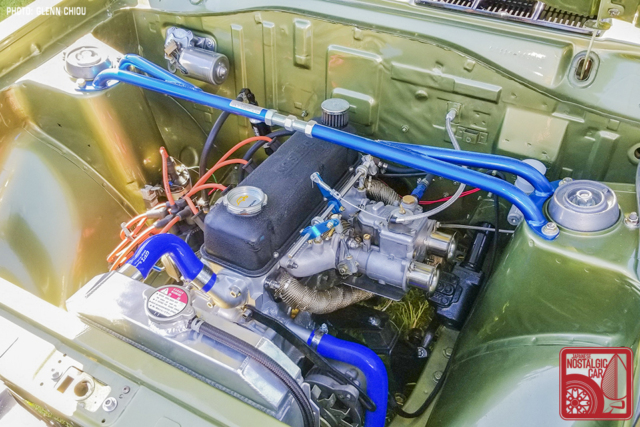 Under the hood we were happy to see that Joe kept it old school with an A-series motor, but updating the A12 bottom end with an A14 head with a street cam and fed by a Weber DCOE 18 through a Cannon single side-draft manifold. The transmission has been upgraded to a 5-speed 60-series transmission found in the late 70s B310 Sunnys, while a beefy Cusco adjustable strut bar ties everything together. 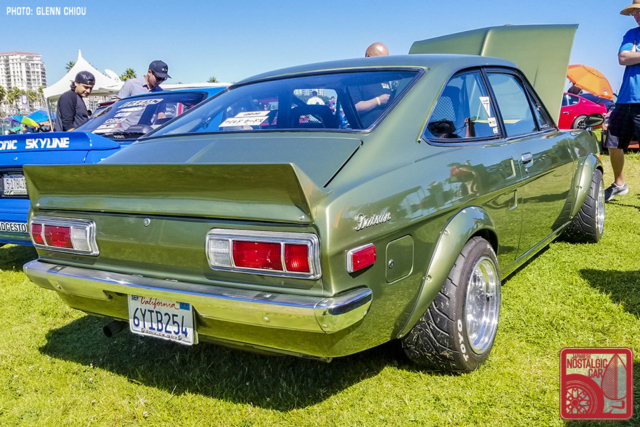 A properly sized set of 13-inch Compomotives wrapped in Toyo Proxes R888 rubber complete the look. Running 9-inch wide on the front and 9.5-inch wide on the rear, they fill out the fender flares with a hint of western-built flavor. The humble little Datsun quickly became one of our favorites at the show. 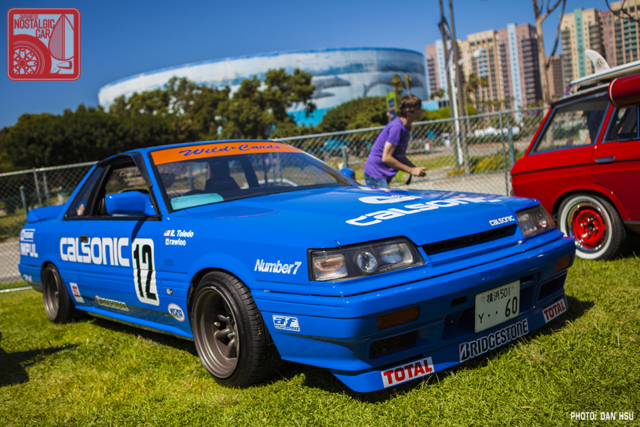 Raul Toledo’s R31 Skyline made an impact with its stunning Calsonic Blue livery over deep gunmetal Watanabes. Though one of the most recognizable graphic schemes in Japan, it is largely attributed to the Calsonic R32 Skyline GT-R that twice won the Group A touring car championships, but as JNCers know the first car to wear the stunning blue warpaint was Kazuyoshi Hoshino and Moto Kitano’s R31 GTS-R. 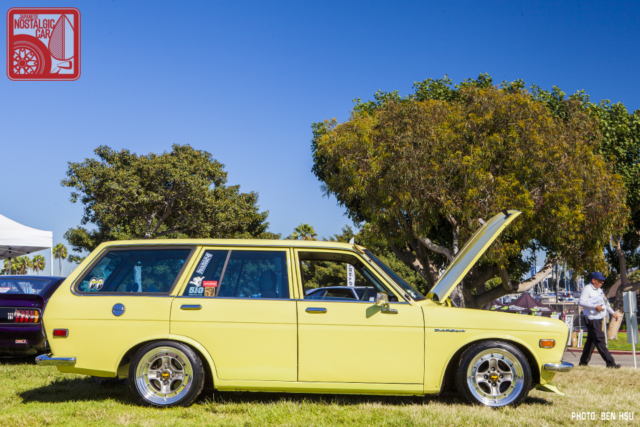 John Huckins’ 510 Wagon is a Wild Cards veteran, but since last year has been wearing Work Equip 40 wheels. It runs a built SR20DET with a Precision Turbo 4828B under the hood, but the trick aspect of this 510 is the 4-link independent rear suspension swapped in place of the stock solid axle. 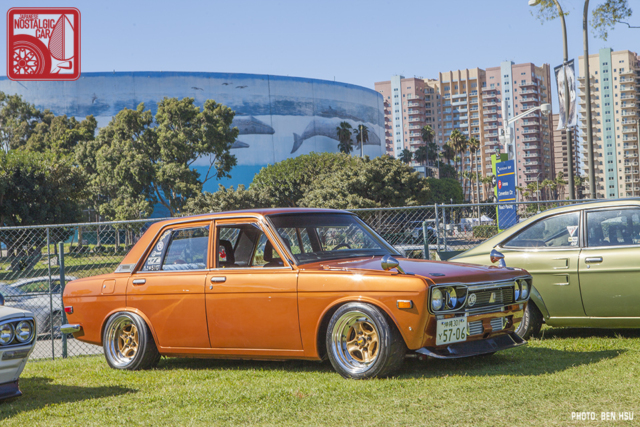 Gil Susana’s 1972 Datsun 510 sedan had the perfect combination of modern technology and aesthetic restraint. No expense was spared on the SR20DET underhood, which had been shot-peened, honed plateaued, ported and polished and then put back together with a host of tough internals from the likes of Tomei and Cosworth. There’s really too much to list here — you can read more about it here — but seeing it again reminded us why we gave it the official JNC Award last year. 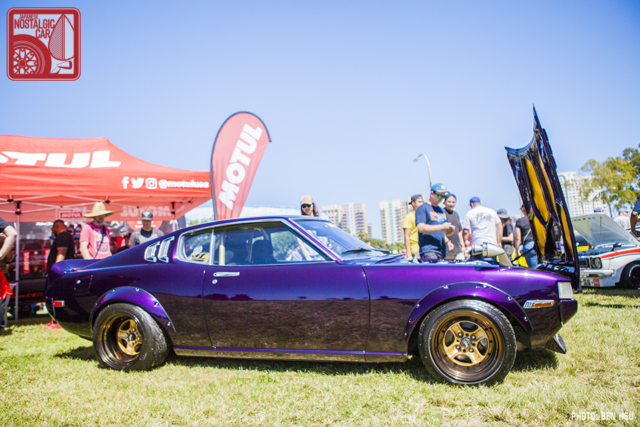 Last but not least was Dennis Kiyan’s 1977 Toyota Celica Liftback, the lone Toyota of the group this year. Its eye-searing purple paint job and massive Work Equip 40s under wide flares has the firepower under the hood to back up its looks, too. 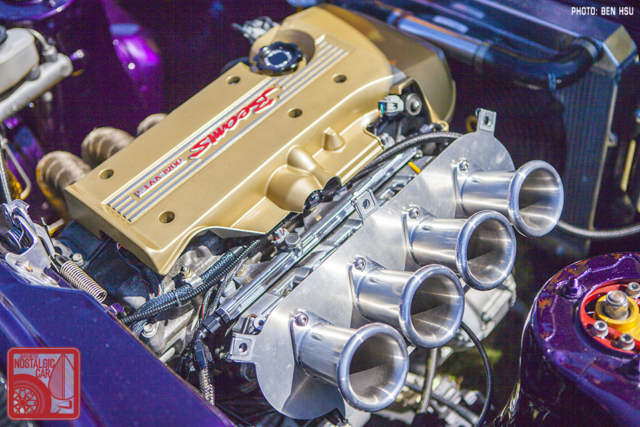 A Beams 3S-GE under with a bunch of Toda internals sits between ITBs and a custom header. A Koyorad aluminum radiator keeps things cool while a full Techno Toy Tuning suspension gives it its tough stance. 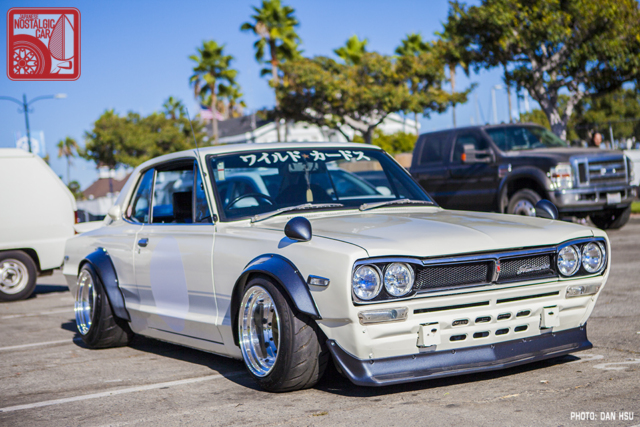 With their top-tier builds like these, the Wild Cards always manage to make a statement. We never tire of their cars, and the constant mix of old and new continue to elevate the stateside kyusha game.

4 Responses to JCCS Spotlight: The Wild Cards always turn up