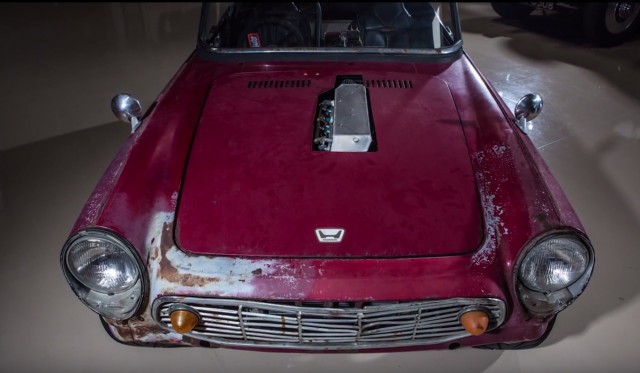 Talk about a dream touge build. Back in 2007, my brother from the same mother Ben and I were freezing our arses off in a drafty Nagasaki apartment dreaming about insane Japanese hot rods that we wanted to build. None was nuttier than a Honda S-chassis with a liter-bike engine. Why? Because at the time decrepit S600 shells were plentiful and worth nothing on eBay, we believed in only same-marque engine swaps, and we wanted above all to keep the spirit of S600 in tact. Of course, the unholy trinity of funds, space and time (or lack thereof) prevented it from happening. Fortunately Matt Brown made no such lame excuses and did this exact thing.

With the motor from a CBR1000RR, Brown mated its sequential shifter with a BMW motorcycle driveshaft and diff Frankenstein-ed with Miata half-shafts and hubs to replace the standard chain-driven trailing arms. What results is a 160hp (nearly triple the stock 57) music box that revs to a wailing 12,000 rpm. Oh, and there’s nitrous. We love the fact that Brown kept the mismatched panels, bondo and twisted grille to make it a true hot rod. Importantly, these touches were not artificially forced. There’s perhaps only one tiny detail we’d add: Honda wing logos on the fenders. Total cost of the project? About $5,000. If there’s a lesson to be learned here, it’s sit on your ass and let someone else build your dream car instead. No, wait, that’s not it at all.