This year’s JCCS was so big, so popular, so insane, attendees had to wait at least one hour just to get through the gates. Some gave up and went home (their loss). Word has it that the line stretched all the way to the Queen Mary, the big boat you always see in the background. It was simply huge, and proof that kyuusha kulture is growing!

Much hubbub has already been made about the sheer number of Datsun 610s in attendance. In actuality, there were five. Still, that’s more than anyone has seen in one place since, say, a Datsun dealership circa 1974.

Compare and contrast the previous with this Libre-shod hardtop minus safety bumpers.

But amazingly enough, there was yet another shakotan wagon with a rather interesting shift knob, if you can call a meter-long Sapporo beer tap a “knob” (see gallery below).

Speaking of the Heartbreakers, unless you lived under a rock last year you’ve seen Yuta Akaishi‘s Datsun 240Z. It now sports a slightly more refined (?) paint job and SSR MkIIIs, and it’s still a sight to behold.

Everyone has been asking which classic wheel Enkei would announce at JCCS, so without further ado, here it is — the Enkei J-Speed. We know it’s not exactly what kyuusha fans were expecting, but there will be Toyota and Datsun-friendly PCDs available. And oh yeah, Enkei has another, even older school wheel coming out.

For some reason, it’s difficult to imagine a three-spoke wheel looking good on a nostalgic, but somehow these Advan A3As on this daruma Celica just work. Excellent choice, and excellent stance.

Not that all the wheels we’ve mentioned above don’t look great, but Dom Stokes‘ Datsun 510 had the king of them all — Yayois, aka Sakuras. In fact, every detail on this 510 was as impressive as the wheel choice.

The car was built by Ray Stonehocker of Garage AutoHero in Woodinville, WA. It’s powered by an FJ20, a unique engine swap that gets points for its period correctness — it was a popular 510 swap in 1980s Japan — and valve cover done in HKS purple.

On paper, you wouldn’t think pink and metallic green go together, but like the Celica above, these wheels just work. And don’t let those cherry blossoms deceive you, there’s a completely reworked suspension lurking underneath. The craftsmanship and thought put into every detail of this car is astounding, which is why we gave this car the JNC Magazine Edtior’s Choice award. It also took home 3rd in the Modified Class and 1st in the Datsun 510 category. It is truly one of the best 510s we’ve ever seen. Congrats, Dom and Ray. Read more about it at Motormavens and in an upcoming issue of JNC!

Speaking of Bluebirds, the Datsun 411‘s softer lines usually make for a less aggressive car than the hard-edged 510, but this 411 on Enkei 92s looks pretty darned mean! Vintage driving lights are a nice touch.

PJ Bonifacio‘s corner has always got a few surprises in it, and we were pleasantly surprised to find a Toyota Celica on ATS Classics.

Another car catching a lot of attention was JNC forum member Oracles‘ MX23 Toyota Corona Mark II. Amazingly, it had a complete Lexus IS300 dash and was powered by a powered by a turbo 2JZ. It won 2nd overall for Best in Show.

Last but not least, here is TORC president Joji Luz and his newly restored Toyota Sports 800, holding the Mooneyes Moon Disc trophy that is awarded to the Best in Show. For those who don’t know, this Publica-based T-top two-seater was Toyota’s first sports car (before the 2000GT). Congratulations, Joji! 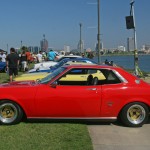 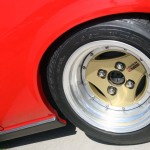 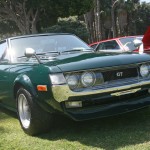 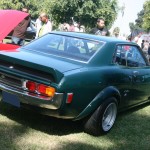 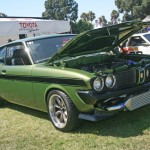 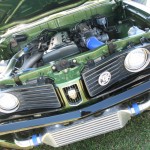 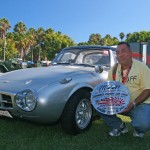 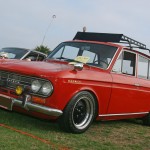 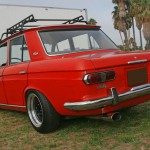 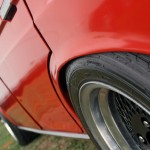 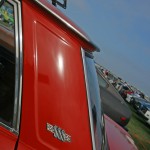 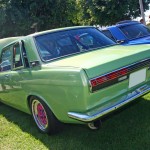 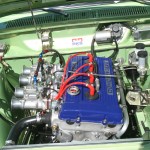 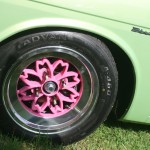 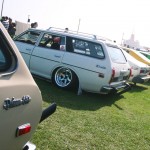 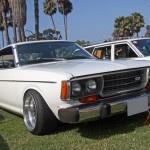 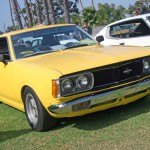 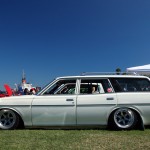 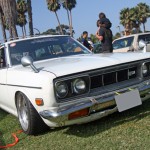 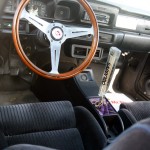 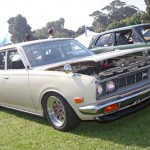 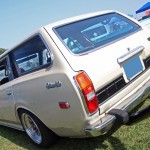 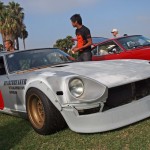 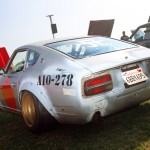 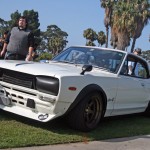 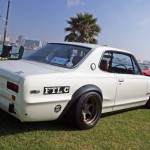 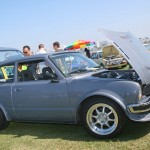 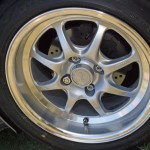 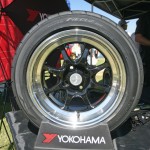