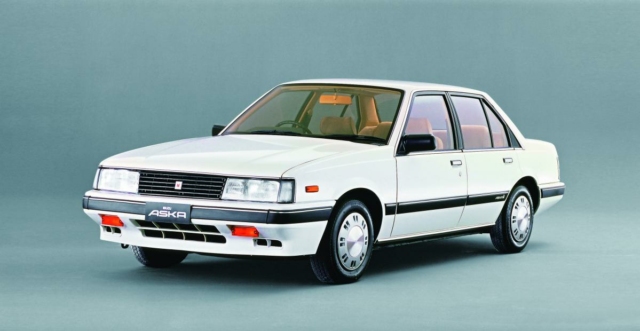 Every Earth Day we highlight a hybrid or alternative fuel concept car from Japan’s past. Back in 1985, long before the Prius was a twinkle in Toyota’s eye, Isuzu revealed a hybrid compact sedan at the Tokyo Motor Show. The Isuzu Ceramic Aska was not only an early hybrid but, like its name implies, powered by an experimental ceramic engine. 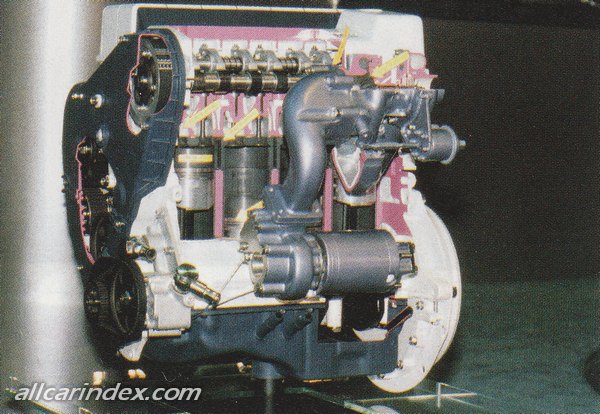 By most accounts the Isuzu Aska was not a particularly remarkable car. It was developed in conjunction with General Motors as part of their “world car” platform.  As such, it shares some components with such automotive luminaries as the Oldsmobile Firenza and Cadillac Cimarron.

Some trim levels came with a novel self-shifting manual transmission and a turbo-diesel engine, but that’s a story for another day. After one long generation from 1983-90, Isuzu backed away from the passenger car market. Subsequent Askas were simply rebadged Subaru Legacys and Honda Accords, making the nameplate an often dismissed footnote in automotive history.

However, the Isuzu Ceramic Aska took a prime spot at the company’s stand at the 1985 Tokyo Motor Show. Toyota had just stopped development of its gas-turbine hybrids a couple of years earlier, so Isuzu had a chance to stake a claim in the field. Powering the concept was a diesel engine lined with a ceramic coating and turbos that helped charge an electric motor in a very rudimentary hybrid system. 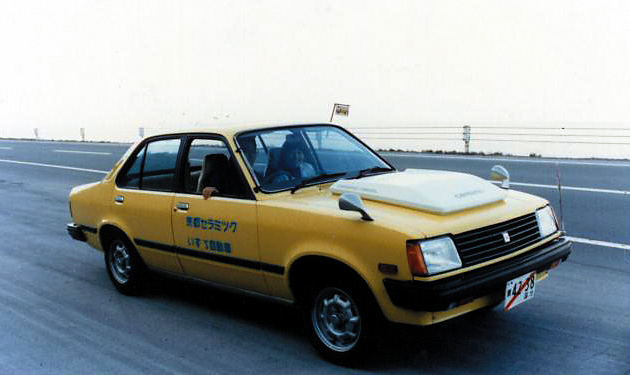 Many companies at the time had been researching ceramic insulated engines as a way to reduce engine temperatures. Isuzu had established the Isuzu Ceramic Research Institute and partnered with ceramics firm Kyocera (maker of kitchen knives, among other things) to build a running prototype based on a Gemini. Engineers test drove it along the Kinko Bay coast in Kyushu in 1982, and the technology was considered groundbreaking enough that NHK broadcast the trial.

The public debut of their years of research arrived with the Isuzu Ceramic Aska on the Tokyo stage. Isuzu’s expertise had always been with diesels, so a four-cylinder, likely the company’s 2.0-liter 4FC1, formed the base. Then, Isuzu and Kyocera developed a silicon nitride glaze for the cylinder linings, pistons, and head. The engine reportedly operated at only a quarter of traditional diesel temperatures. It ran so cool, in fact, that the cooling system could be tossed out altogether (an aspect the US military was conducting its own ceramic research in, as radiators were considered a weak point because they could be shot out). 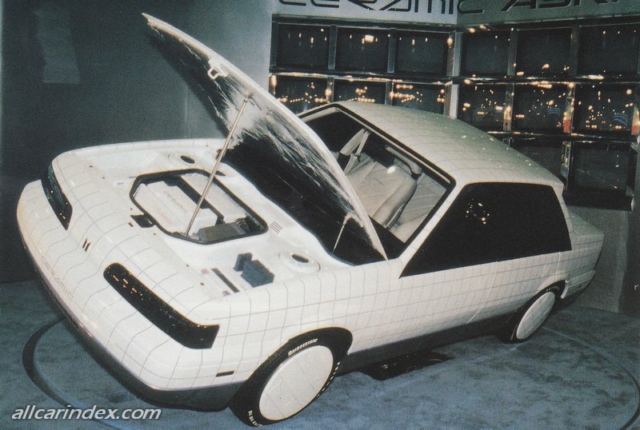 As a result, Isuzu removed the front grille entirely, giving the Aska an early Infiniti Q45 vibe thanks to visored headlights. That helped reduce drag, and the Ceramic Aska reportedly had a coefficient of drag of 0.31, less than a Porsche 944S’s 0.35. In addition to cooler temps, the engine experienced less stress from heat expansion, reduced noise, and improved cold-start performance.

To highlight its novel powertrain, Isuzu painted the body in a white tile pattern like that of the space shuttle (or a bathroom wall). The pattern even spilled over to the wheels, reminiscent of other Isuzu rims.

While the ceramic technology may have taken spotlight, the Aska had another innovative technology. Isuzu fit the engine with a turbo, but rather than using exhaust gases to compress incoming air, the turbine charged a small electric battery. The battery powered a motor that made an extra 13-14 horsepower, adding to the car’s total of 80.

That doesn’t recapture nearly as much energy as today’s hybrids with their regenerative braking, but it was a clever solution given Isuzu’s turbodiesel know-how at the time. In fact, one turbodiesel-powered and intercooled Aska at the time boasted 148 horsepower, and combined with the Aska’s approximate 2200-pound weight, could run the quarter-mile (well, 0-400m, actually) in just 15.3 seconds.

Ceramic-coated motors were once thought of as one of the many “engines of the future” that litter the roadsides of history. Toyota, Mitsubishi, and Mazda were all researching the technology at the time, but none built a ceramic-themed show car. Even as recently as 2008, ceramics were still being touted as something we’d see in the near future. Manufacturing difficulties proved to be too great to overcome, though, and now with the future looking increasingly electric, further development of ceramic engines is unlikely.