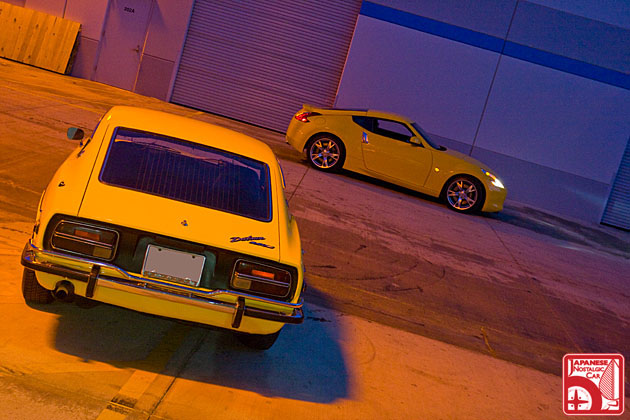 Here’s a sneak peek of what we think will be an awesome article in the next issue of Japanese Nostalgic Car magazine. When Antonio Alvendia of Cipher Garage told us he was shooting a 2009 370Z for Speedhunters‘ Nissan month, we knew we had to put it side by side with its great grandfather, the Datsun 240Z! 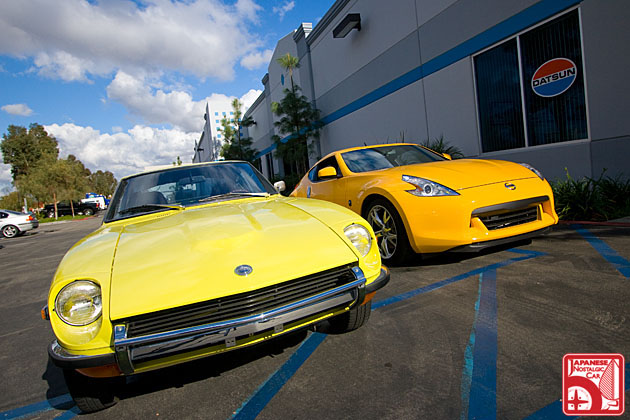 So we called up the Datsun Heritage Museum, which has a bright yellow one-owner 1971 240Z in their collection.

Easy peasy, right? No way. This photo shoot almost didn’t happen at all. Here’s a glimpse behind the scenes: First, the car was delivered late because a big shot car magazine that shall remain nameless kept the 370Z almost a day longer than they were supposed to. Then, we nearly got rained out because of some freak precipitation in otherwise sunny SoCal.

After much rescheduling with museum curator Fred Jordan and the 240Z’s gracious owner, Kay Milton, we decided to take a gamble during a break in the rain. 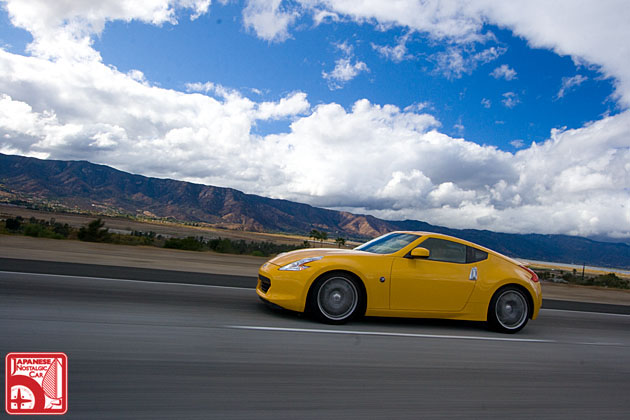 We were off! The 370Z is fast. With 332hp on tap and a 3,232-pound curb weight, we had a hard time keeping up as it sliced through freeway traffic like a scalpel. Admittedly, our chase car was a 1986 Cressida station wagon. The original 240Z weighs about 1000 pounds less than the new 370Z but has only 150hp (still an impressive amount for its time).

We mentioned before that the new Z looks much better in person than it does in pictures. Apparently, it can look good in photos too, just not the ones Nissan initially released. And I’m not simply saying this because Dan’s my brother. Compare the image above with this. 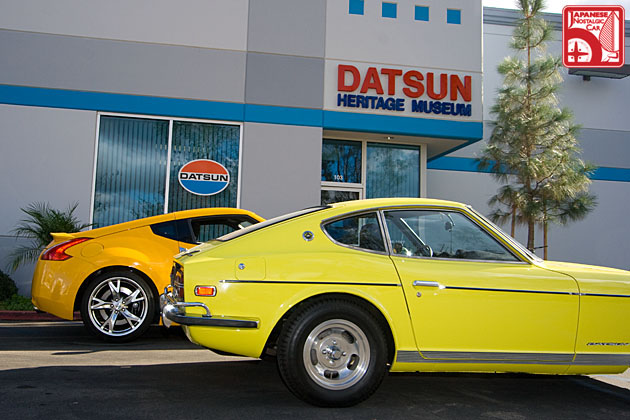 When we arrived, the 240Z was waiting. The 370Z looks much closer to the 240Z than the 350Z did. As noted many times before, the C-pillar treatment really connects the lineage in terms of styling.  We prefer the graceful slope of the 240Z’s roofline to the 370Z’s aggressive slice, but we love that Nissan acknowledged one of the design cues of the original. 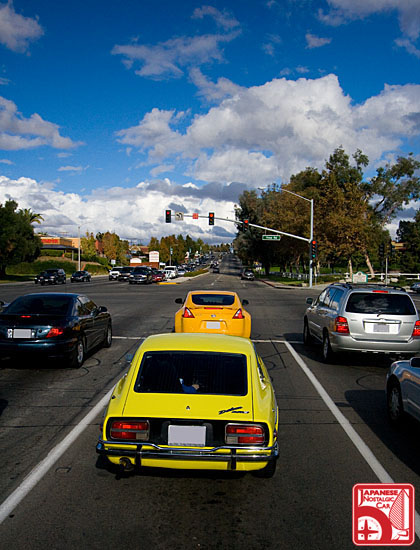 We headed towards the nearby Temecula wine country in search of some scenic backdrops.

Parading down public roads in a yet-unreleased 370Z wearing Tennessee manufacturer plates and a classic 240Z – both in ultra-loud yellow – turned quite a few heads.

We had to move quickly, though, before those ominous clouds drifted our way.

In this shot, you can see that the 240Z’s rear quarter panels flare out ever so slightly in beautiful, timeless proportion. The 370Z’s haunches are massive in comparison, giving it the ability to stay firmly planted to the ground, no doubt. From this angle it reminds us a bit of Pac-Man. 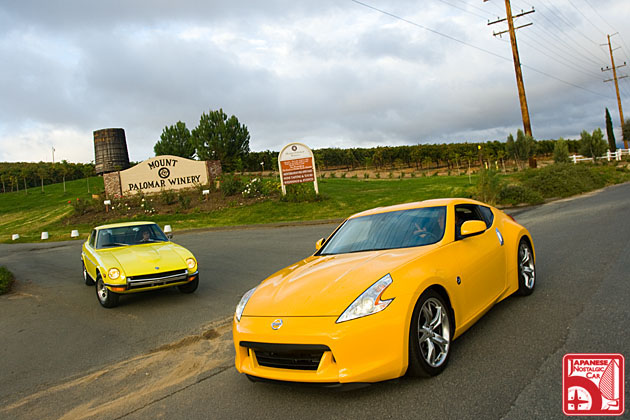 If you look hard, you can see the similarities in the grilles. On the other hand, the 240Z’s hood has a power bulge while the 370Z’s has, um, a power depression. It’s funny how notions of sporty design have changed in 38 years. The new Z’s arrowhead head and taillights have grown on us as well. The “sugar scoops” on the 240Z are nice, but surely not as aerodynamic as the 370Z’s nose. 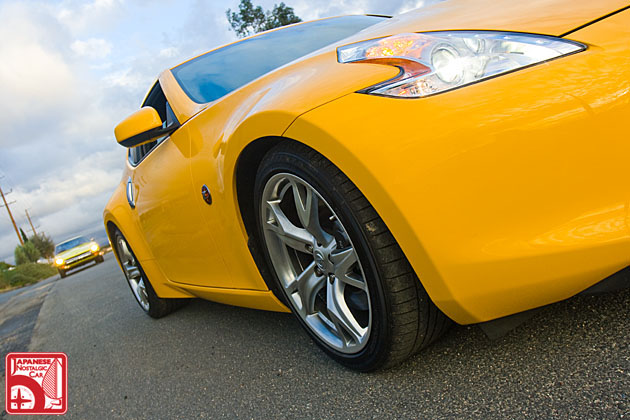 The 370Z sits much lower to the ground than the 240Z. The 370Z’s optional 19-inch Rays forged wheels are a work of art, sculpturally, though their jaggedness may distract from the smoothness of the 370Z’s lines. 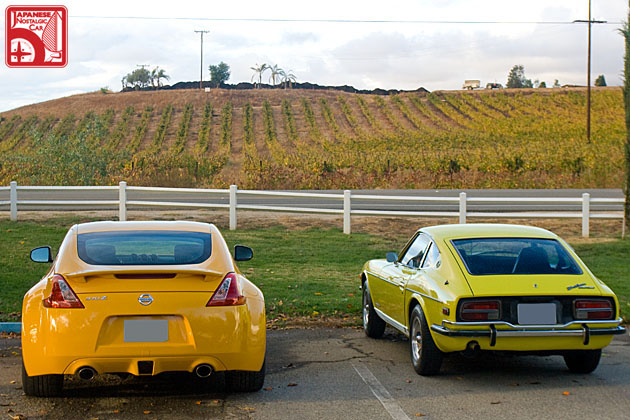 Here’s a side-by-side comparison so you can see how the Z has grown over the decades. The 370Z is just about an inch taller than the 240Z, but 8.5 inches wider. While we were in this parking lot, someone even stopped to ask Kay if the 240Z was for sale. Denied! Funny, he barely looked at the 370Z at all. 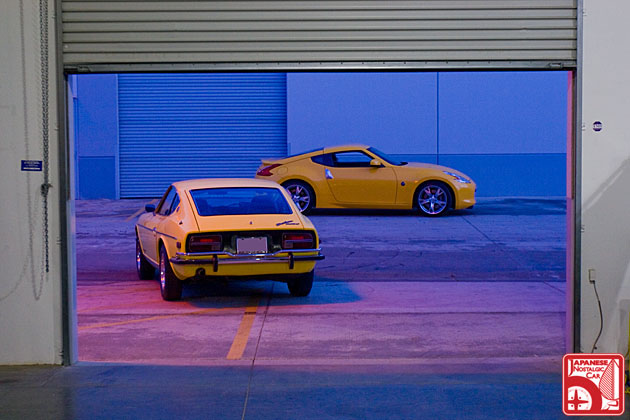 By the time we got back to the museum it was dark. Damn you, daylight savings time! We wanted to take more photos but there just wasn’t enough sunlight in the day. We admit that when we first saw photos of the 370Z, we were disappointed. But the more time we spend with it, the more we realize it’s a worthy successor to the 240Z.

We want to give a big thanks to Antonio Alvendia for taking time out of his short stay with the 370Z to help us put this story together; the ultra-patient Fred and Betty Jordan for putting up with our constant rescheduling and keeping the Datsun Heritage Museum open for us; and Kay Milton for letting us take her baby out for a photo shoot!

Here’s more on the Datsun Heritage Museum. Also Be sure to check Speedhunters for Antonio’s driving impression, design comparo and wallpaper. And stay tuned for Japanese Nostalgic Car Issue 3 for our full article and more pics!