Is Your JNC Sticker Real? 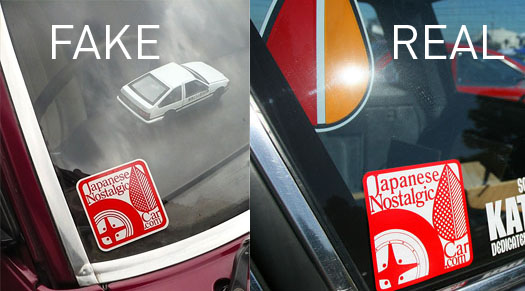 Look what we spotted on our Facebook page – someone tagged JNC in a pic of a car sporting a fake series 1 JNC sticker!  The picture hails from Indonesia, so we don’t have any solid info on the counterfeit piece but the most popular theory here at JNC is that an underground Indonesian crime syndicate is making millions by printing and selling these phony stickers to unsuspecting nostalgic enthusiasts in dark alleys and abandoned garages.

If you think a friend or family member might have fallen victim to Fake Sticker Syndrome (FSS), send a picture of the suspected sticker to feedback(at)japanesenostalgiccar(dot)com and our team of experts will pour over every detail, and notify you of the diagnosis.  If the worst case scenario turns out to be true, seek help immediately.  With proper treatment (available here) even the most severe cases are curable.

56 Responses to Is Your JNC Sticker Real?