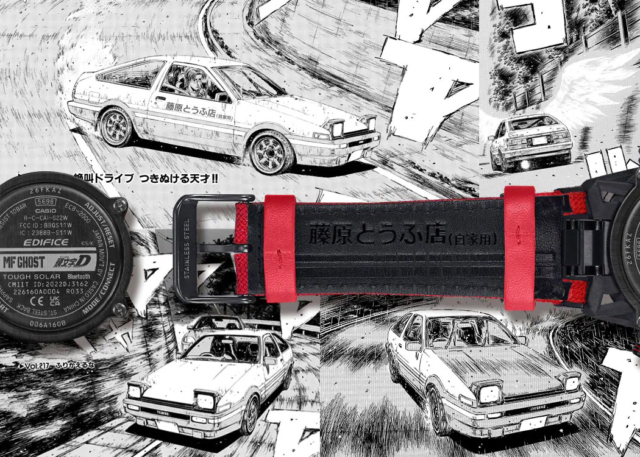 Expensive motorsports-themed watches are nothing new, but typically they involve a Formula 1 team or some kind of luxury brand tie-in. Now there’s a watch — ahem, timepiece — for the lone wolf mountain racer in a humble Toyota. The publishers of Initial D and MF Ghost have teamed with Casio Edifice for an official watch — ahem, chronograph — celebrating the touge battle manga. 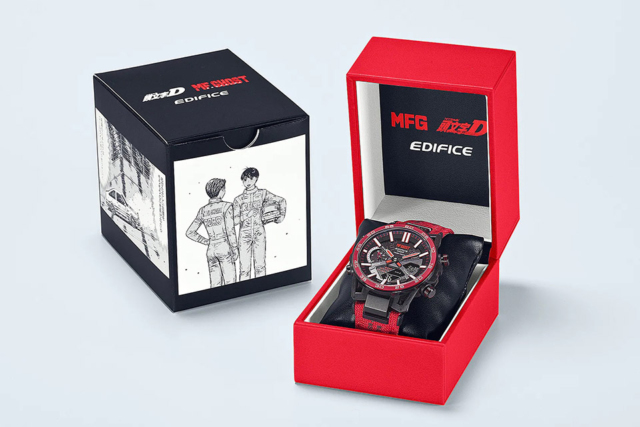 Though the watch is coupled with both titles, the colors clearly lean toward MF Ghost, which stars a red and black ZN6 Toyota 86. Images of the characters and of the original AE86 sliding down a narrow pass adorn the box. 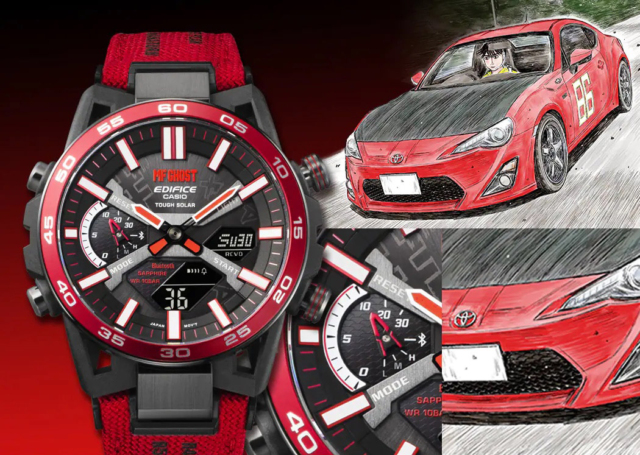 Casio says that the face design is inspired by the tachometer and grille design of the real 86. A faint honeycomb pattern detail lines the smaller dial. Elsewhere on the face giant cartoon katakana used to denote sound effects in the manga can be seen. There’s also text announcing every feature the watch has, from “Tough Solar” batteries to “Bluetooth”. That seems excessive but perhaps no different than the original AE86 proudly announcing “Twin-Cam 16” on is flanks.

The strap is made of Cordura nylon fabric and is printed with the names of the various race tracks of MF Ghost — Odawara Pikes Peak, Ashinoko C1, Peninsula Manazuru, Seaside Double Lane, and Atami Ghost.

The reverse side of the straps are a nod to the Initial D, with the Fujiwara Tofu Shop logo seen on the door of Takumi’s AE86 and a tire imprint on the band loop. The other strap has more of the stylized katakana for the sound of squealing tires.

The reverse side of the carbon reinforced case has laser etched logos of the Initial D and MF Ghost titles, while the lugs are said to have a design inspired by race car suspension. This seems like a stretch, as the AE86 doesn’t have any of that underneath it, going with a simple strut and live axle combo, and the 86 has only a single upper wishbone at each rear wheel.

The watch illuminates as well, though its bluish white light doesn’t really match the greenish-yellow of the AE86 or the orange of the 86. If this piece of man-jewelery calls out to you, it’s available for pre-order starting November 1. It officially debuts on November 11 and will retail at ¥49,500 (approximately $340 USD).