Dreams and Sawzalls: How the Mitsubishi 3000GT Spyder was made

The Mitsubishi 3000GT Spyder was the first modern car to offer a power folding hardtop convertible roof. The option was a big deal in 1995, adding anywhere from $22,000, or the price of a new Acura Integra, to the cost of a fixed-head 3000GT. That seems astronomical (and it was), but it makes a bit more sense when you see the amount of work that it took to make these cars.

Prior to the 3000GT Spyder, the only car to offer a power hardtop convertible was the 1957 Ford Skyliner, but that system wasn’t that complex. It basically swallowed the whole roof, like a sideways L, into a cavernous rear-hinged trunk the size of a hot tub. To understand just how trick the Spyder’s roof was, check out this Motorweek review from September 1995.

This is what happened when you pushed a single switch on the center console:

Total time: 35 seconds. All of this was accomplished, says Motorweek, with four electric motors, four hydraulic actuators, and a 64-kilobite computer. That’s 0.000025 percent of the memory of an iPhone 11.

All 3000GT Spyders were built by American Sunroof Company, which was responsible for many a convertible conversion in the 80s and 90s. Everything from the Pontiac Firebird to the Porsche 944 droptop was built at its Long Beach, California shop. In 1995 Motorweek was given a tour of the facility by a Mitsubishi spokesperson with the absolutely brilliant name of Joe Jacuzzi (who may have had a cousin working for Isuzu).

The 3000GT Spyders started life at the factory alongside 3000GT coupes, but rolled off the assembly line with beefier springs and dampers to compensate for the weight. They never received a rear hatch or quarter windows, since those would have to be removed anyway. For the long journey across the Pacific, they were shipped with giant plastic covers to protect the interiors.

Once they arrived at ASC, the doors were removed, wrapped in giant protective bags, while the remaining panels were masked off. Techs with plasma cutters then used a steel template to cut off the rocker panels so they could slide a box frame reinforcement into each side and weld them in, adding 110 pounds to the chassis.

Next, all interior trim aft of the dash was removed to make way for the sawzalls slicing off the roof, B-, and C-pillars. Shear plates were then welded behind front and rear fenders, reinforcements tacked onto the windshield hoop and cowl, and a massive U-shaped support structure added between the rear strut towers. Everything was sprayed with a matte black rust-resistant coating not unlike a slightly finer Rhino-liner.

The top was manufactured by ASC out of lightweight steel and weighed 98 pounds. It was installed along with the aforementioned computer, motors, actuators, and a web of cables and hydraulic lines. With the interior replaced and affected body panels presumably paint-matched, ASC would test the cars for leaks and rigidity. The whole process took 12.5 hours.

In total, all the equipment and reinforcements increased the curb weight by 342 pounds. For a VR-4 Spyder, that meant a portly 4,123-pound curb weight, but Motorweek was still able to wring out a 0-60 time of just 5.4 seconds. A non-Spyder VR-4 was tested at a supercar-esque 4.8 seconds. 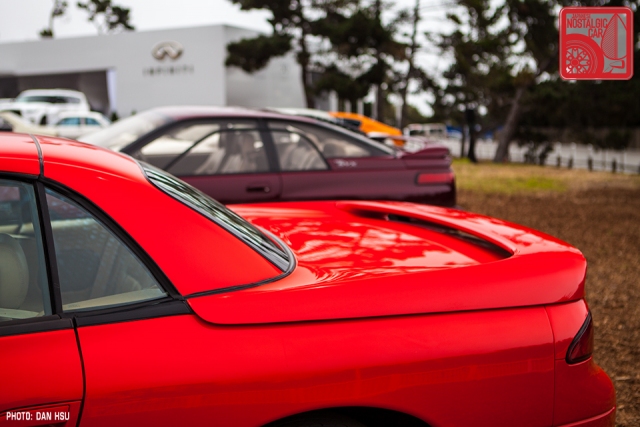 The cost of a fully-loaded VR-4 Spyder was $68,766, a number that seems positively insane in 1995. It’s even crazier when you consider that it’s the inflation-adjusted equivalent of $117,400 today. Can you imagine paying six figures for a Mitsubishi today?

Despite the stratospheric price tag, Motorweek reported in September 1995 that all 3000GT Spyders were sold through the end of 1996. Turns out, 1996 would be the final year of the Spyder, as the bursting of Japan’s bubble economy finally caught up to carmakers.

Given what we know of other ASC products we wonder if the 3000GT Spyders have held up over time. ASC-built Nissan 240SX convertibles usually began to reveal the shoddiness of their workmanship and materials after five or six years. That might not be the case for a flagship car costing twice as much, and we’d be happy to be proven wrong.

Even if it’s imperfect, the 3000GT Spyder is still a significant marker in automotive history. It was an almost irresponsibly ambitious project for Mitsubishi, but that’s exactly what makes it cool. What kind of machinations did it take to push a 4,000-pound, $65,000, AWD, 6-speed, 320-horsepower hardtop convertible past the beancounters? It’s the kind of spirit absent from mainstream carmakers these days, but even Mitsubishi once dared to dream.

permalink.
This post is filed under: Bubble Era and
tagged: 3000GT, gto, mitsubishi.

12 Responses to Dreams and Sawzalls: How the Mitsubishi 3000GT Spyder was made