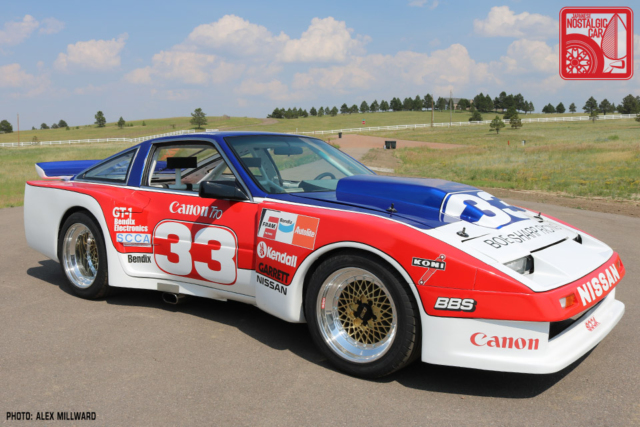 We at JNC have been known to love the third-generation Z-car, although it’s kind of a neglected stepchild of the line. Even Nissan themselves sometimes forgets about them. However, our appreciation of the Z31 is nothing compared to Colorado resident Alex Millward’s, who takes devotion to this one chassis to a whole new level. 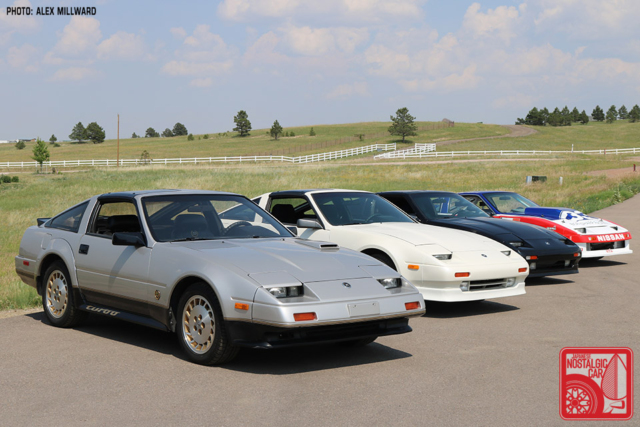 Alex has owned several Z31s throughout his life, starting with a black 1989 Turbo that was his very first car. Since then, his collection has expanded to include a 1984 50th Anniversary Edition and a 1988 Shiro Special. Now he owns four highly sought-after Z31s. His collection of Z31 toys ranges from Micro Machines to Hot Wheels to larger scale R/C cars, wowing even the most obsessive Z historians. 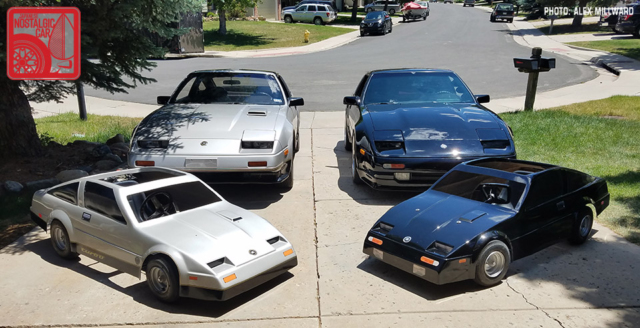 He’s even remade a Nissan Z31-shaped go-kart, large enough for a full-sized adult, that was used for marketing in the 80s. At this point, Alex is such a guru of the chassis that Z31 collectors send cars to him for repair and restoration. However, it’s his latest project that is one of the rarest Z31s of them all. 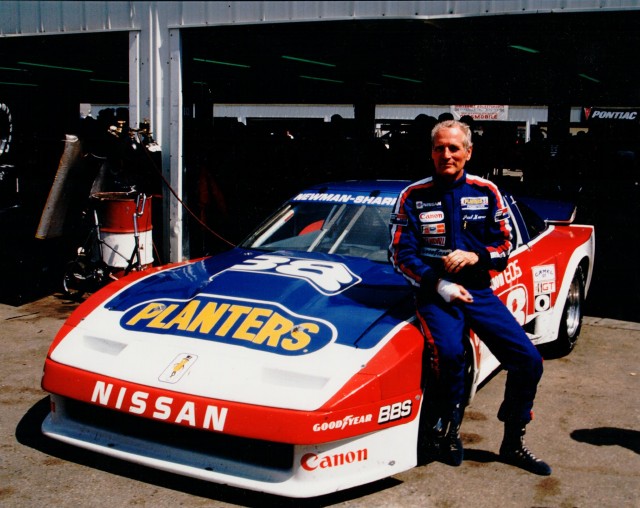 Back in the mid-80s, Nissan was heavily involved in American road racing, campaigning the 300ZX in the heavily contested IMSA GTO class. As those race cars — driven by the likes of Paul Newman (and today collected by Adam Carolla) — evolved, they became more powerful and thus required more aero in the form of bulging widebody kits and downforce-generating spoilers. 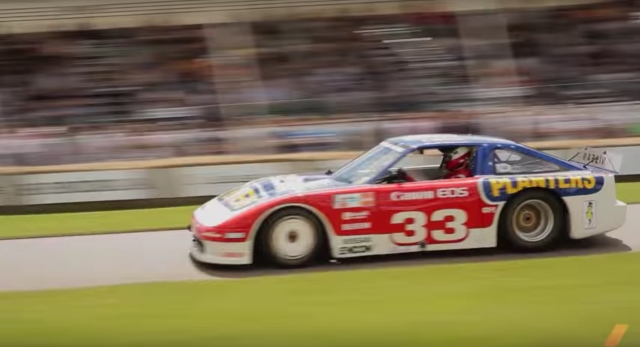 Naturally, Nissan hoped these racing machines would link to their road cars, and created a couple of examples out of street legal 1986 300ZXes. They featured full interiors on the inside, but wore the IMSA racers’ extreme bodywork on the outside. These cars were used for promotional purposes or as photo cars for magazines, helping bring the excitement of Nissan’s IMSA racing to the public. Alex had found pictures of similar examples displayed at car show, but according to a Nissan representative working for the company today, these cars were never meant to be sold to the public. 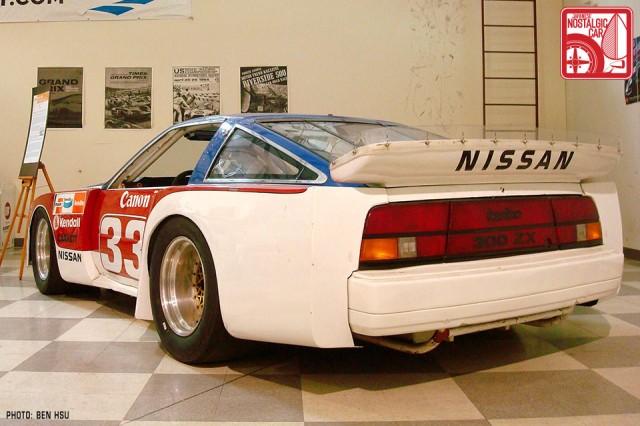 However, the representative also revealed that back in those freewheeling days, things at Nissan USA had a tendency to walk out the back door. Of course Alex wanted one, and according to his research there are two known to exist but he didn’t know how to track them down. Then, one day he heard through the grapevine that there was one was sitting abandoned at a repair shop in New York. 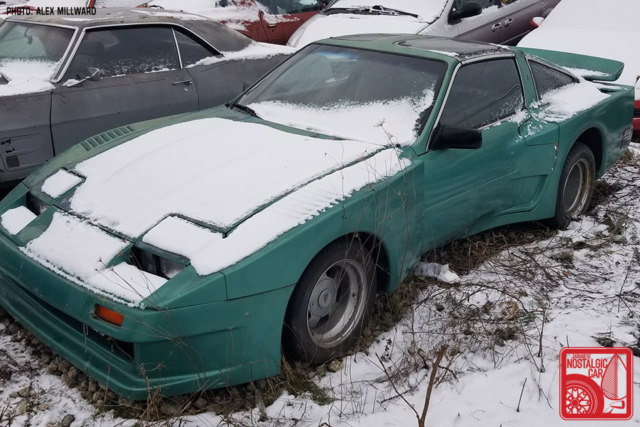 Alex seemed like the rightful owner for a car like this, but the impetus of the project was also borne from tragedy. Alex lost his young son Alex Jr. around this time, and reviving this rare Z31 allowed him to keep his mind off of his loss. 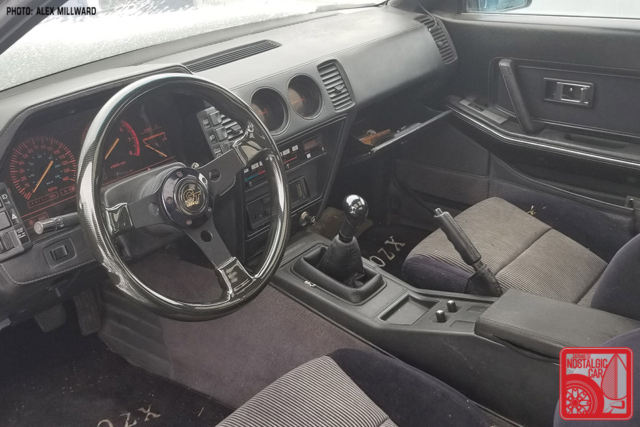 Finding it difficult to secure a shipping company willing to pick up a non-running vehicle, Alex took it upon himself to fetch the car. Unfortunately, during the road trip from Colorado to New York, Alex hit a patch of black ice and totaled his 2016 Nissan Titan XD Platinum Reserve Diesel tow rig. Alex was okay, but the accident delayed his progress for about a month. Eventually, he replaced the truck with an identical 2017 model and resumed the trip. 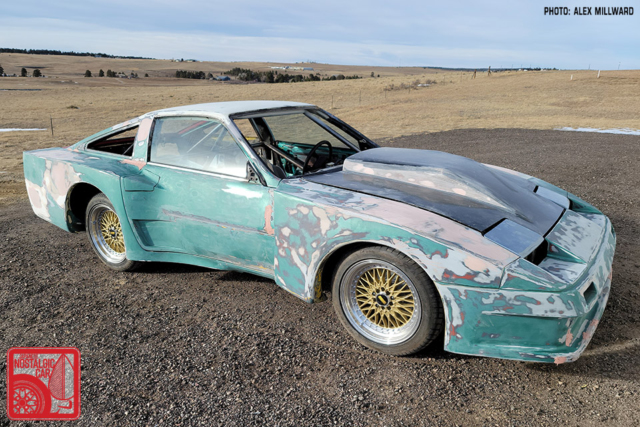 Upon returning to Colorado successfully, Alex began the painstaking work of acquiring parts. Over the decades, it had been altered quite a bit, painted and repainted multiple times, the last coat being a Statue of Liberty-esque pale green. Alex debated how to best represent the IMSA-inspired Z31, simultaneously wanting to stay true to Nissan roots while challenging himself to new levels.

After all, he’d already built the VG33 in his ’89 Turbo to deliver approximately 700 horsepower to the rear wheels. The purpose there was to prove that the Z31’s V6 could reach the massive power while retaining factory cruise control and working AC. 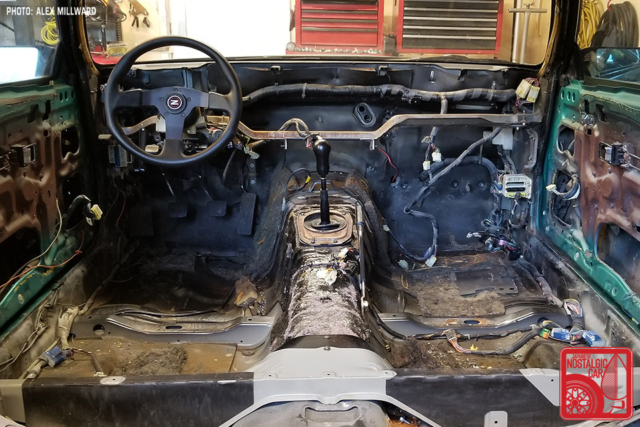 With the widebody, it was time for something different. Alex settled on a twin-turbo V8 from a Nissan Titan. Not only was the VK56 Nissan’s biggest motor yet, the all-aluminum, 5.6-liter, DOHC 32-valve V8 was a perfect foundation for the extreme Z31. 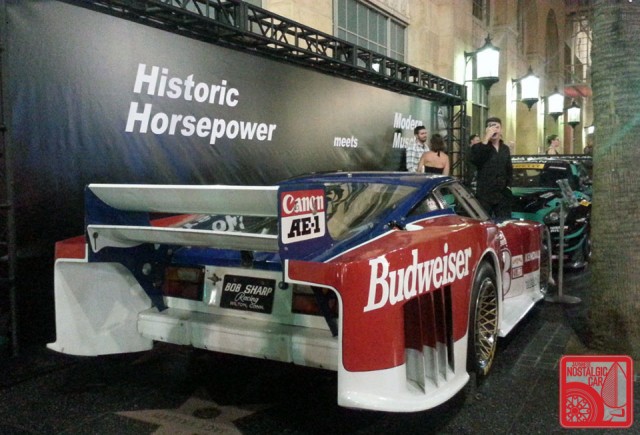 While it’s true that the IMSA Z31 race cars employed a turbo VG30 V6 setup, there was precedence to a V8-powered Z. Back in the early 80s, Bob Sharp Racing, which Newman drove for, had built and raced in IMSA a 700-horse 280ZX powered by a twin-turbo 4.5-liter V8 from a Nissan President. Plus, Alex wanted to build something that could rival the popular Chevy LS swaps while keeping it pure Nissan. 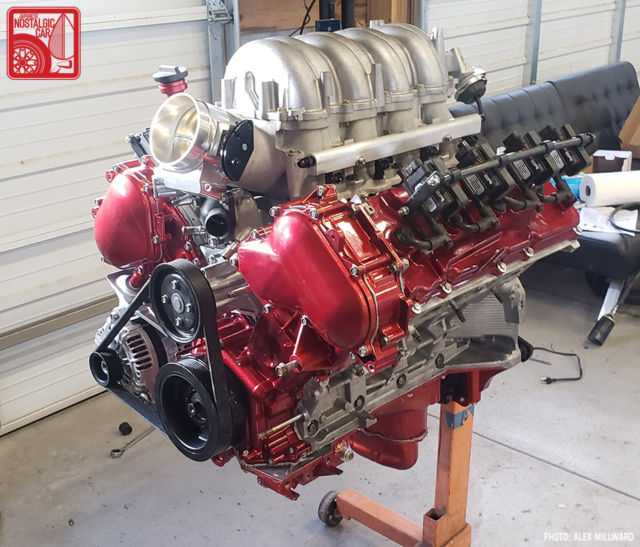 Factory specs for the motor are a modest 305 horsepower and 379 lb-ft, but Alex had plans to go quite a bit higher. And rather than running an ongoing project car by replacing and adding parts as needed, he decided to go all-in the first time. This meant that the engine, turbo, fuel management, powertrain, and suspension all had to be engineered together before Alex dug into the car.

Starting with the V8, Alex fully built the VK56 with coated CP pistons, forged Brian Crower Rods, Schneider Racing cams and valve springs, and ARP main and head Studs. The plastic factory intake was chucked in favor of an aluminum unit from the Infiniti VK45. Its variable intake runners provided the ability to churn out low-end torque and build boost. After a set rpm, valves switch to short runner for maximum airflow. Smooth velocity stacks at each port to help with the transition of air as well. 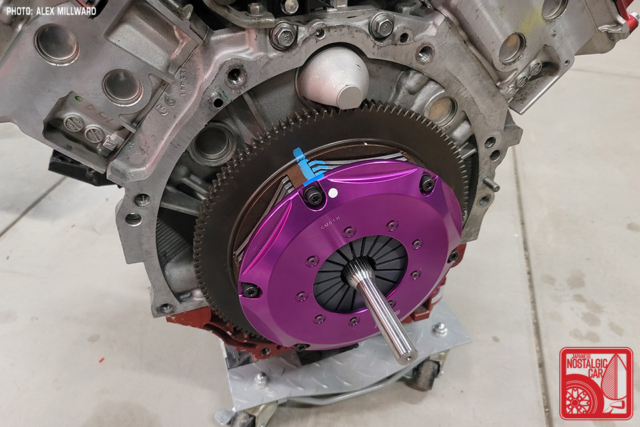 Mated to engine are mirrored dual-ball bearing Precision Turbos and a full standalone MegaSquirt 3 Pro on a custom PNP harness. The prodigious power gets fed through a  Tremec Magnum-F transmission and Exedy Hyper Builder triple-disc ceramic clutch, through a custom aluminum driveshaft and into a 20-clutch Nissan 350Z NISMO GT Pro CLSD, and out to the wheels via Z32 and Q45 combination axles. 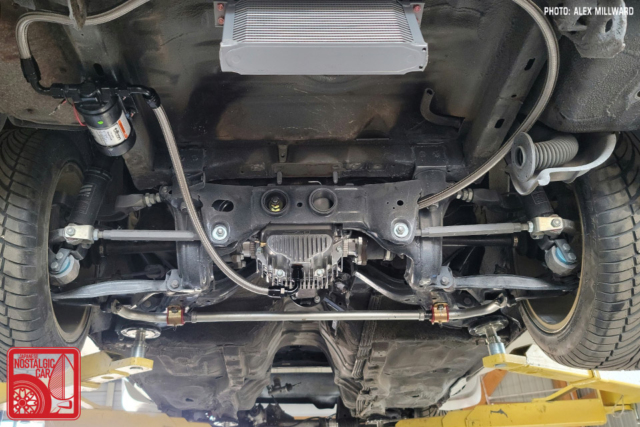 It’s quite a robust setup, made possible by installing an S14 rear multi-link subframe. Using a popular model’s rear suspension opened the doors for a lot more parts availability and geometry adjustments. 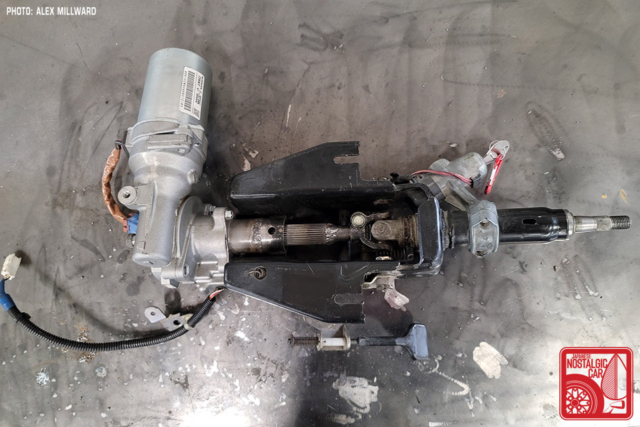 While it was possible to utilize the Titan power steering pump and lines, it would have been difficult to fit them into an already tight space consumed by the turbo setup. A growing trend is to swap an electric power steering systems from cars, and for Nissan’s that donor is the Versa. Proving that Versas are good for something, Alex merged the factory Z31 steering column with the Versa’s electric assist column, a tidy solution that didn’t take up valuable engine bay space. 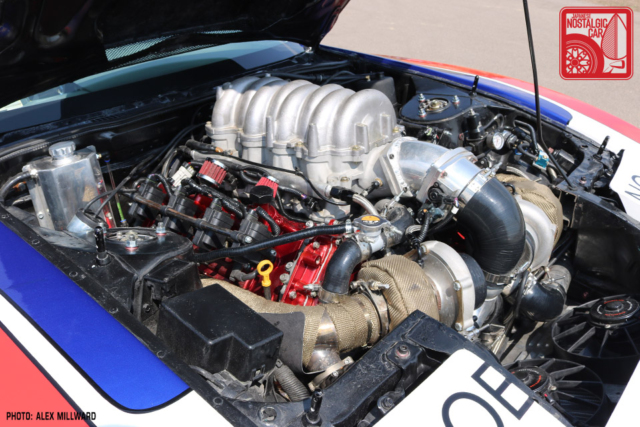 Nevertheless, the motor’s intake was still too big to fully close the hood. As it turns out, Nissan had developed around five different engine covers for the Z31 IMSA car, one of which used a large cowled hood to accommodate a tall racing intake. By recreating it out of fiberglass, Alex was able to keep his car true the Nissan theme. 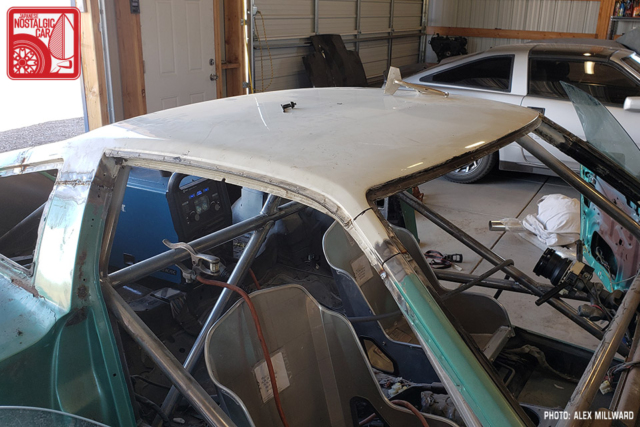 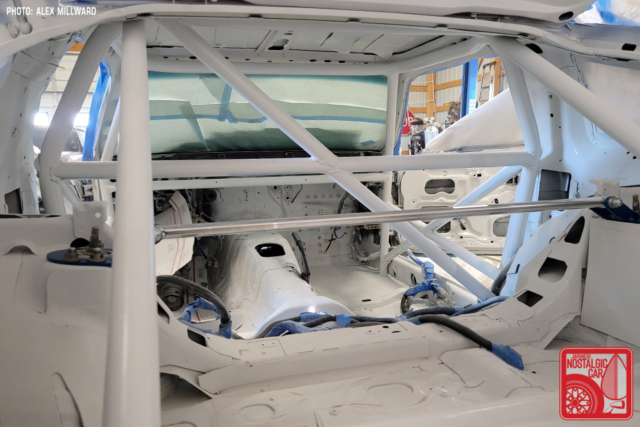 Interestingly, the car came with the popular T-top roof, rather than the slicktop that the race cars had. Alex happened to find a junkyard Z31 with a solid roof, worked some magic with a sawzall, and swapped them. While the top was exposed, he took the opportunity to install a full roll cage. 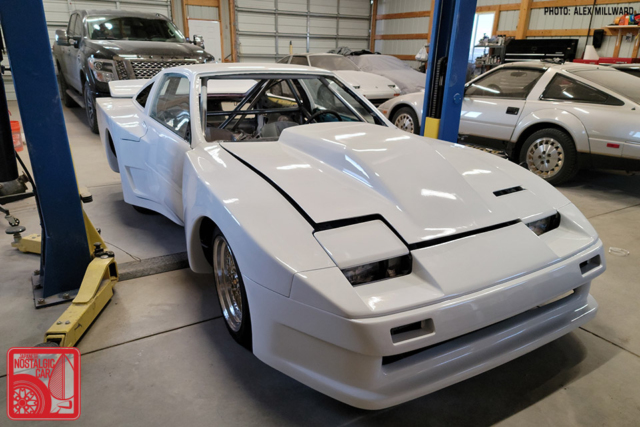 One of the most difficult aspects of his project was repairing the aged and cracking fiberglass found across the car. Honing his fiberglassing skills, Alex was able to restore the race car body, and finished it off by repainting it in its original white and overlaying red and blue decals on top to replicate the racing livery. 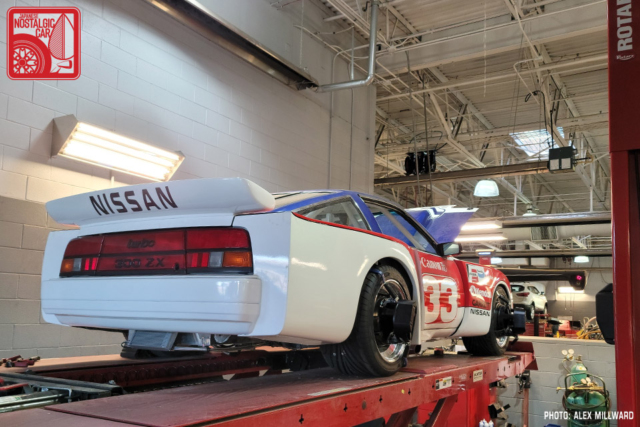 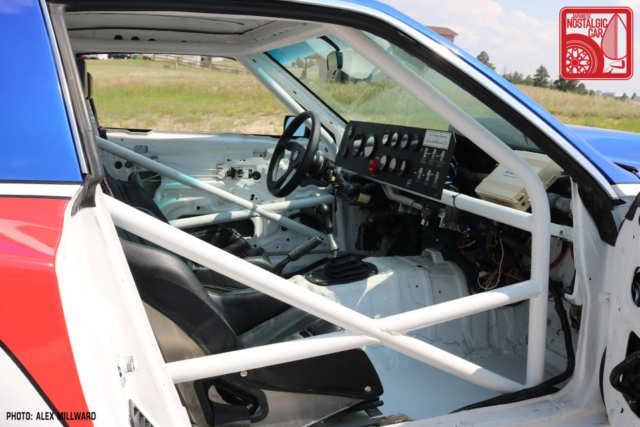 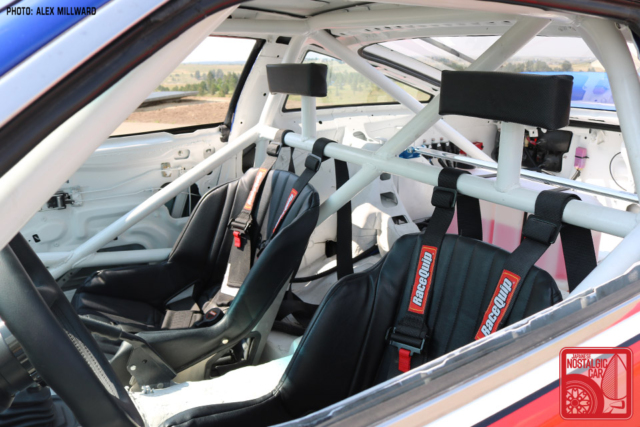 Inside, aluminum-backed Kirkey buckets with 5-point harnesses recreate the cabin of the race cars. A custom instrument cluster and switch board provide all the information and controls for things like fuel pumps and radiator fans that a real race car would. In the top right corner of the dash sits a plaque that reads “In Loving Memory, Alex Millward Jr.” 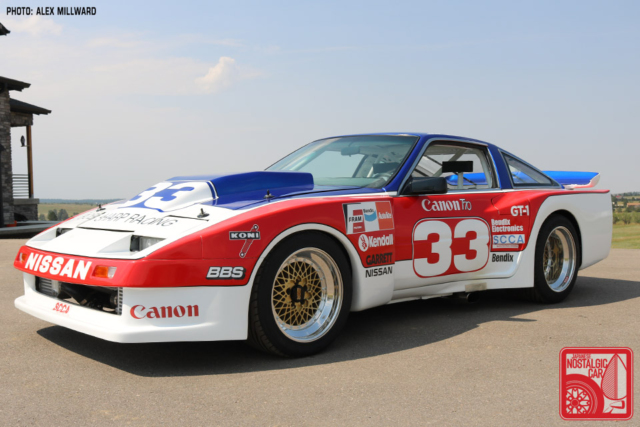 Overall, it took Alex four years to acquire the parts, repair the fiberglass, and build the car. With the help of tuner Felix Hamilton, the recently made an amazing 983 horsepower and 974 lb-ft of torque at the rear wheels while running 24 psi of boost.  “No doubt the car could make more,” said Alex, “But pushing the motor to unknown limits could have been catastrophic. I’ll take the 1,000 horses and be happy.” 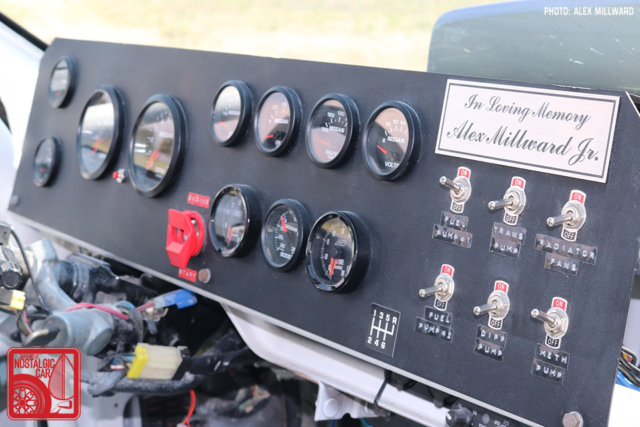 It’s been quite a journey to bring this unique and meaningful car back to life. The car not only looks like an IMSA 300ZX race car, but makes the power to match. With his holy grail Z31 complete, where does this Z31 fanatic go from here? Well, Alex is still on the hunt for other rare Z31 variations, including the Straman convertible, the rare SF model Z31 which had no power options, and even the funky Spartan II, a 1940s-looking Excalibur-style car built on a Z31 chassis. 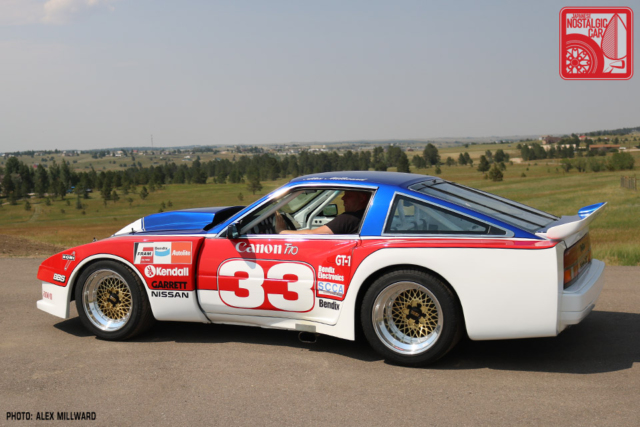 We’ve never met anyone as obsessed with the Z31 as Alex, but we’re glad that someone like him exists in this world. After all, someone has to carry the torch for Nissan’s most unloved Z.

permalink.
This post is filed under: profiles and
tagged: 300zx, nissan, z31.