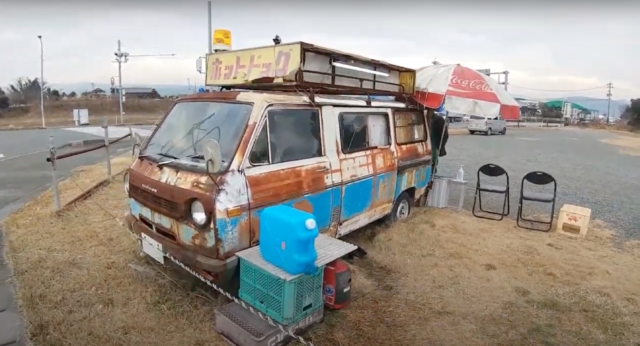 From the looks of the dilapidated Nissan van that houses Hot Dog Yotsuba, you might assume that it had closed long ago. But, the patina’ed exterior was part of its charm, and the stand looked like an abandoned car even when it was open. Having been in operation for 45 years, it was likely one of the oldest and longest-running mobile food vendors in the world, but on March 31, it closed for good. 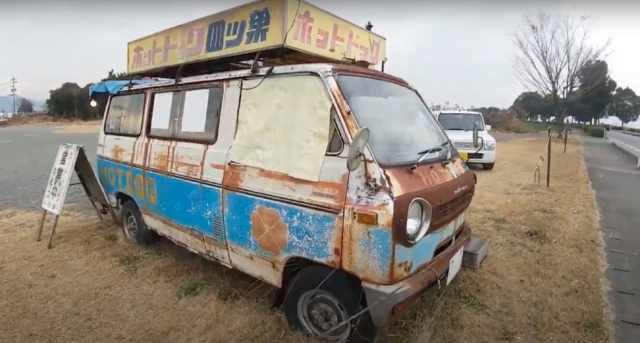 Located in Kumamoto, Hot Dog Yotsuba predated modern food trucks by decades, having faithfully served up wieners since 1976. Until about 10 years ago the Nissan  Cherry Cab was still running, but then it failed one of Japan’s notorious Shaken inspections. Replacement parts couldn’t be found, and so the proprietor parked it in a vacant lot at the Mashiki-cho Hirata intersection, about 4km from Kumamoto Airport, and continued to operate until last month.

Despite its appearance, Hot Dog Yotsuba’s flashing yellow light on the roof and reputation for good dogs brought in a steady stream of customers, some of whom were introduced to the stand by their grandparents. The van is so famous, it’s even on the Japanese Wikipedia page for the Nissan Cherry Cab. Seating consisted of two folding chairs and a milk crate. The handwritten offers just seven items, six of which are toppings. The basic dog hasn’t changed in over 40 years.

One of the reasons for the location is its proximity to Honda’s Kumamoto Factory. It’s the company’s fourth oldest, churning out everything from Super Cubs to Goldwings, Monkey bikes to CBR1000RRs. When Hot Dog Yotsuba first opened, there were no 24-hour convenience stores around, so shift workers would line up at the old Nissan van. As the years went on, though, increasing competition moved the closing time up to midnight.

We’ve never had the pleasure of having a Yotsuba dog ourselves, but they’ve been called legendary and reportedly tasted nothing like American hot dogs. The whole notion of a hot dog was rare in Kumamoto at when the stand opened, and USDM dogs have too much ketchup and mustard for Japanese tastes. Instead of relish and onion, Yotsuba dogs offer toppings like cheese, ham, eggs, and tuna. The mustard is spread on the bun itself, which is crispy and toasted. 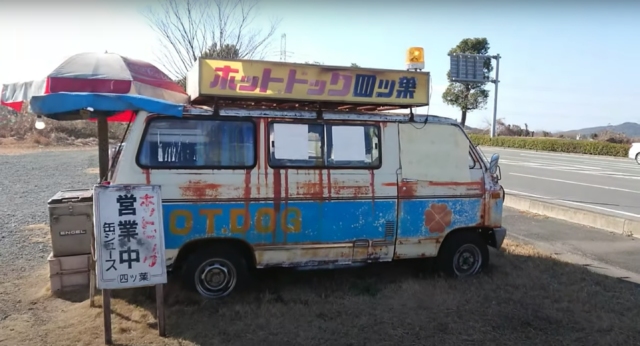 The stand has not been without setbacks. It closed temporarily in 2017 for a year and a half because of the owner’s health issues. The inside of the van was damaged during the 2016 Kumamoto earthquakes, which killed 273 and stopped production at Toyota, Honda, and Sony factories in the region. “I’m glad that the car was safe,” the shopkeeper told a food blogger in 2019. “It’s as important to me as my wife.” After 45 years, the owner is finally retiring and another relic of the Showa Era is coming to an end.