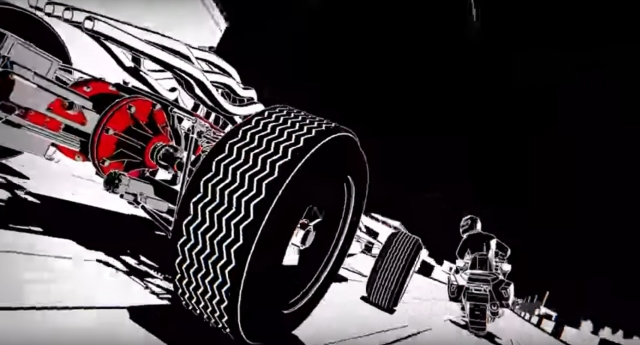 The Honda Formula One channel has made a dynamic ad showcasing the company’s wide range of machines. The video is animated in a nifty, high-contrast style, and depicts F1 cars racing and transforming into vehicles as wide-ranging as the Super Cub motorcycle to the 1965 RA272 race car to the HondaJet. The lineup is probably more diverse than any other automaker out there. If it weren’t for the retirement of ASIMO last year, there could’ve been a robot sprinting down the track.

The style is pretty clever, and not afraid to make a few jokes at its own expense. The driver’s shrug of confusion the F1 car turns into a U3-x unicycle was genuinely funny, as was the moment when a car morphs into a lawnmower after getting shoved infield. The stylized animation allows for neat tricks too, since the track can serve as tarmac for an NSX and water for a hydroplane at the same time. Staring last year, Honda became an engine supplier for Red Bull Racing. Now, if it can only reclaim some of its 1987-91 era success.