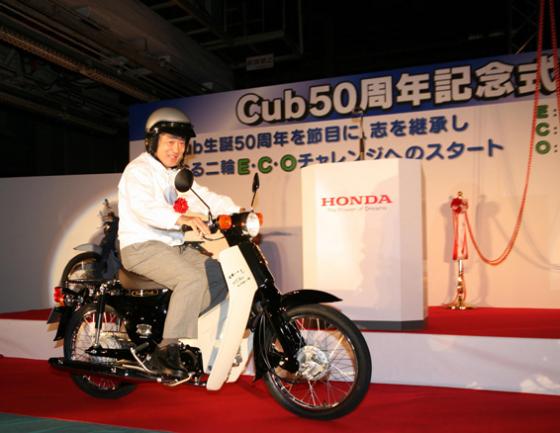 Honda held a ceremony in Tokyo yesterday to celebrate a half century of the Super Cub motorcycle, which went on sale in August, 1958. Although its engines have grown in size and technology, the basic design of the bike has remained the same. The Super Cub has been sold in over 160 countries and in April, Honda sold its 60 millionth unit. Clearly, it holds the record for best selling motorcycle of all time.

The Super Cub was exported to the States in 1959 and gave Honda a foothold into the market. The tag line, “You meet the nicest people on a Honda” became a popular catchphrase. It was even immortalized in song by the 60s American band The Hondells, with their hit song “Little Honda.” In fact, much of their entire album consisted of songs about Hondas such as “Honda Beach Party,” “Haulin’ Honda,” and “Two Wheel Show Stopper.” Our JNC forum moderator colhogen has one that he’s restoring.

permalink.
This post is filed under: Motorcycles and
tagged: honda, super cub.