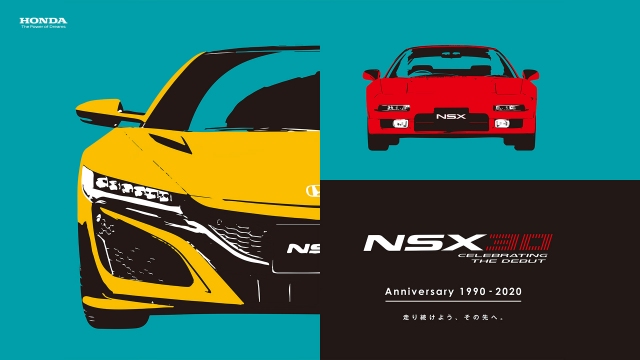 Over the weekend Honda launched an NSX 30th anniversary minisite in Japan. But wait, you might say. Didn’t Honda already celebrate the 30th anniversary of the NSX last year? Well, you would be correct. The event at the 2019 Chicago Auto Show celebrated the 1989 debut of the Acura NS-X Concept. The production NSX was announced on September 13, 1990 and went on sale a day later, September 14.

Right now there’s not a lot on the site, just one wallpaper design and a few photos. There’s also a message from the development manager of the current NSX, Satoshi Mizukami (translated from Japanese):

To all who love the NSX:

The original NSX was a human-centered supersport that brought together the most advanced technology. Challenging development allowed us to explore new possibilities for sports cars, and we were able to make it happen. It left a huge mark on the world’s super-sports cars.

The second generation inherited these aspirations as a new generation of super-sports car. Quick to integrate electrification technology and evolve into a one-of-a-kind entity, I am proud to say that we have provided a New Sports eXperience.

Our developers continue to push the envelope in further development of this new experience. Our aspirations are the same as those of our predecessors who worked on the original.

“Our dreams come true” was a key phrase [used in Japanese NSX commercials] at the time and it contained the dream of ​​sharing the NSX with people all over the world  who share our philosophy. We want to keep pursuing our dreams with you.

In commemoration of the 30th anniversary, we would like to share our passion for the NSX, the joy of pursuing dreams, and the joy of taking on new challenges, and the history that we have woven with everyone who has loved the NSX.

With gratitude, we will offer a variety of content here. If you’re interested in joining us in the pursuit of your dreams, we’re more than happy to have you.

It’s hard to believe that it’s been five years since we welcomed the NSX into the 25 Year Club. For what it’s worth, we went with the production car’s birthday. However, the concept’s birthday is worth mentioning, if not for its own bit of controversy, and that’s a good excuse as any to celebrate your birthday twice. We’ll be checking the minisite periodically for interesting bits of NSX history.