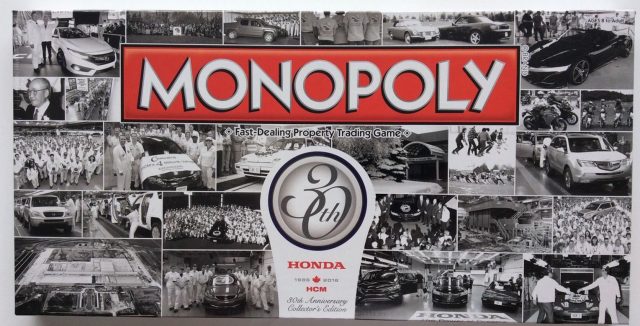 In 1986, Honda became the first Japanese automaker to build cars in Canada. The Alliston, Ontario plant churned out Accords first, then Civics, and in 1998 a second plant was constructed to make Odysseys and CR-Vs. To mark the 30th anniversary of Honda Manufacturing Canada’s opening, a Honda-themed Monopoly game has been created.

Instead of a top hat and iron, the pieces are all Honda vehicles, including a CA Accord and EF Civic, as well as 1998 Odyssey, 2003 Pilot, 2006 Ridgeline, and 2012 CR-V. Like the original monopoly game, the properties increase in value as you go around the board, going from lawn tools and generators to the NSX and HondaJet. 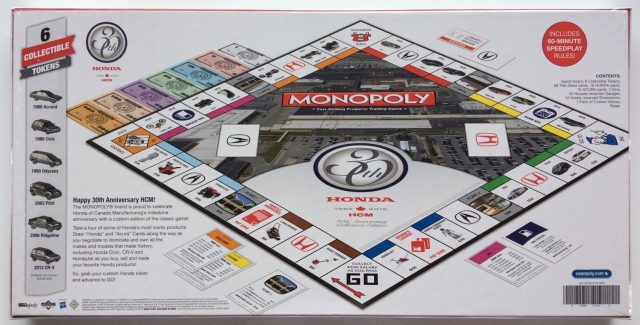 The set was only available to Honda employees, but a few of them have leaked onto eBay. The sets appear to run anywhere from CA$90 to $500 (US$68 to 378). They’re not cheap, but if you must have a Honda-shaped Monopoly token, in 2003 Johnny Lightning released a set of diecast cars with game tokens that includes the 5th-gen Accord. Or, if the Game of Life is more your taste, Honda Japan once issued a version of that in Japan (ironically, featuring the StepWGN and not the Life).

permalink.
This post is filed under: honda and
tagged: accord, civic, honda.