Casio’s Honda watches are a tribute to historic machines 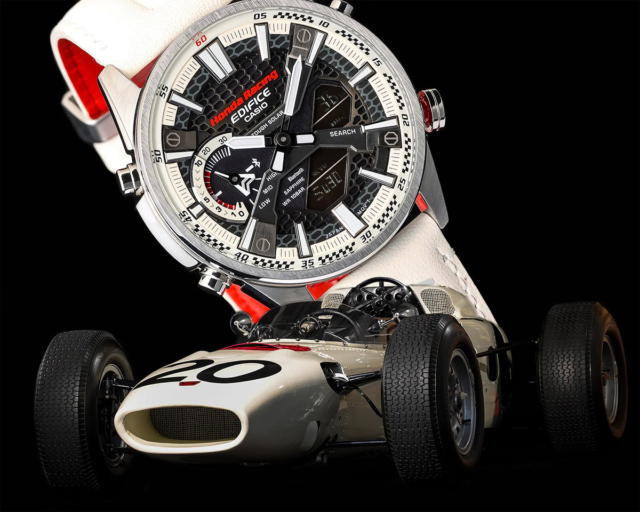 We don’t really know a lot about watches here at JNC, but our recent article about an Initial D and MF Ghost Casio took us down a bit of a rabbit hole. Turns out Casio is an official partner of Honda Racing and has been making some pretty spiffy watches are part of that relationship. There are two that caught our eyes specifically, inspired by the legendary racing machines of the Honda RA272 Formula 1 car and the Honda RC162 race bike. 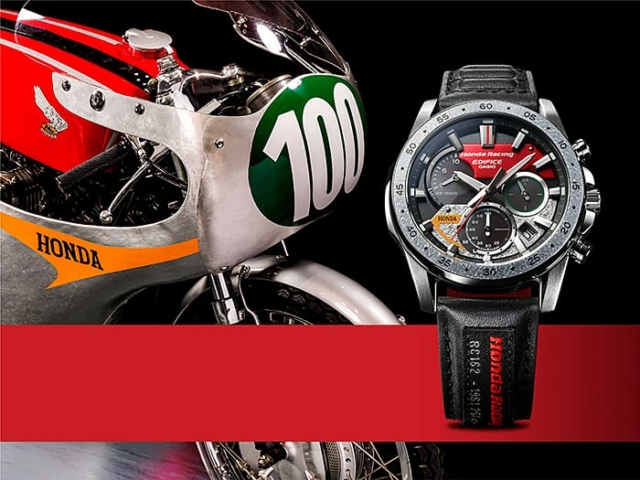 Chronologically (no pun intended) we should probably talk about the RC162 watch first. Inspired by the first Japanese bike to win a world Grand Prix championship. The 250cc-class champion stunned the world by winning the 1961 West German Grand Prix at the hands of Kunimitsu Takahashi.

The RC162 followed up by winning all 10 races it participated in that year, including sweeping the top five positions at the Isle of Man TT that year. As such, the machine earns a special place in not just Honda history, but the saga of Japan’s motoring age.

The Casio Edifice EQS-930HR-1A was released last year to commemorate the 60th anniversary of that championship. According to Casio, the aluminum bezel and dial are an homage to the aluminum fairing of Honda’s race bikes of the era. If you look closely at the face, there are manufactured “imperfections” as a cue to the hammered and unpainted aluminum of the original.

The red on the watch face is a tribute to the red fuel tanks. A yellow accent mark with vintage “Honda” font is inspired by the same graphic on the fairing. Casio says that the leather band is meant to evoke the racing suits of the 1960s as well.

The Honda Racing logo can be found on the dial, band, and reverse side of the case. While we understand why these are there, the typeface looks a bit too modern to our eyes and clashes a bit with the design’s vintage coolness. It would have been nice to see Takahashi’s No.100 in a white-on-green roundel somewhere on the watch, but what do we non-watch designers know? 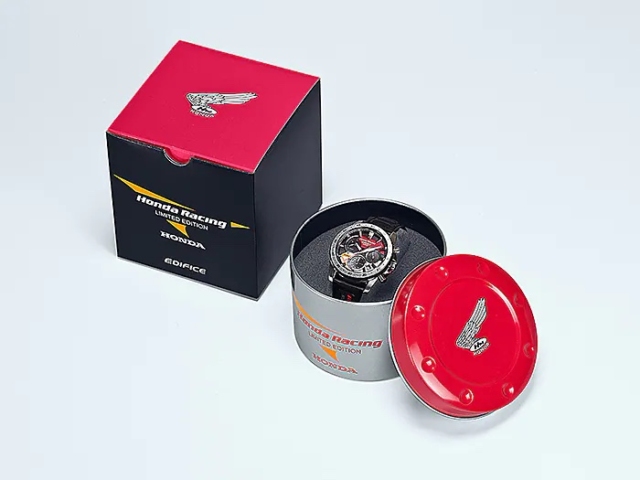 The watch comes in a neat little tin case that resembles a motorcycle fuel filler cap painted in the same red, silver and yellow colorway as the bike. The watch is 100m water resistant and solar powered. When new, it retailed for about $269.

The second classic Honda watch on our list, the Casio Edifice ECB-S100HR-1A Championship White Edition, was announced in September 2021. As you might imagine, it’s a tribute to Honda’s early Formula 1 efforts starting with the 1964 Honda RA271. 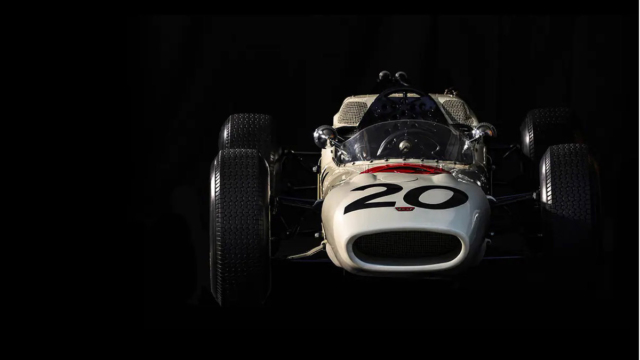 The RA271 isn’t a race winner, but its development directly led to the RA272 the following year. In 1965 it, like the RC162, astounded the world when it became the first Honda — and the first Japanese car — to win an international Grand Prix race.

The watch features the white and red colors that graced Honda’s F1 cars of the era, with a white body and red “rising sun” circle meant to represent the flag of Japan. After the RA272 won the 1965 Mexican Grand Prix, the color came to be known as Championship White. That color is repeated in the bezel alongside a checkered flag motif.

There are some generic racing elements like a honeycomb pattern in dial, a pattern that doesn’t appear on the actual car. Like on the Initial D and MF Ghost watch, we’re not fans of the text boasting about features such as Bluetooth and “Tough Solar” batteries. The digital displays also seem a bit out of place against a car that raced in a purely analog age.

The coolest feature, though, has got to be the Championship White band with red on the reverse side. For a more formal look, the watch also comes with black bands. At the time of launch the watch retailed for $350.

Honda watches aren’t anything new. They seem to release new designs annually, and anyone that’s been to a Honda gift shop at their Tokyo headquarters, or to either of their race tracks, knows that there’s no shortage of them available for purchase. We’ve seen quite a few but none have screamed “Honda” to us. Even this recent release, which uses the same red as the Type R badges, doesn’t seem uniquely Honda to us. Swap some logos around and it could be any generic watch. The RC162- and RA271-inspired ones, on the other hand (or wrist), are unmistakably Honda.