DESIGN: A modern Honda roadster inspired by the Beat and RA272 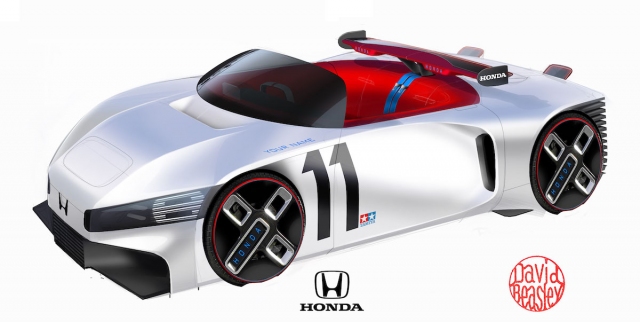 Honda has come out with a new electric vehicle, a small, rear-wheel-drive electric hatchback called simply the Honda e. We have to admit the production version, while a good car, was a bit of a visual letdown after the fabulously retro concept. However, automotive designer David Beasley, friend of JNC and the man who penned the beloved Nissan IDx concepts, recently sent us an incredible vision of how Honda could utilize the e’s platform for something that embraces its heritage and offers enthusiasts an exciting driving machine.

The original Honda Urban EV, shown in 2017, was a stunner of an EV. With clear hints of the first-gen Honda Civic, it was at once modern, charming, and aggressive. By all accounts, the production Honda e borne from it is quite desirable. We wouldn’t even call it ugly, and if we had never seen the concept, we’d probably be quite pleased with it. But we did, and thus cannot help but be disappointed in what could have been.

On why there was such a drastic change from concept to production, David tells us based on his expertise and years in the industry, “It’s quite possible that the concept was made after the production car was finalized.” 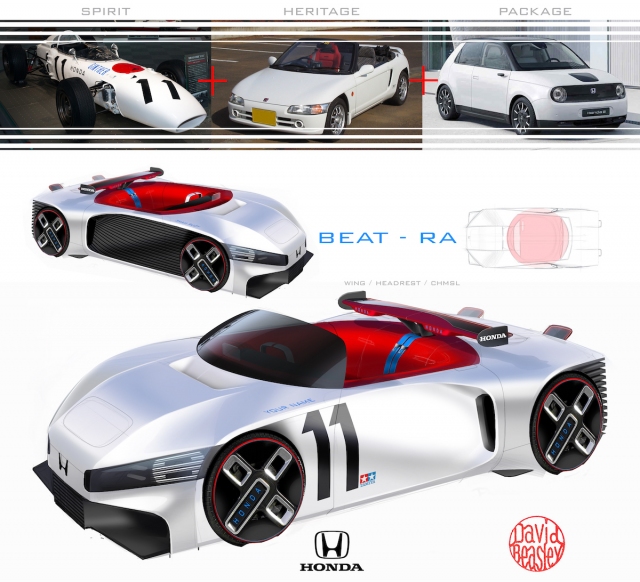 Enter David’s Beat-RA, taking the Honda e as a starting point and conjuring a sports car that hearkens back to both the mid-engined Beat kei car of the early 1990s, as well as Honda’s first Grand Prix-winning Formula One car, the 1965 RA272. Writes David:

Hope you’re doing well and your family is safe and sound. I did a rendering today for the fun of it and thought I’d share with you, perhaps it’s interesting for JNC. how about a new EV for Honda, channeling both the Beat and the RA272 race car, but on a new Honda E platform and taking design cues from their most recent concepts. 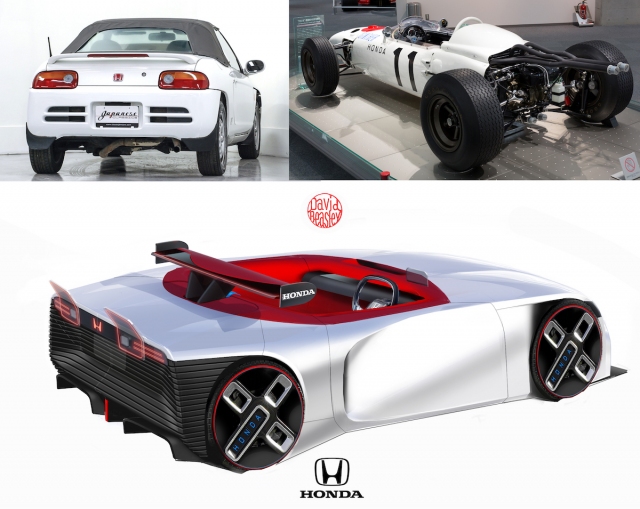 The wheels might look a bit familiar, as they are similar to those of the Mini E. David explains:

Alas, I’ve drawn something like them many times at Nissan but never got them through. Fair play to Mini for their great work.

Nevertheless, the car is full of thoughtful design. David continues:

It’s a little city racer with a removable windscreen, and the psuedo-rear wing doubles as the headrest and CHMSL [third brake light]. When seen from above, the red sun racing spot is actually the interior!

The taillights are incredibly clever, simultaneously alluding to those of the Beat and the raised exhaust pipes of the F1 car. Perhaps the increased brightness of brake lights could suggest hot gases spewing from the shotgun exhaust (of course, with this being an EV, there would be no gases). We also love the black rear graphic, as it alludes to the tangle of V12 exhaust pipes, differential, and suspension that is the RA272 when viewed from the rear. 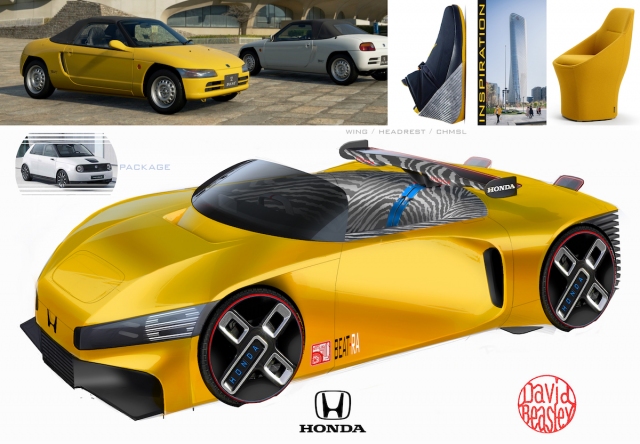 We also dig the winks to Japanese car culture, such as the Tamiya logo on the white version. It sits just under the simple yet bold No. 11, a callback to the racing number of the 1965 Mexican Grand Prix-winning car. David also rendered a yellow variant, as yellow was the hero color of the original Beat. The zebra-pattern interior, is also a something the original Beat offered, and we are floored by the surprise appearance of the JNC inkan on its fender(!).

Honda has tried its hand at a few recent concepts along these lines, including the Project 2&4 Concept from the 2015 Frankfurt Motor Show and the Sports EV Concept from the 2017 Tokyo Motor Show. We think the Beat-RA tops both of those efforts, and would buy one today if they built it. Are you listening, Honda?

4 Responses to DESIGN: A modern Honda roadster inspired by the Beat and RA272