VIDEO: The Honda Collection Hall’s S800 and NSX in action 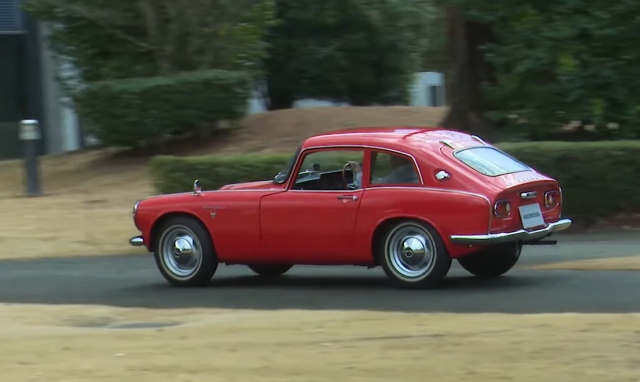 Honda periodically posts videos of cars from their museum at Twin Ring Motegi going out for a spin. All the cars at the museum are kept in running condition, as these videos demonstrate, and as it happens the most recent cars the Honda Collection Hall are also some of Gordon Murray’s favorites — the S800, whose transmission inspired the H-pattern manual of the new GMA T.50, and the NSX, whose driving feel and suspension inspired that of the McLaren F1.

First up is the Honda S800, a wonderful little Scarlet coupe from 1966. The docent is more than happy to rev it to 9,000 rpm too, though it can reliably go even higher. Then it’s time for the little loop around the back of the museum.

It’s almost scary how similar and Honda-y the S800’s and NSX’s engines sound. One is a tiny 0.8-liter inline-four, the other’s a 3.0-liter V6, and they’re separated by 24 years, but that unmistakable precision sound is there.

By 1997, improvements to the NSX gave the engine a bit more bass along with an increase in displacement to 3.2 liters. The Japanese-market NSX Type S was a lightweight version essentially the same as the US-market Zanardi Edition (except it came in much cooler colors).

As far as we know, the 1959 Benly C90 was not a direct influence on any particular supercar, but it’s a neat bike all the same. According to Honda, it was the world’s first mass-produced 125cc, 4-stroke, overhead-cam twin. Interestingly, they also say its design was influenced by Japanese temples and shrines. I guess you can see the resemblance if you squint. In any case, it’s always fun to see these machines outside of the museum halls doing what they were made to do.