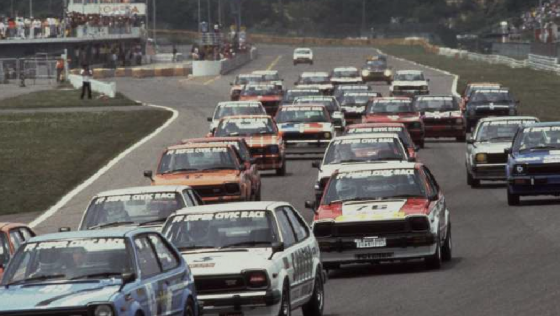 We all know that Hondas provide some of the best deals in cheap motoring fun, and Honda Japan knows this too. It’s been sponsoring a one-make race series in Japan since 1981, when the second-gen Super Civic debuted. From then on, some generation of Civic – Wonder, Grand, Sports, Miracle – has been the HOA (Honda One-Make Racing Association) chariot of choice until 2002 when the Integra took over.

But with last year’s return of the Civic Type R, the old warhorse is taking center stage again and Honda has written up a detailed history of its one-make program in Japanese.

The closest US equivalent is the Mazdaspeed Spec Miatas but the point is the same – to focus on the drivers by putting them in near identical cars where the biggest difference is your team livery. And with factory support from Honda, parts are plentiful and as reasonably priced as you can expect for racing. Needless to say, we’d love to have one of those 1981 Super Civics for some modern day autocrossing.

permalink.
This post is filed under: motorsports and
tagged: civic, honda, one-make.