ASIMO is retiring: A history of Honda’s groundbreaking robots 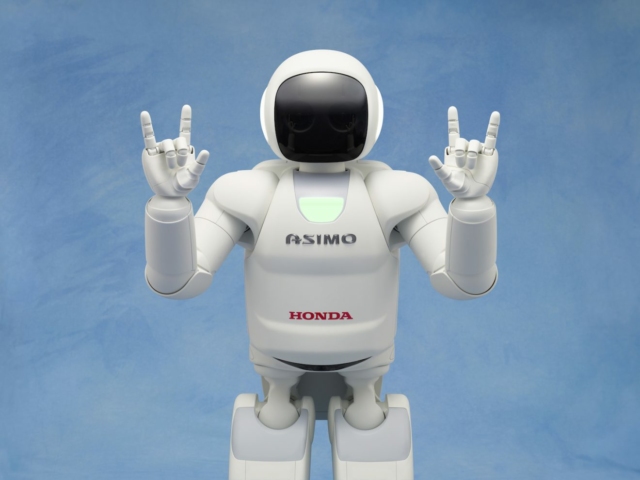 On March 31, 2022 Honda’s ASIMO robot is cleaning out its desk, turning in its badge, and collecting that gold watch on its way out the door. ASIMO is going to retire. After 22 years of delighting children, advancing technology, and holding a mirror up to our own humanity, Honda’s little droid will cease public appearances. While one can argue that it’s simply an oddball gimmick going away, ASIMO is more than just a company flaunting is tech. Honda did something even the top robotics researchers in the world couldn’t achieve, and it became a de facto mascot for the brand.

ASIMO as we know it — the cute, 4-foot, 3-inch astronaut-looking dude — began life in 2000. However, if you look at all the development that led up to its creation you’d have to go back to 1981. According to a 2001 article in The Wall Street Journal, Honda’s engineers were coming off a brutal but victorious battle for motorcycle market share against Yamaha:

[Hiroyuki Yoshino, an engineer who would become president in 1998] and his men were distressed because they didn’t really see themselves as metal peddlers but, rather, as acolytes of founder Soichiro Honda, an engine-building legend who once strapped a NASA jet pack to his back. In the soul-searching that arose amid the marketing war, company leaders decided they must set a noble goal to motivate the engineers, who then as now, were considered the soul of the company.

Ideas were tossed around, but it wasn’t until 1986 that a formal robotics lab was established. Inspired by a love for the classic anime Astro Boy, the lab marked the start of Honda’s E-series (for Experimental) robots. At the height of the Bubble Era, a time of limitless optimism and cash, Honda poured R&D dollars into the study of human locomotion. 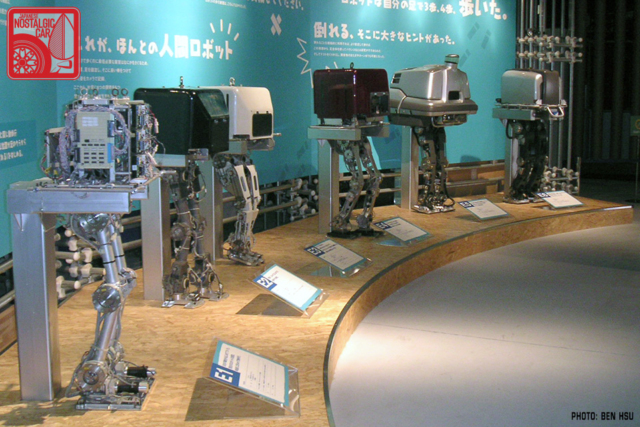 The first robot, called E0, resembled a computer on legs and had only six joints – one at each leg’s groin, knee, and ankle. It required a web of cables to feed power and hydraulic fluid into massive pistons in the legs, and each step took around five seconds to complete.

This was a time in which Honda cars still had carbureted engines, but Honda’s robot would have far surpassed anything the world’s top robotics labs could have even dreamed of. Yet, Honda kept the E-series completely secret for 10 years. During that time, it evolved into something that resembled a Gonk Droid from Star Wars, but more leggy. 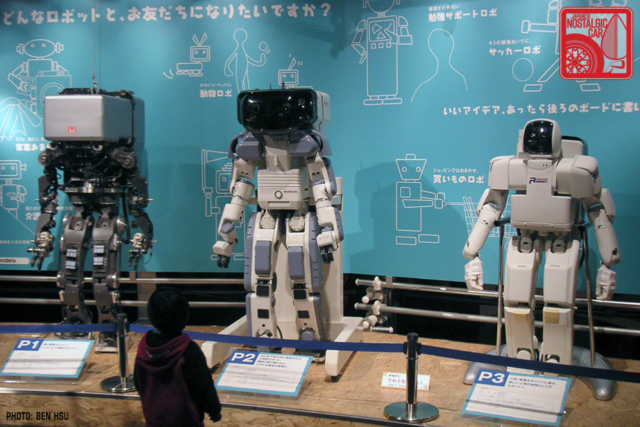 Honda did not go public with its robot research until 1996, debuting the first of its P-series (for Prototype) robots. During its secret decade, Honda made astronomical strides in its cars and motorcycles, going from the Honda City and EA Civic to supercars like the original NSX. The robots advanced just as rapidly. The P3 (above, right) was introduced in September 1997 and claims credit as the world’s “first completely independent bi-pedal humanoid walking robot.” 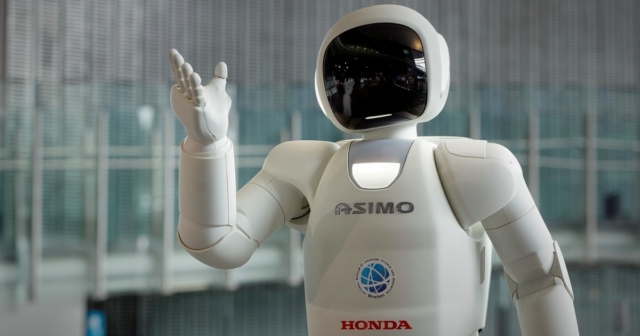 There was a problem, though. The P3 was 5-feet, 4-inches tall and weighed 287 pounds. It was not lost on them that in most Hollywood movies robots and dystopian futures went hand in hand, and soon engineers began to worry about a potential backlash from those who feared a machine uprising. In 1996, one engineer even visited the Roman Curia to seek the Catholic church’s blessing. The response, as reported by the Wall Street Journal: As long as it’s meant to help people, it “would be welcome.”

Since the robots were designed for working alongside humans, and possibly to make it less threatening, Honda then set to work reducing its weight. ASIMO was introduced to the world in November 2000, weighing just 115 pounds. It also stood over a foot shorter than P3, as Honda had determined a seated human should be able to look the robot in the eye. In all, engineers reduced the weight-to-size ratio by an impressive 20 percent. 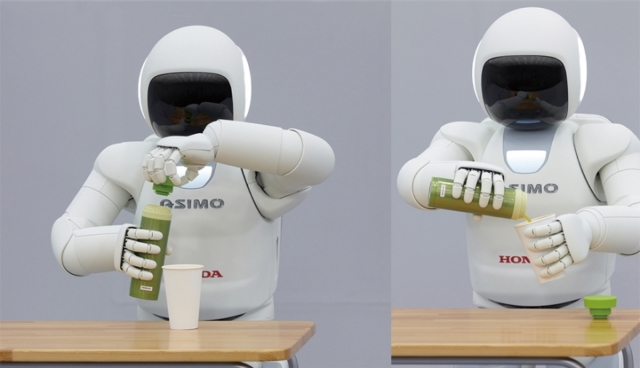 Honda chose the name ASIMO both as an homage to science fiction writer Issac Asimov and also as a pun for ashi (leg in Japanese) and mo (short for mobility). Officially, the name was an abbreviation for Advanced Step in Innovative Mobility. Honda continued to evolve ASIMO, giving it more and more abilities as time went on, though the name and general appearance stuck. Here is a partial list of the abilities ASIMO gained over time, in no particular order:

To put it succinctly, Honda had created the most advanced humanoid robot on earth. 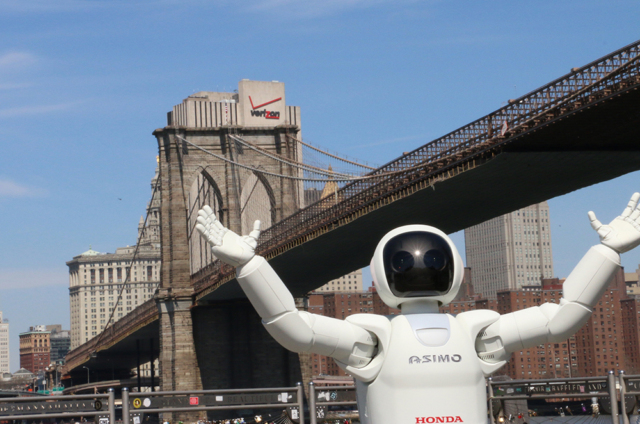 ASIMO quickly became a worldwide sensation. It stood as a symbol of Honda’s incredible innovation and R&D prowess. It was another feather in the cap of the company that had created the Super Cub, the Civic, the NSX, the Integra Type R, the S2000, and the HondaJet. It was totally on-brand for Honda’s friendly corporate image, but it also said to the world, “When it comes to engineering, Honda is untouchable.”

Not that others didn’t try. Soon companies like Toyota, and Mitsubishi Heavy Industries, Hitachi, Sony, Fujitsu and more all followed suit with their own robot army. None, however, possessed the charm or wide range of abilities that ASIMO did.

None of those heaps can claim to have walked the red carpet in Hollywood, rung the opening bell at the New York Stock Exchange, become an attraction at Disneyland, conducted the Detroit Symphony Orchestra in a rousing rendition of “The Impossible Dream“, been recreated as a 49-foot-tall float at the Rose Bowl parade, been parodied in South Park, or toured the globe meeting with world leaders. ASIMO wasn’t just an ambassador for Honda, it was an ambassador for Japan.

In 2018 Honda announced that it would stop developing ASIMO. The company said it would use the knowledge and experience gained from the project to work on more practical applications, such as the PathBot. Its description is not exactly awe-inspiring:

The Honda P.A.T.H. (Predicting Action of the Human) Bot is an AI-equipped robot that recognizes its surroundings, allowing it to move from one destination to the next while avoiding obstacles and selecting the optimal route.

That’s something ASIMO managed to do years ago, with feet. Four decades ago the project that would become ASIMO put a stake in the ground to firmly establish Honda as an engineering-driven firm. It’s no coincidence that Honda developed its best cars during that period. Honda forged ahead with ASIMO because it believed engineers were the soul of the company.

It’s putting out to pasture one of the world’s most innovative creations, but the battle for market share is fiercer than ever, and we’re about to embark on a once-in-a-century shift in the automotive industry. What drives Honda now? ASIMO proved that machines can have a soul, but it’s up to its makers to keep it alive.

permalink.
This post is filed under: News and
tagged: ASIMO, honda.

2 Responses to ASIMO is retiring: A history of Honda’s groundbreaking robots