Earlier this week Nissan released images of the first production GT-R50. It featured a subtle tribute to the Kenmeri Skyline GT-R show car from the 1972 Tokyo Motor Show — one that was in fact too subtle for some. So courtesy of Italdesign, here’s another one that’s a more on the nose. 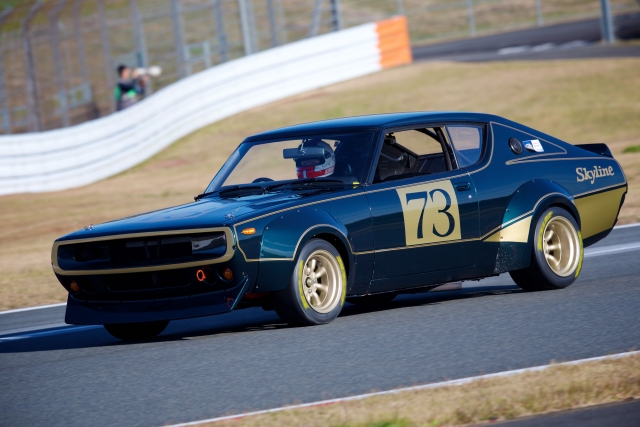 There are a few key differences between this and the first-release version. The most obvious one would be the color, a green and gold that much more closely mirrors the original show car. Next, the number is 73 rather than 20, which is what the original show car sported, a nod to the year it was scheduled to race before the OPEC oil embargo ruined everything.

Lastly, there’s the pinstripe, which extends beyond the front vent and zig-zags over the rear quarter panel before connecting to the top back corner of the rear quarter panel. Personally, I don’t think the line is quite as elegant as the stripe on the first production car, as it creates at 3-way intersection with the line that goes up the C-pillar and traces the rear glass.

Here’s a look at another car that looks just like the first production GT-R50 except for its number on the rear flank. In this light, the light greenish color looks like it could also be a reference to the Millennium Jade color exclusive to the V-Spec II Nür.

Nissan and Italdesign have also shown images of one that is an homage to the R34’s iconic Bayside Blue. It looks more matte so it’s not an exact replica, but even Nissan’s own 50th Anniversary R35‘s blue didn’t match the original Bayside Blue 100 percent.

For those who don’t like the two-tone colors, there’s also one in pure black. I have to admit, if I wasn’t such a sucker for the heritage cues this might be my favorite yet.

But we all know supercars love references to racing history, and it’s a testament to the GT-R’s legacy that one can produce so many homages to past cars. There are actual supercars that have been charging seven figures for ages that don’t have the GT-R’s motorsports heritage.

Andrea Porta of Italdesign tells JNC that the green and gold Tokyo Motor Show Kenmeri tribute is an actual car that’s already spoken for, which is a shame. But, 50 of these 720-horsepower bespoke R35s will be made, so if you want one there still may be a chance, if you’ve got $1.1 million to spare. To inquire, contact Italdesign here.