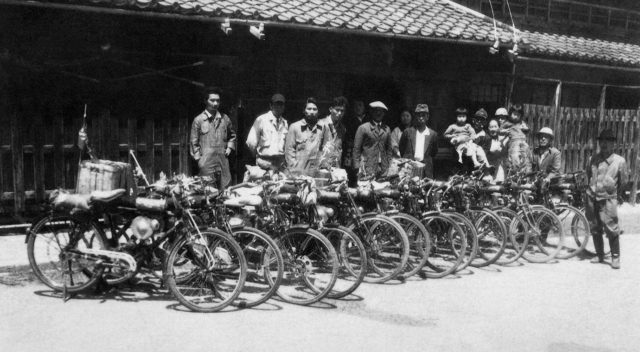 On this day 70 years ago, Honda Motor Corporation was officially established. The photo above is that of Honda’s first factory, in Hamamatsu, with 34 employees. The company’s first product was a small engine strapped to a bicycle, making it the first Honda motorcycle. Founder Soichiro Honda was inspired to build it a few year earlier, when he saw his wife riding her bicycle to town every day and wanted to make life a bit easier for her.

He took an army surplus radio generator and created an engine for her bike. It proved so popular that he established Honda Motor Co. to mass produce them, and subsequently sold 500 units. Once these ran out, Honda went to work designing his own engines, and the rest is history. To celebrate the occasion, Honda has released an adorable animated video depicting its growth. Happy 70th birthday, Honda.

permalink.
This post is filed under: Anniversaries and
tagged: honda, motorcycles.