NEWS: Get your Juke in Nissan heritage colors 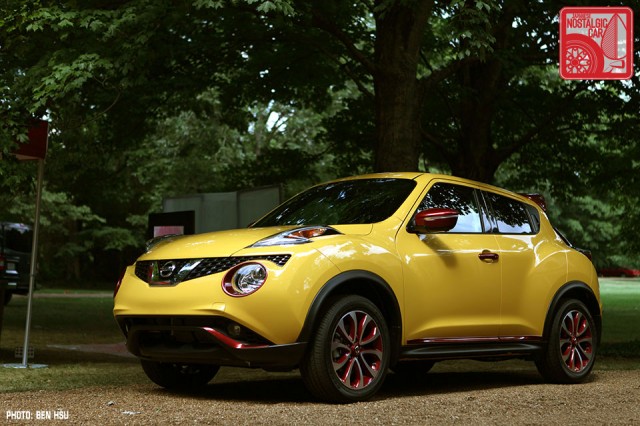 Nissan recently revealed the 2015 Juke to media in Nashville, Tennessee. This garishly colored example, which reps jokingly called the “USC edition,” is part of a new program that allows buyers to pimp their Jukes with custom coloring. We think this will lead to a spate of pretty bizarre looking specimens of the already-funky Juke on US streets, but for JNCers in Japan, you can choose from a palette of heritage colors that have appeared on historic Skylines and Fairlady Zs.

In honor of the company’s 80th Anniversary, Nissan is offering the Juke in famous hues that have graced its iconic cars. From the Fairlady Z, there’s Premium Sunflare Orange and Premium Deep Maroon once found on S30s. From the Skyline comes Aurora Flare Blue Pearl, based on the Bayside Blue that was the hero color of the R34 GT-Rs. And because Japan, there’s one final shade of Brilliant White Pearl.

Come 2015, you’ll be able to create something similar with your Juke. In the version shown last week, the wheels, head- and foglight bezels, side mirrors, door handles, spoiler, and running strips were all finished in custom candy red. In addition the new version will have boomerang headlights and taillights and a revised fascia. If Ferrari, Porsche and Rolls Royce can have personalized editions, why not the Juke?

25 Responses to NEWS: Get your Juke in Nissan heritage colors