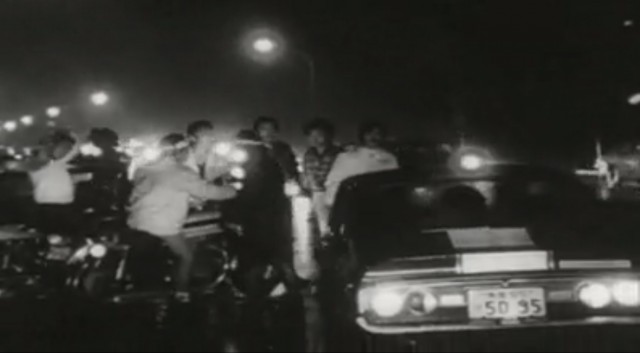 God Speed You! Black Emperor by award-winning director Mitsuo Yanagimachi is a documentary following junior members of Black Emperor, the infamous bosozoku gang, or “touring club,” as they prefer to call themselves. This is not a car movie by any means. However, if you can tolerate the subtitles and plotless, meandering pace, you might be able to catch glimpses of Tokyo’s automotive landscape circa 1976 — everything from kujira taxis to shakotan Celicas — captured in raw 16mm. 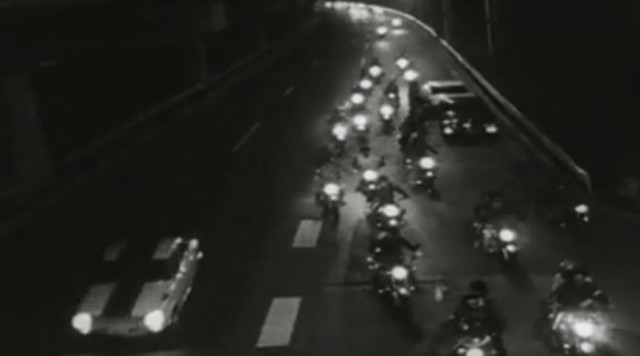 With their fearsome name, swastika logo and swarm of motorcycles, Black Emperor probably seemed like a pretty terrifying lot. Yanagimachi, though, reveals that many of the members were just directionless youths, some homeless, some dropouts, and some as young as 17. Their activities appear to consist mostly of vandalism, loafing and getting arrested for being high. Well, that and amassing the largest motorcycle gang in the area (and fighting rival gangs who attempt the same).

There’s probably a message about transience or ennui in there somewhere, but we’re not a hundred percent sure what those words mean. Basically, God Speed You! is an art film that happens to contain an assload of old Japanese cars in the background. The uploader has not allowed embedding so click over to YouTube to watch it.

Note: There are several images of swastikas in the film. It has nothing to do with Nazis. By now most probably know it was originally a Buddhist symbol called a manji that Hitler perverted, but we thought we’d mention it just in case it wasn’t abundantly clear.