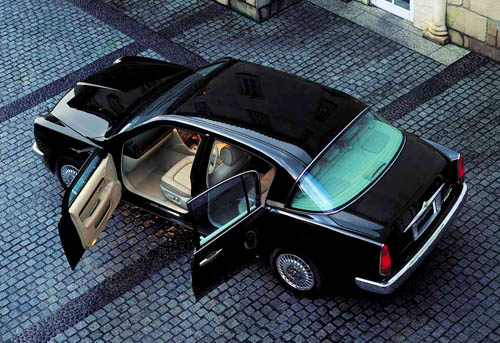 On the heels of another Toyotafest, let us return to the series where we check out some examples of modern retro-inspired cars along with the JNCs they mimic. In this post, we turn to a quintessential classic Toyota, the Crown, and a special model that was built in commemoration. 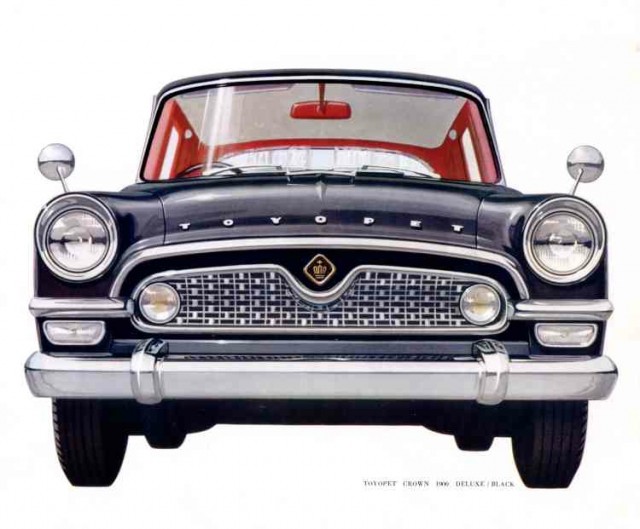 The Toyota Crown is the oldest continuously-running nameplate in Toyota’s lineup. Both historically and commercially, it is one of the most important Toyota models. The impact and legacy of its success in the home market on Toyota is readily seen through the widespread use of the crown-derived names across the lineup (e.g. Corona, Corolla, Camry) that all mean or are related to the word “crown.” Clearly, a history of the model can encompass a series of posts; here we will focus on the first-generation, which encompasses the RS, S20 and S30 series built from 1955 to 1962.

By the 1950s, Toyota had already produced two series of automobile platforms: the AA and its derivative sedans, and the SA and its derivative sedans and trucks. During this time of rapid industrial and economic growth for Japan, privately-owned passenger cars were becoming increasingly prevalent. To serve this demand, the next wave of Toyota vehicles was to be passenger cars designed from the ground up as opposed to one- size-fits-all chassis and drivetrains. 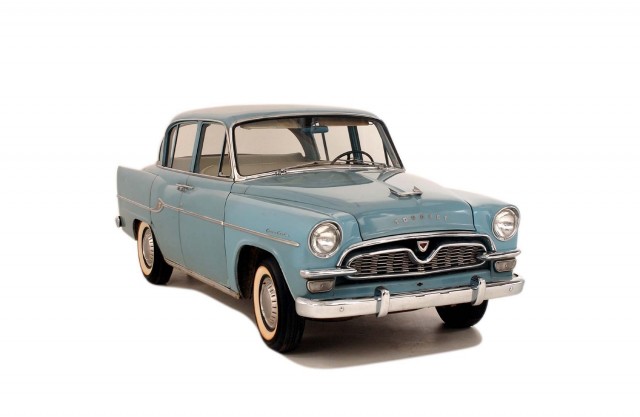 Development began in 1952, and the Crown arrived in 1955. Aiming for sophistication and comfort, Toyota endowed the new car with features such as a low floor and ride height and coil-sprung independent double-wishbone front suspension. Styling was in line with contemporary standards in the US and Europe but with an interesting touch: the rear doors were rear-hinged, suicide-style.

Power came from the venerable 1.5L 4-cylinder “Type R” engine fed through a 3-speed manual transmission. Due in part to the nickname given to the compact SA cars, Toyotas were marketed as “Toyopets” at this time. So far the Toyopet Crown‘s specs  might seem pedestrian to the modern eye, but it was an important milestone for the Japanese car industry. 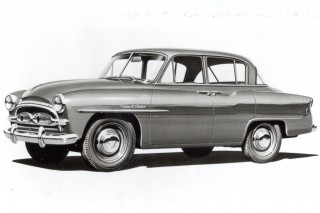 As mentioned, automobiles were becoming popular in Japan by the 1950s. However, many Japanese car companies were still reeling from the impact of World War II. Their answer to the growing domestic car market often entailed complete knockdown kits of European cars assembled under license in Japan. The Toyopet Crown, on the other hand, was a Japanese-developed car through and through. It was designed specifically to fit the needs of Japan. While Toyota had already developed cars on its own, the challenge was to bring to market a passenger car with not just durability and efficiency but also the sophistication on par with American and European cars.

As a first step towards achieving this goal, the Crown was both a pioneer in and inspiration for the Japanese car industry. By developing and building an attractive and modern passenger car in-house, Toyota upped the ante for everyone else. As a premium product, the Crown was embraced by wealthy private owners as well as companies and government officials, effectively becoming an aspirational symbol for the car-loving public.

The Crown also played an important role in Toyota’s origin in the US. Toyota was justifiably proud of it, having earned enthusiastic reception of its new product from the public and cemented its role as a cornerstone carmaker in Japan. With an eye for the American market, Toyota naturally chose the Crown as the inaugural product. After all, it was the best of Toyota at the time, having even accomplished a 31,000-mile trek from London to Tokyo in 1956.

However, Toyota recognized the difference in road conditions between the US and the rest of the world at the time. The variable road quality in Japan for which the Crown was developed was in sharp contrast to the American network of paved roads and highways. Nevertheless, Toyota boldly went with it and established Toyota Motor Sales, USA, Inc. in 1957 in California. Its first retail store in the US opened the following year, the iconic Hollywood Toyota, with the main goal of learning how to sell cars in the US. 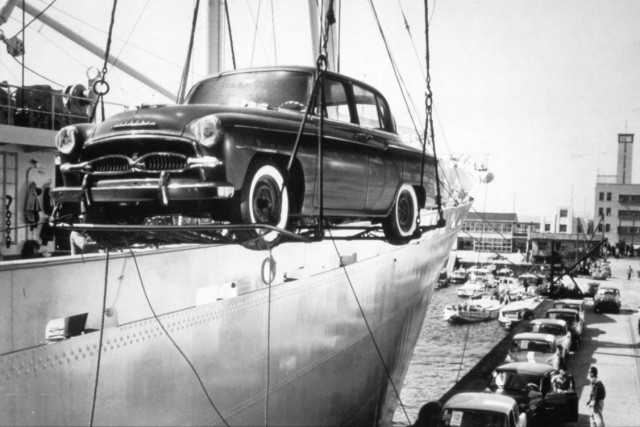 The first Toyotas arrived on the American shore that year: 30 high-specification Crown Deluxe models. The number of dealers grew in the subsequent years, and the Land Cruiser joined the lineup. Unfortunately, the Crown in its original form proved less than ideal for the American market. It was underpowered and unable to cope with high speeds of American roads. It should be pointed out that such problem was not necessarily unique to the Crown; the original Mini, developed in a pre-Motorway Britain, was similarly ill-suited for American highways. The Crown was withdrawn from the US by 1960, though thankfully the Land Cruiser prevailed commercially. Toyota’s next passenger car in the US, the Corona, would find much greater success, but it was the Crown that brought Toyota to our shores. 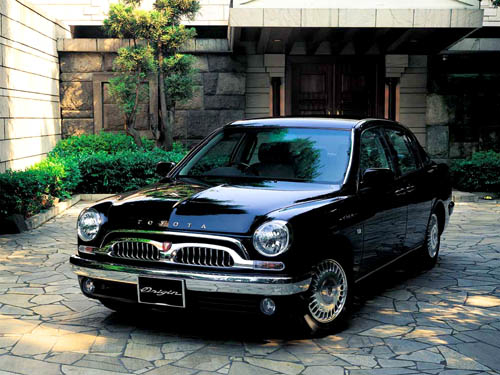 While it was not the first Toyota, the company’s success can arguably be traced to the Crown. Over the years, the nameplate has remained one of the backbones of the Toyota lineup, serving everything from taxi duty to ferrying middle-management executives in comfort and understated luxury. In recognition of its importance, Toyota created the Origin in 2000 to celebrate cumulative production of 100 million vehicles. Based on the Progrès, it was styled to be a modern interpretation of the RS Crown. The grille, head- and tail-lights, rear greenhouse, and the suicide rear doors all harken back to its ancestor. Appropriately, it was powered by the inline-6 2JZ, the workhorse of Toyota sedans and coupes.

Assembly took place at Kanto Auto Works by the same team that builds the Century. Just over 1,000 were produced, priced at roughly twice that of the Progrès. As an outright retro-design, the Origin may elicit polarizing reactions not unlike the Jaguar S-Type or older XJs. However, this was a low-volume commemorative model that was essentially a gift Toyota gave to itself and those who understand and appreciate the significance of the RS Crown. To my eyes at least, its looks and details are rather charming and stately. 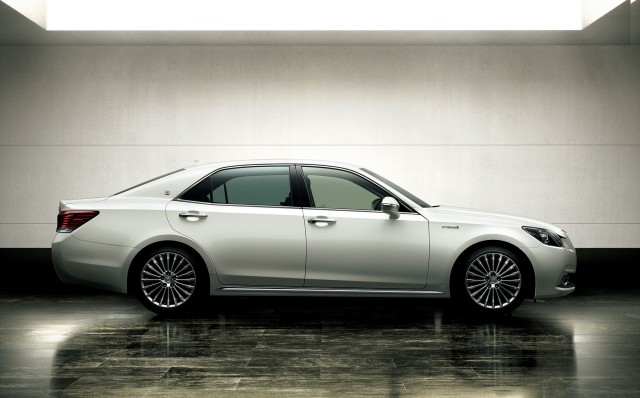 Today, the Crown is alive and (relatively) well in the home market. However, with Lexus proliferating in Japan, its relevance may be becoming questionable. What is not questionable is the heroic status of the original Crown. It marks the beginning of the modern Japanese car industry, and it emboldened Toyota to wade into the American market, beginning with those thirty cars that arrived in Los Angeles in 1958. 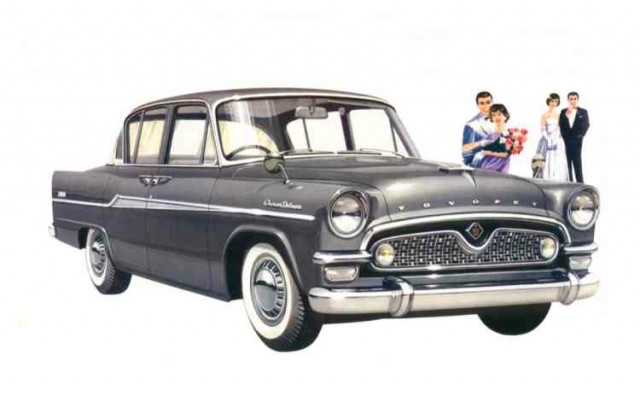 Almost sixty years hence, Toyota is now uprooting its US headquarters from Southern California. As one who proudly calls California home, who grew up in “Toyota-land” practically next door to the biggest Toyota dealer in the world, I am sad to see it go. An end of an era, beginning of another. Anyway, if you ever come across a Crown and your friend asks, “What kind of Metropolitan Nash is this?” share with them its importance to all the classic and nostalgic machines that we all love. And if you ever have the opportunity to preserve one, you are a lucky gear head because it is a veritable milestone of automotive history.

permalink.
This post is filed under: Faux-Stalgics and
tagged: crown, origin, toyopet, toyota.