Fast Eddie and the Skyline 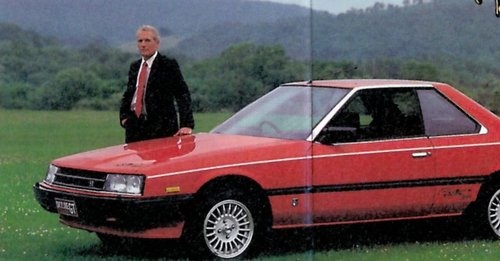 As a follow-up to Ben’s post a few days ago on Paul Newman’s passing, here’s more on his association with the Skyline.  Check out Youtube (do a search for “skyline CM”) and Newman would be most visibly linked with the R30 series, having done quite a lot of commercials for that generation of Skyline.

In fact, Newman was asked to be the spokesperson for the new Skyline range when the R30 replaced the C211 series.  The C211 was beginning to falter in the Japanese market, and so Nissan felt that a return to the Skyline marque’s sporting roots was in order.  This necessitated a change in image too, and Newman’s distinguished and athletic visage fit the bill perfectly and his impeccable motorsport credentials didn’t hurt either.

Now that Ken and Mary were unemployed (they still cropped up in C211 Skyline Japan commercials), Newman would figure quite big in the ad campaign for the R30 series.  Not only would he do the TV commercials, but Newman would also be found gracing the covers of Skyline catalogs and promotional material, and not only for the high-performing RS Skyline model but the whole range.  Much of the R30s promo material described the new generation as “New-Man Skyline”. 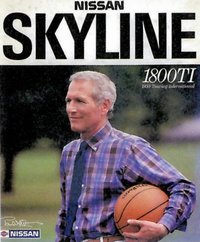 There was even a “Paul Newman Version” R30, which strangely was not based on the sporting RS or RS Turbo models. The Newman edition was based on the turbo 145hp GT-ES model, which was the luxury cruiser of the range.  The Newman Version comes fully loaded, and is distinguished by stickers on the bonnet and lower rear quarters bearing Newman’s signature (which is also embroidered on the front seats).

The Skyline is Terrific!  And the man himself wasn’t so bad either.

1 Response to Fast Eddie and the Skyline