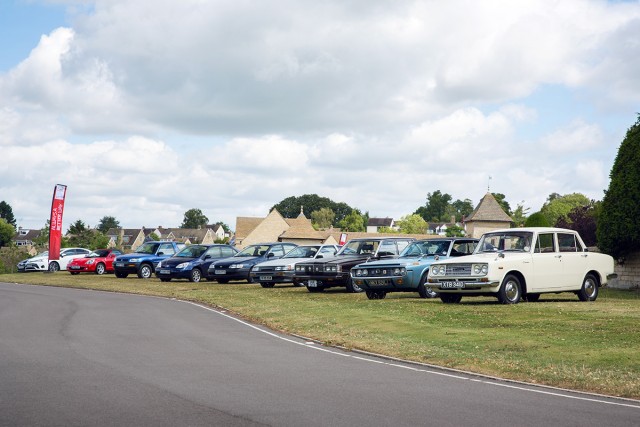 In 1965, a motorcycle distributor named Pride and Clark became the first company to officially sell Toyotas in the UK. Toyota recently celebrated 50 years in the United Kingdom with a gathering of classics, many of which had their own local flavor and were models never sold in the US. 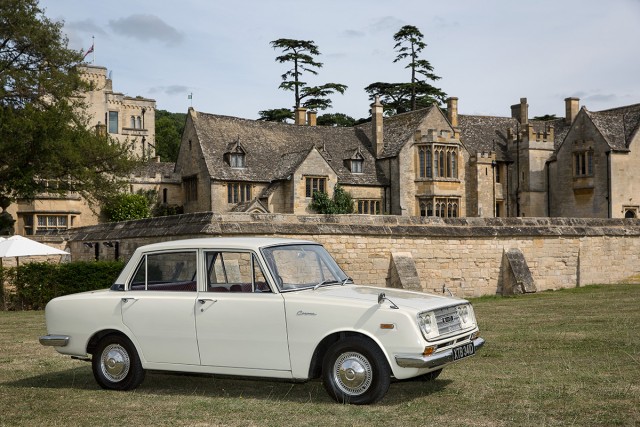 That first car sold in Britain was an RT40 Corona. Having learned their lessons from a difficult launch in the US market, where its offerings — including the S30 Toyopet Crown and Tiara — stumbled initially. They were developed for Japan’s roads, which were local and low-speed, and did not suit western tastes. 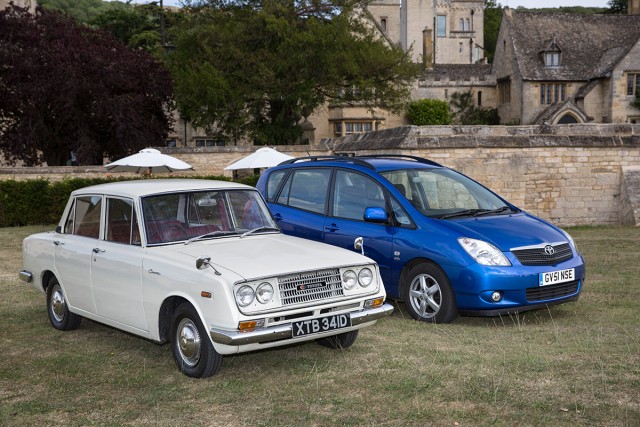 Toyota then developed the Corona, a compact specifically tailored to sell abroad, in countries where wide expressways connecting distant cities were the norm. Though a compact in the US, it was considered a midsize in the UK. The average car there is considerably smaller, and even today a Yaris sometimes feels like it’s pushing the boundaries on some of the narrower roads and parking spaces there.

Launched at the Earl’s Court Motor Show in 1965, it was set to compete with popular British cars like the Ford Cortina and Vauxhall Victor for the price of just £790. This particular Corona, which was added to Toyota UK’s heritage fleet in spring of 2006, is a 1966 model. 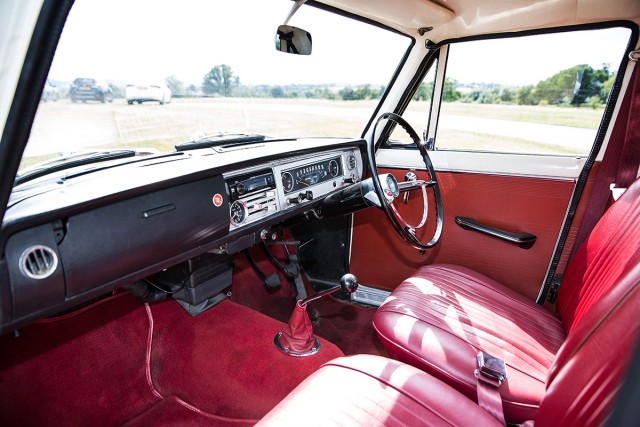 Finished in an especially fetching white with red interior combo, it had been displayed at a UK Toyota dealership for much of its life. Aside from a repaint 10 years ago, a new carb in 2008, new leaf springs, refurbished hubcaps and the addition of a modern stereo, it is all original and incredibly well preserved. 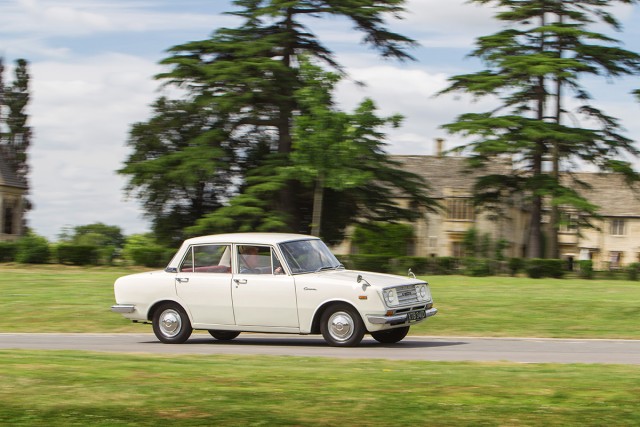 Toyota still uses it for car shows, press events and hillclimbs. estimates it’s worth about £6500-7000 today. It also happens to be one of the two oldest Toyotas still registered in the country. 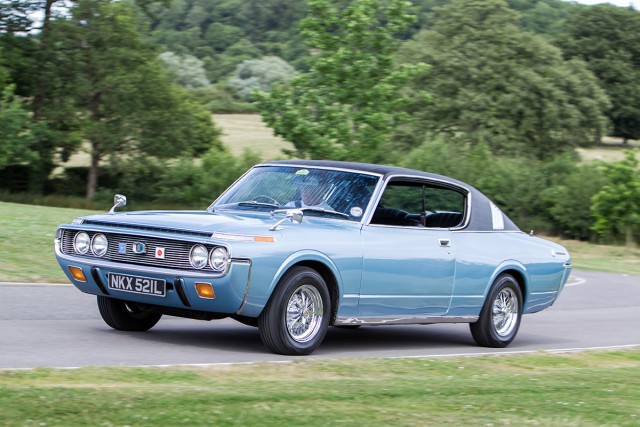 In contrast to the simple runabout that was the Corona, the MS75 Crown was grand and gorgeous. Imagine a personal coupe this size in a country where Detroit land yachts never existed. Equipped with a 2.6L straight six, air conditioning, power steering and an 8-track player (but seat belts were an optional extra!), the automatic version (a rarity in the UK) sold for £2303 when new. 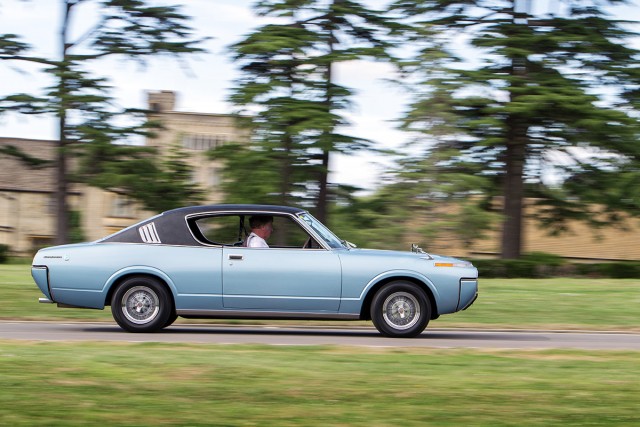 An early ’70s British ad for the kujira Crown included the tagline, “Whatever you collect, include a Toyota,” as a kujira posed by a Ming vase, Greek statue and priceless paintings. The owner, a JNC forum member, took that advice to heart and preserved this incredibly beauty. This exact car was even used in the Fuji Speedway scenes in the filming of Rush. 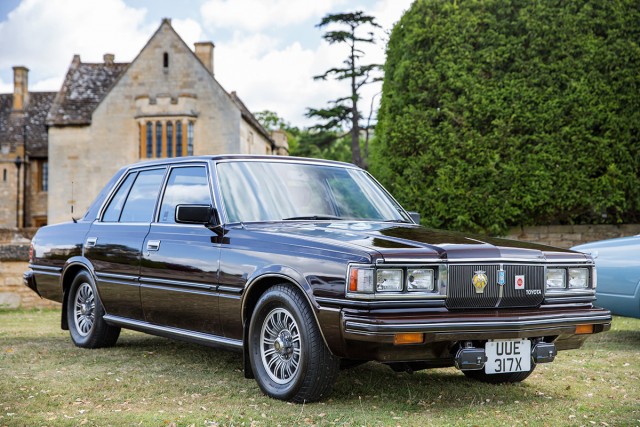 In the US, the kujira Crown seen above was the last generation imported, after which the mantle for large Toyota sedan (ahem, saloon) was then passed onto the Cressida. In the UK, the model line apparently continued until at least the S110 generation of the late ’70s and early ’80s. Color us jealous. Gliding through the British countryside in such stateliness is surely one of life’s finer pleasures.

The 1992 Carina E was the first British-built Toyota, made at the plant in Burnaston, Derbyshire. Technically it is of the T190 generation, but according to Toyota the “E” stood for “Excellence in Europe” and indeed it seemed to fulfill that destiny in 1993 when it won Irish Car of the Year. It was available with engines ranging from 1.6 to 2.0L and in saloon and five-door liftback body styles. The top-of-the-line GTi sported a 130hp 3S-GE and won two BTCC championships for Toyota, in 1994 and 1996.

Other cars present for the golden jubilee celebration included an AE86 (sold in the with the Corolla Levin’s fixed headlights rather than the flip-up Trueno units), an MR2 Spyder, and a 5-speed 2-door RAV4 that is probably the world’s most thoroughly restored (see parts 01, 02 and 03).

The official Toyota UK blog also reminds us that the history of Toyota and the UK date back to 1929. At the time, Toyota was a weaving loom company. After traveling to Britain, a young Kiichiro Toyoda sold the automatic loom technology his family had invented to the Platt Brothers & Co. of Oldham for £100,000. Upon returning to Japan, that amount became the seed money he needed to start the automotive division of Toyota, and the rest is history.