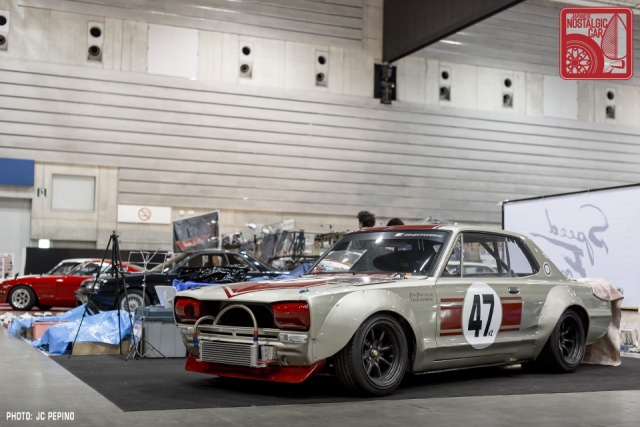 When Nostalgic Hero lists their top Japanese classics of all time, the winner is not a Nissan Fairlady Z, Mazda Cosmo Sport, or even at Toyota 2000GT. It’s the KPGC10 Skyline GT-R. Whether you agree with the choice or not, there’s no denying that at a two-day event organized by Nostalgic Hero, the Hako is going to reign supreme. 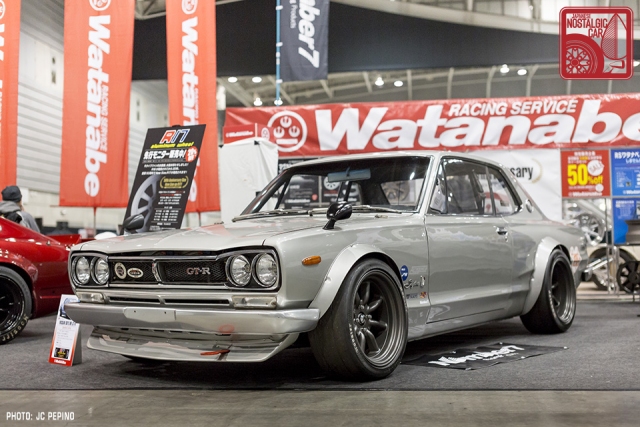 In Part 01 we saw the Rocket Bunny Z that graced the RS Watanabe booth, but accompanying it was a mean silver Skyline. The Hako was there to show off the new R17 wheel, a 17-inch diameter version of its iconic R-type 8-spoke. Amazingly, they don’t throw off the proportions, but much of that likely has to do with diligent adjusting of the ride height and clever shaping of the fender flares. 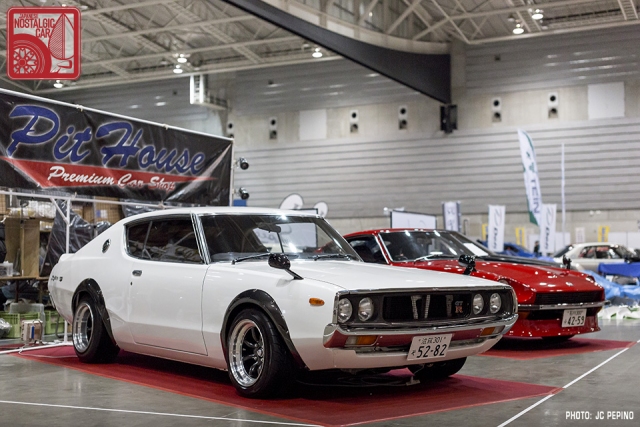 Shiga Prefecture’s Pit House brought out a Kenmeri. Though we didn’t get to peek under the hood, we’re pretty sure it’s L28-powered. However, like most Skyline shops they’ll works on a variety of Nissan mills, from L- to RB-series. 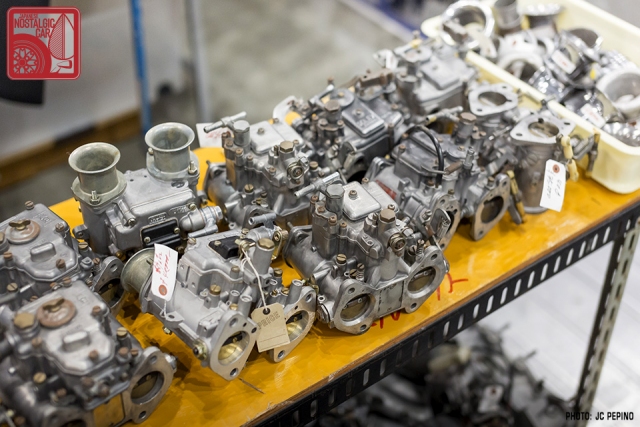 Nearby, a pile of racing carbs worth their weight in gold awaited new owners. 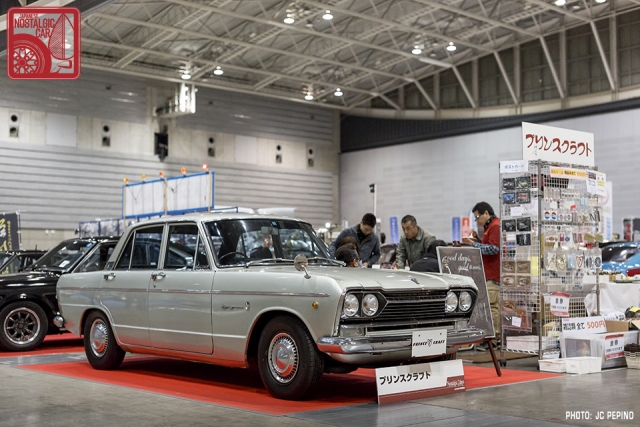 The Skylines weren’t limited to those from the Nissan era. Prince Craft came all the way from Nagano prefecture with a very original looking S54 Skyline 2000GT exemplifying the kind of restorations they specialize in. The company restores all manner of Prince models, and makes out-of-production parts like gasket sets to keep them on the road. 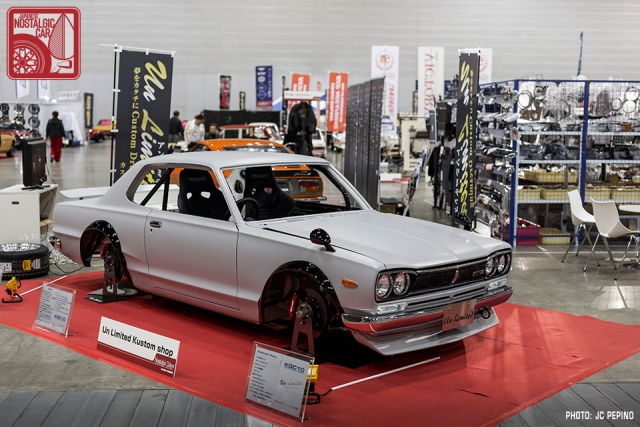 UnLimited Kustom Shop is based in Aichi Prefecture and is known for building gorgeous restomods in which the engine are not only functional, but works of art. They’re so proud of their motors that they always display one outside of the car on a stand.

Last year they wowed us with a gorgeous 6M and accompanying Soarer. This year, it was a Hako and its corresponding L-series with a beautiful takoashi (octopus leg) exhaust header and a bank of Mikunis. Both had their valve covers finished in the shop’s trademark wrinkle coat blue. 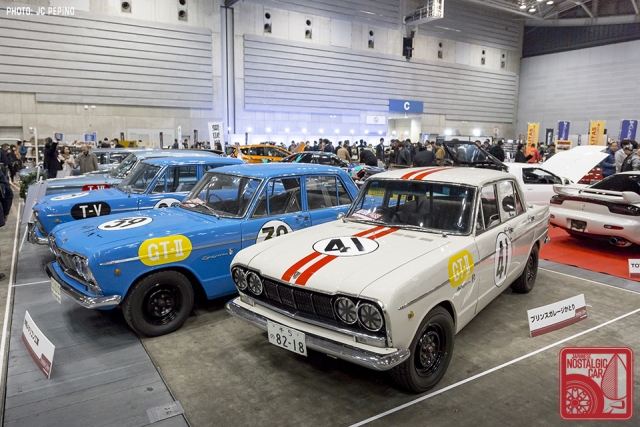 Interest in the original Prince Skyline seems to be on the rise thanks in part to word of its legendary competitions reaching the west (and perhaps a few high profile stories). In particular, it appears that it is the racing replicas of the 1964 Japan Grand Prix competiton cars that have captured imaginations

The replica of Yoshikazu Sunako‘s blue No. 39 car was brought over by a firm called Shinto Metallicon, which sounds like the name of an awesome Transformer but as far as we can tell is a firm that sprays molten metal coatings in industrial applications like ships and bridges. Perhaps the owner is a fan.

The replica of the white and red No. 41 car in which Tetsu Ikuzawa made the historic pass was built by Prince Garage Katori, which specializes in building FRP parts for old Prince and Nissan models. 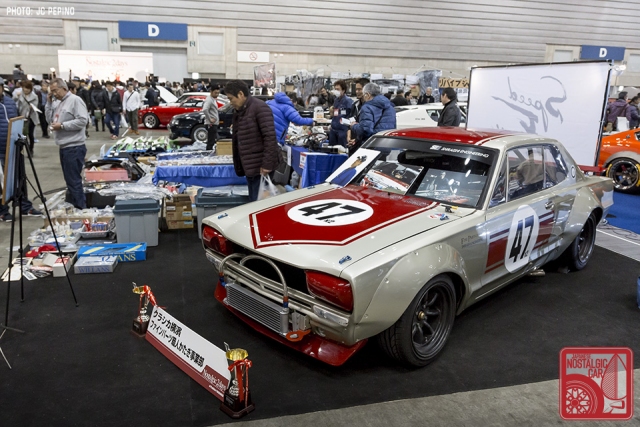 A beautiful Hakosuka vintage racer looked every bit the part of something that would have been tearing down the Fuji straight in 1971. Beautiful as a static display, this particular car is also a regular at vintage races in Japan as well.

At the Panasport booth a resto-modded Hako was on display along with a classic Suzuki GS 1000S. With NACA ducts, gratuitous venting, and more buttons on the dash than the Space Shuttle, it is most certainly a demon on the track. Also on display were Panasport’s Racing G7 4-spokes. 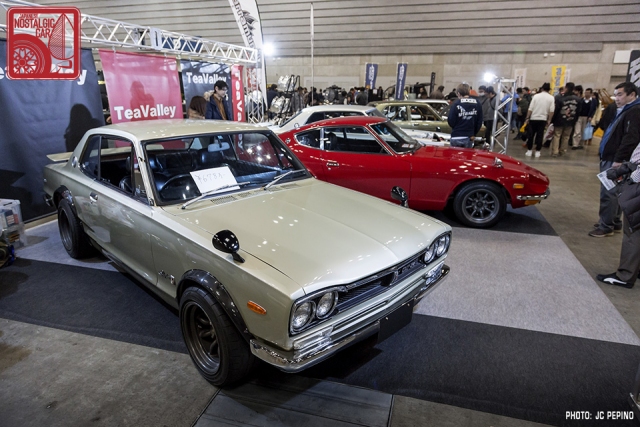 We saw Osaka-based Tea Valley’s Fairlady Z in the previous installment, but it was flanked by Hakosuka Skylines as well. A restored by not entirely original example carried a price tag of ¥6,780,000, or about USD $61,231 at today’s exchange rates. 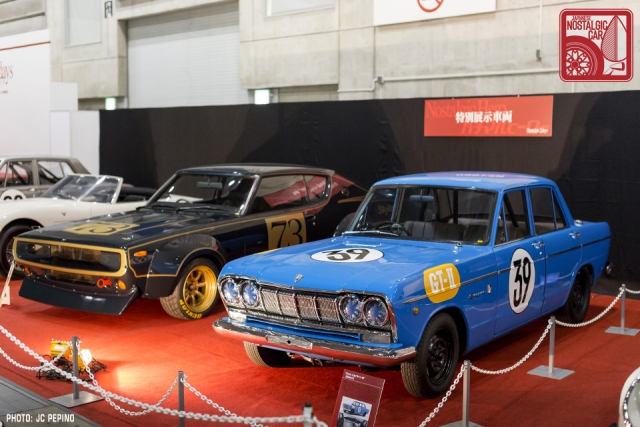 Nissan brought out a couple of cars from their own Zama garage, including their own version of the Sunako GP Skyline, as well as the legendary Tokyo Motor Show Kenmeri GT-R. 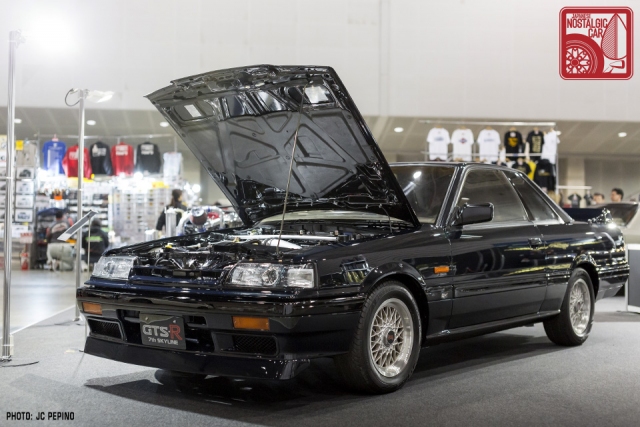 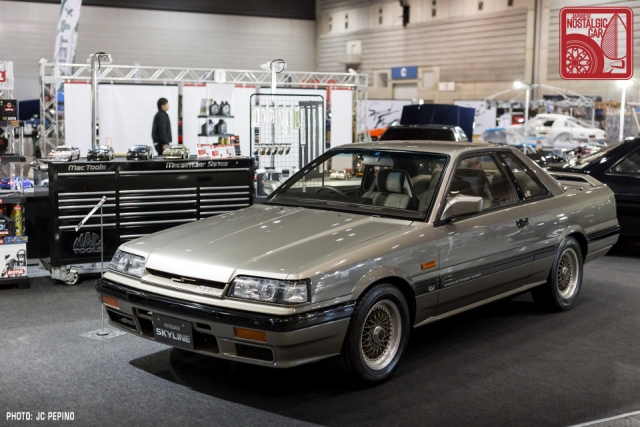 We saw R31 House, the seventh-generation Skyline specialist, at the Tokyo Auto Salon, but unlike many shops they brought a completely different pair of show cars to Nos2Days. The R31s here veered towards originality rather than restomodding, with both a GTS and a homologation GTS-R proudly on display. 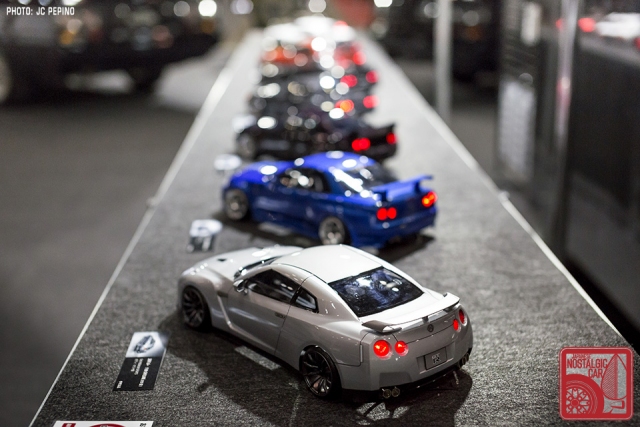 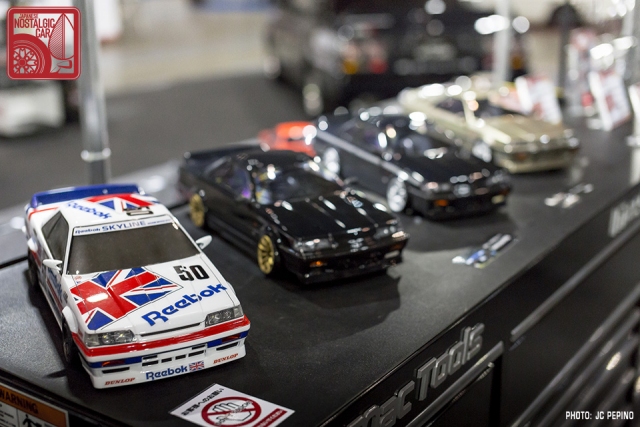 Of course, R31 House’s lineup radio control cars featuring every generation of Skyline was back, with a special focus on variations of the R31 generation.

Kusaka Engineering is continuing to churn out highly detailed 1:6 scale versions of Skyline motors. Having essentially replicated models of stock engines from S20 to RB26DETT, they are now starting to make tuning house specials, including engines from Top Secret and OS Giken. For more on Kusaka Engineering’s scale motors, see our coverage from 2016. 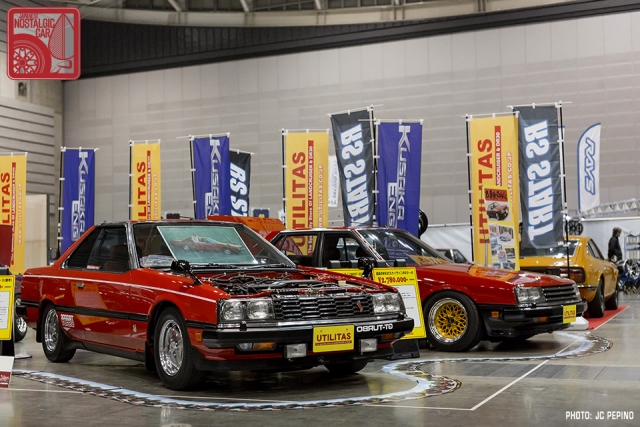 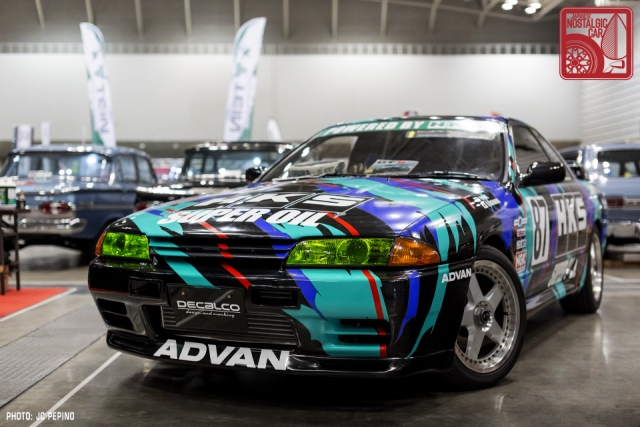 DecalCo, the Japanese company specializing in stickerizing cars, came this year with an R32 GT-R in classic HKS livery. The complex graphics are no small feat to replicate — and far more intricate than the Suzuki Alto Works RS/R decals from last year — but the company has a lot of experience replicating the liveries of classic rally and race cars. 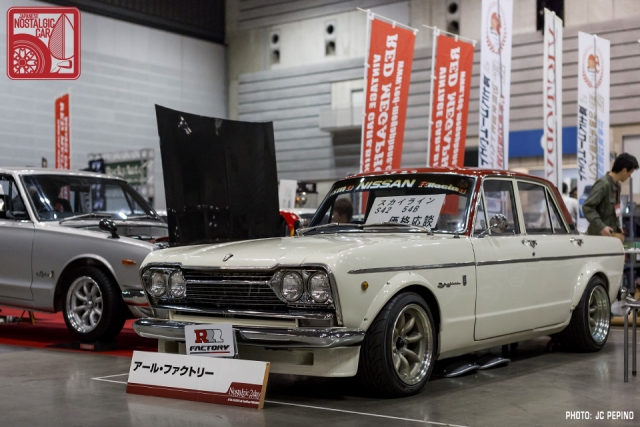 Though R Factory claims to be specialists for the S20 engine, they actually work on and restore a variety of cars, as evidenced by this newly resto-modded S54B Prince Skyline. Finished in what is probably the best factory color scheme — white with a red roof — added flares, a front air-dam, and Watanabes give the classic Skyline a meaner look than most. 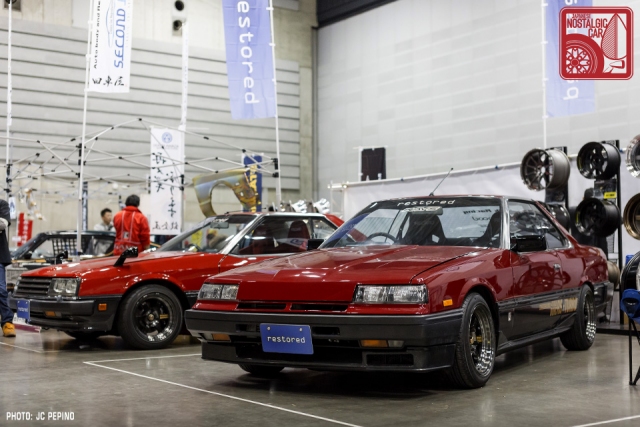 Restored was showing again its composite DR30 body panels. These sixth-gen Skylines might look like stock zenki and kouki versions, but most body panels have been replaced with FRP and carbon substitutes.

Skyline tuning house Victory 50 came with a bevy of Hakos, including the shop’s Kunimitsu Takahashi replica and a new build with an OS Giken TC24 motor. 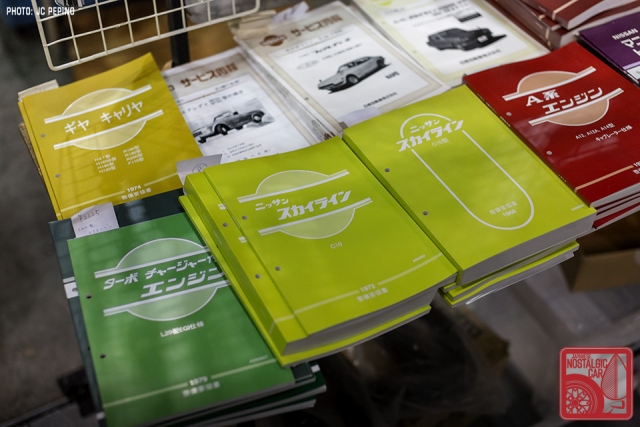 With all the shops working on vintage Skylines, you may not ever need your own shop manuals. In case you wanted to turn your own wrenches, however, they were available as well.