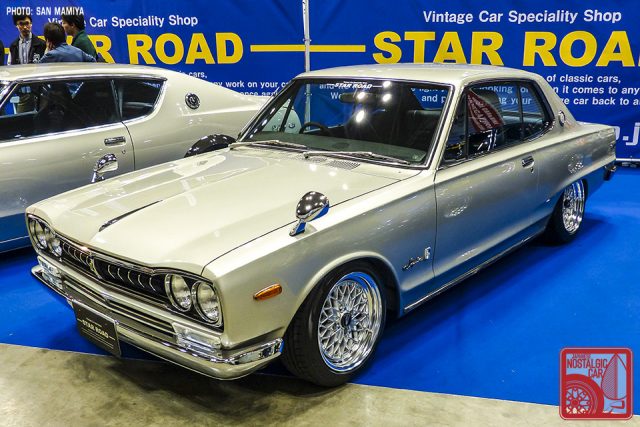 For our second installment of the 2016 Nostalgic 2 Days event coverage, we’ll take a look at some of Japan’s kyusha tuning houses, beginning with our friends at Star Road. The Tokyo-based specialists of classic Skylines and Fairlady Zs typically holds court at one of the biggest and most eye-catching displays of the show, and this year was no exception. 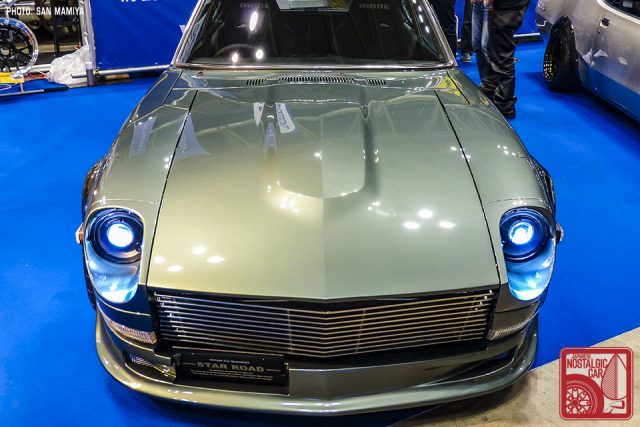 Star Road’s specialty is building nostalgic cars that are fast and comfortable, with all the modern accoutrements one could want. Upgraded gauges, navigation, infotainment, electric power steering, a modern electrical system, LED headlights so you can see where you’re going, stereos that are actually audible, and stronger alternators provide the driving experience of a new car, but wrapped in a classic body. 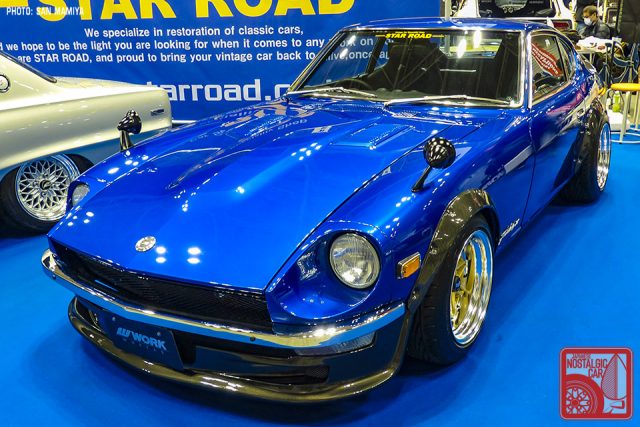 Back in the day, having ice cold air conditioning on a Mikuni-fed L28 was a pipe dream. But Star Road somehow manages to retain the use of tuned L28s — albeit bored to 3.0 or 3.1 liters — but making them user friendly enough that you can still run Mikuni-Solex 44 or 50 carbs with ice-cold aircon. They’re fast, too. You can gun it on Wangan but in everyday driving they’re still docile. 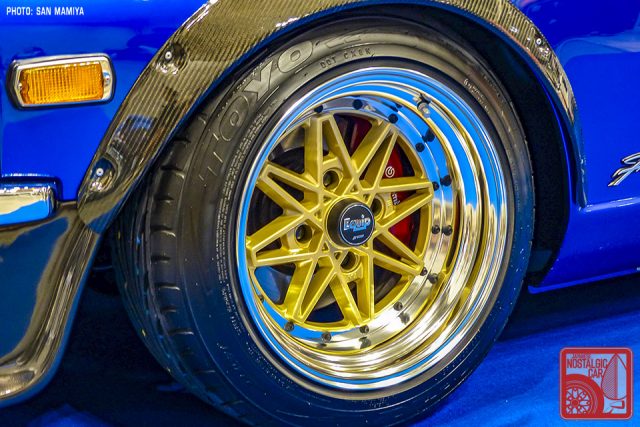 Star Road’s cars offer something for all tastes. You want a stock Skyline with surf line in tact? See the lead photo. You want a resto-mod that looks like it came straight from the pages of Wangan Midnight? Then there’s the blue Z, the shop’s original demo car wearing the classic Work Equip 03s again (Keiichi Tsuchiya even drove this car in Hot Version Vol. 87 a decade years ago). 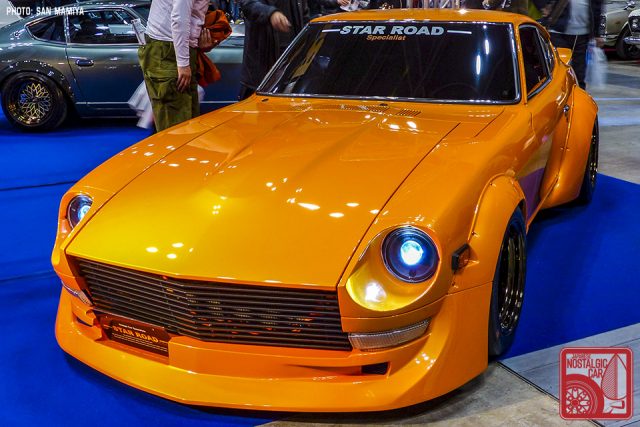 Want something with a few more radical custom touches? There’s the gray-green resto-mod that fits the pro-touring style to a T. Want something that emulates a race car? There’s the orange one, with a modern interpretation of the old Yanagida Z and works race cars of old.

The beauty of these cars, though, is you don’t need to change the chassis, fabricate wheel tubs and new panels from raw metal as you would with an Art Morrison-framed Camaro. The suspension may be adjustable, the engine may be updated with a more refined tune, but it’s still using the original bones from the 1960s. 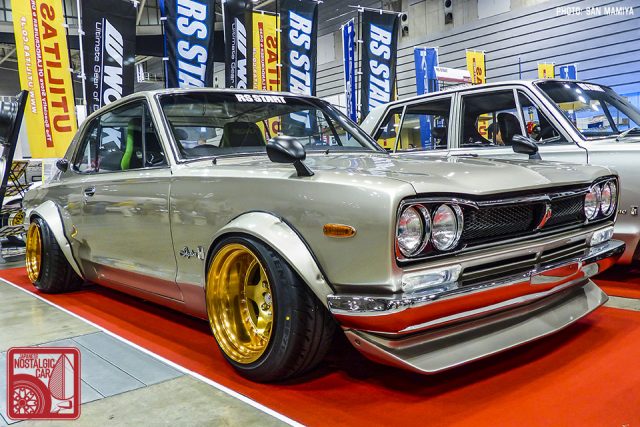 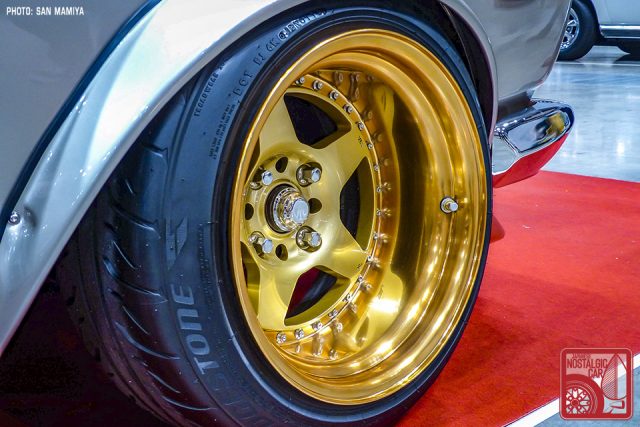 In Part 01 Skorj didn’t think much of the RS Start Hakosuka, but it’s more than just another stanced Skyline. While the lime green kevlar Recaros and anodized gold wheel lips are jarring, the shop is known for high end, all-out performance when it comes to classic Nissans. The radically angled fender flares are a work of art, especially when combined with tires that are small yet somehow manage not to look wimpy. This car epitomizes the delicate balance of hippari tire and tsuraichi fitment, something that’s perceived to be so simple, yet something seemingly so difficult for us to get right in the states. 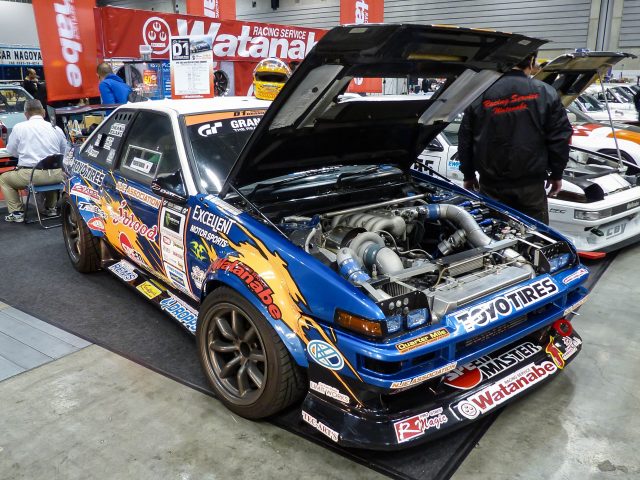 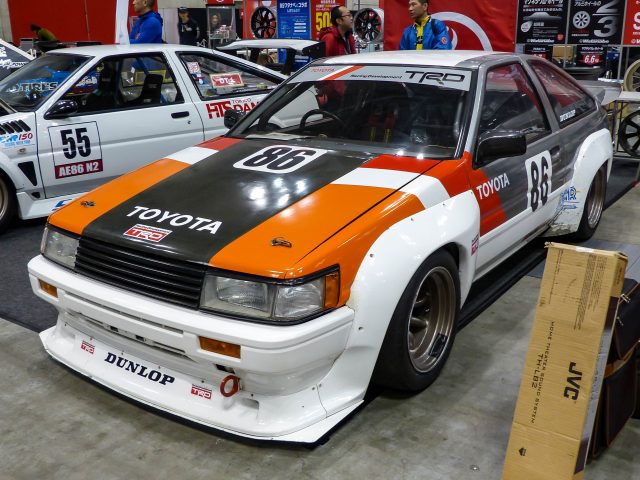 The RS Watanabe display had a fleet of famous AE86s, from Yoshifumi Tadokoro’s D1GP drift machine to Keiichi Tsuchiya’s TRD AE86. The latter is considered to be the ultimate AE86 race car, personally built by the late Tadao Sakurai of TRD Technocraft before he passed away. Sakurai-san was involved in countless Toyota race programs in which he developed, designed and created many parts and tuning methods for a range of iconic Toyota models, most notably the N2 AE86 program. For this special build, he incorporated every trick learned over the decades into a single car. 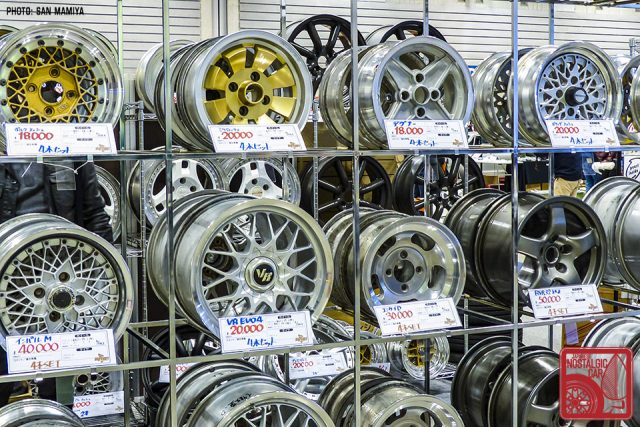 Nearby, a wall of wheels was offered for sale at some amazing prices. A set of Rays Engineering’s very first Volk Racing wheel (top left) — which graced the Dome TOM’s TE71 Corolla race car when new and was advertised with the X-Ray play on words — are listed at only ¥18,000 ($180). A set of rare Degner four-spokes (top, third from left) are marked at the same price. 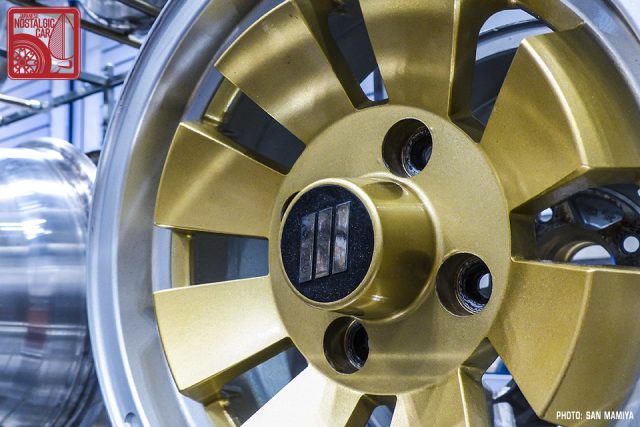 This 8-spoke looks plain, but it’s actually the first Michelotti-designed wheel for the Japan market in sizes made for Japanese cars. Resembling the wheels on a Lancia Fulvia HF, it didn’t sell well at the time, but that’s what makes them rare today. It also served as the precursor to a wave of Italian designer wheels by the likes of Giugiaro and Pininfarina that came after, all made for the Japan market. 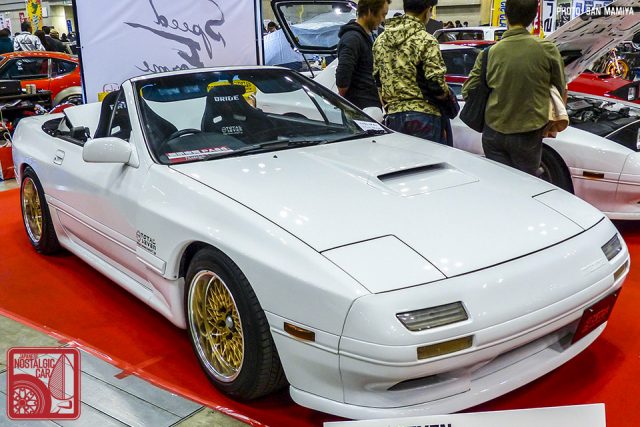 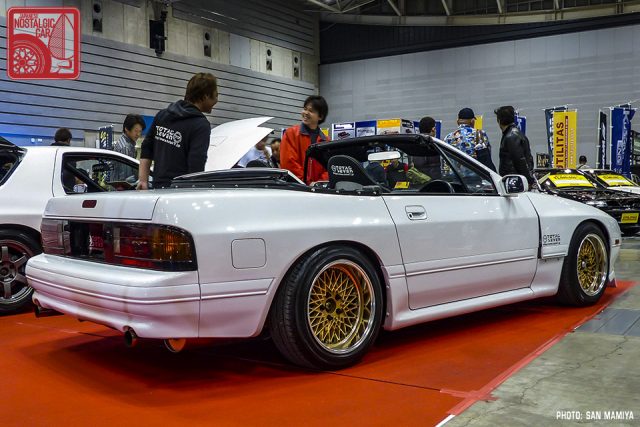 Total Seven specializes in restoring and reconditioning second-gen Mazda RX-7s. Even a minor lowering doesn’t leave the typical FC3S with a lot of clearance in the front, especially when turning. Therefore, Total Seven has offered a more contemporary solution to the dilemma. 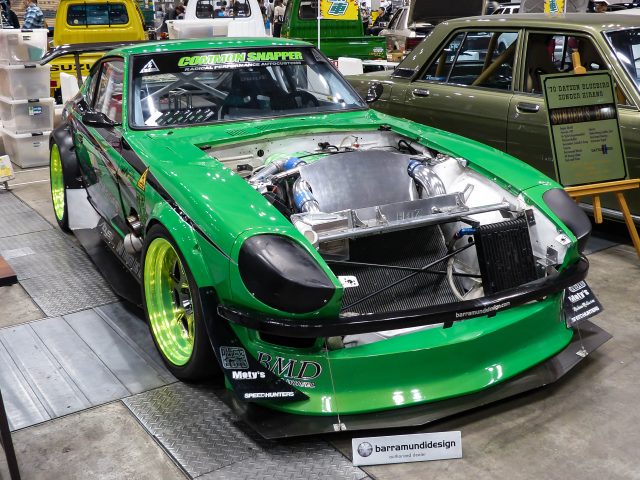 Common Snapper is probably best known for its Barramundi Design wheels, but the shop was a pioneer of the Honda S2000 F20C transplant into 510 Bluebirds. They seem to specialize in insane swaps, as the shacho‘s own personal demo car is a Fairlady Z powered by a Mazda 3-rotor. 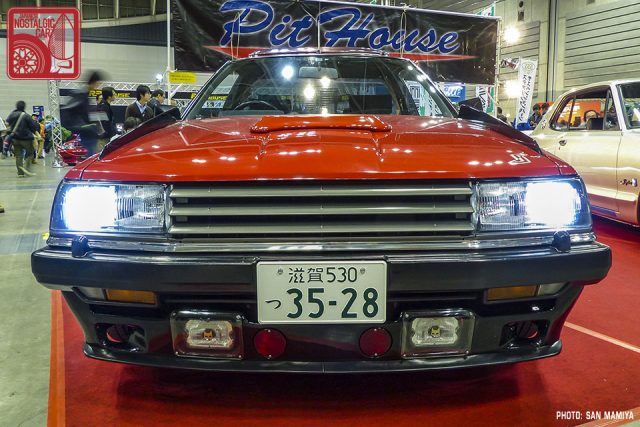 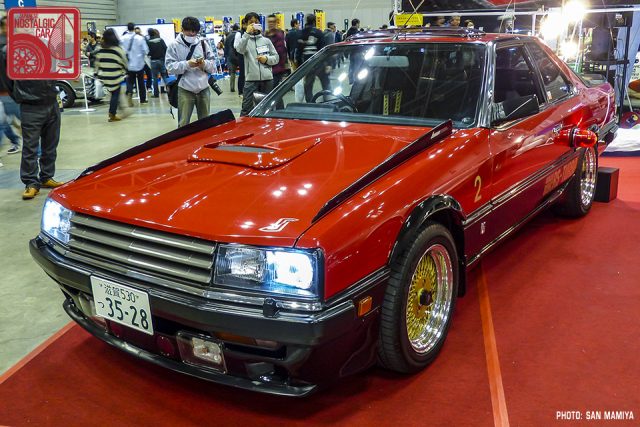 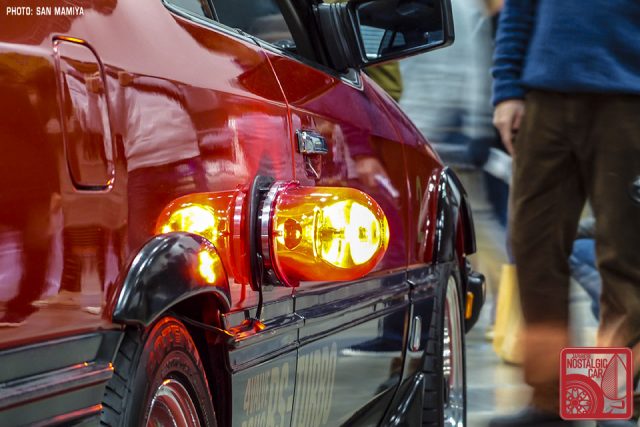 Pit House proved that the Japanese public will never tire of the Seibu Keisatsu Skyline. For every Initial D AE86 there’s a police DR30 to draw the older generation. It’s the equivalent of Eleanor in Japan. This replica is notable for wearing fully restored 2-piece Enkei 92s with their original center caps. 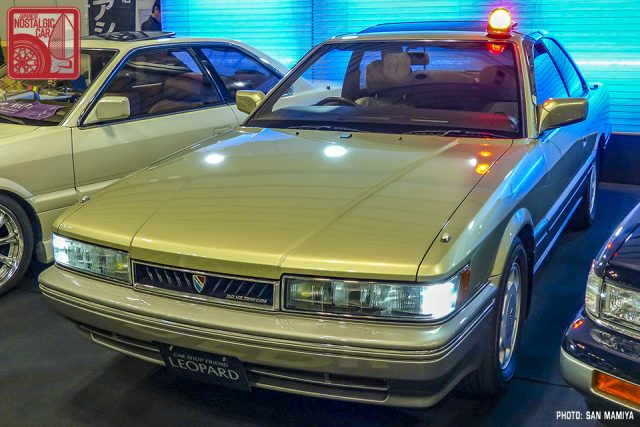 A slightly less renowned but still popular star car hails from the 1980s series Abunai Deka (Dangerous Detectives). A replica was displayed at the booth for Car Shop Friend, an F31 specialist, alongside several other Nissan Leopards (aka Infiniti M30). Like the Seibu Keisatsu DR30, LED lights have been retrofitted, seemingly the new trend for kyusha in Japan. 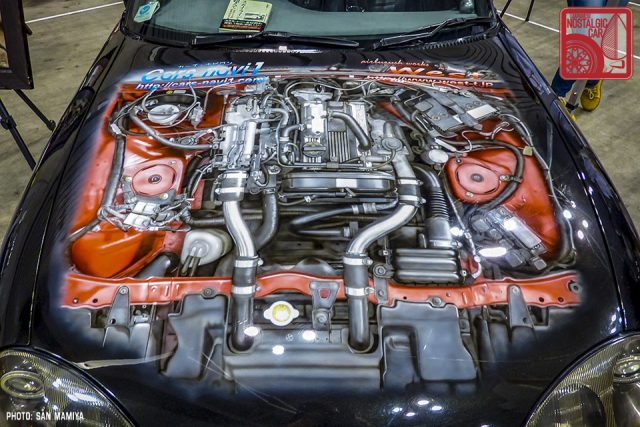 For a quick and dirty street fighter or touge battler, Japanese tuners will often skip painting the engine bay. The brilliant thing about the Suzuki Cappuccino displayed (at a booth showcasing the skills of an artist whose name we failed to catch) was that despite the incredible detailed rendition of the motor — which could have been depicted any way he wanted — the engine bay is still a different color. Now that’s attention to detail! 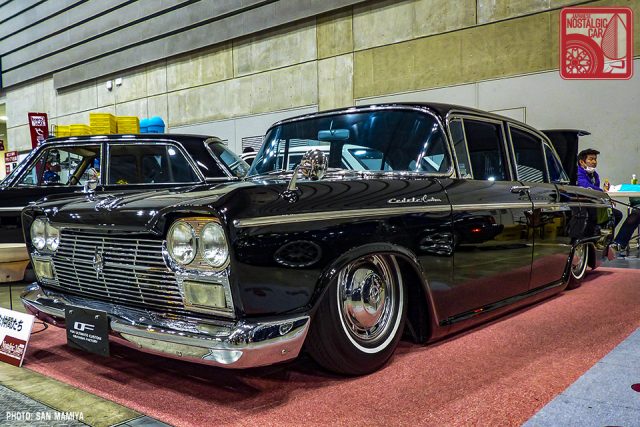 We first saw this lowrider 31-series Nissan Cedric 1900 at the Tokyo Auto Salon earlier this year. Slammed on airbags, it’s a captivating interpretation of an otherwise little-loved car. And of course, the lighting has been modernized. 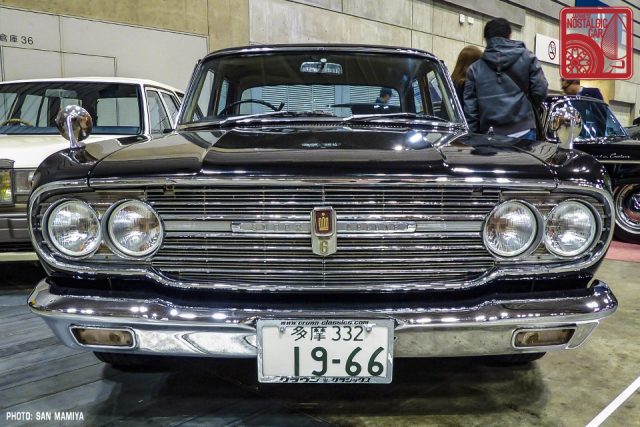 Our friends at Mooneyes showed up of course with one of their trademark impeccably resto-modded S40 Crowns. The vanity plate is, of course, brilliant, as is the “6” — as in inline-six — emblem in the grille. 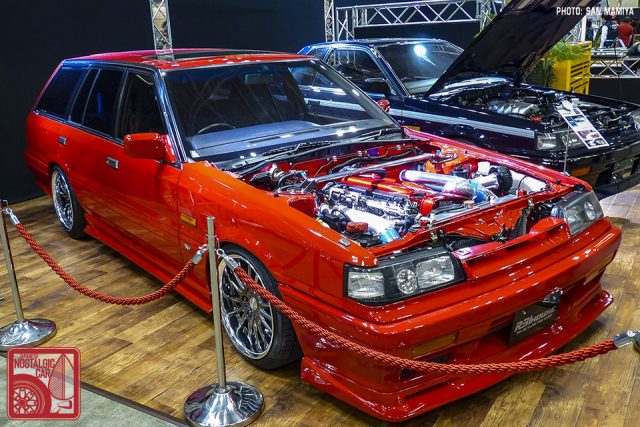 The tuning shop R31 House specializes in — you guessed it — R31 Skylines. However, this year they’ve chosen to demonstrate their tuning prowess with an RB26DETT in a rare wagon body. Next to it was an equally rare TommyKaira M30 (no relation to the Infiniti M30), the famed tuning shop’s interpretation of the ultimate R31. 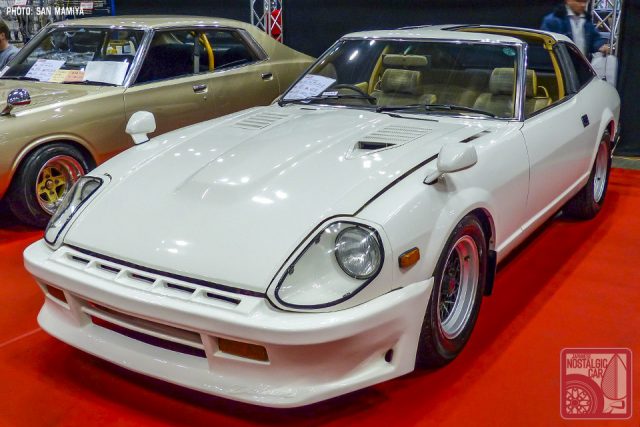 We conclude this installment with a time capsule S130 Fairlady Z 2+2. It’s unusual in that it’s a less sporty four-seater model that is nevertheless wearing what appears to be either an old EVA or Bomex nose. If we had to guess, we’d say it was probably owned by an older person that modified it when it was close to new and just kept it all these years.