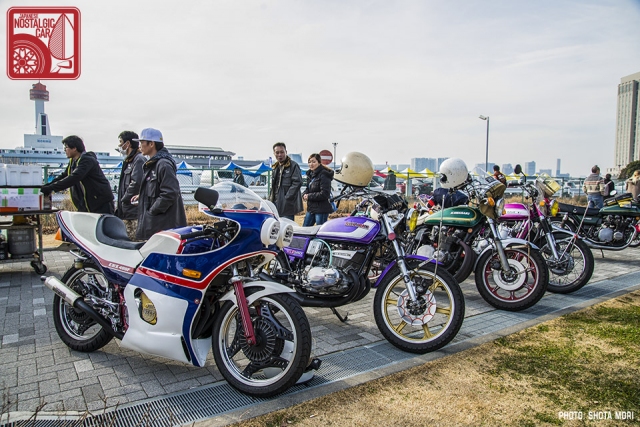 The New Year Meeting is an amazing show, but there is one element missing, one that’s just as much a part of Japanese classic culture as the cars we love: motorbikes. Unlike in the US, where two-wheelers are mostly a weekend toy, in Japan bikes have been used as transportation both personal and commercial for decades. As such, the diversity in type, modification style and aftermarket support run just as rich and deep as that of cars. 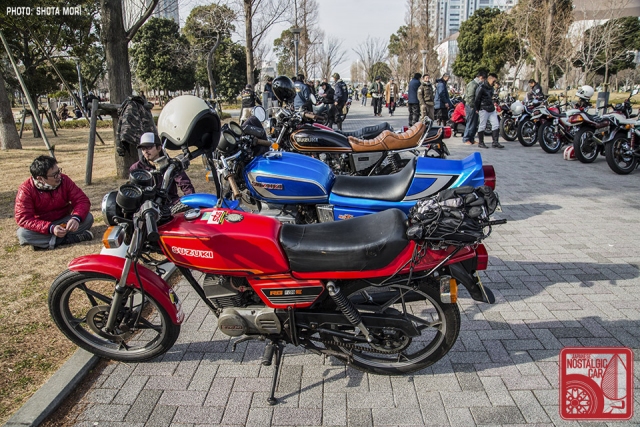 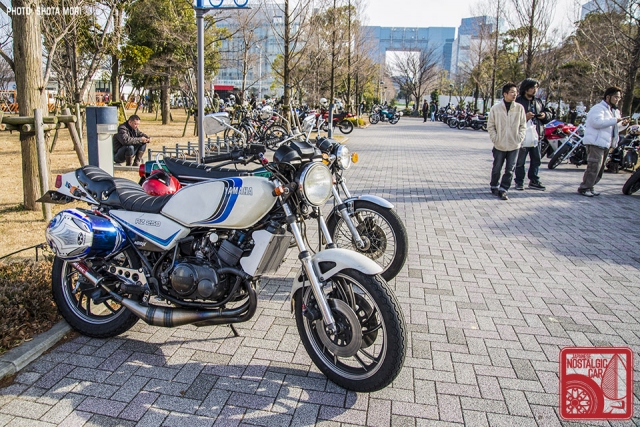 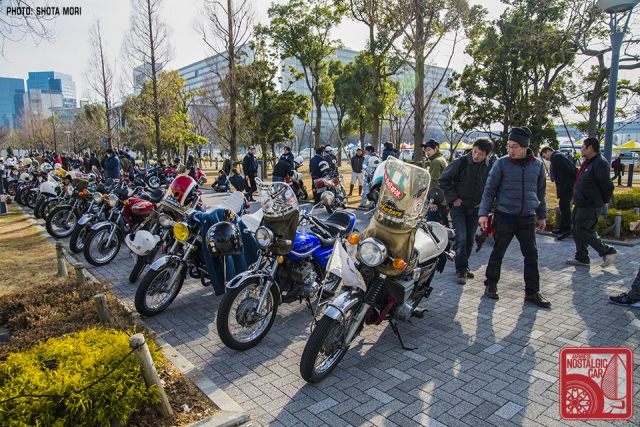 As much as we’d like to see the show rules changed to welcome them, bikes were still present and accounted for. In the parking area and resting along walkways, they lined up for something of an impromptu bike show of sorts.

Motorcycles may not have been easily seen from the show itself, but they could be heard. After spending some time with the Hinos, Sanitoras and Honda Todays, we took a walk to the parking area to see what all the commotion was about.

Unfortunately, I just missed a huge group of vintage Kawasaki Z400FX, Suzuki GS400 and Honda CB400T Hawk II “バブ” customs with raked handle bars reaching for the rising sun of Japan. A few were caught mixing in with the yankii parade of 70s sheetmetal wonders. 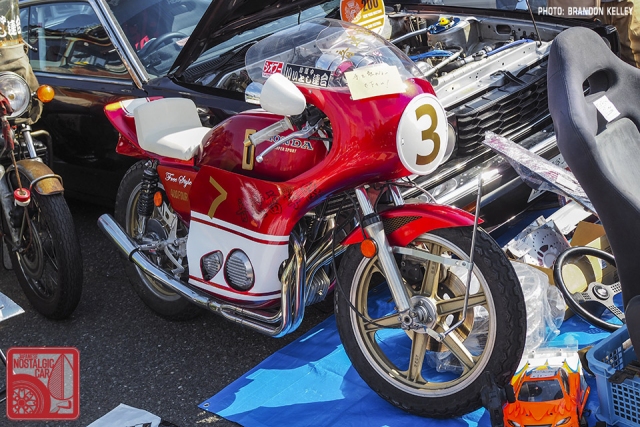 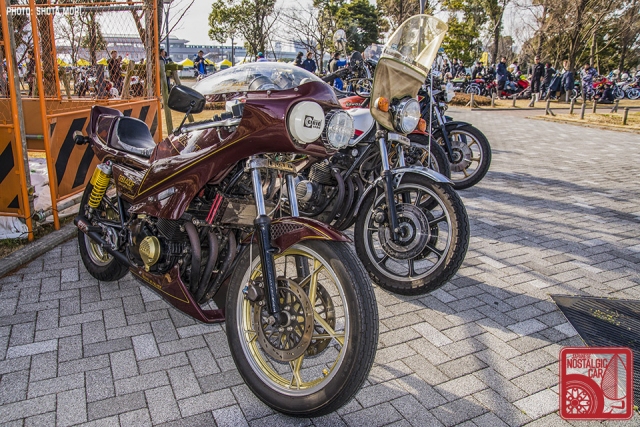 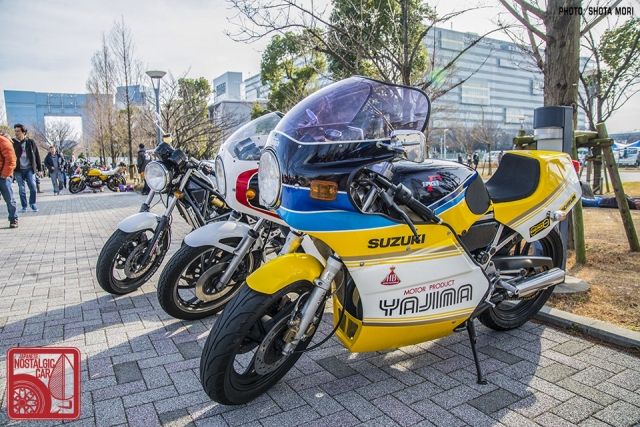 The handlebars are modified in this manner so riders are forced to keep their hands over the tank, keeping their arms  from stretching out while weaving in and out of traffic.

It must be said that although in times of yesteryear such machines were associated with yankii or bosozoku culture, nowadays it’s more good-natured and calm. Everyone was here to show the results of their busted knuckles by celebrate their love of motoring machines. 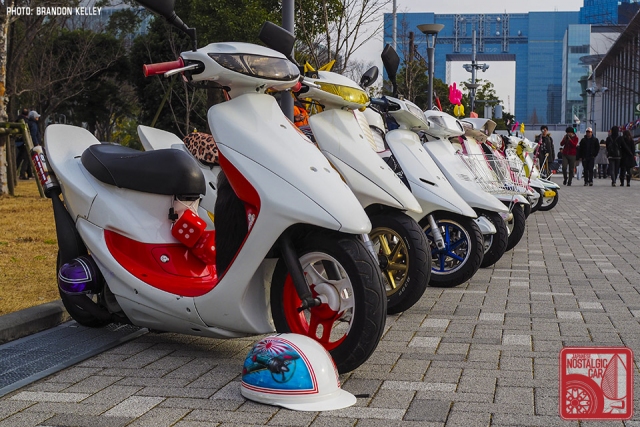 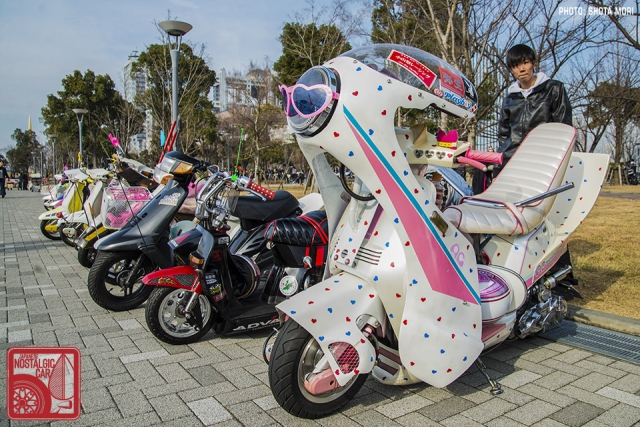 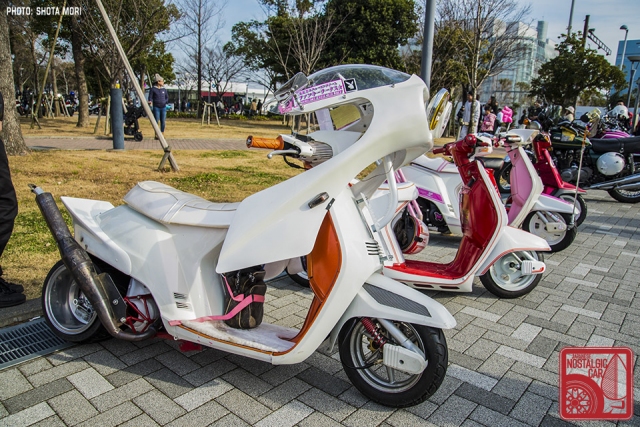 Speaking of which, the gathering brought in a great number of “mini-zoku” scooters. Ranging from 50cc up to 150cc, sometimes with larger engines but never to exceeding 250cc, they are all about the bosozoku style. 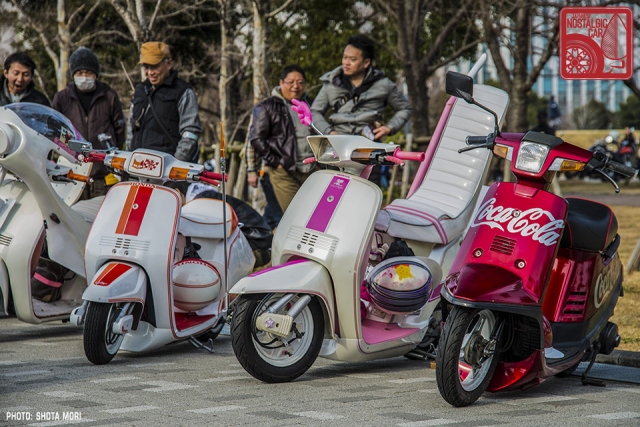 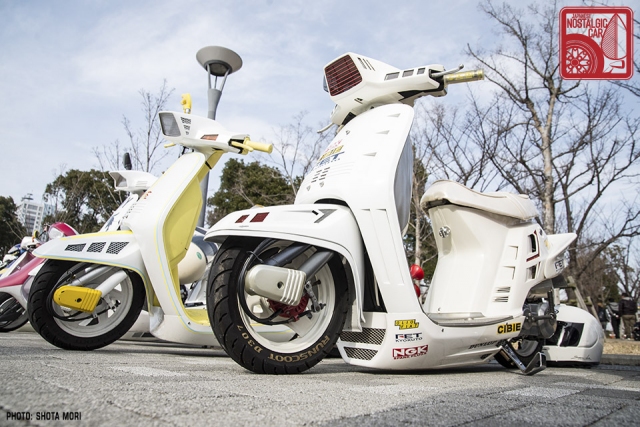 The reason for the 250cc cap is because any two-wheeler above 250cc requires a biennial vehicle inspection known as the Shaken. The purpose of the Shaken is to confirm the vehicle is in working order and abides by Japanese motoring laws. By staying below the 250cc threshold, enthusiasts can go nuts on their styling without much worry of having the number plate stripped from the cowl.

Popular models are Honda Tact and DJ-1 scooters, often sporting the liveries of special edition tie-ins with fashion lines like JOC or AC Courregés. The latter had a partnership with Honda back in the day and provided many pink and sky blue accessories for both cars and bikes.

One such bike may have very well been the king of air horns, with no less than 10 trumpets alongside an equally loud stretched exhaust. Others wore the liveries of Mobil racing bikes or Coca-Cola.

Another pair of Honda DJ-1s came complete with bowtie and trio of regalia horns. They rode down from Saitama-ken to attend. I never saw the owners but given that the side mirror is a peace sign, it’s safe to say they were some cool cats. 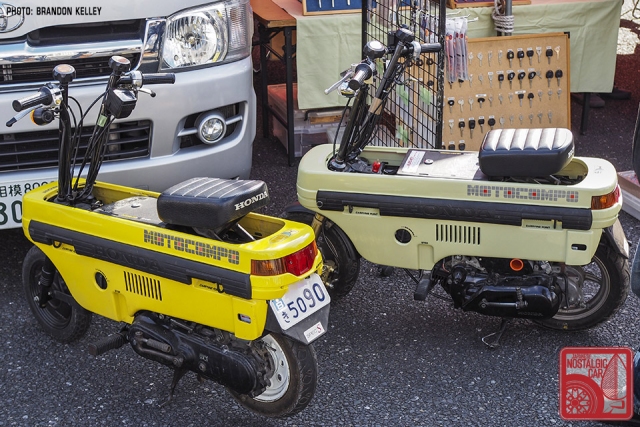 Of course, we can’t have a proper Honda presence without a few Motocompo. A key vendor had two on display but sadly, not for sale (I asked!). A Motocompo has always been on my list of bikes to get and seeing these two sparked my interest again. Which color suits it better, original yellow or BASF muddy tan? 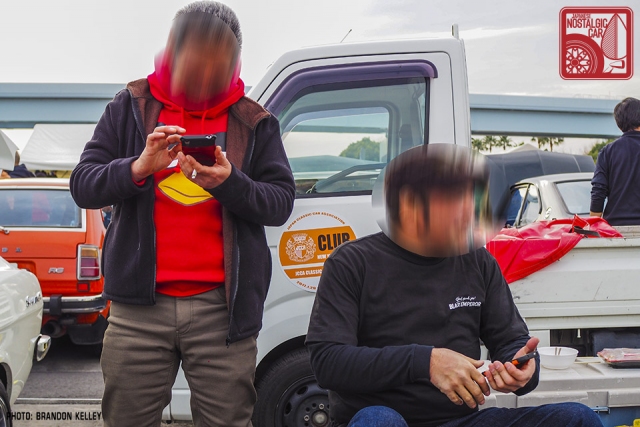 There was one highlight of the show that stood above all else for me. I had a chance to befriend a few of the old guard, including a member of the Black Emperor bosozoku group. We shared a few beers and general chitchat as we showed each other pics of our rides, bikes and experiences. I was skeptical of the claims of who they were until  I saw the pics to back it up. I promised to not post pics of them so I won’t, but I can post a blurred out image. He was especially chill and reaffirmed his roots when I bumped into him boarding the Yurikamome Monorail as he proceeds to smoke… in the train. To be fair, he had quite a few beers.

It’s getting harder to see coverage on such bikes due to the long-running Champ Road magazine suspending publication in September of 2016. Hopefully they will re-launch this year to mark their 30th anniversary. 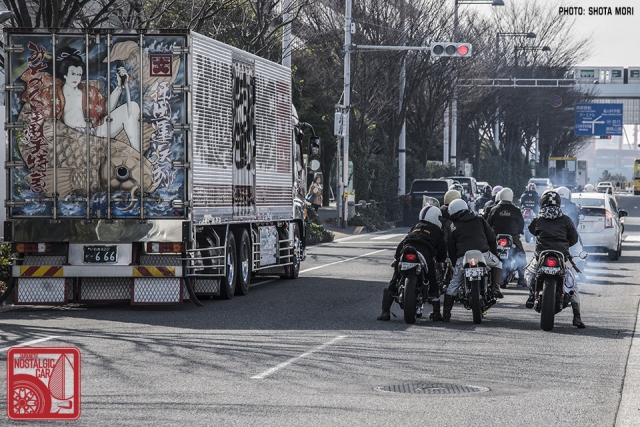 If it doesn’t, that only means such meets are increasingly important for keeping the subculture alive. The passion is still there while dialing down the outlaw connotations, and it has gone hand-in-hand with recognizing and appreciating classic motorbikes. Hopefully, we will see shows like the New Year Meeting relax to open the show grounds to bikes and their owner’s pursuits of the wild side.