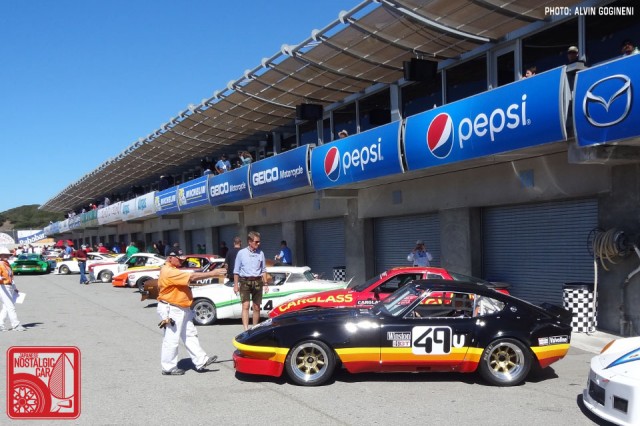 Today’s guest writer is Alvin Gogineni, a member of the Z Car Garage team that restored and worked as pit crew for Joel Anderson’s No. 49 IMSA Datsun 240Z at the Rolex Motorsports Reunion. —Ben

If it’s the smell of 110 octane, straight-piped exhausts and vintage wheel-to-wheel action you desire than look no further than the Rolex Motorsports Reunion, one of the keystone events of the week-long Monterey Historics. This is what it’s like to bring vintage Datsun 240Z to this the world-renowned event and run it. 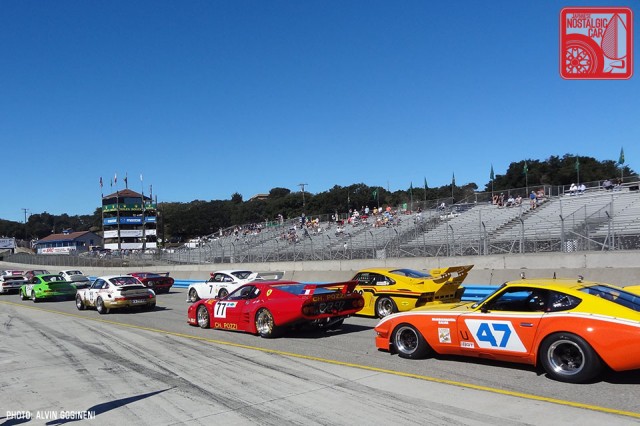 The setting for the Rolex Motorsports Reunion is Mazda Raceway Laguna Seca, probably the most famous road circuit in the US. In the past, this vintage race event has only allowed historic race cars that have raced in a sanctioned series before. Z Car Garage was thrilled to help Joel Anderson, the original owner, builder and driver of the No. 49 IMSA Datsun 240Z, bring his car back to life after being stored for 25 years. 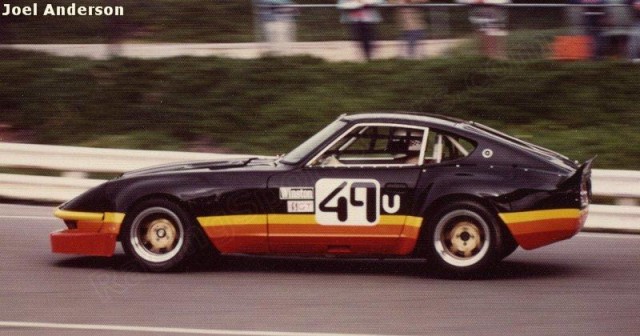 The rules have gotten a bit more relaxed over the years but we’re proud to say we restored Anderson’s Z to late-70s spec as it was raced (the above is a photo of the car in 1980). Here’s a brief history from Joel Anderson himself, an excerpt from an interview I conducted with him on Z Car Blog.

The car was originally presented by Mr. Katayama to Mr. John Cooper, President of Ontario Motor Speedway in 1972 to be used as the Official Pace Car for the third annual California 500, held on Sept. 3, 1972 (it still has the built-in flag holder). The car was later given to the Bob Bondurant Driving School at Sears Point. In 1977 I purchased the car from Datsun Competition for one dollar.

I ran the car at all the west coast IMSA races in GTU for three years. Starting in 1980 I ran the car in SCCA Super Production setting the track record at Sears Point and Laguna Seca and winning The Pacific Road Race Championship as well in S/P. I sold the car in 1982 as a GT2 car, with smaller flares and wheels.

Years later, Anderson bought it back but it had been in a storage shed for 15 years or more.

Present day vintage racing expects both performance and concours condition, in the same car. It is a much different process to restore a forty year old car that will be used at high speed under constant stress and strain than it is to spruce up an old Packard for boulevard cruises.

The Z does not have new “trick” parts. Original parts from Joel’s collection were re-used and common wear items were refreshed.We kept little details like original suspension parts and period-spec braking components in tact, but using modern tires and safety equipment as required by the racing bodies. 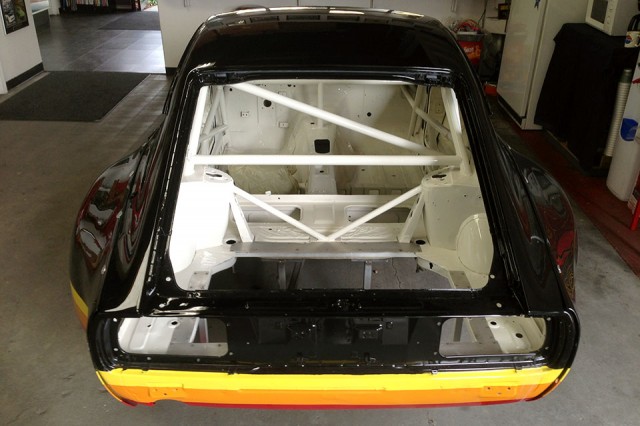 One of the best parts of any IMSA car and especially the Z’s are the enormous fender flares. Lucky for us most of the bodywork was present or sourced easily. For paint, we turned to William’s Auto Body, who did an incredible job of laying the black paint with bespoke striping. Single-stage paint was chosen of course to give it that 70′s vibe, and William also shot the interior in gloss white. 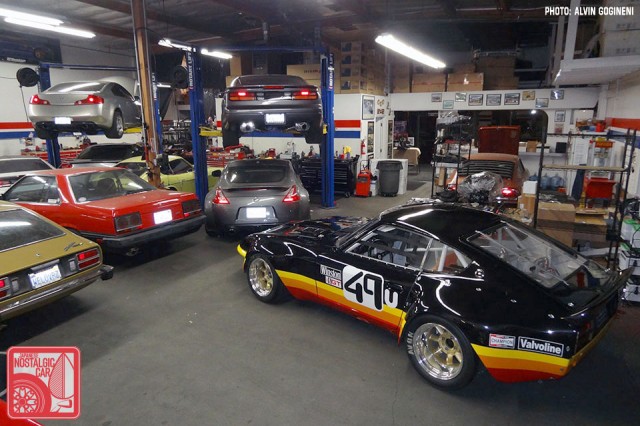 The interior also has the original race seat and Momo Prototipo steering wheel. With all of the vitals checked, we towed it to Laguna Seca on the original trailer Joel used decades ago at Road Atlanta.

We arrived at Mazda Raceway Laguna Seca early Friday morning for practice sessions. The track enshrouded in fog was surreal. Despite the moisture, a few brave souls were on course for their practice laps. 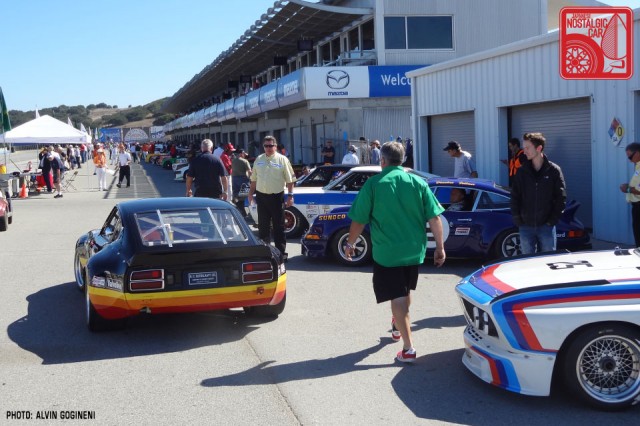 Despite the margaritas and friendly banter amongst spectators and fellow drivers in the paddock, it’s all seriousness once your racing group is called to the hot pits. Joel’s group is 5A: 1973-1983 FIA, IMSA GT and GTU cars. And what a group to be running in! Dream cars abound, like Porsche 935s, Ferrari 512BBs, Randy Pobst in the BMW M1, the Dekon Monza and high-profile Nissans such as the IMSA 240sx and Adam Carolla’s Bob Sharp Racing Z31.

Both practice and qualifying sessions were completed and the Z ran flawlessly. Joel needed a few laps to become friends with the direct-drive, dog-leg pattern transmission. Eventually he nailed it with lap times dropping from the 1:50 range to 1:48. The Z needed nothing but tire pressure and fluid level checks. 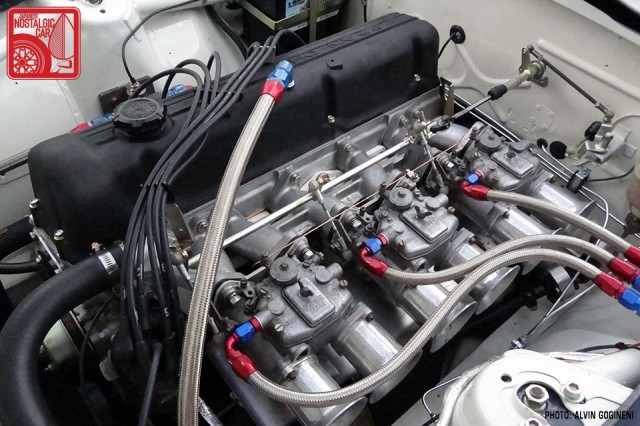 Watching a race car that you restored out on the track is amazing. Topping that off, the driver that originally built the car is at the helm, some 35 years later. Laguna Seca’s track layout has changed since Joel and #49 were here in 1979, but the car looks pretty similar if you ask us.

We love the sound of the Rebello built L-series with triple 44 carbs making sweet music through an un-muffled exhaust. It lives above 4000 rpm and climbs to 8500rpm where it absolutely screams. We saw 110mph under the bridge on the front straight. Healthy! 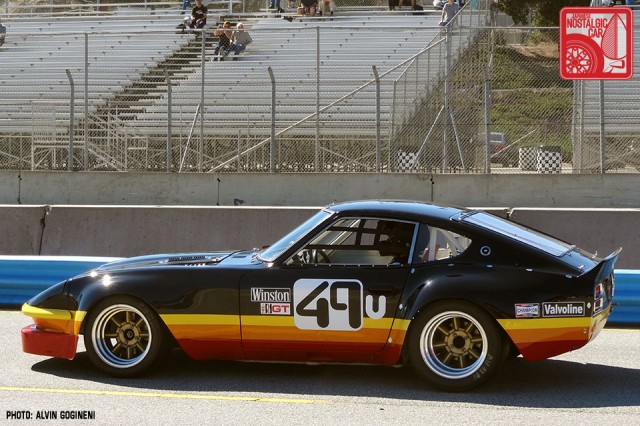 Despite the competitiveness we finished the race without incident, actually placing mid-pack and on par with fellow 240Zs. Congratulations, Joel! Any doubts about these drivers just parading their 6-figure cars out there is put to rest when you witness the anger — bumper scrapes, spins and spectacular last-second passes. A Camaro and AMX spun out in spectacular fashion. For more, check out details, photos, and in-car footage of the actual race from the cockpit at Z Car Blog.

For more coverage of the Monterey Historics, see Part 01 — Bringing a Skyline GT-R to the NISMO display, Part 02 — The Auctions, Part 03 — Rolex Motorsports Reunion, and the Toyota FT-1 Graphite debut.