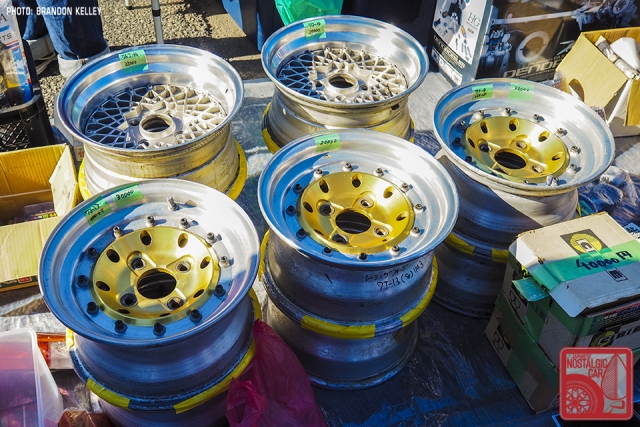 With the final New Year Meeting having come and gone, one of the things we’ll miss most is the swap meet that takes place during the show. For many, it was where you could find rare parts, collectible items, or out-of-print literature. Sure, it was hit or miss, with slim pickings some years and great ones the next, and it was stuff you could probably find by scouring specialty shops or auction sites, but on the last weekend in January, it was all in one place, provided you could fit it in your luggage. 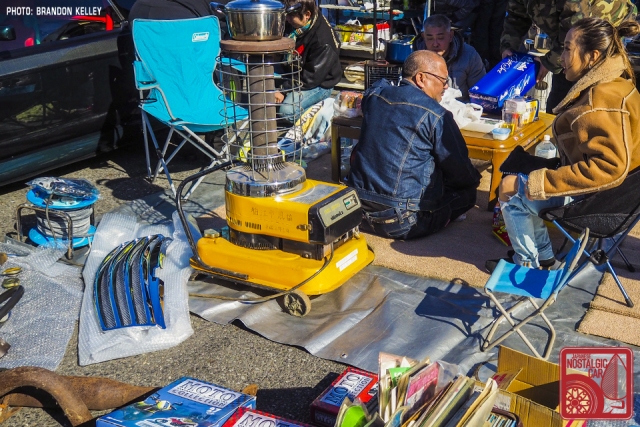 On good years, one could easily spend the entire day of the show browsing the various mats laid down by sellers and not see any cars at all. The items weren’t necessarily ordered in any logical way, so you had to often comb through boxes and crates in the hopes you might strike gold. 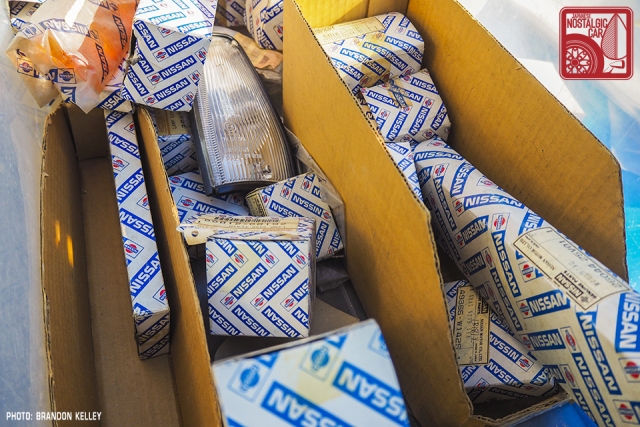 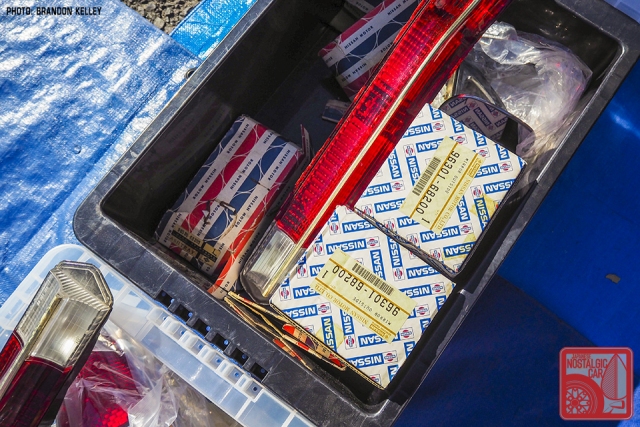 There could be heaps of new-old-stock parts, like, say, a fender mirror for your PA30 Nissan Gloria still in its original box. You just have to have a list of items that you need (part numbers and chassis codes help). 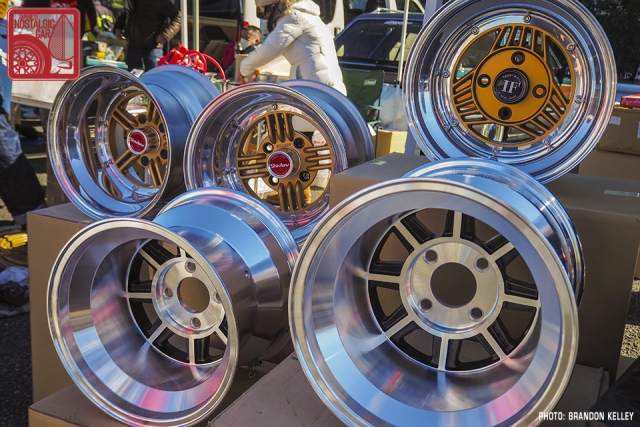 Wheels were a little easier to spot. SSR meshies were pretty common, Racing Forgs (lead photo) somewhat rare, but once in a while you would find unobtainium like 5-spoke Shadows. 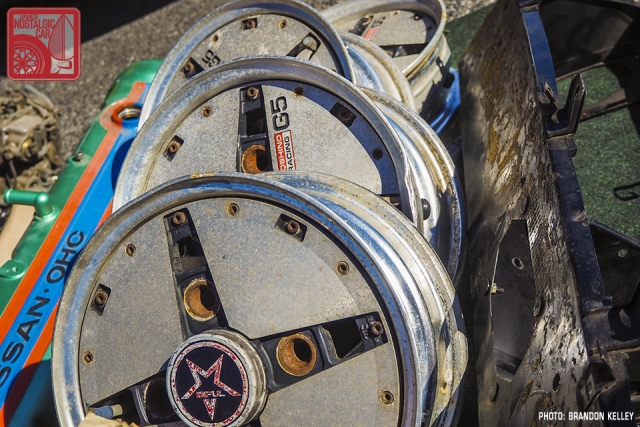 If you didn’t mind putting in a little elbow grease, well-used parts ready for restoration like as set of shallow-lip wheels were fairly easy to come by, such as these Hoshino G5s. Or, maybe you just happened to need a green, orange and blue valve cover for your L-series. 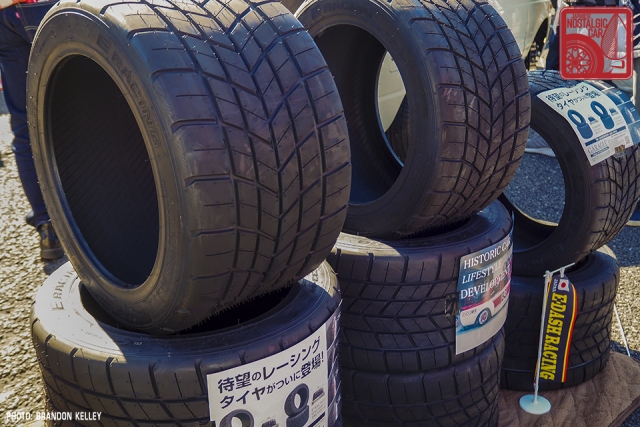 To show just how far the classic car hobby has come since we first attended the New Year Meeting in 2007, there were no kyusha-specific tires being made. These days, there are several companies making them, like these racing tires from Garage E. 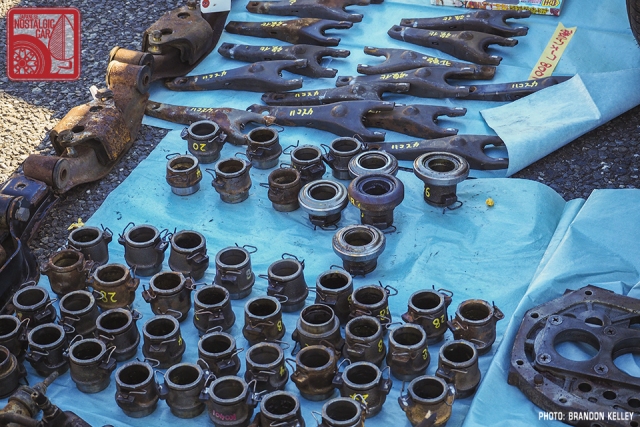 For more popular models, the shopping was a bit easier. Need a throwout bearing or clutch fork for your Hakosuka Skyline? There might be plenty to pick from. 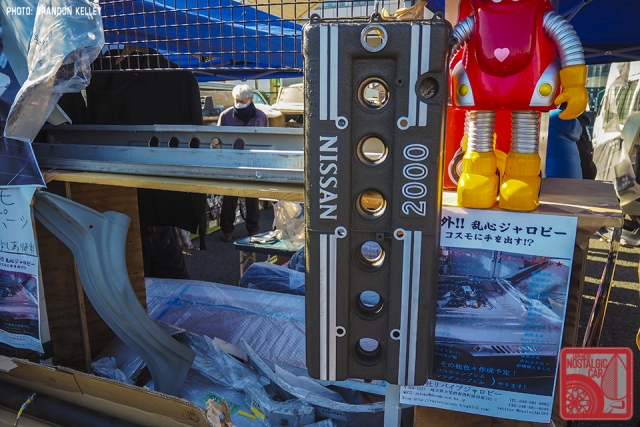 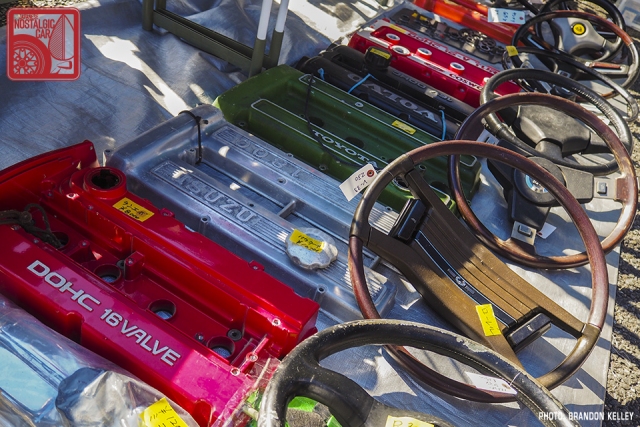 Ironically, despite their scarcity an S20 engine valve cover isn’t that hard to come by. Just be prepared to pay the price. Other items were a bit rarer, but you could get lucky in your search for an Isuzu 117 valve cover or Nissan Laurel steering wheel 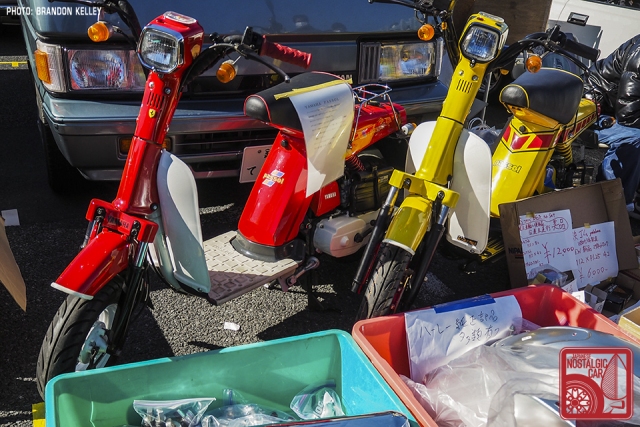 All manner of motorized conveyances were on tap, not just cars. Complete bikes were also a popular item. You could score an entire Yamaha Passol scooter or two. 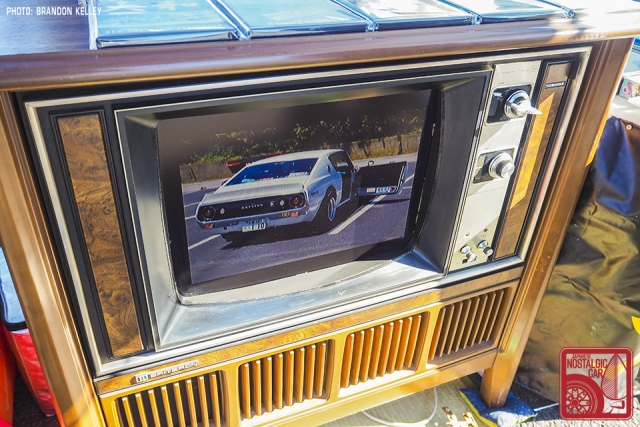 Of course, with a focus on the Showa Era, it was also common to find other household goods. Analog terrestrial broadcasts ended in 2012, but a Toshiba Briteron CRT might still be a cool piece to have in your garage. There’s even a photo of a Kenmeri Skyline pre-“taped” on the screen. 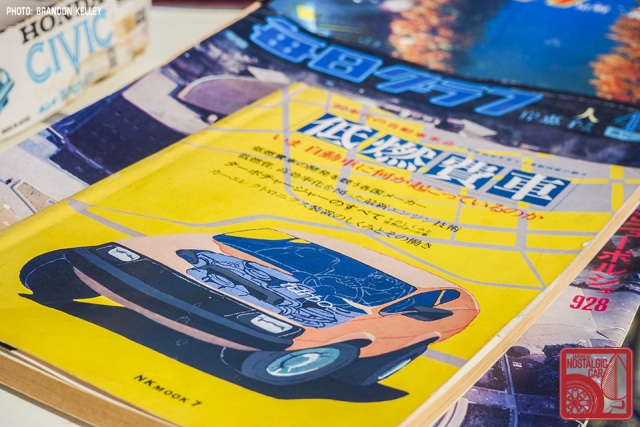 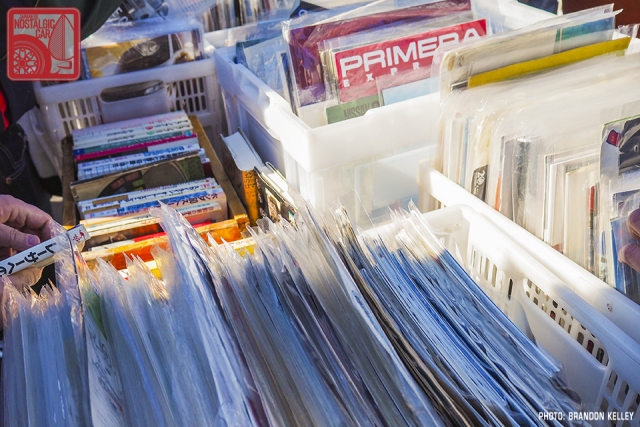 Beyond hardware or machinery, the New Year Meeting was also a great place to find old reading material (or, for us gaijin, perhaps material in which to look at pictures) such as old magazines and brochures. 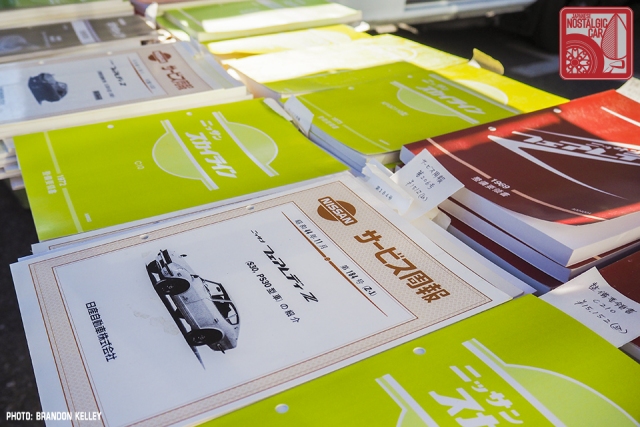 Reprinted service manuals could be had as well, though again those pertaining to the most popular models, such as Skylines and Fairlady Zs, were easier to come by. 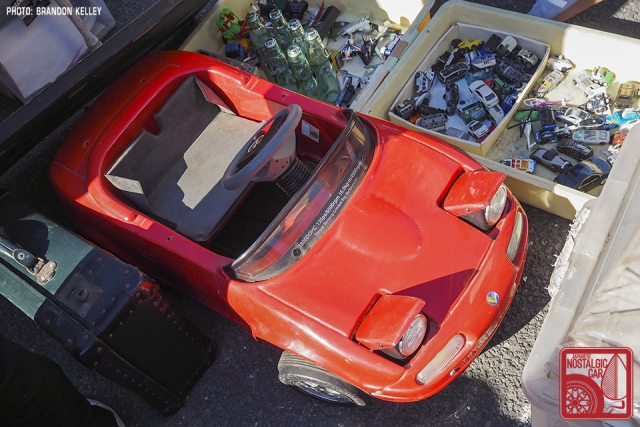 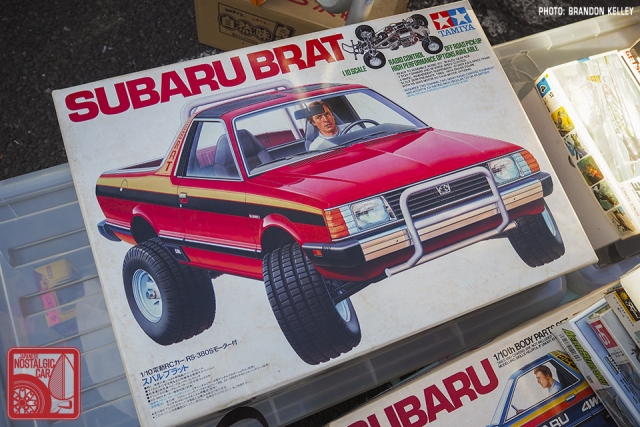 Where there are fans of real cars, there are also fans of model cars, and the New Year Meeting was a great place to shop for them, especially older ones. The selection ranged in size from Tomicas to vintage radio control cars like a Tamiya Subaru BRAT to a Miata pedal car. 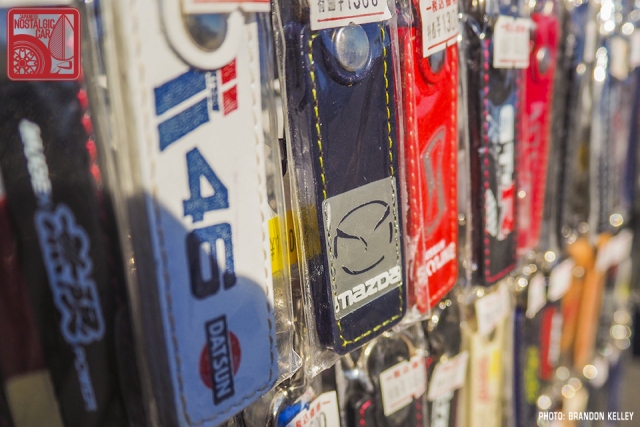 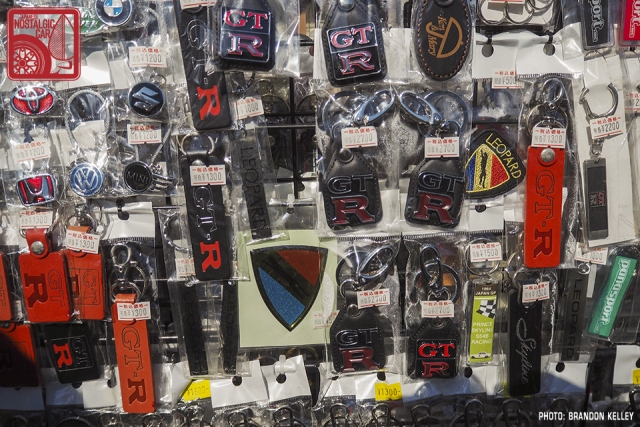 All manner of car-related accessory were there for the picking. Key chains of varying quality representing every make and model would make terrific souvenirs. 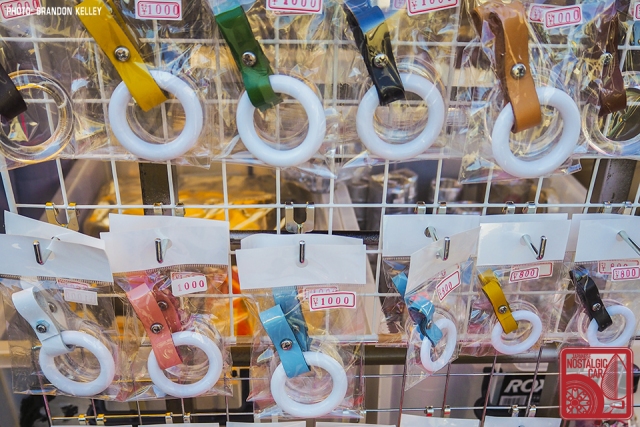 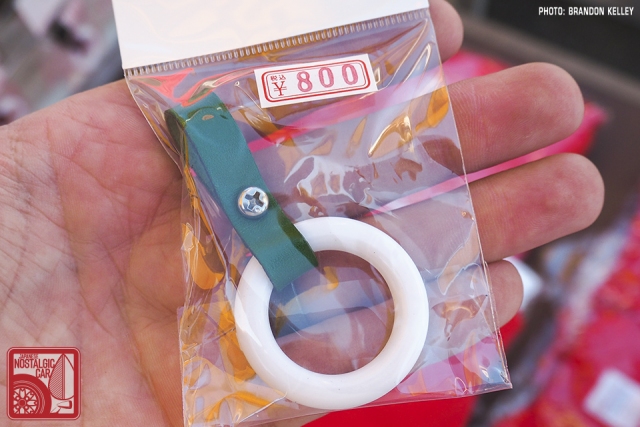 One shop had an assortment of tsurikawa in various colors. Some, however, were deceptively sized. 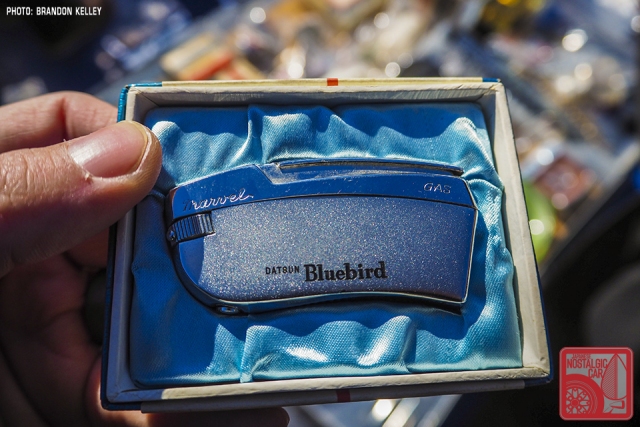 Our favorite finds were things that we didn’t know existed and that send us down a rabbit hole of research. Take this Datsun Bluebird cigarette lighter, for example. The company, Tsubota Pearl of Tokyo, made beautifully crafted Marvel-branded lighters (early ones using oil, this later one using butane gas as indicated on the corner) as promotional items back in the day. There were a few with different Datsun and Nissan logos, perhaps available at Nissan dealers. The company still exists, and still makes lighters, albeit lacking the Datsun printing, that look largely unchanged to this day.

Sadly, unlike the lighter, the New Year Meeting is no more. There are other swap meets in Japan to carry on the tradition of turning one man’s junk into another man’s treasure, but with its scale and its proximity to Tokyo and the New Year Meeting’s was one of the most accessible. It will be missed.