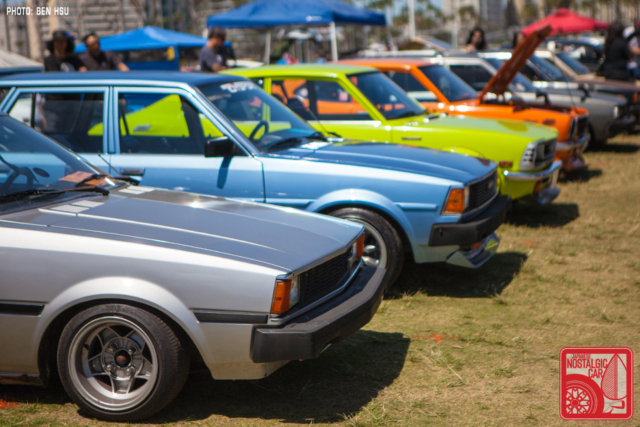 Toyota still makes large sedans, economical cars with transversely mounted engines, and powerful sports cars (at least in V8 form), but the once plentiful species of lightweight, rear-wheel-drive compact has dwindled to just one model. Toyotafest might be the last place in the country where you can see a decent gathering of RWD Aichi steel that isn’t wearing a Lexus badge. 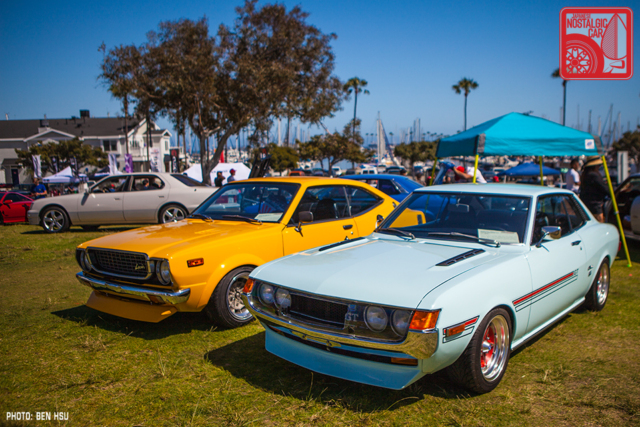 While this year’s show lacked new game-changing builds we’ve seen in this category in years past, we did see many familiar faces that we never tire of. Kirk Hubbard and his son brought a pair of C-Era cars, an A20 Celica and E30 Corolla that personify the golden age of Toyota coupes. With an 18R-G and 2T-G under their respective hoods, both have been modified to period spec with a proper mix of Japanese and American market influences. 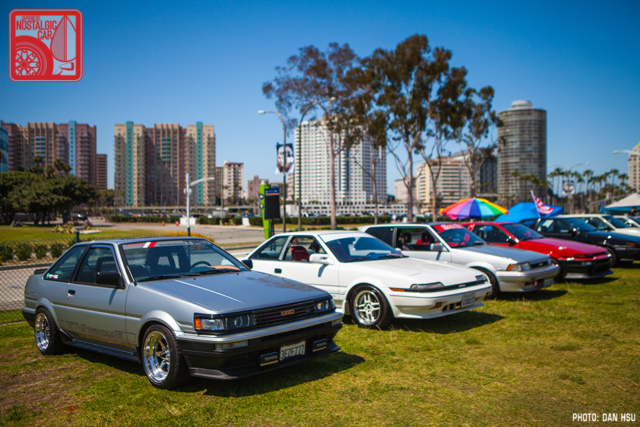 Of course, when most people think of RWD Toyotas the AE86 is top of mind. Back in the nascent days of drifting, the prevailing thought was the more JDM pieces you could throw on the car the better. Nowadays, examples like Kit Fung’s Levin coupe conversion provide the motherland vibe but keep the rest of the car clean. Even US-market “GT-S Twin-Cam 16” decals remain. For his efforts, Kit earned an award in the AE86 class for outstanding workmanship. 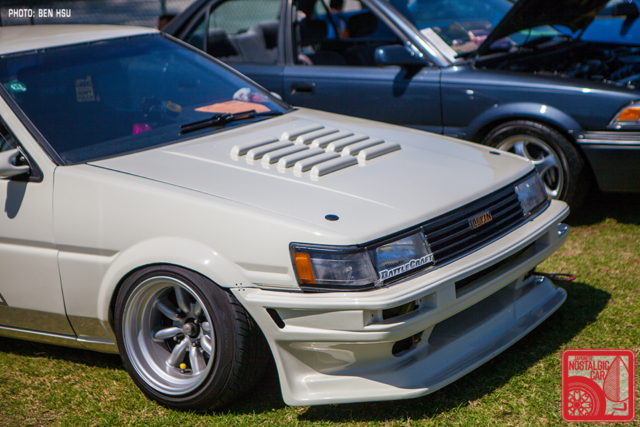 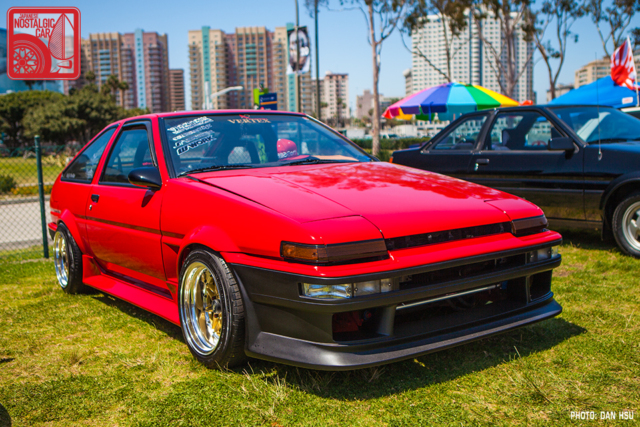 Meanwhile, many other Hachiroku exemplify the drift era look, with wild aero kits and aggressive wheel fitment. Ryan Ibarra’s genuine Vertex-kitted liftback wore a slew of parts from the Hyper Rev parts catalog of the 90s and early 2000s. There’s coilovers by GReddy, an exhaust by RS-R, Work Equip 03 wheels by Work, and a smorgasbord of suspension and chassis components by Cusco. Ryan took home an award for outstanding workmanship in the AE86 category. 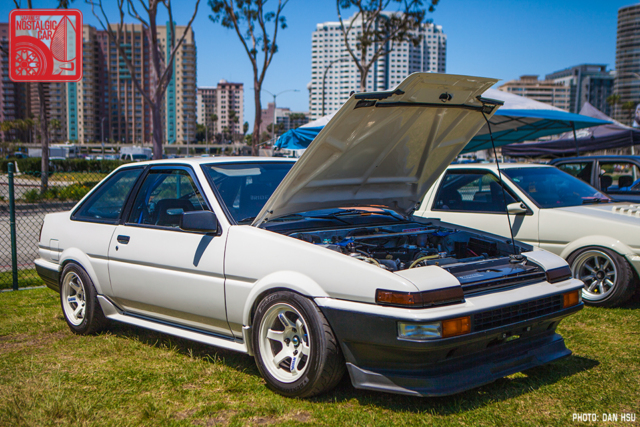 If Ryan’s AE86 is ready to drift, Feras Faraj’s 1985 coupe looks like it came straight from the touge. With TE37s wrapped in sporty Dunlop Direzzas and simple white paint, it’s not difficult to imagine the coupe blasting through a forested hillside. 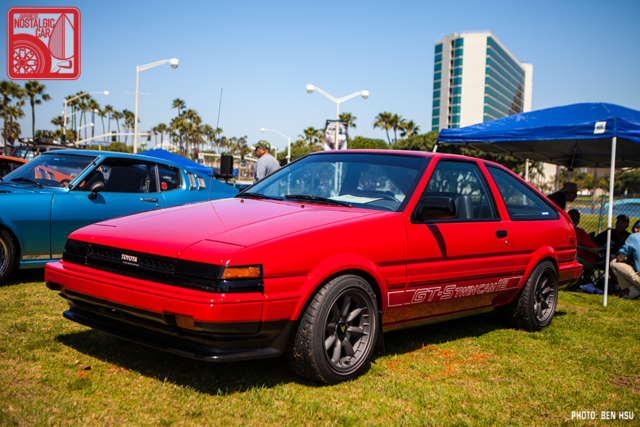 Popular at the time, JDM conversions dwindled what was already a scarce resource: US-spec Corolla GT-S models. Very few unmolested examples remain, which is why Janet Fujimoto and Duane Tomono’s ground-up restoration of a zenki AE86 hatch is a one-of-a-kind build, not to mention one of our consistent Toyotafest favorites. 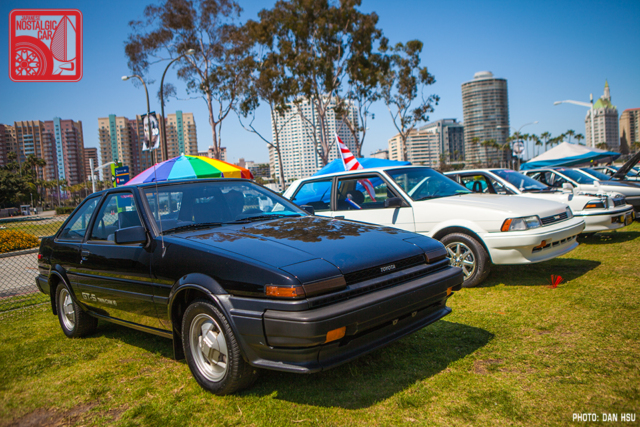 Brian Marinas’ kouki Coupe, on the other hand, is a survivor. Despite having close to 200,000 miles on the odometer, it still looks great and wears its original paint. We featured it as a Kidney Car back in March, and are happy to see that it has found a good home. 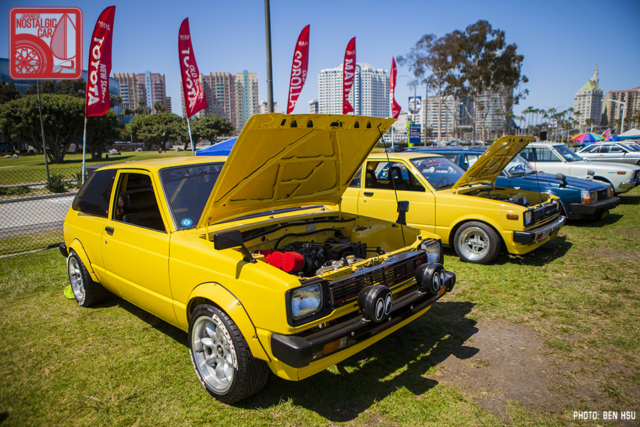 There were only three Starlets present at this year’s Toyotafest, and two of them were finished in 541 Yellow. Stephen Salazar’s featured bolt-on overfenders, driving lights, and a 20-valve 4A-GE under the hood for an overall rally-ready look. 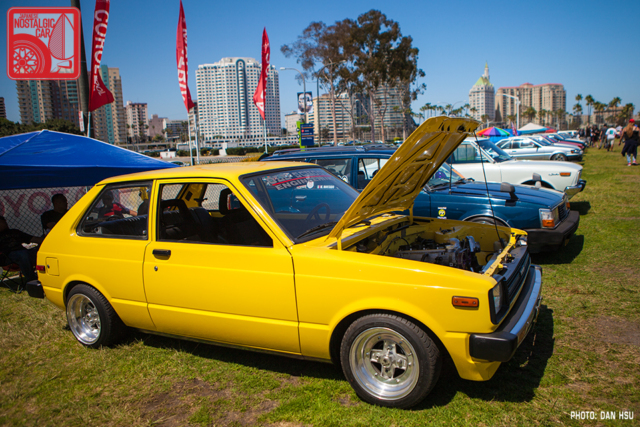 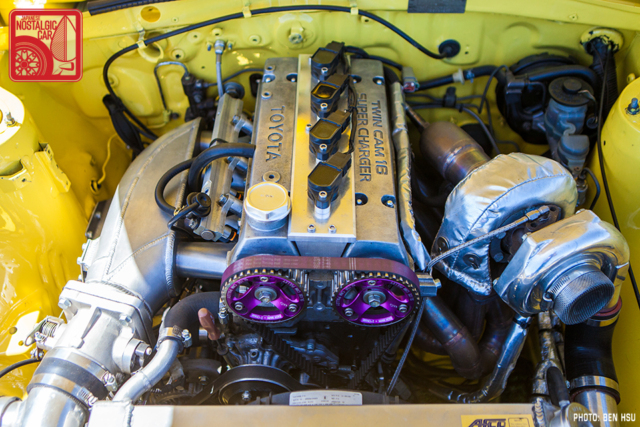 Archie Giron’s exemplified street style with SSR MkIIs, a coilover suspension and a built turbocharged 4A-GE based off of the 4A-GZE from a supercharged AW11 MR2. Archie took home one of three awards in the Best Old School category. 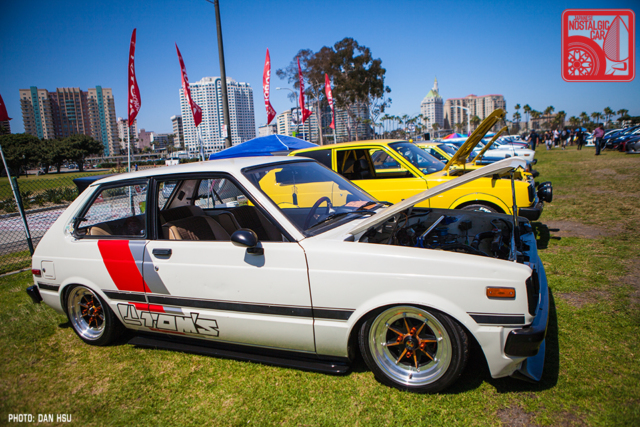 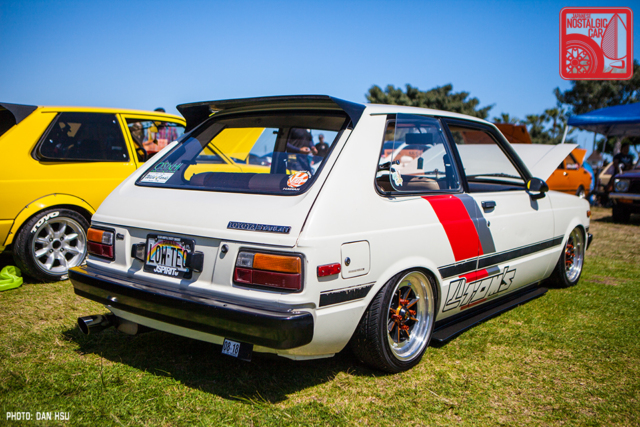 The third Starlet hailed all the way from Hawaii. Tommy Dolormente’s bagged KP61 is well-known on the internet, and was even the subject of a video we posted in April 2017. Since then he’s swapped the painted A60 Supra wheels for some SSR Casablancas, but the other aspects of the car have stayed charmingly stock, like the white paint and original 4K-C engine. For his efforts, Tommy also took home a prize in the Best Old School category. 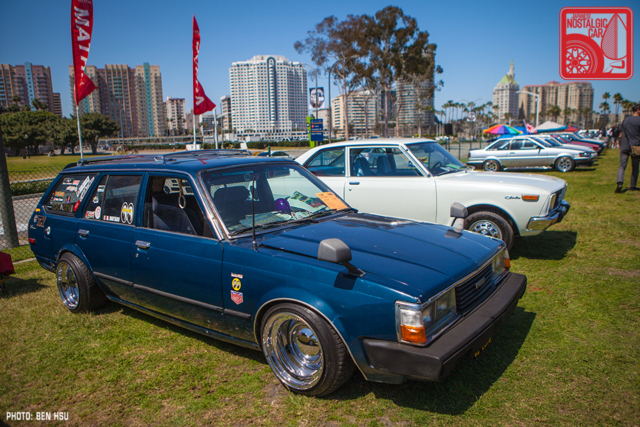 The lone Corona at the Show belonged to Mark Hurtado. Though its 22R-E engine came with fuel injection, Mark has converted it to carburetion with a Weber 38/38 Outlaw. The rare 1981 Wagon serves as his daily driver and Hot Wheels hunter.

Another example of a single-model representative was the 1972 Carina of David Acero. It was purchased from the original owner still wearing its factory paint and pinstriping on the trunk. Though the vinyl seats had suffered 40 years of baking in the California sun and had to be reupholstered, David went through the trouble of keeping the original Carina stitching on the seat backs. Thanks to his work in preservation, David took home the final award in Best Old School category. 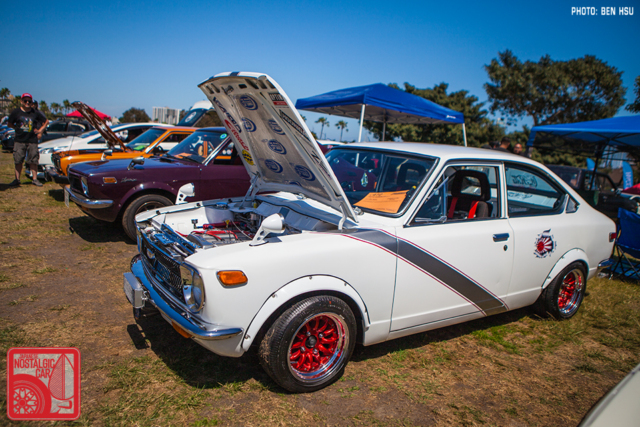 Though not a single-model car, Florentino Bautista’s 1970 Corolla was the sole delegate from the first-gen Corolla camp. The fastback KE17 Sprinter Coupe is an extremely rare model, one of the first sporty compact Toyotas sold in the US. This particular example has a built 2T-G twin-cam mated to a close-ration T50 transmission and lightweight flywheel. 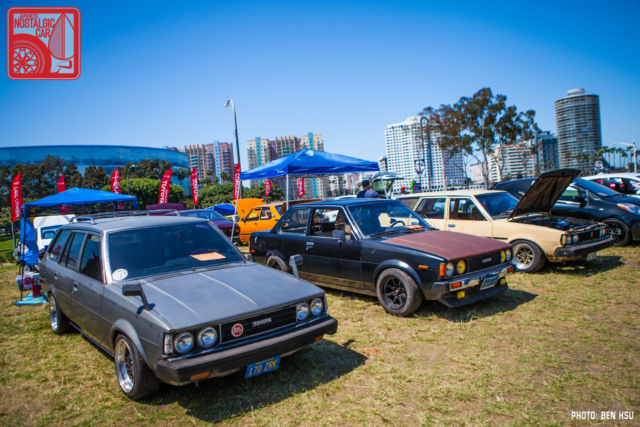 Surprisingly, there weren’t a lot of E70 Corollas at this year’s Toyotafest. Ozzy Guillen’s gray 1979 Wagon is still powered by the original 3T-C and is affectionately nicknamed Donna Summer. Jesse Gonzalez’s black 1982 2-door also runs a 3T-C under the rusted hood, perhaps an homage to the Motorfix drift team? Last in the row is George Alvarez’s tan 1981 wagon, which despite its patina housed a black top Beams engine from an Altezza this thing must be fast!).

Credit must also be given to Justin Neumeyer, whose silver, 4A-GE-powered 1981 hardtop coupe in the lead photo was driven 1,300 miles from Canada. 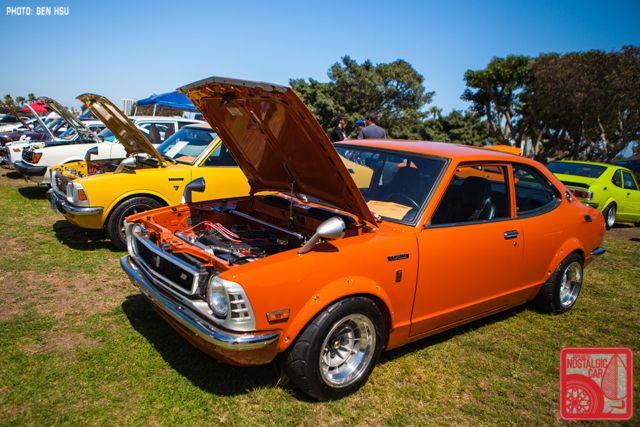 The one model that had a tremendous turnout was the TE27, which is unexpected because you never see them on the street. What’s more, all of them were well done, so it was no surprise that all three awards in the Best Old School Corolla category went to mangos. The first medalist was Orly Tapay’s orange 1974 had the requisite 2T-G twin-cam, nicely lowered on TOSCO wheels.

Beside it, Tu Tran’s yellow 1971 was running a 3T-C with a ported and polished 2T-C head, Wiseco 90mm high-compression pistons, TRD H-beam conrods, and an Isky 260-degree camshaft. 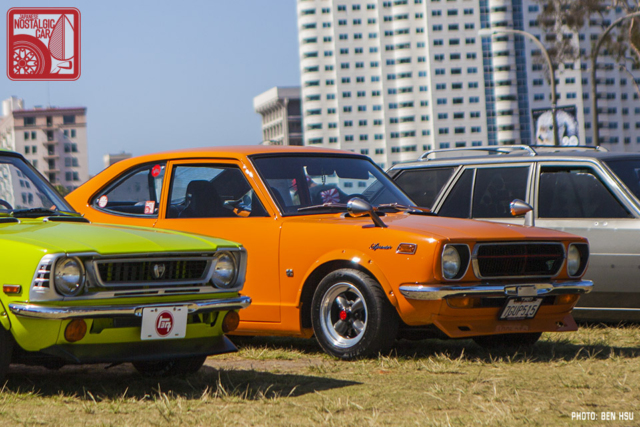 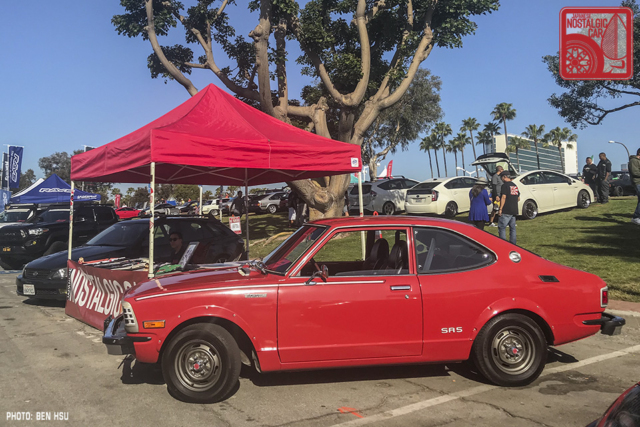 Russ Capulong brought two TE27s, one a converted Sprinter Trueno wearing Watanabe 4-spokes, and the other a bone-stock red US-spec SR-5 on its rare factory steelies. The former won on of three awards for outstanding workmanship in the Old School Corolla category. The latter was a pinch hitter at the JNC booth (and thus not eligible for an award), after our scheduled FJ60 Land Cruiser suffered a mishap the Friday afternoon before the show (thank you, Russ for staying up late into the night prepping your car for us!). 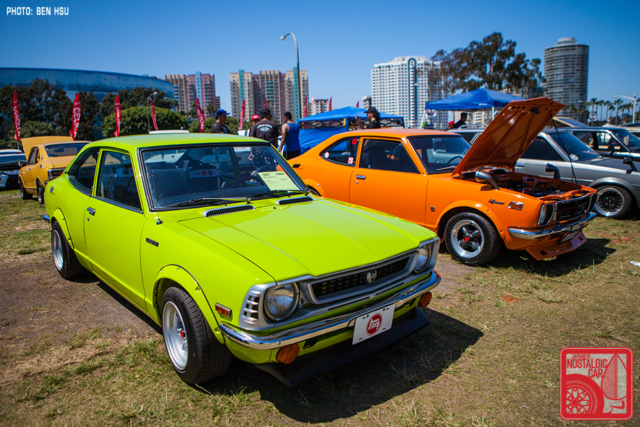 Since this year Toyota was celebrating the launch of the new Corolla hatch, company representatives chose one Corolla to award their grand prize, a trophy built out of old Corolla parts. That honor went to Dennis Aquino’s newly built lime green TE27 on silver Watanabes. Congrats, Dennis!

We’ll have more 2018 Toyotafest coverage coming up, but in case you missed it, check out Toyotafest 2018, Part 01 — Sedans, Part 02 — Supras, Part 03 — Transversely Mounted, and Part 04 — RWD Celicas, as well as a spotlight on Randy Beard’s Toyota Mark II kaido racer.