EVENTS: 2019 All-Toyotafest, Part 03 — Classics that Started It All 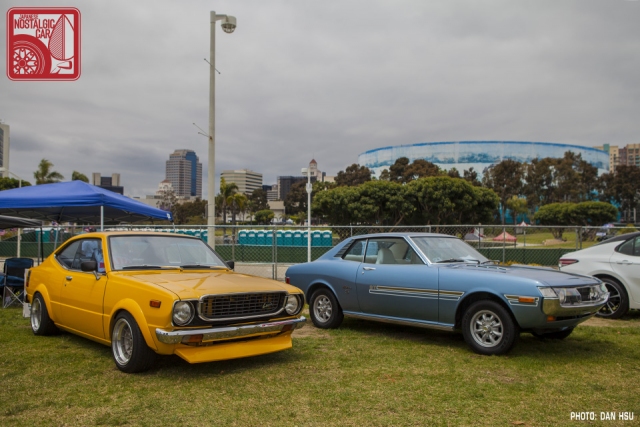 It’s hard to believe, but this year’s Toyotafest was the 24th of annual shows held by the Toyota Owners and Restorers Club. It’s been almost a quarter century since the first one took place, and at that first one all the Supra Turbos, MR2s, and Lexuses that populate the field today were still brand new. The heart of Toyotafest has always been the cars of the Showa Era. 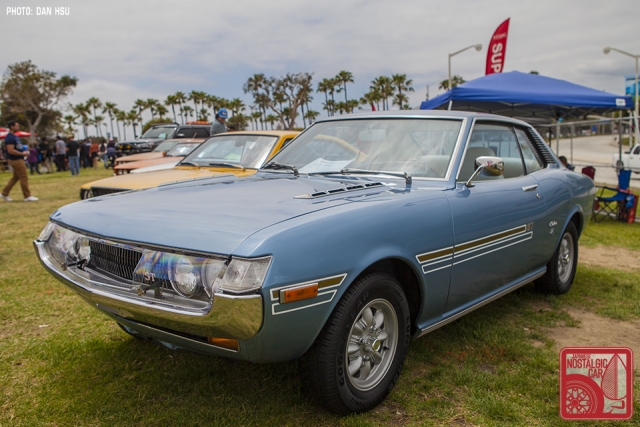 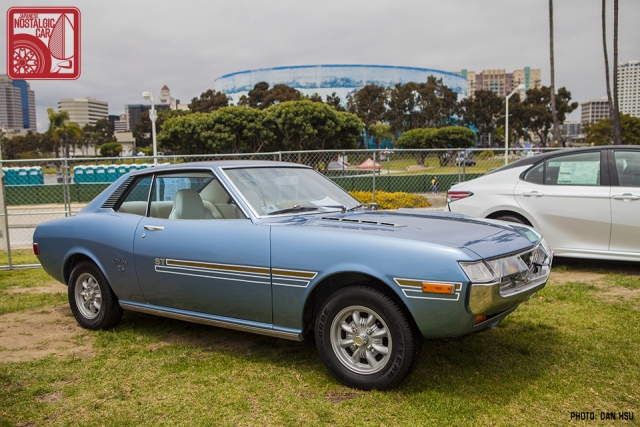 The show started out as a small gathering of TORC members and their friends. Joji Luz is among the club’s long-serving list of presidents, and owner of this impeccable Daruma Celica. Not only is it a fine example of Japan’s original personal coupe, it’s serial number 13, one of the lowest numbered Celicas in existence. 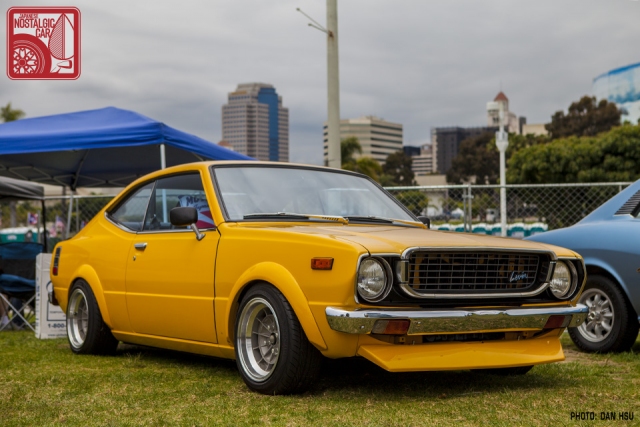 Another long-time TORC officer, Kirk Hubbard, owned a yellow TE37 Corolla back when they weren’t special or rare. Having regretted parting with his many years ago, he got another. Unfortunately, finding one in good condition today is near impossible. Still, he was able to build it exactly like he would have wanted back then. 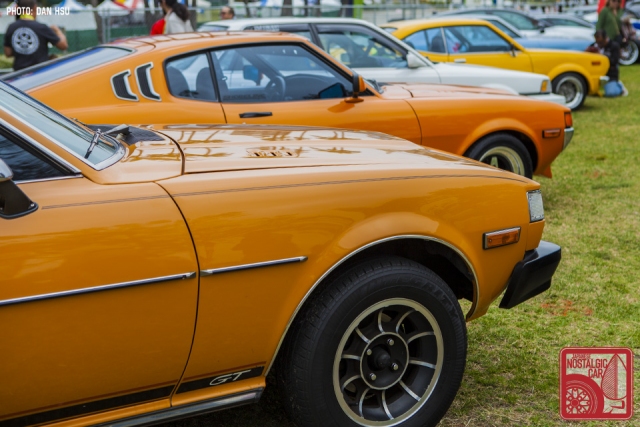 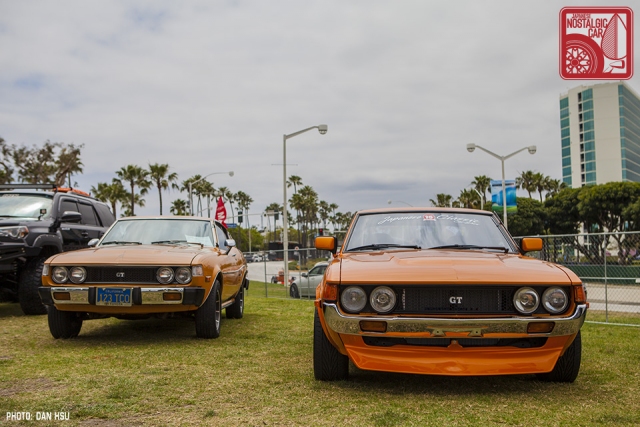 Veteran TORC-sters Mike Malinick and Brian Karasawa’s orange Celica Liftbacks are like Toyotafest royalty. Near stock and heavily modified in period nisei style, the “twins” provide an excellent view of the wide-ranging styles that have come to populate the show. 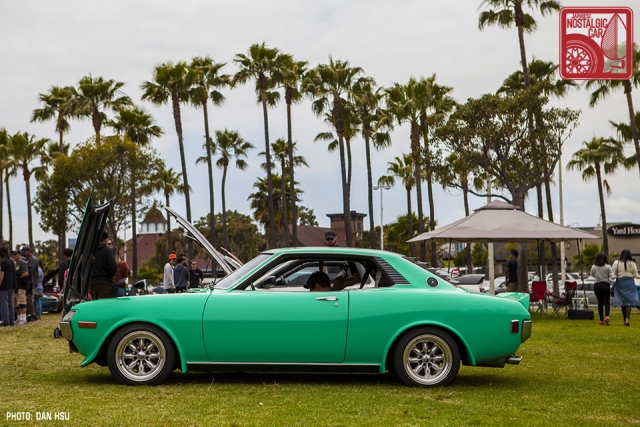 It’s amazing to see how much the event has grown. It’s still welcoming newcomers every year, too, like this mint green Celica with molded fender flares that made its Toyotafest debut this year. 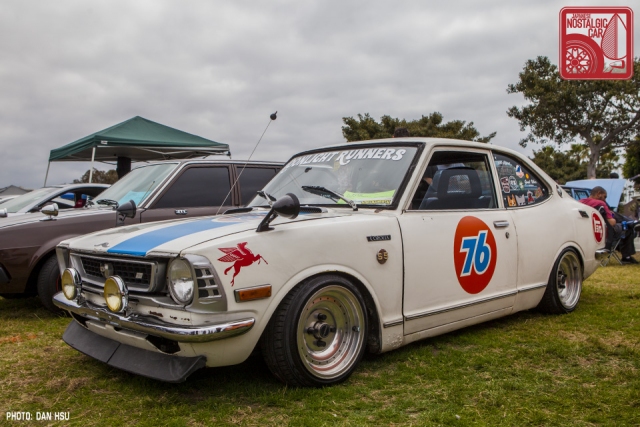 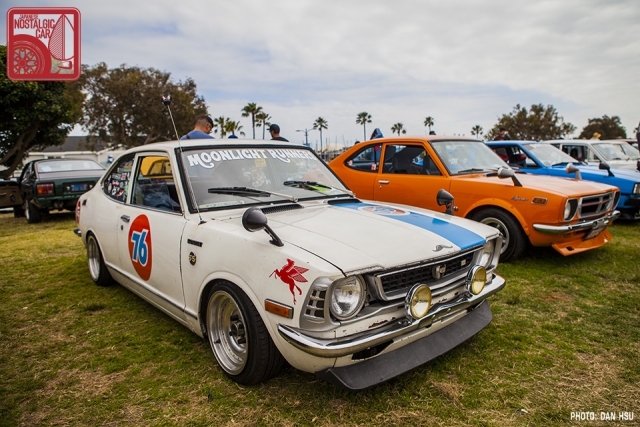 Another newcomer this year was Justin Bacani’s 1974 TE27. It was done up in a nice vintage racer theme, with several petroleum company logos over a patina’ed body.  and some rare Advan spoke-less wheels. It was also good to see a US-spec mango running its original 2T-C, an underrated engine. 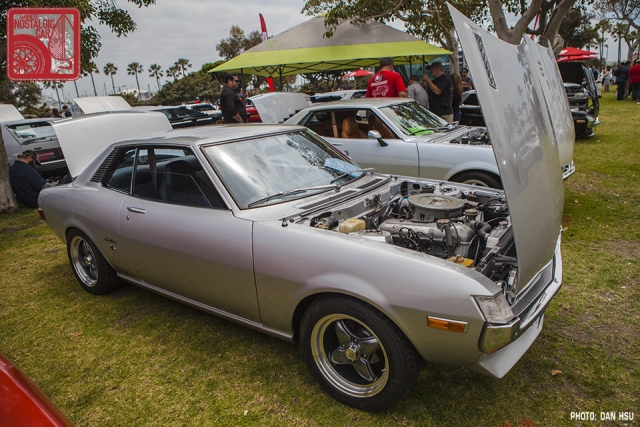 Ryan Panlilio’s 1974 Celica is a prime example of a rescue car. Like many Japanese cars in California it saw scarce usage, a claimed 67,000 original miles, but suffered a lack of garaging. An otherwise solid runner, its original paint, vinyl roof, and vinyl dash and seat skins had to be redone. Now it’s been given a second lease on life as a resto-mod. 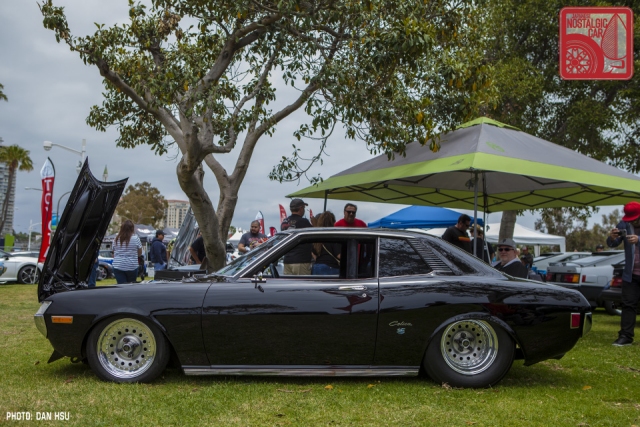 Cary Miller’s street-legal drag Celica is always a magnificent sight to behold. It would have been so easy to insert a V8 of some sort, so we applaud the 1JZ swap and dedication to the brand that exceeds even Toyota’s. For his efforts, Cary won an award in the FR Celica class. (For more on this car, see this Toyotafest spotlight.) 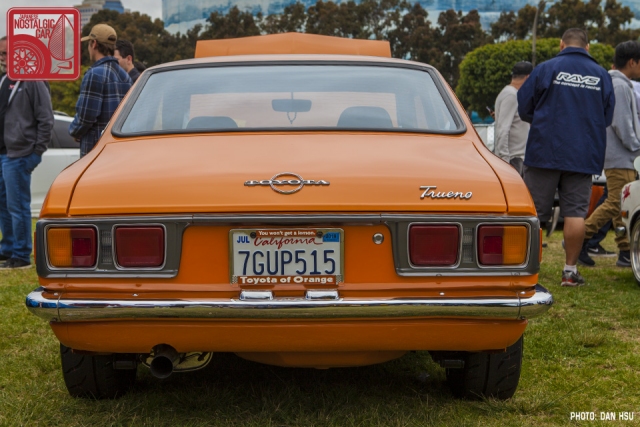 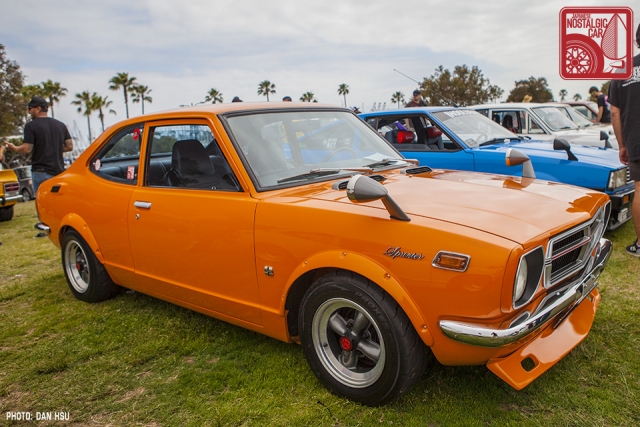 One of our favorite mangos is Russ Capulong’s TE27. The Trueno Sprinter conversion could have come straight out of the pages of Nostalgic Hero and the more obscure 4-spoke RS-Watanabes were an inspired choice. It was no surprise that it went home with an award in the Corolla Classic category.

Among the finest of peanut Corollas was Pholo Gatmaitan’s 1971, another winner in the Corolla Classic class. It seems particularly cool to swap the Levin/Trueno’s 2T-G twin-cam (with Weber 48s and TRD header no less) into the less-loved 2-door sedan platform rather than the typical Sport Coupe. 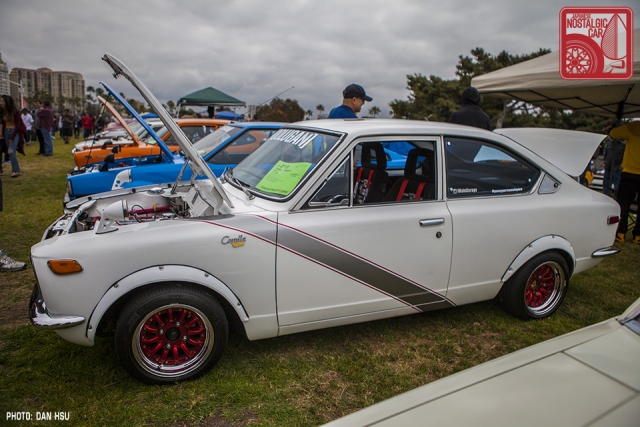 The earliest generation of Corolla was represented by Nathan Bautista’s KE10 Sprinter. Its 2T-G is said to be built with TRD internals for an 11:1 compression ratio. An LSD and KP61 Starlet front suspension modernize the drivetrain a bit as well. Like all the best projects, it was the result of a multi-generational (father-son) project. 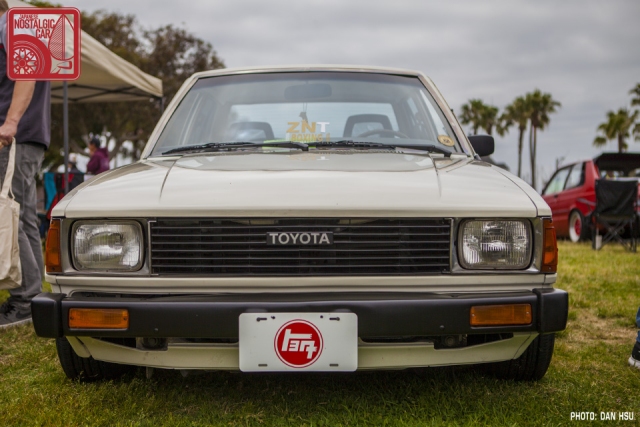 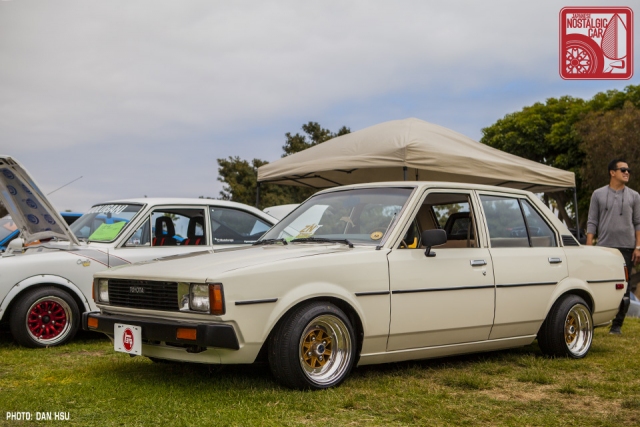 In past Toyotafests E70 Corollas were common, but for some reason this year’s cars like Collins Legarde’s 1981 was one of the few. The very clean kouki sedan on SSR MkIIIs showed off perfectly the platform’s clean lines and no-nonsense simplicity of design. 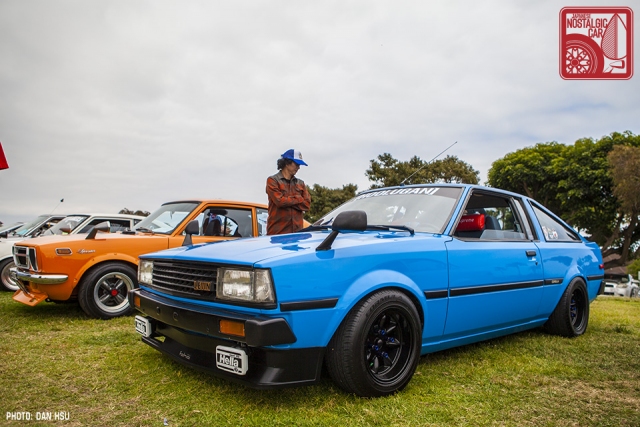 Patrick De Leon’s TE71 Sport Coupe was an excellent resto-mod specimen, rounding out the trio of Corolla Classic award-winners. On the outside, classic design cues like Hella foglamps a Foha front lip  keep the appearance clean. Under the hood, however, a 1.9-liter 2T-G/3T hybrid with 320/304 TRD cams and Weber 45 DCOEs is said to generate 200 horsepower. 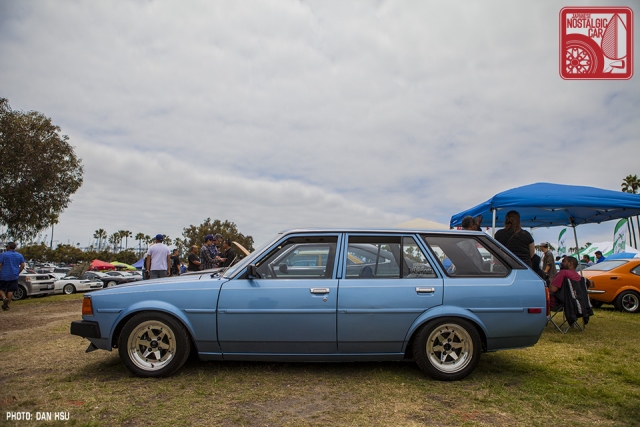 One of our favorites, though, was this simple E70-generation Corolla Wagon. Finished in original Light Blue Metallic and lowered a tad on Longchamp XR-4s, it made for a perfect choice if you could only have one car to serve all your needs. 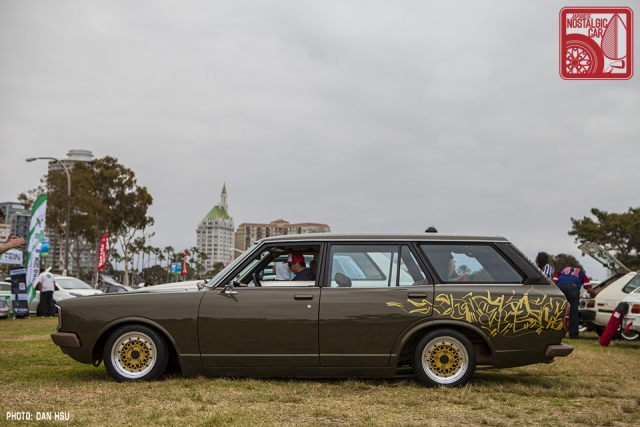 Another newcomer was Timothy Garot’s 1973 Corona Wagon. It was definitely an eye-catcher, not simply by dint of being a wagon, but with its lowering on classic Rays Volk Mesh wheels and metallic brown and gold graphic finish. 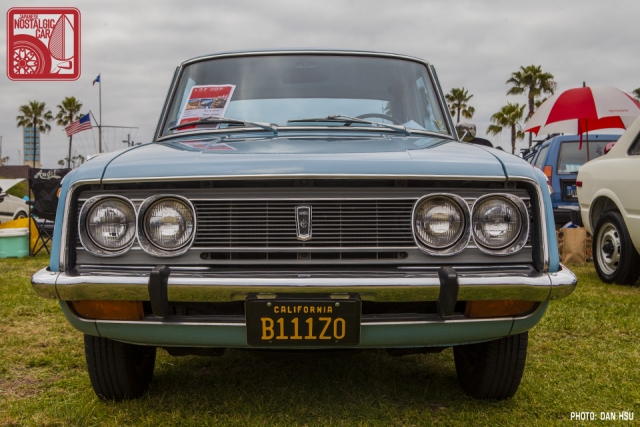 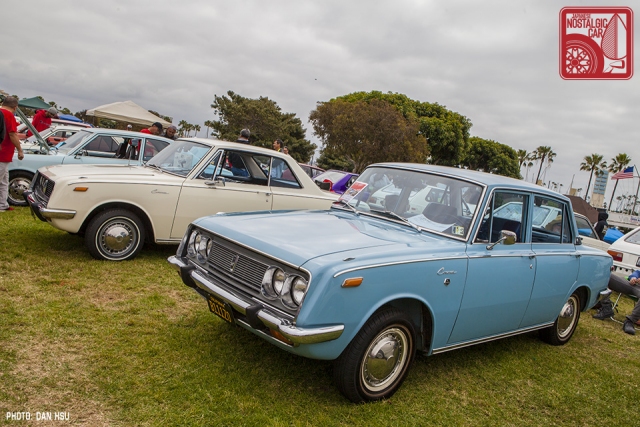 Back when Toyotafest started, barikan Coronas were a common sight. Over the years, they’ve gotten rarer, so it’s nice to see a couple still showing up among all the lifted Tundras and VIP Lexus sedans. Steve Alper’s 1969 sedan was an astounding example of an all-original, unrestored example with just 25,000 original miles — a true gem. 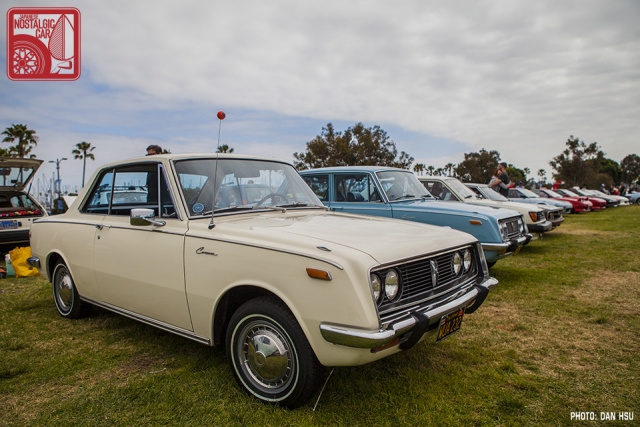 It is perhaps fitting, then, that this year’s Best in Show went to a 1968 Corona Hardtop. The current owner, Patrick Arakawa, is just the second owner of this 51-year-old, black-plate car. It was placed into non-operational status (not subject to smog checks and registration fees) and garaged from 1995-2018. The odometer shows an original 50,000 miles and change, and the interior is said to be all original aside from the dash cover.

It was a beautiful example, and perhaps an indication that the Best in Show awards are, rather than skewing towards the heavily modded cars that could just as easily show up at Hot Import Nights, are returning to the show’s roots.