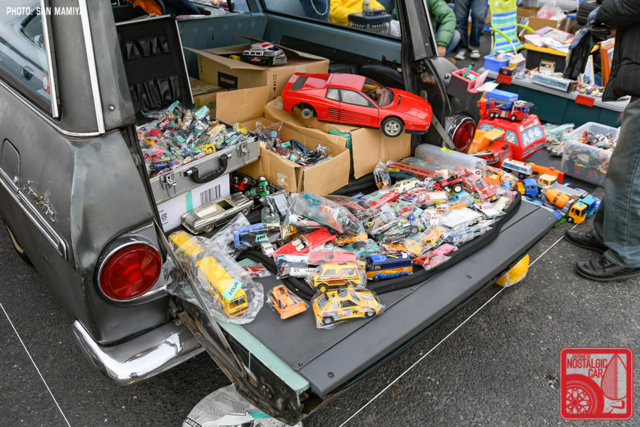 One of the best parts about the largest classic car show in Tokyo is the random stuff you find for sale. We’ve covered the cars and trucks, so let’s take a look at the miscellany to be discovered in various corners of the event. Whether it’s parts, lit, or collectibles, there is no shortage of stuff to feed the otaku-minded. 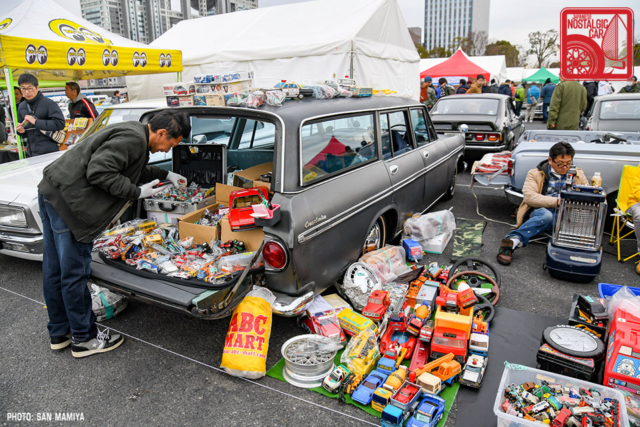 The gray paint on the S50 Crown Wagon looks contemporary, but was actually an original color. All stock except for a good slam, it doubles as a great booth for selling all sorts of odds and ends.

On the mat next to the Crown are some rare friction power toys, like a Nissan fire engine next to the Corona hubcaps. Beside a lone SSR rim is a cartoonish car that has the word “Dancing” written across the windshield, along with tires deformed like they are actually dancing in a Tex Avery cartoon.

In the trunk are Dandy models, a Pocher Ferrari Testarossa that was quite expensive back in the day, and an fancy metal tool case filled with black box Tomica. As is customary in Japan, the wares are being handled with white gloves as to not dirty the goods. 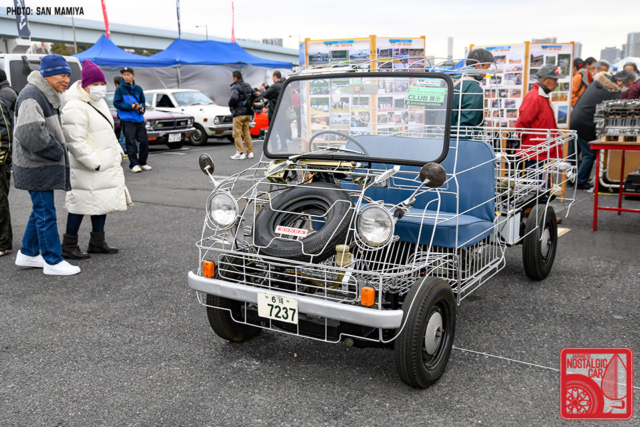 Back in the 60s wire frame models were very popular. In the US, you probably would have seen a Beetle or Microbus with the treatment, easily done because the body was separate from the chassis. It was typically for an educational purpose, or to showcase the performance parts that would otherwise be hidden beneath bodywork, because the model would still be instantly recognizable in the outlines.

Often, the cars would start out with beat up bodies. This was probably the case with this Honda T360. Given the shininess of some of the parts underneath, this could have been used to show restoration parts. Or, it could have been done in period, as in the past, the New Year Meeting has had cutaway cars from the Tokyo Motor Show. Notably, this car does have a very early single-digit license plate. 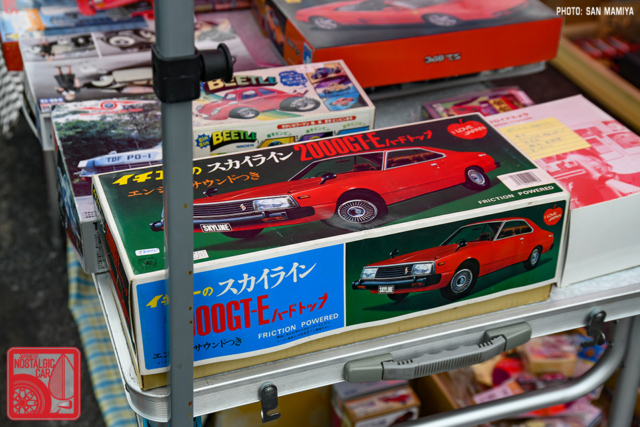 From the 1950s to early 1970s, the number one export toy out of Japan were tin plate, often friction-powered toys. During the 1970s, diecast like Tomica began increasing in popularity, and this Ichiko Nissan Skyline C210 was basically one of the last widely sold tin friction models. 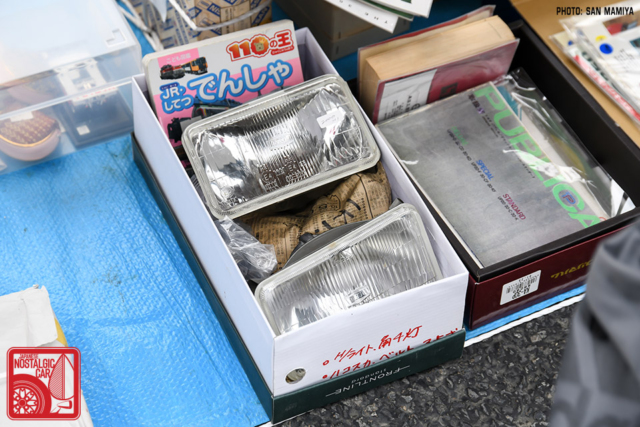 If it’s real parts you’re after, then you might come across a set of Iki lights. These would have been aftermarket back in the day, a halogen H4 upgrade for your square-headlight Cresta or Carina. You can also find a brochure for your Toyota Publica — all in one spot! 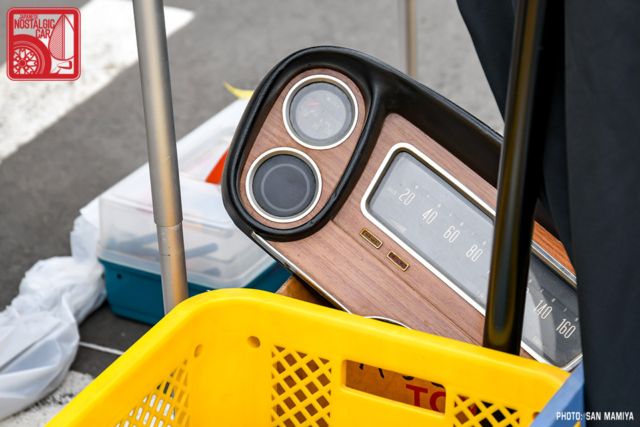 We’re not sure what car this instrument panel came out of, maybe some Nissan model [UPDATE: It’s a 130 Cedric]. But, given the horizontal speedometer an minimal gauges, it’s clear that it is very old and amazingly complete. 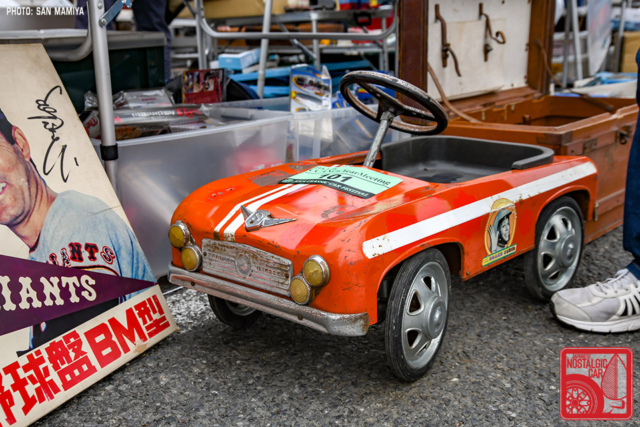 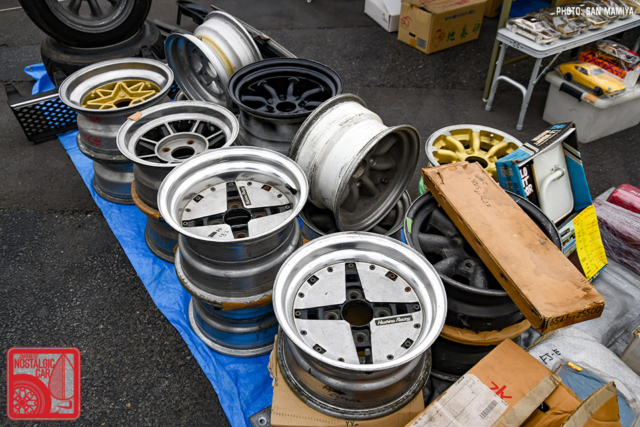 A seller of vintage barrels had a set of early Hoshino Racing wheels, 1-piece  Techno TRVs, and the requisite assortment of Hayashis and Watanabes. 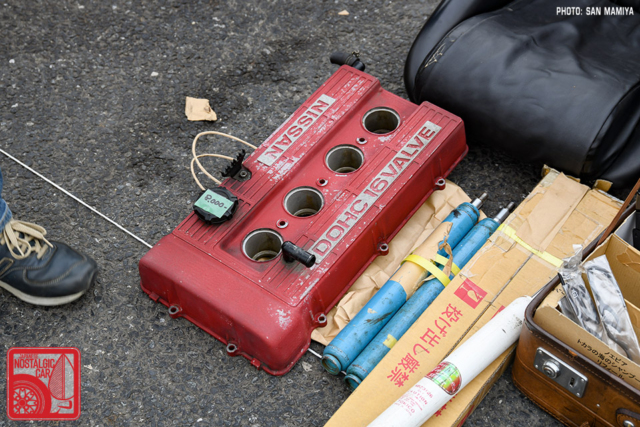 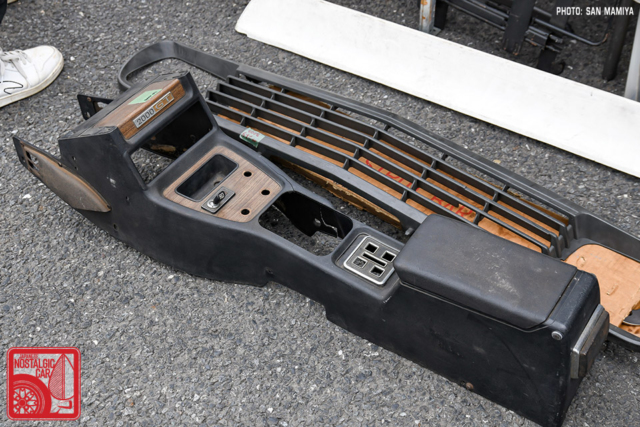 Random parts are everywhere. Perhaps you require a later, square-headlight Sunny Truck grille. Or maybe you need a Hakosuka center console. Incredibly, the console, though cracked, hasn’t been completely thrashed. A lot of them were cut up to fit a component stereos. 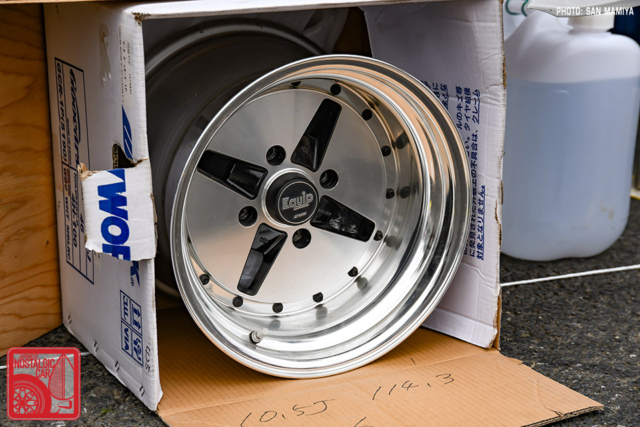 Nearby, a beautiful, unused Work Equip 02 with a very wide 10.5J barrel awaited a new owner. 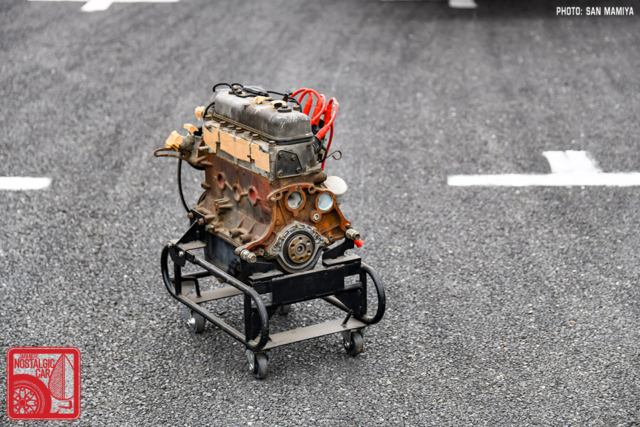 Seeming lost was a lone Toyota 4K engine, complete with ultra high tension leads. The most interesting part about this is the engine stand, which looks like it was custom made specifically for this motor. That could mean it’s from a shop that specializes in 4K motors, which could in turn mean it’s got some hop-up parts within. If it comes with the stand, it’s an absolute bargain. 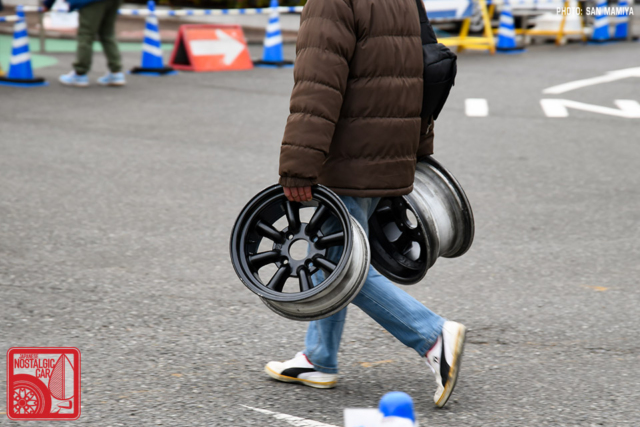 It’s easy to get carried away if you find a deal, but just remember that you’ll most likely have to lug whatever you buy back to your hotel by hand, on the train. Like the unspoken rule against eating while walking, carrying bulky items on the train is a major social faux pas in Japan, so buyer beware. 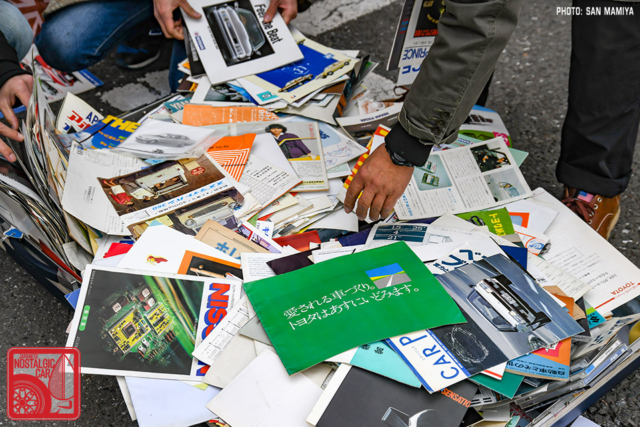 In Japan, high quality brochures are a pastime and can trade for very expensive prices. However, the good news is that a surprising number of them are not discarded. You can find everything from a Nissan newsletter with a circuit board on the cover discussing the dawning of the computer age to a Mitsubishi Cordia pamphlet to a rare Suzuki Suzulight Van 360 brochure. Also, the Japanese penchant for American Red Wing shoes is on full display here. 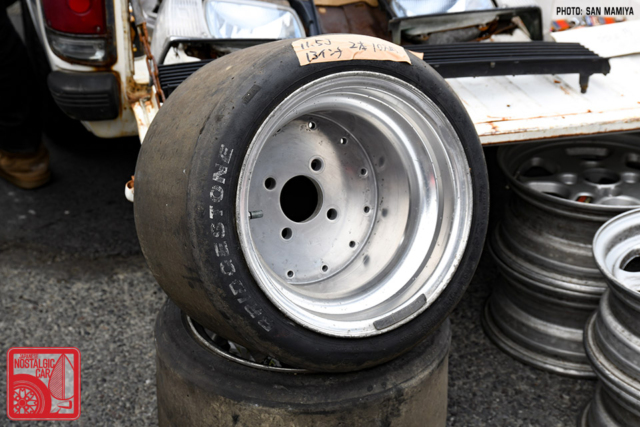 You can also find yourself a set of super-deep old school 11.5J SSR MkI wheels. Don’t be alarmed that there’s no nuts; it’s welded in the middle and can run as-is. The big draw here are the vintage Bridgestone racing slicks, still round and not dry rotted, meaning they were probably stored. Also, note the very cool balance weight, which has no clamp. It’s affixed with adhesive, and yet perfectly shaped for the circumference of the 13-inch rim. This was probably from an old TS race car. 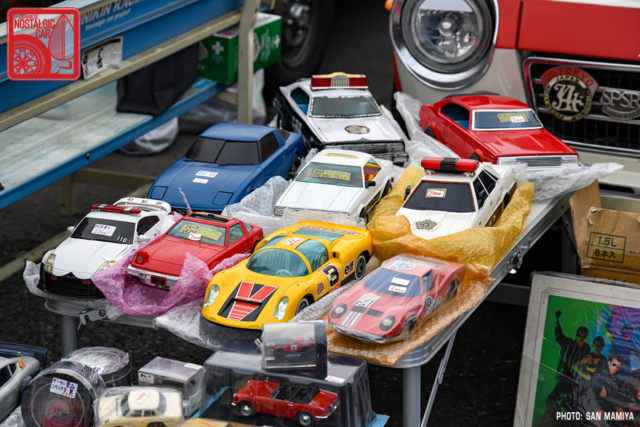 Next is an interesting pastiche is composed of a Works-painted Fairlady Roadster in SCCN colors in the background, mixed with a series of toys showing the changing of the times. In front of the Fairlady is the very C210 Skyline friction toy that would be inside the box you saw in the photo above, along with the police version of the same.

After the tin toys fell out of fashion, plastic became the norm — a trend reflected in the R30 Skyline police car and coupe. The SA22 was long lived enough to see both tin and plastic versions. Later, the friction motors were replaced with batteries, as the plastic bodied cars show.

There are other goodies too, like a Hachette subscription Honda S800, and a 1:72 scale Safari S30 Z a plastic tube, which can be connected with other cars in the series. 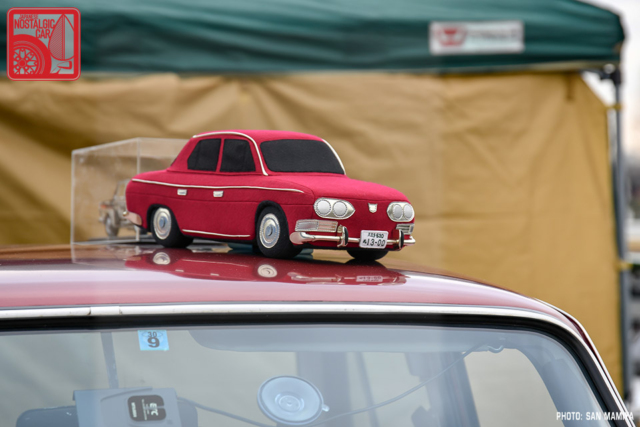 On top of a Hino Contessa was a plush replica of the exact car. They’re by Rocket Craft, which can custom make a stuffed version of your exact car. Behind it is another scale model of a Hino, likely also customized. 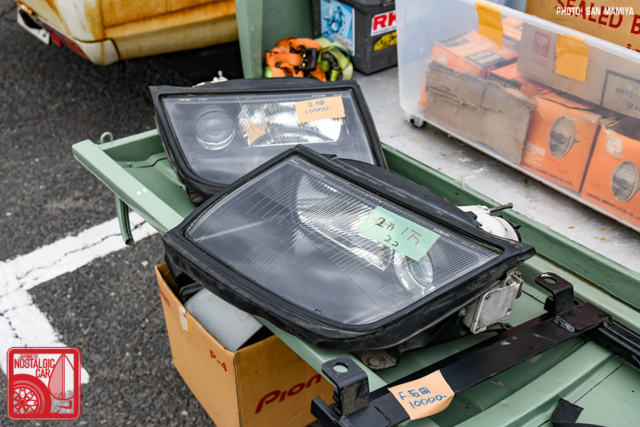 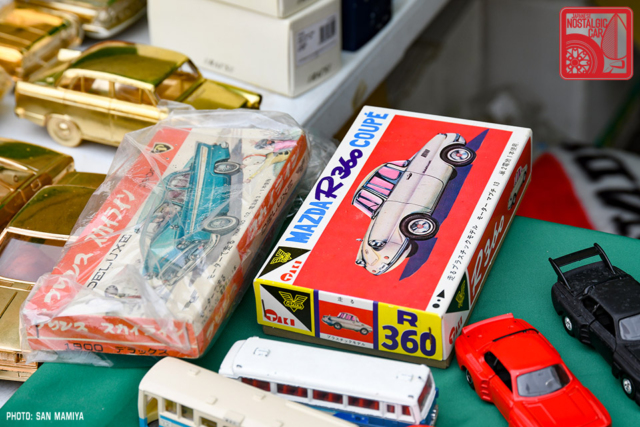 The climate in Japan is humid and wet, so to see a rare Otaki R360 model kit whose box is absolutely mint and without mildew or deformation is pretty insane. The Skyline 1900 is an even rare find. Beside them are Shinsei Mini Power BMW CSL pullbacks from the 70s. 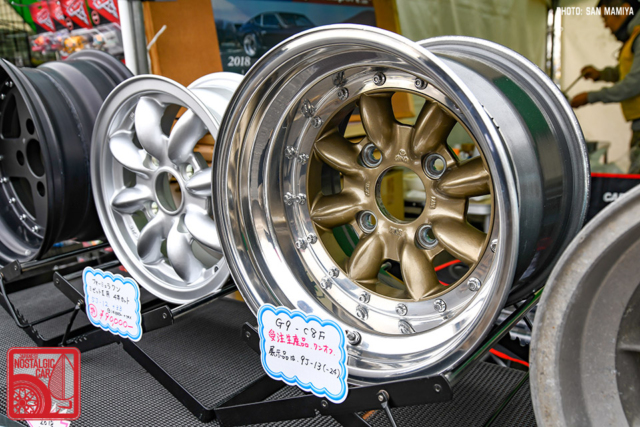 If you need a set of 3-piece Panasport G9 C4F or C8F wheels in 13-inch sizes for your TS Cup racer, look no further. These would fit an older Sunny or Starlet racer with the flared Touring Sedan flared setup. 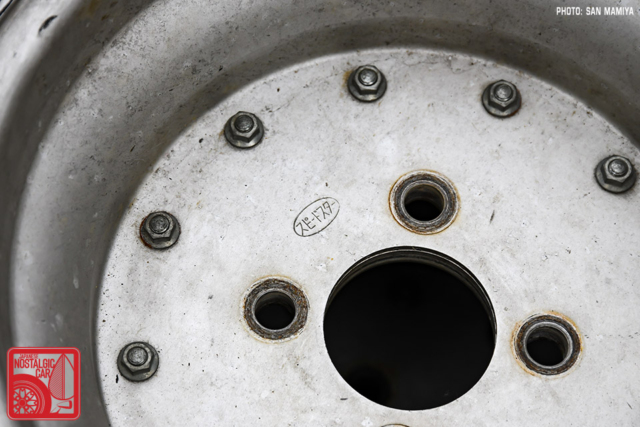 An early SSR MkI, with bolts. 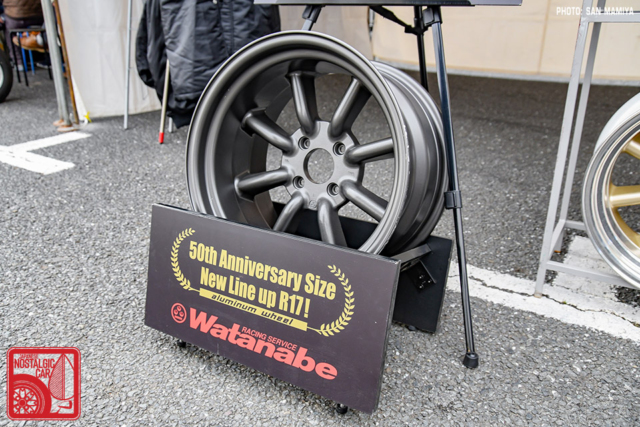 RS-Watanabe was on site to show show their 17-inch wheel, created for the 50th anniversary of the classic Watanabe 8-spoke. 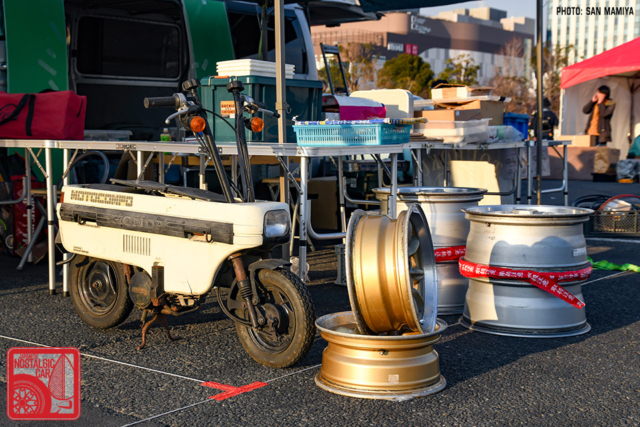 There was, of course, no shortage of Honda Motocompos, even if there were no Honda Citys to stow them in. Original colors were white, yellow and red, which makes one finished in light olive particularly interesting. 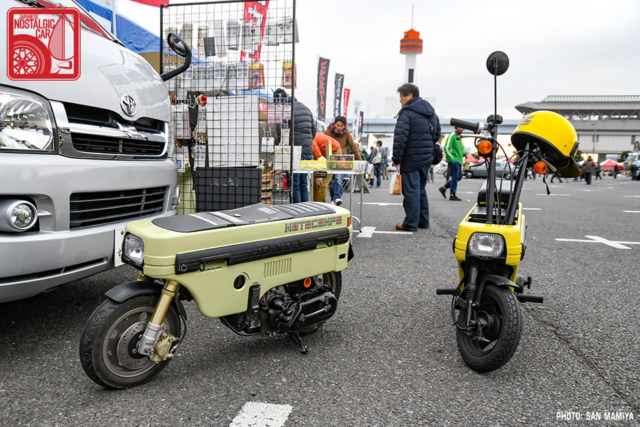 Though it has been custom colored, it still wears the original graphic scheme, which are available as a reproduction decal kit. Upon closer inspection, it also wears aftermarket shocks, non-standard wheels, and a Brembo disc brake setup. Our favorite part, however, are the IRC “footprint” tread tires. It’s a very Japanese style, one that looks like it could be stock but is actually loaded with subtle yet serious mods. 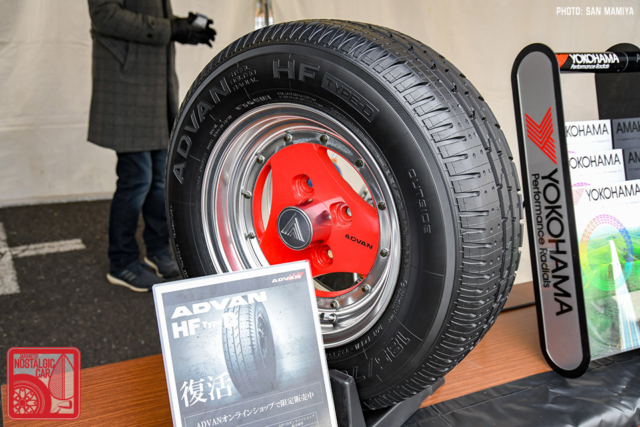 At the Yokohama Tire booth the big news was the recently re-released Advan HF Type D tires. A reproduction of an iconic performance tire originally sold starting in 1981, it was known for its asymmetrical tread pattern (read more about it here). What better way to show off the tire than with a new old stock Advan A3A with proper center cap? 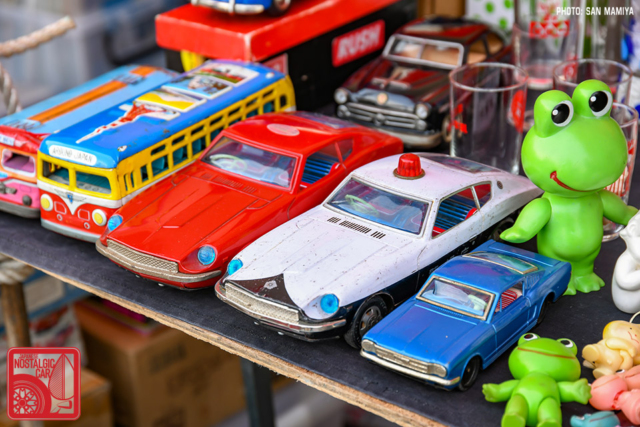 Another seller had original and very popular Ichiko S30 tin toys. Judging by the grille, they depict a Fairlady Z432. Naturally, there’s a police version, but the red one has the original sticker on the roof — astounding. Most of these toys were exported, so they often show up on eBay. Ironically, they are rare in Japan because the climate often meant they were rusted or recycled. Also included in the mélange are a smaller-scale Mustang toy, which was also popular, and the frog mascot of the Kowa pharmaceutical company. 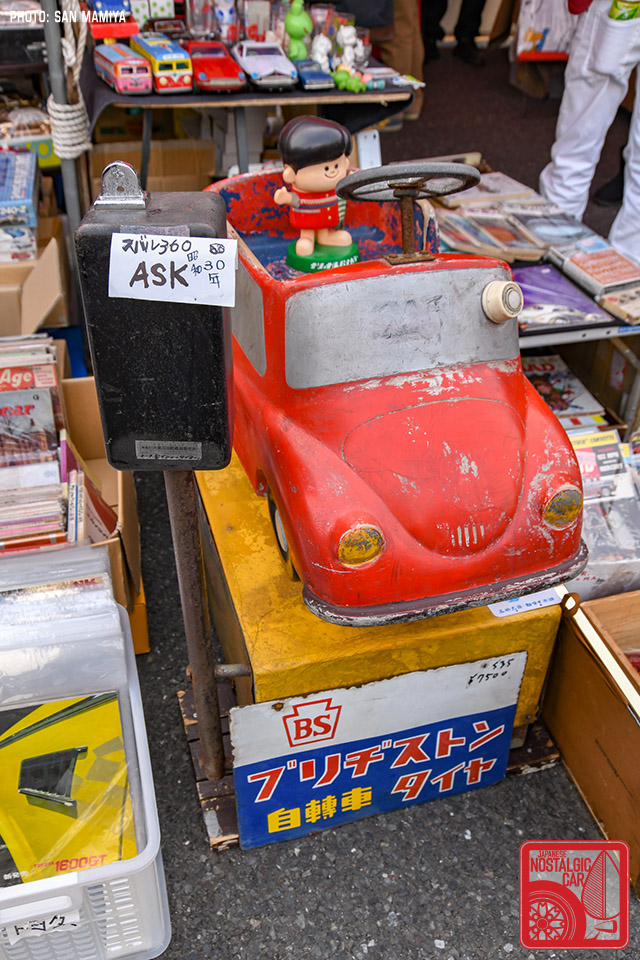 You could even buy a Subaru 360 kiddie ride, the kind you would see by a department store. Toss a few yen and it rumbles for a bit and probably plays a song. If we’re reading the sign correctly, it hails from 1955, even though the 360 didn’t come out until 1958. Behind the wheel is another corporate mascot, a little dude from the National Corporation.

Keen eyes, however, will notice a brochure for the rare Corona 1600GT in the bin beside it. The little brother to the Toyota 2000GT is completely underappreciated, but  that’s the beauty of the show. You never know what you’ll find while strolling through the lot.