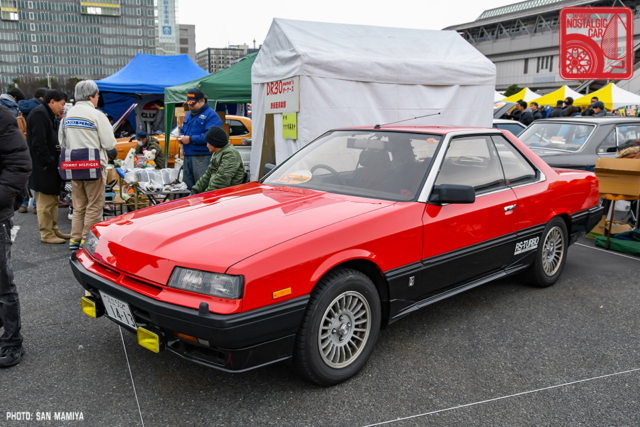 Our first two installments of the 2018 New Year Meeting featured cars from 1960s Japan. Those beautifully crafted machines from the early days of country’s motorization served a specific purpose, but the 1970s is when the modification culture became truly widespread. 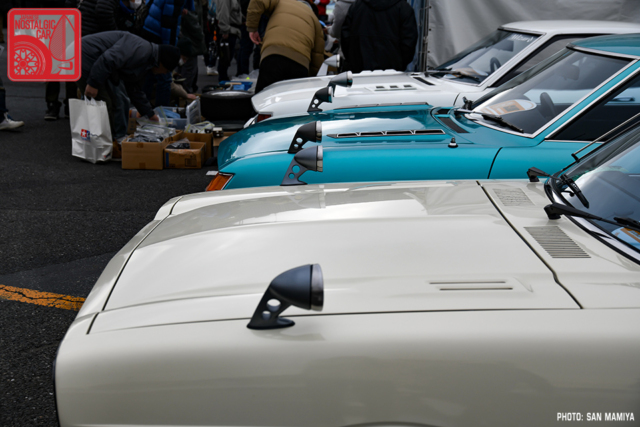 An easy and popular mod for larger Toyotas like these TA22s and TE55 was replacing the stock fender mirrors with Publica Starlet fender mirrors. Smaller and with lightening holes, they were offered in the Tosco parts catalog or parts departments. 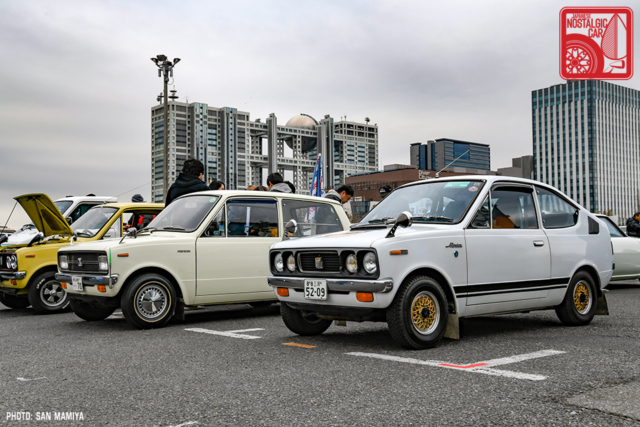 Mitsubishi Minicas, especially the sporty fastback Skipper model was also a popular car for modding. Its normal style PCD also made it more attractive for wheel suppliers than those making only specialty rims for kei cars. 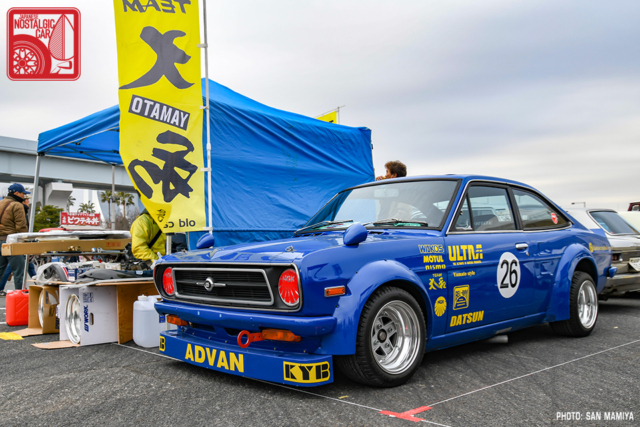 This B110 Sunny participates regularly in JCCA vintage racing events. The TS Cup is a source of very cool and incredibly spot-on details for street replicas with proper liveries of their era. 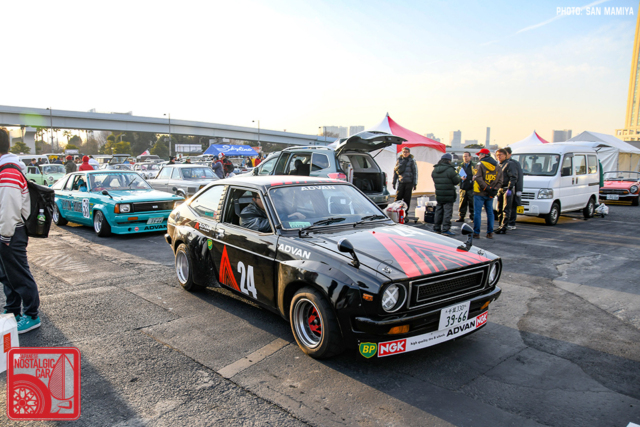 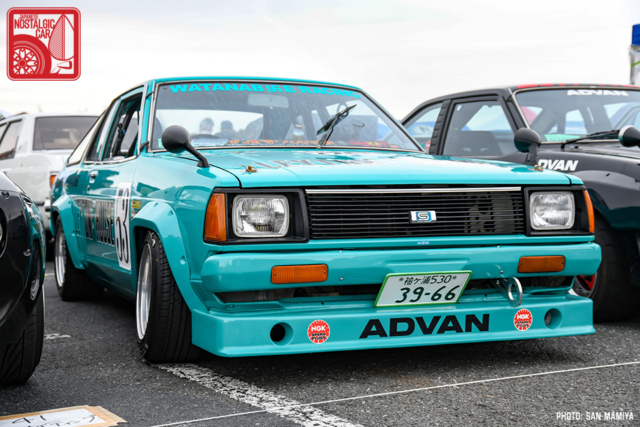 Take this Advan KP47 Starlet and Leyton House-inspired B310 Sunny, for example. In theory, with proper tuning, a slightly muffled exhaust, and an extra seat for a friend you can drive a real race car on the street. 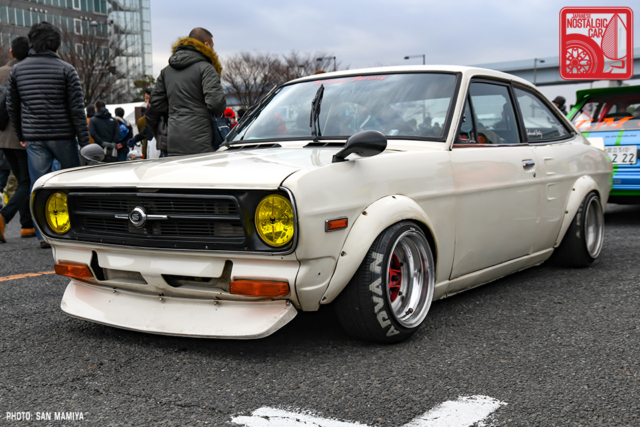 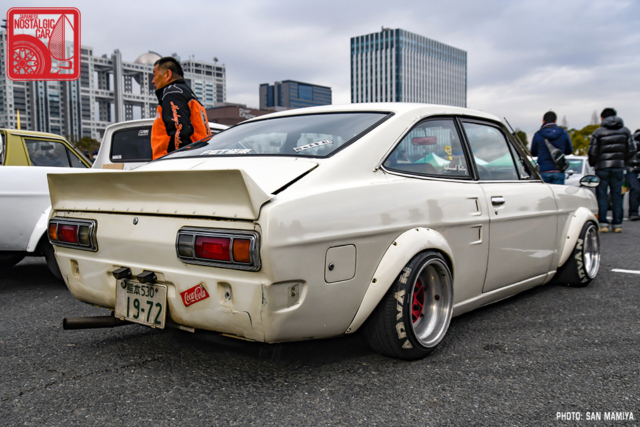 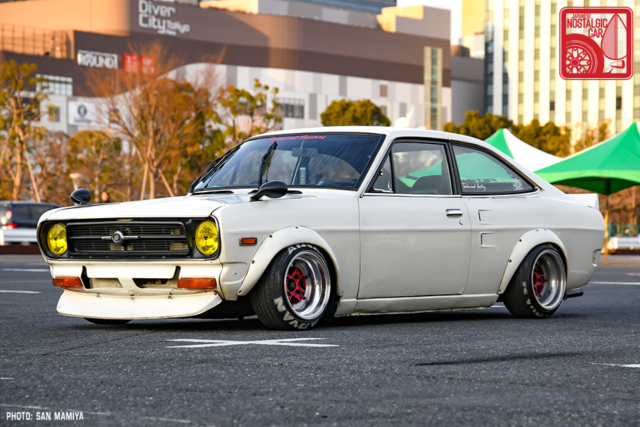 For a more street fighter style, there’s the world-famous B110 Sunny owned by Teru the Damaja. The yellow headlights look really good with the color scheme of the small-diameter SSR MkII wheels and and white body. This car is driven everywhere, and around Tokyo nonetheless. 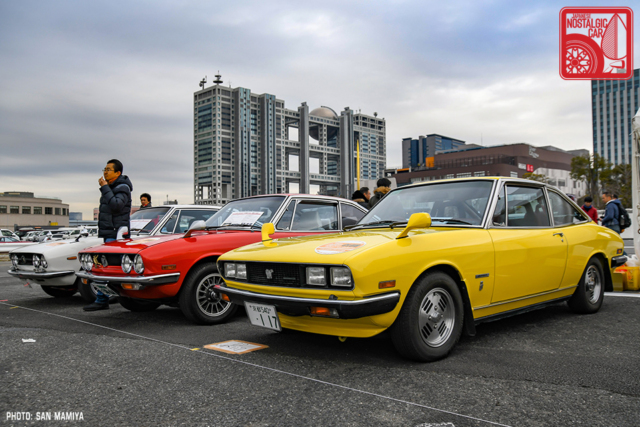 A group of Isuzu 117 owners arranged a perfect generational lineup, presenting (from left to right) and early hand-made 117, a round-headlight zenki, and a square headlight kouki. Each example was finished in representative colors to boot. 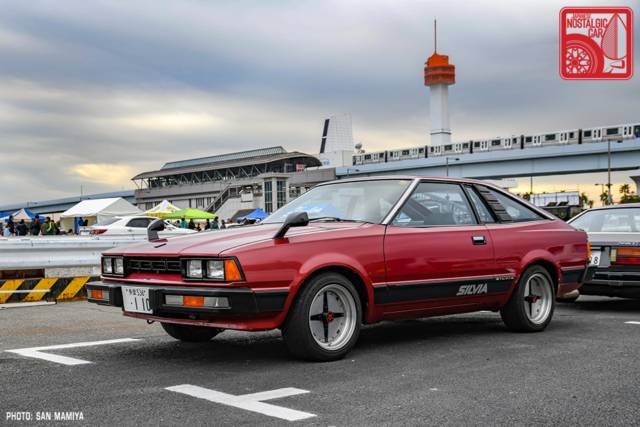 A mint S110 Nissan Silvia was bone stock except for the addition of some aftermarket wheels. However, this was no random choice, as the iconic Hoshino Impul debuted on the Silvia Group 5 race car. This street car looks like it came straight out of the Hoshino catalog. 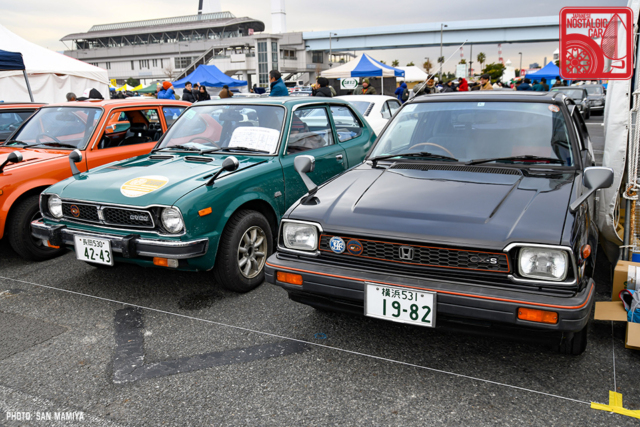 A Honda Civic owners’ club showed a nice generational display the early hatchbacks. Of note is the black second-gen in top-spec 1982 in CX-S trim. The CX was the hotted up model of the gen-two Civic, with an extra 5PS over the standard 1.5-liter, to make a total of 85PS. The “S” part of it was added later models, and stood for “sunroof,” which was a big deal on a car of this class back in the day. 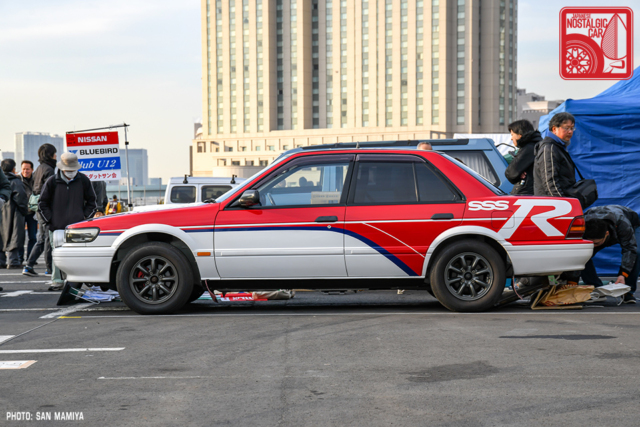 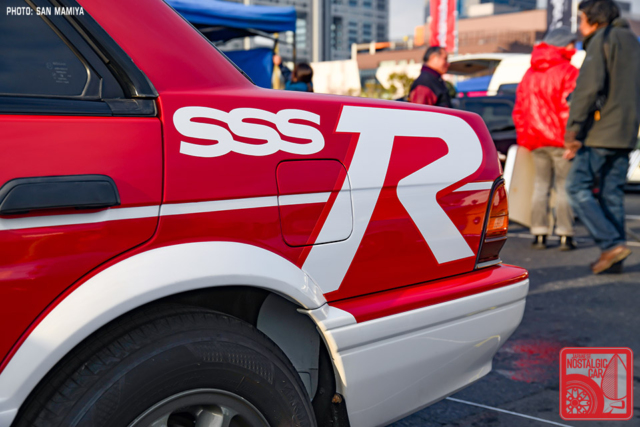 The U12 Bluebird club brought out a mint (look at the wheel wells) and rare version of the Bluebird SSS-R limited special with factory-offered livery. The car was developed by Autech specifically for rally competition and came with full-time AWD, an 1.8-liter twin-cam turbo CA18 engine, and ATESSA four-wheel steering. This particular specimen also included rare optional 8-spoke NISMO Wheels. 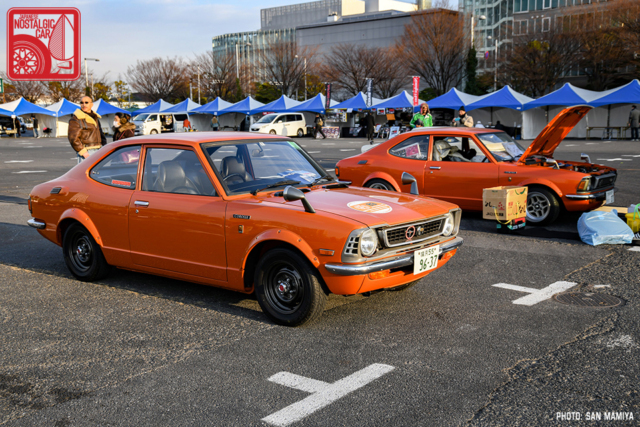 In another corner of the show as an ultra rare untouched and unharmed kouki TE27 with factory steel wheels and caps (!).  It is truly a rare sight in Japan (or anywhere, for that matter), and provided a great juxtaposition with early, period-modified, TOM’s-wheeled version next to it. 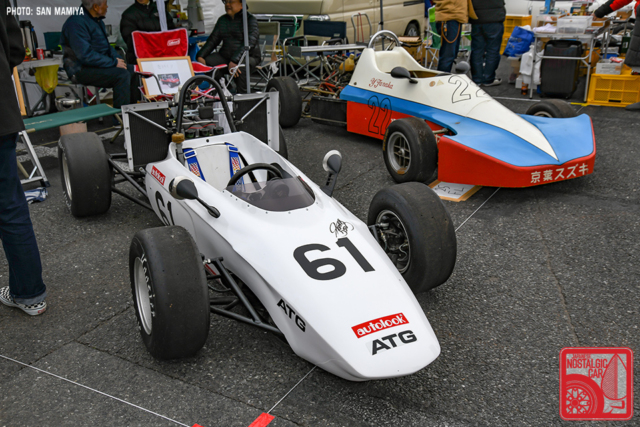 Autolook designed and spawned a whole line of popular Showa Era car accessories, from pedals to gear knobs to shift boots. The company was heavily involved in racing, with 360cc open-wheeled racers built for club competition with kei engines. If you peek inside  many of these cars, they will be sporting at least one of those Autolook accessories. 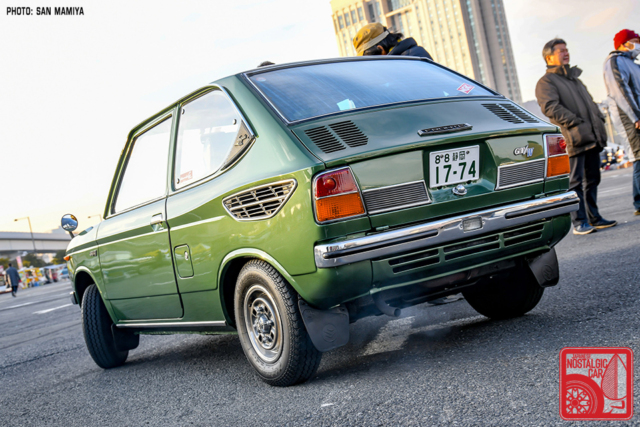 Nearby, a classy green Suzuki Fronte with cultured period mods like a slight lowering and beauty-ringed gunmetal steelies oozed era-appropriateness. 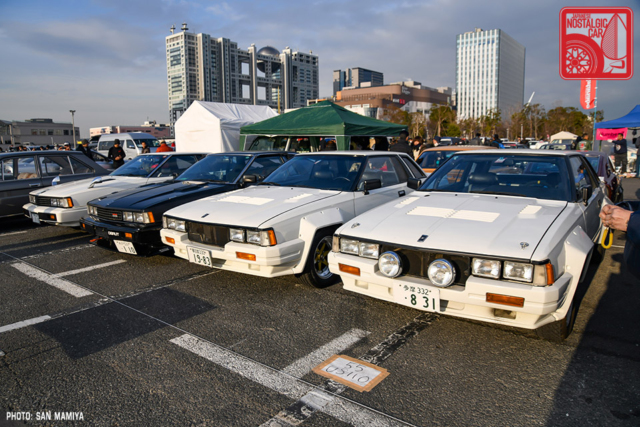 Another beautiful lineup consisted of Nissan’s rally weapon 240RS, displayed side by side with the notchback Silvia on which they were based. As with the Fiat 131 and Nissan Violet sedan rally cars that preceded it the mid-1970s, the 240RS popularized the square cut fender flares. 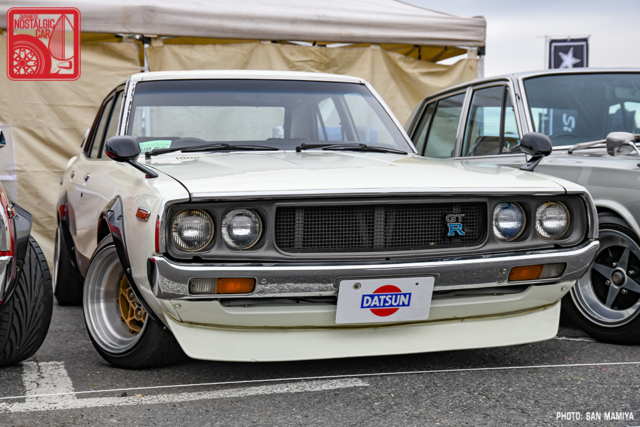 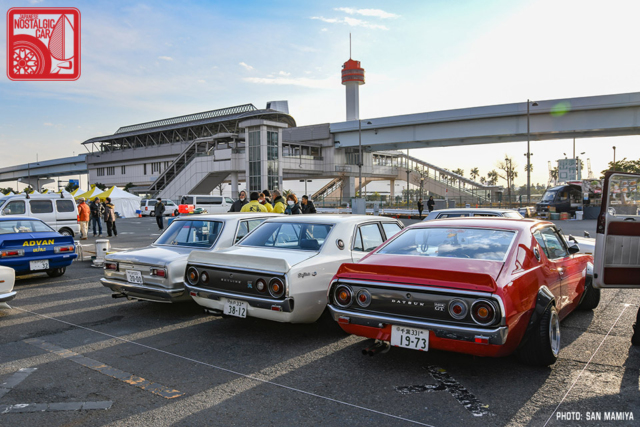 For those who prefer their Skylines slammed, a great lineup of exemplary modded Kenmeri, Yonmeri, and Hakosuka show the evolution of the the shakotan or kaido racer style. 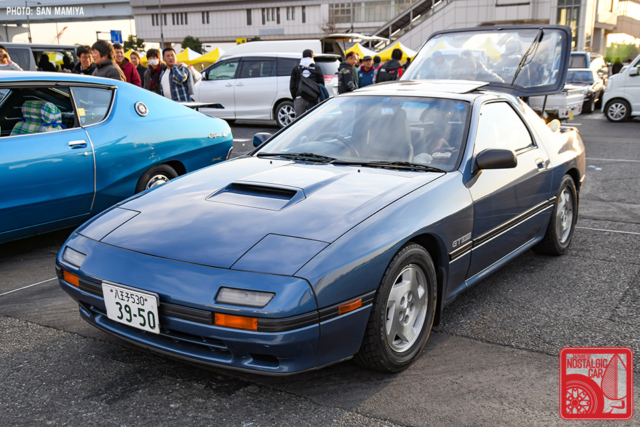 Much like its younger FD brother, many FCs were modified and harassed beyond recognition in their day. It’s incredible to see an untouched and, judging by the faded fender, a survivor stock specimen escape that fate. 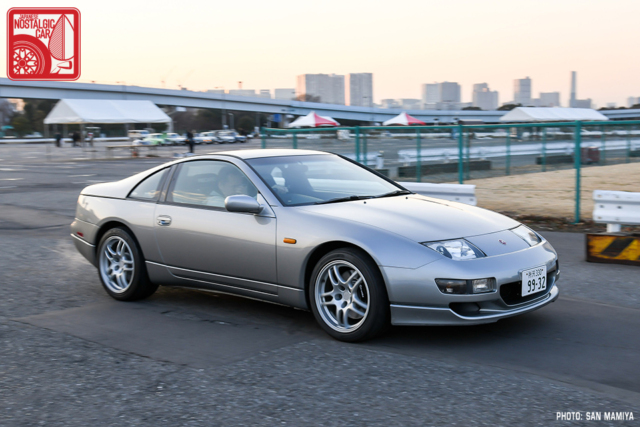 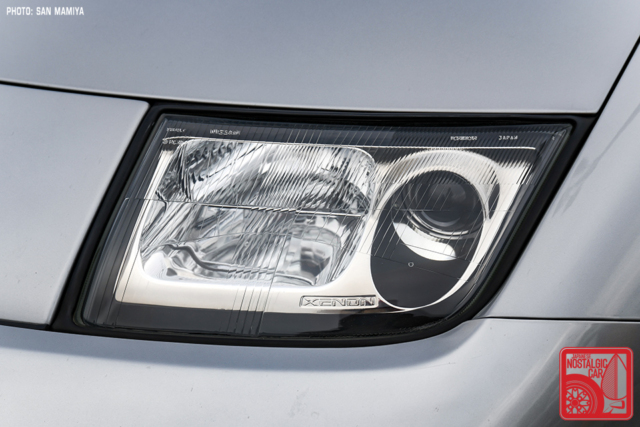 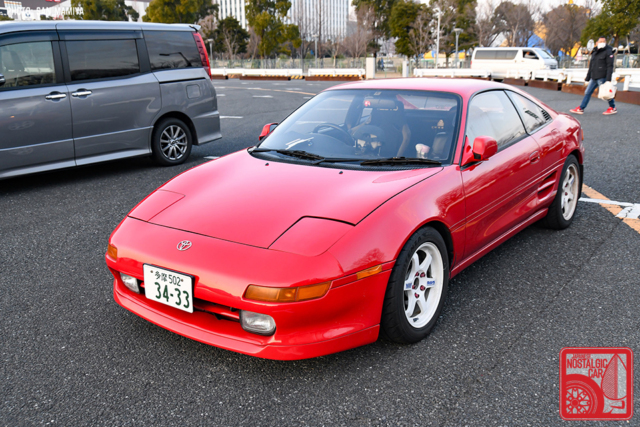 We also saw great examples of the Z32 and SW20 in their twilight later versions. The model updates were evolutionary and did not disturb the original design vision. The MR2 was beautifully presented with white TE37s with nary a body kit in sight. The Z32 was notable too, as a kouki naturally aspirated model with beautiful headlights. For proof that R33 GT-R wheels look good on everything, look no further. 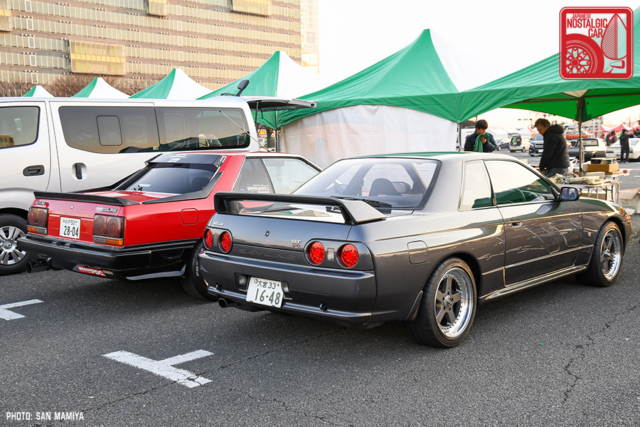 Tucked behind some booths were a DR30 Skyline decked out with full Seibu Keisatsu aero regalia. Beside it was a restrained and untouched R32 with period Panasport G7s and a conservative drop and subdued exhaust. It was a perfect representative for the tasteful side of Bubble Era tuning.
Great r30s too 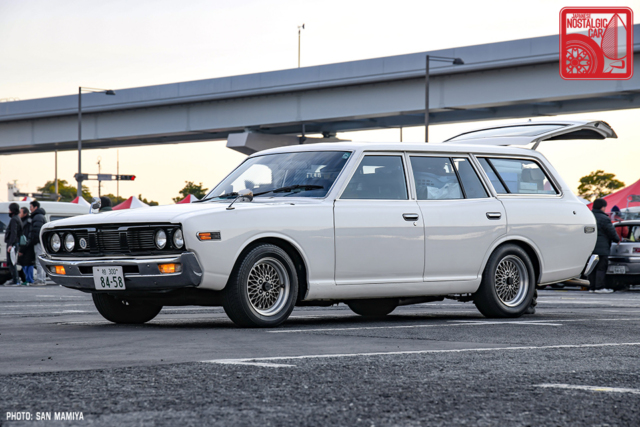 The Gloria and Cedric wagons were an incredibly common sight back in the day, from delivery cars to leisure vehicles. We’re glad to see one still in one piece with a great set of period-sized mesh wheels. 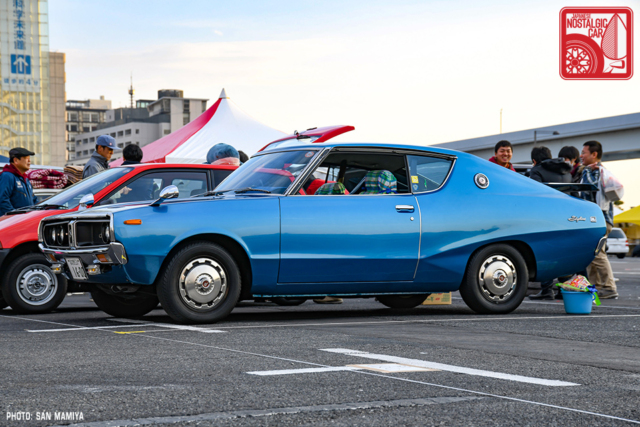 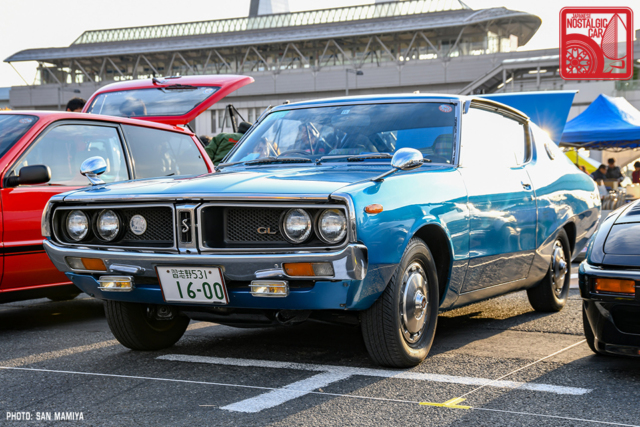 One of our favorites was a beautiful and rare 4-cylinder kenmeri Skyline in high-end GL trim. What’s more, this car was finished in the iconic blue made popular by the Ken & Mary commercials.