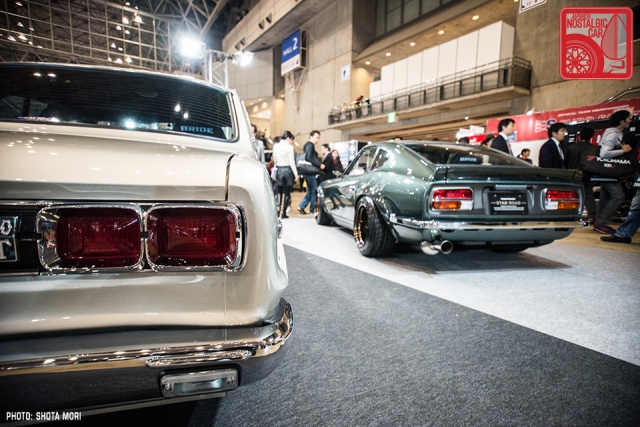 The Tokyo Auto Salon has a reputation for churning out some truly bizarre automotive works, but these day some seriously classy classics can be found amidst the VIP vans and drift missiles. You’ve seen the examples modified for speed and show; here are the cars built for nostalgia.

As is their custom, tuning house Star Road brought a set of tasty Nissans, both familiar sights that we never get tired of seeing. Though they are known for more tuner-y fare with their Neo Vintage line of aftermarket parts, but their grey-green Fairlady Z is their ultimate interpretation of a well-built driver with all mod cons under a classic body.

The Hakosuka Skyline is a favorite, but as uncut surf lines increase in popularity this 2000GT showcases how the company’s Glow Star wheels are sized perfectly for rear wheel opening without the need to disturb the car’s original lines.

Nagoya-area tuner Rocky Auto has made news with the Rocky 3000GT, a completely scratch-built recreation of the king daddy of the JNCs, the Toyota 2000GT. Since real 2000GTs are too valuable to modify, Rocky-san went through enormous effort to remake every body panel and give his customers the freedom to install any drivetrain they want. Examples have included a Prius hybrid system for the eco-minded and a 2JZ straight-six that keeps the spirit of the original while adding Supra-level power.

It’s only natural, then, that Rocky’s next step would be a convertible 2000GT. Though never sold officially that way, back when the car was new — and worth considerably less than $1 million — two had their tops chopped off for the film You Only Live Twice. People have wanted to make replicas of the movie car ever since, but it never made sense to do it to a real 2000GT (though a couple of owners have). Thanks to Rocky-san, you can now have one without the guilt.

Work Wheels put up a gorgeous gallery of their wheels both old and new. Classic models ranging from the Equip 01 to Rezax to Ewing were all arranged against a white wall in a museum-quality display. 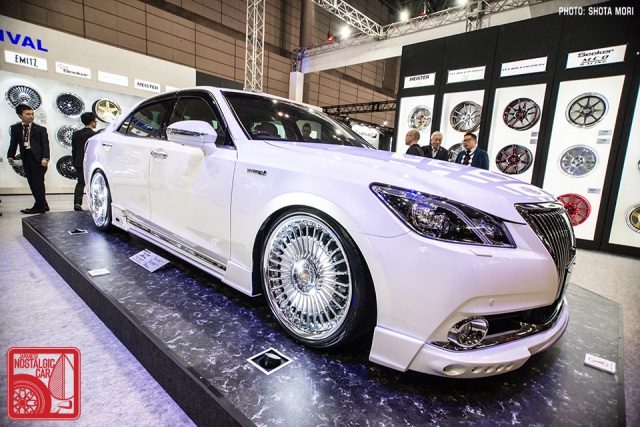 For the VIP fans, an S210 Toyota Crown sat on dazzling new Work Emitz wheels. The design certainly gives a feel of solidity and stateliness for the discerning luxury sedan owner.

Of course, the big reveal was that of the Equip 40. As we mentioned, the wheel was developed to celebrate the anniversary of Work Wheels’s founding, as well as Team Equip, Work’s in-house racing team after which many of its wheels were named. Showcasing the wheel was a gymkhana-ready Triumph TR3A with aero bits like the front spoiler and overfenders made by TRA Kyoto of Rocket Bunny fame. Available in a variety of finishes, fitments and widths ranging from 5.5 to 13.0J, the 15-inch modern take on the classic 4-spoke was a hit. More information can be found at the Work Equip 40 website.

Liberty Walk’s superb tribute to the glory days of kaido racers made a return this year. Though we saw it at SEMA and at its debut at the 2016 Tokyo Auto Salon, it’s one of those cars we never tire of. Loads of Japanese street culture is embedded in this build, from design details inspired by legendary Japanese race car drivers to easter eggs referencing Liberty Walk founder Wataru Kato’s hometown. You can find all of the details from our report last year.

Endless Brakes has outfitted everything from rally teams to SuperGT racers, but these days they are continuing promotion of their custom brake upgrades for nostalgic cars. And when we say nostalgics, we don’t mean common platforms like S30 Zs and SA22 RX-7s, but really obscure cars from the 1960s. We saw this with a Toyota Sports 800 at Nos2Days last year, so perhaps the appearance of a Publica — which shares many of the same components as a Sports 800 — isn’t a total shocker. 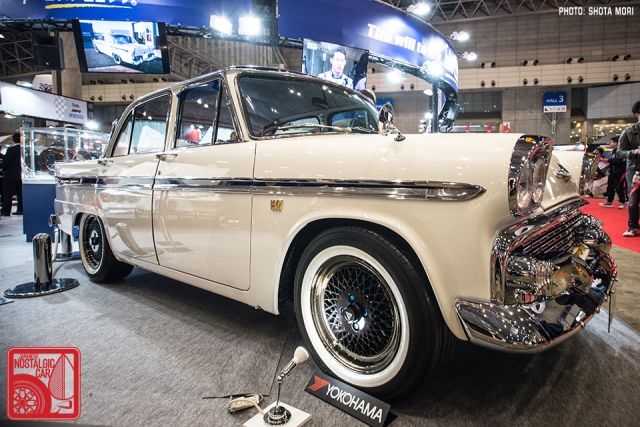 But then Endless also did the same for a BLSID3 Prince Skyline! This a car nobody is modifying, but on which a brake upgrade is probably a literal life saver. On top of it all, the super early Skyline was rocking Enkei 92s and whitewall Yokohamas too!

While many modern AE86 builds tend towards the extreme, RK Factory specializes in clean lines and performance upgrades that are heard, not seen. If you have a weathered AE86 that has seen better days, RK Factory can, as with the demo car displayed, take it completely down to the frame for body work and a respray; fit the interior fitted with RKF’s custom-made panels, seats, dash, and carpet (modern materials, old shape); and build out your 4A-G. Details like the black door guard strips can be replaced with new, carbon ones. The company’s motto is “Pride of Japan. AE86 restoration project.”

In the same vein, Restored JP brought a DR30 Skyline that at first glance appears stock, but is actually a demo car for the company’s line of FRP and carbon body panels. Everything from the hood, trunk, doors, fenders and bumpers can be replaced with composite substitutes. 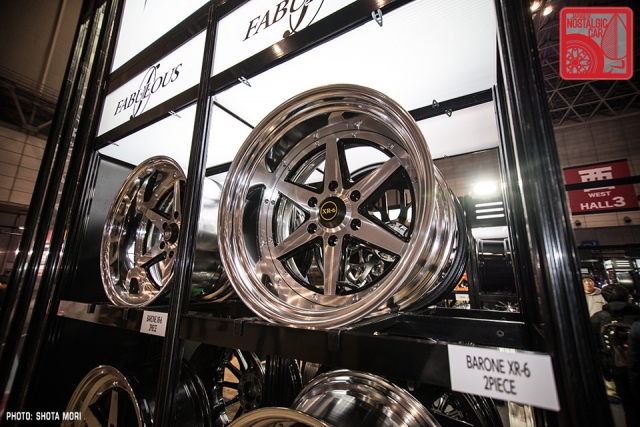 Wheel maker Fabulous is typically serves the VIP and Euro luxury market, but their new Barone XR-6 2-piece looks suspiciously like a modern, large diameter interpretation of a Longchamp XR-4. With a 6-lug pattern, it appears to be made for the H200-series Toyota Hiace, a popular van platform for modding in Japan.

We saw this year that Sunny Trucks were big at the New Year Meeting, and apparently they’re a hit with the millennials as well. Students at two separate technical colleges decided to build not just Sanitora, but nostalgic ones harkening back to an era before they were even born.

The Tokyo Automobile University School was described as yancha style, a term that means “baby” or “child” but in this case refers to what a boy racer might do to his B120 — wide molded fenders, a chin spoiler scavenged from a Daihatsu Mira TR-XX, Advan A3As in bright red, and grounded to the ground. Despite the name, it’s actually a very well done shakotan Sanitora.

Students at the Saitama Institute of Automotive Technology began with a 1992 Sunny Truck (the B120 series was built from 1971 to 1994) and turned it into a Showa Era service truck for National Electrics. That hugely popular brand is, of course, now known as Panasonic in the West, and the company granted the school permission to use the old logo and colors. Retro company colorways are back, and this is probably the best we’ve seen. Retrofitted with an earlier headlight and grille combo (late-model B120s had oval sealed beams), SSR MkIIIs and an A-series dipped in chrome, it’s another beautiful Sanitora build. 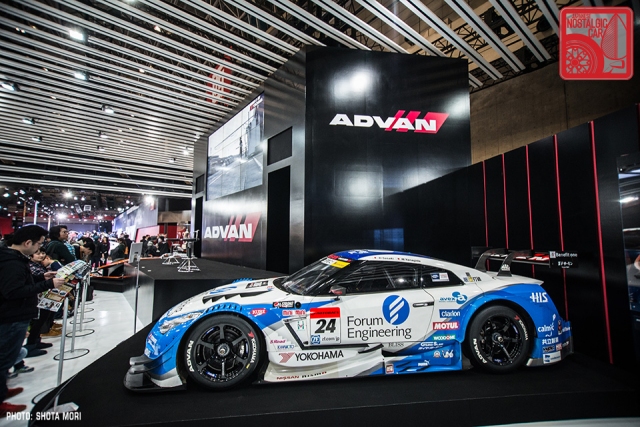 SuperGT racers are getting ever louder liveries these days, with chrome and neon colors colorways featuring heavily. So when a car — like the Forum Engineering R35 GT-R displayed at the Yokohama Tire/Advan booth — goes with a simple, classic color scheme it’s refreshing as it recalls the glory days of JGTC.

The star of the Yokohama display, however, was the holy grail of Z-cars, a Nissan Fairlady Z432R. Though it shares only one letter difference with the already-potent, S20-powered Fairlady Z432, it’s a completely different car built specifically for racing with with weight savings. The most obvious change is the FRP hood, but close inspection will reveal acrylic windows instead of glass, and a micrometer will uncover 0.2mm thinner gauge steel than the standard model. In total, it’s over 220 pounds lighter. Because it was never street legal, it is estimated that only 10 were sold. 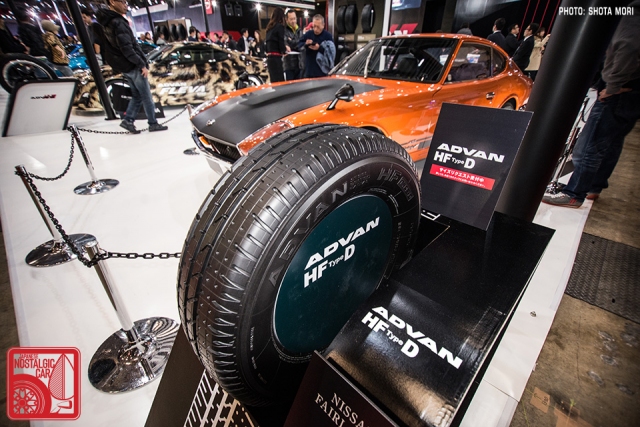 Yokohama’s purpose of wrangling a unicorn for the Auto Salon was to introduce the re-release of its famous Advan HF Type D tire on the occasion of the company’s 100th anniversary. Debuting in 1981, the originals featured a racing slick on the outer half, and Yokohama’s innovative dimple-treaded design on the inner. The modern reincarnation of course has channels on the inside for street driving, but it is quite possibly the most appropriate tire on the market today available for historic cars.

We couldn’t resist parting with one last insane creation — this is the Tokyo Auto Salon, after all — and that is the Obayashi Factory Nissan Cube. Sure, it’s a rolling speaker amp , but painted in traditional bosozoku purple and fitted with bubble flares and the front end of a C130 Nissan Laurel, it’s the kind of thing we’ve come to expect from Japan’s maddest car show.