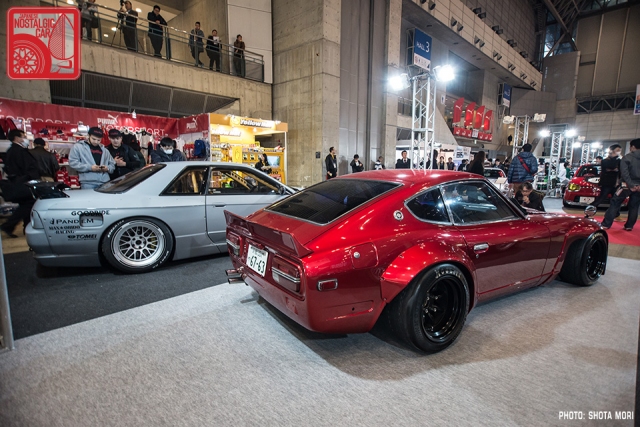 Since its inception in 1983, the Tokyo Auto Salon has been Japan’s showcase premier exhibition of automotive trends. Back then, it went by the very literal name of Tokyo Exciting Car Show, but the idea was the same — showcasing what Japanese tuners and tuning houses could do. The name has changed, but the goals have not. 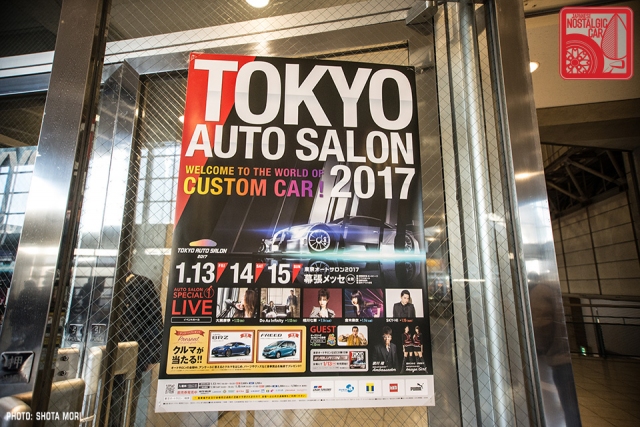 These days you’ll see mostly automobiles glitzed up in the vein of VIP or drift, but scattered throughout are specimens of vintage Nihon steel. We know half of JNC‘s readers may not dig the tuner-y motifs on such cars, but the other half will probably think they’re the coolest thing since sliced milk bread.

Leading the charge of old school cars with new school style is Rocket Bunny, a tuning house whose mission is to widebody all the things. The Pandem body kit is a modern interpretation of the gurachan aesthetic that counts Sung Kang among its fans, but now the line has been extended to neo-classics like the R32 Skyline GT-R. 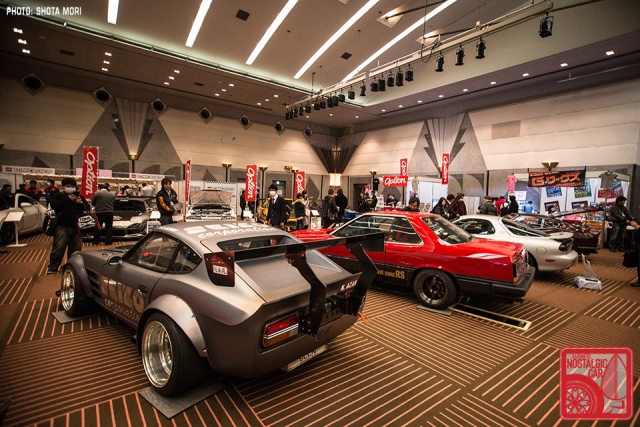 In the Tuning Car area for cars featured in Japanese media such as Option and G-Works, a matte gray S30 Z got plenty of attention. How could you miss it, with its massive flares and well-deep Panasports measuring 11.5J on the rear? Built by Auto Service Watanabe, its GT wing and stripped-off bumpers suggest a time attack weapon. Given the exterior, it’s a little surprising that the engine was kept with an old school L28 (bored to 3.1 liters, of course) mated to a Hollinger sequential shifter. No word on the power output, but if Watanabe’s previous build are any yardstick we’re looking at around 350 horses at least. 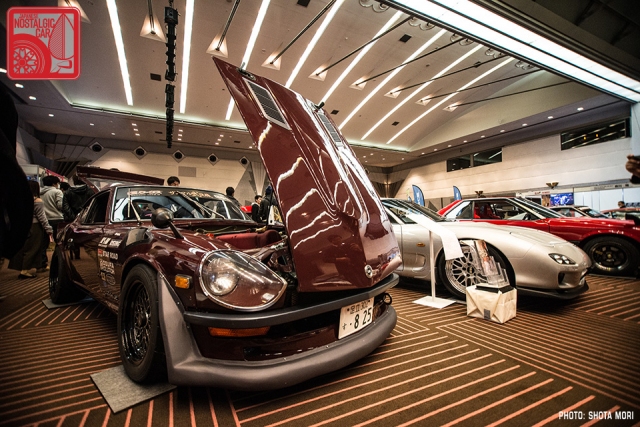 Down the line another Fairlady Z was a standard short-nose finished, interestingly, in the Grand Prix Maroon typically seen on the 240ZG. With an L-gata under the hood and Star Road Glowstars, it was a nicely built example that would have been a beautiful period classic had it not been for the chunky front chin spoiler.

The renowned rotary tuning house RE Amemiya showcased several cars, including an RX-8 and a Skyactiv diesel CX-3, but we suspect JNC readers will be most interested in the 20B 3-rotor naturally aspirated FC3S RX-7. Though it’s Ame-sans latest FC iteration, it looks like something that would flash its headlights at you on the Shuto for a highway duel straight out of Tokyo Xtreme Racer. With fixed headlight pods, massive wing, and loud but not overly pearlized paint, it certainly captures that Wangan racer feel at the height of the hashiriya era.

Speaking of famed tuning houses, TOM’s came to the Auto Salon with a pair of sleek Lexi. Both the GS F and RC F had been modded with TOM’s signature understated (relative to other cars at the show) but still-means-business body kits, suspension, and TOM’s Barrel titanium muffler. While TOM’s supercharged Lexi are legendary, the company didn’t mention any drivetrain upgrades here. Perhaps it seems a bit unnecessary when a high-revving 467-horsepower V8 comes straight from the factory.

Big Toyota sedans were further represented by an S180 Crown Majesta slammed on Work Gnosis GR203s. While looking very fresh with its clean and mostly unchanged exterior, under the hood was a different story. Gone was the factory 3UZ V8, replaced with that old tuning standard, a 2JZ straight-six, beautifully done with ITBs.

Top Secret debuted one hell of a sleeper in a seemingly run-of-the-mill tuned R32 Skyline GT-R. Peek under the hood, however, and you’ll notice a VR38DETT transplanted from an R35 GT-R. As with the Juke R, it takes not only the R35’s engine, but drivetrain, electronics and dashboard as well, rather than mix and match pieces from two different and highly computerized cars separated by 20 years of technology. In true Smokey Nagata fashion, it’s an ingenious high-concept swap that combines state-of-the-art performance with the most celebrated neo-classic body. Godzilla in a three-piece suit, if you will. 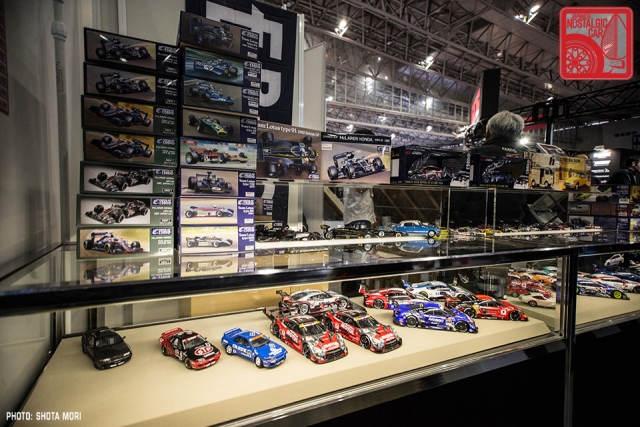 Impulse had a new line of dry carbon fiber body parts made for the AE86. Products covered the range from hoods and doors to fender arches, bumpers and even the timing cover of the 4A-GE motors. To demonstrate, the Hyogo-based company brought out a a track-ready Corolla Levin and a Sprinter Trueno that looked stock, until you got to the driver’s side and saw the carbon door.

The R31 is often overlooked among Skylines, but tuning shop R31 House has carved out a pretty good niche by focusing on this single generation. The centerpiece of the booth was a very rare GTS-R — according to the GT-R Registry only 823 were built for Group A homologation — with light mods and a meticulously restored RB20DET engine.

With the rare homologation special preserved, fun could be had with a less sacred chassis. Paired with the GTS-R was an R31 wagon, more heavily customized with a naturally aspirated RB20 breathing in through a set of trumpets and exhaling via a gorgeous custom header.

The booth even devoted space to an entire line of radio controlled Skylines. The R31 naturally took center stage with variations such as the GT-X, Tommykaira M30 and Autech versions, but Skylines of every generation, from Hakosuka to R35, were represented.

Another R/C company was selling a line bosozoku-inspired 1:10-scale bodies. Models ranged from 430 Glorias to Soarers to Toyota Mark IIs, all with flares and sharknoses. A deep discount was on offer too, with ¥5,180 items marked down to ¥1,500.

Elsewhere, an LED company called Gontaya was showcasing their own R31, but with a focus on wild customization over performance. With a colorway of turquoise, pink and white taken directly from a 1980s Trapper Keeper, it was impossible to miss. Every light on the car had been replaced with an LED to colorful effect. The interior, with its pure-white leather and pink accents, looked like a big sugary cake ready to eat.

A very wide-bodied Starion built for either drifting or transforming into a Gundam was debuted by students from the Naka Nihon Automotive College. Though it appears to be a Mitsubishi, upon closer inspection an R32’s RB26DETT resides in the engine room. The students want to take it to the track, but have run out of funding. Perhaps Carlos Ghosn will kick in a few yen for this Nissan-Mitsubishi union.

Another student project from the Toyota Technical College Tokyo was called the KP61 Street. Given the parent company of the school, the base car was of course a Toyota. A Starlet, to be exact, done up in what the students called “ojisan (literally ‘old man’) generation” style. That’s not a knock, but a tribute to old school tuning preferences like metal flares, SSR reverse mesh wheels, AE86 seats, resin bumpers, and a custom mesh grille.

We end with Obayashi Factory, who created the stunning lowrider Cedric from last year. For 2017, they built an 80s-style Mark II van whose entire cargo area was filled with glowing woofers. As owners of an equivalent US-spec Cressida wagon we can attest to just how much one can cram into these wagons, and it is a lot. There are speakers everywhere on this thing, even coming out of the top of the dash.

You probably won’t see the JNC wagon equipped like this any time soon, but such is the diversity and madness of the Tokyo Auto Salon. An exciting car show indeed.