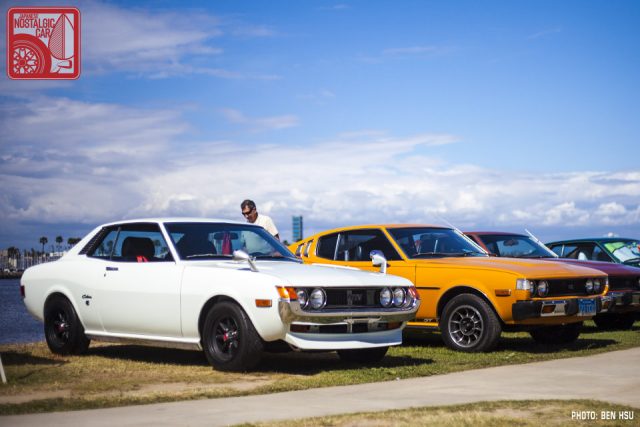 For the final installment of this year’s Toyotafest we share the JNC staff favorites. In a show packed with prime Aichi steel, it wasn’t easy to narrow down the field, making the results probably over-long. But hey, it’s a good problem to have, right? 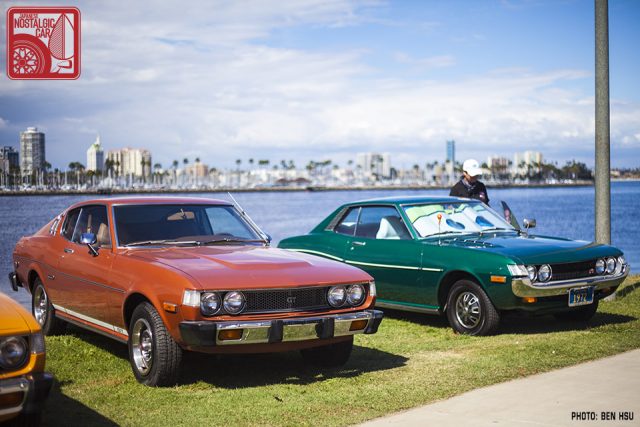 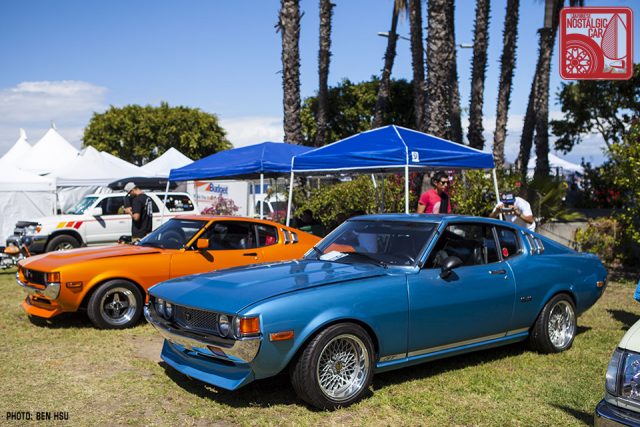 A20 Celicas are really coming into their own. Unlike past Toyotafests, there were no “beater” first-gens this year. The only examples shown were either superior restorations to bone stock — like Joe Accardi’s one-owner brown Liftback — or unmolested ones — like Mike Malnick’s unmolested survivor (lead photo) — or high-quality resto-mods — like Brian Karasawa and Jeff Yee’s nisei style street machines. 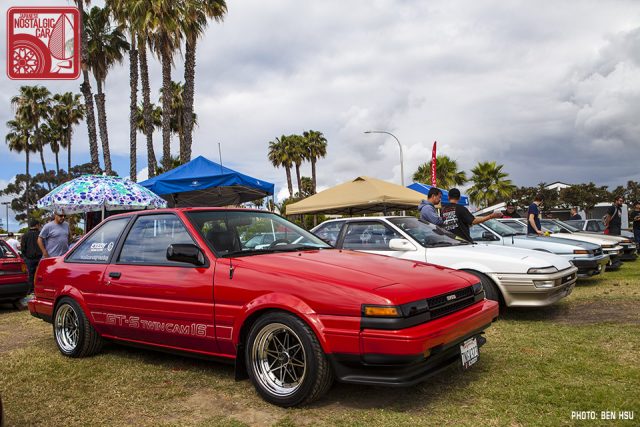 We saw many hachiroku in Part 03, but Brandon Most’s AE86 Coupe is one of the best restorations out there. Aside from a reasonable drop on Work Equip 03s and an Exedy clutch, it’s extremely faithful to its USDM Corolla GT-S roots. It even has the large bumpers endemic to Stateside Corollas.

If it looks familiar, that’s because it was the same car restored by Duane Tomono and Janet Fujimoto, Toyotafest regulars that have built a host of stellar JNCs. They apparently needed to thin the fleet to make room for new projects and searched high an low for the right buyer, one that would preserve the car properly. Brandon was that lucky guy. 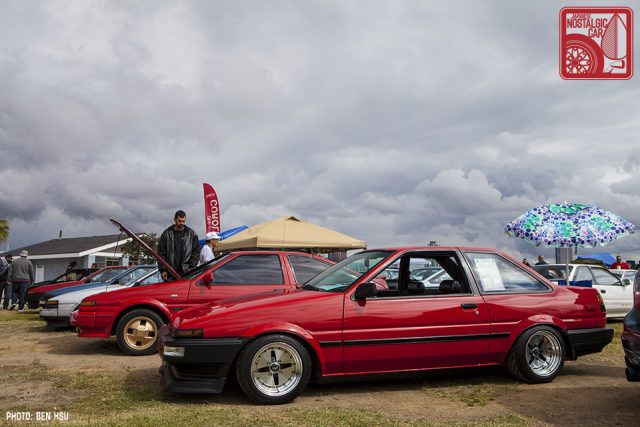 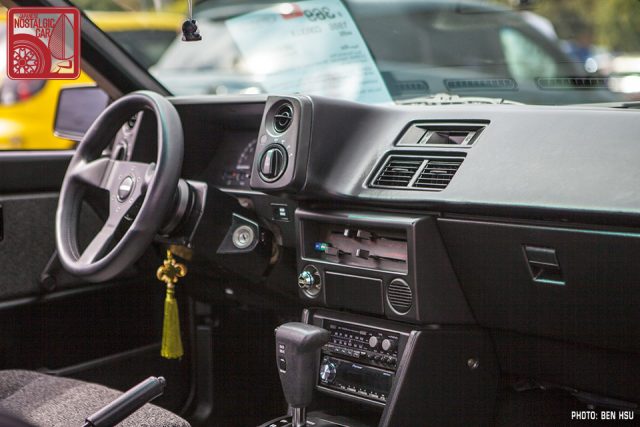 Another one of our favorite hachiroku wasn’t an AE86 at all. Humberto Peña’s 1986 Corolla SR5 Coupe, an AE85, was one of the cleanest we’ve ever seen. The dash remained miraculously uncracked, and the red paint unfaded. 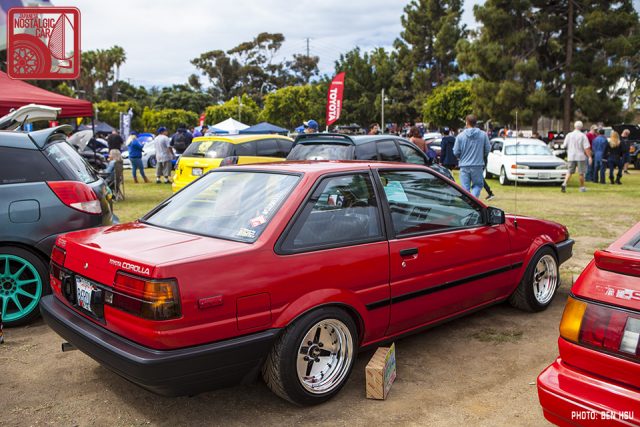 The SR5’s black bumpers were swapped with mint JDM ones. Normally, American GT-Ses look weird, with the JDM swap, because most were monotone rather than two-tone. However, on the SR5 it looks so right because SR5s came with black door trim that connects the black JDM units visually. A lowering on Work Equip 01s is the only other modification and it’s easily reversible. The work was put into the detailing. Humberto plans to keep it as a cruiser, keeping the automatic transmission. A true gem. 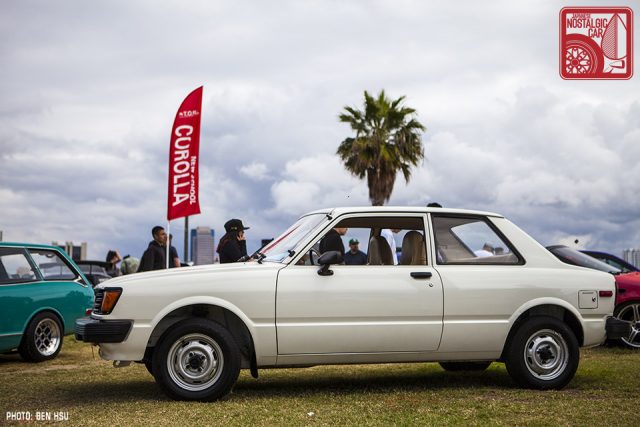 Edgar Briones’s 1982 Tercel was an unexpected favorite, but it won us over with its rarity and showroom freshness. Sure, the Tercel doesn’t get a lot of love, but that’s precisely why we admire Edgar for keeping his on the road while this once-common model was sent to the crusher by the truckload. It’s a true survivor, and still wears its original paint. 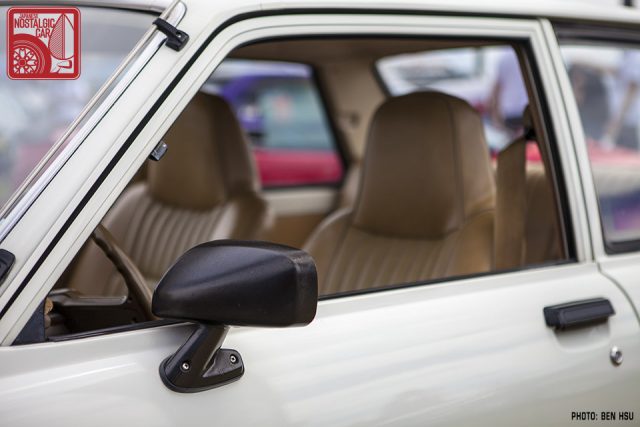 As we stood there admiring the car, friend of JNC Chris “The Black CRX” Hoffman stopped by. The longer we looked at the car, the more interesting features we noticed. For one, the mirrors looked unusually sporty for an entry-level model of its era. How entry-level? The C-pillars had indentations for a pop-out rear window — but no latch! 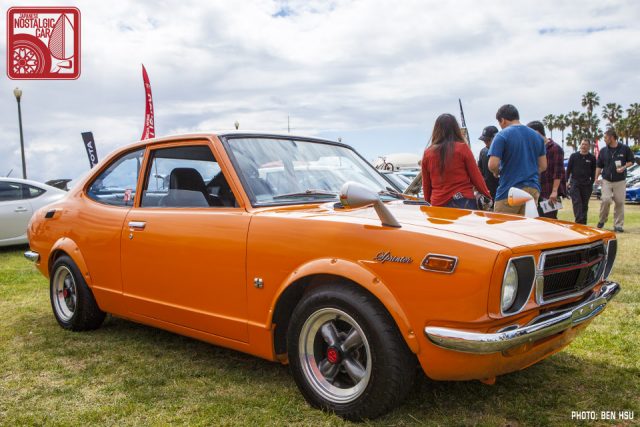 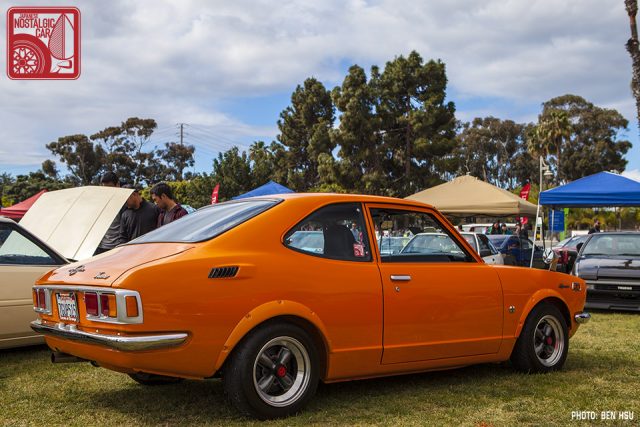 As usual, Russ Capulong stunned us with another gem from his collection. His TE27, originally a US-spec Corolla Coupe, been transformed into an incredibly faithful JDM Sprinter Trueno. With period-correct RS-Watanabe wheels, but the rare 4-spoke instead of the ubiquitous 8-spokes, the only thing that reveals its American-market roots is the side the steering wheel is on. 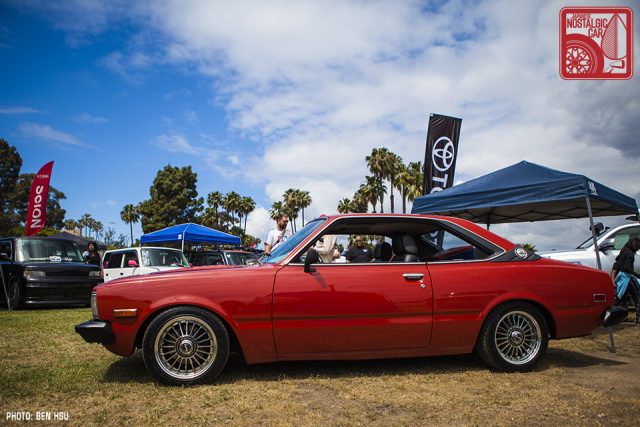 A veteran of the inaugural Touge California, Lawrence Keller’s RT114 Corona Hardtop Coupe is always beautiful to behold. A long-time Toyota employee and supporter of the show, we were saddened to hear that this will be Lawrence’s last Toyotafest. The move to Texas is beginning, and both Lawrence and his cars will be heading to Plano soon. 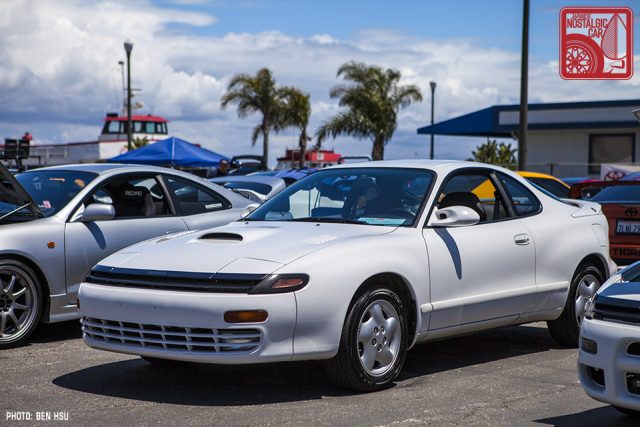 Jaw-dropping in its originality was Noel Navarrate’s 1991 Celica All-Trac. The all-wheel-drive, turbocharged rally homologation special — called the GT-Four outside of the US  — is incredibly rare. Only 2,500 examples were imported into the US, and most of the hooned to death. An stock example is a unicorn today 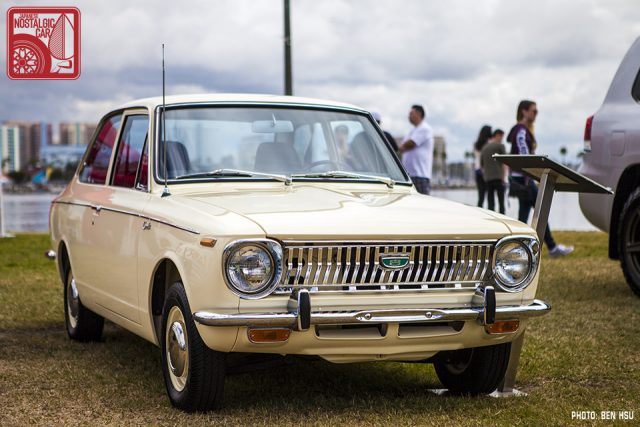 This year marks the 50th anniversary of the Corolla, and  Toyota USA was there with a rare first-gen KE10 from their own collection. It’s the same car we recently saw in New York at the official anniversary kick-off party, and likely the finest KE10 left in the country. Toyota, however, has managed to find a second one, and will enter it in The Great Race later this year as part of the Corolla’s year-long 50th birthday party. 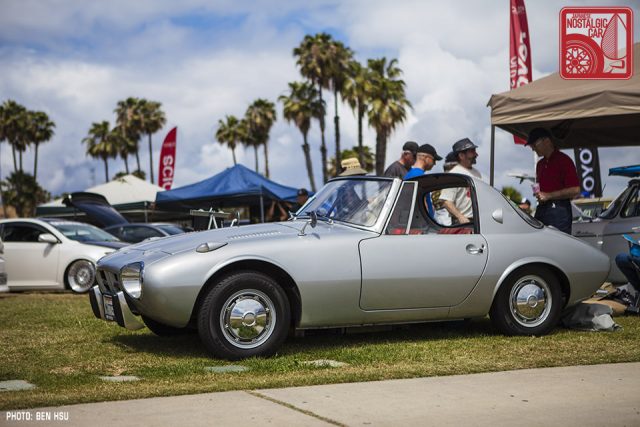 Speaking of golden anniversaries, last year the Toyota Sports 800 celebrated its own. Through various US-Japan dialogues, of which JNC contributor Chris Nicholson was a part, at Toyotafest this year a new trans-Pacific coalition was formed in support of this iconic model.

Sports 800 Club members from Japan took Toyotafest as the occasion to come and meet with US owners, so in the future a parts and support network can be established. One of the Japanese emissaries was Mr Sugiyama, a former Toyota Motor Corp exec. As an esteemed guest, he was given the privilege of bestowing the Toyotaku Award this year, an honor he gave to Matt Spielberg and his 1967 Yotahachi. 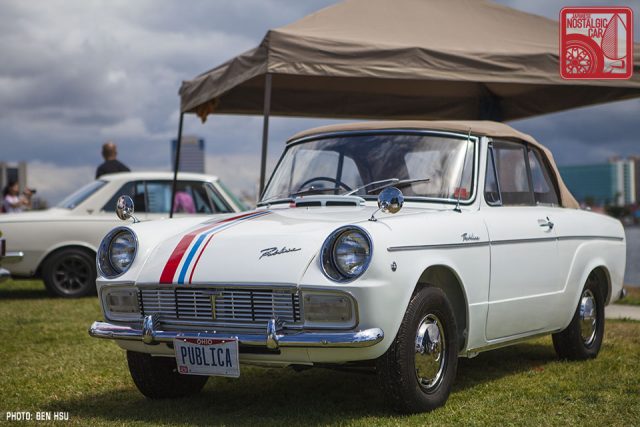 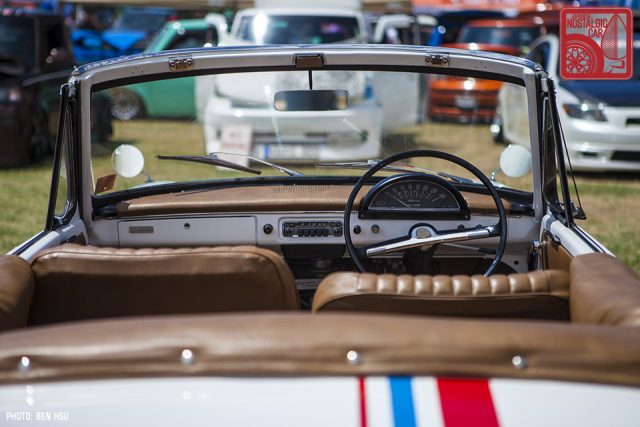 JNC‘s Touge California rallymaster Patrick Strong’s favorite car of the show was Samuel Carbaugh’s 1965 Publica Convertible. Samuel’s father, who was on an US Air Force tour in Japan at the time, purchased the Publica in 1969 and brought it back to US  in 1970. Samuel drove it throughout high school, where it served as the steed on which he met and dated his wife Lisa. 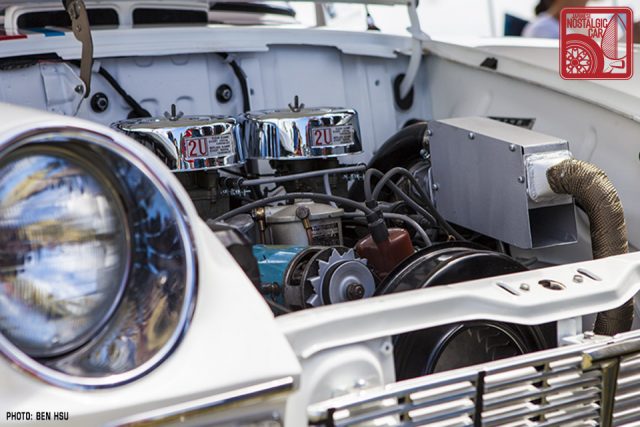 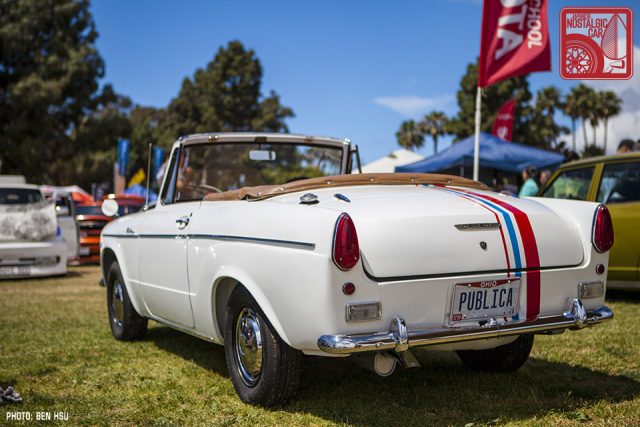 It was a daily driver until 1983. In 2013, Samuel decided to undertake a two-year restoration that finished in September 2015. The engine was replaced with an 800cc, dual-carb boxer twin shared with the Sports 800, rather than the original 700cc single-carb unit. Samuel brought it to Toyotafest all the way from Ohio, and won the Oldest Toyota award for his efforts. 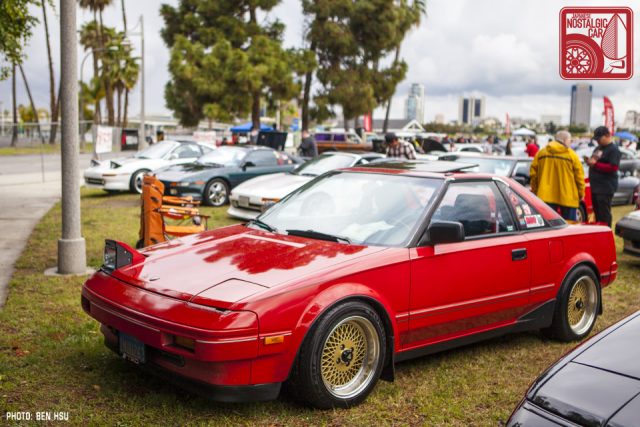 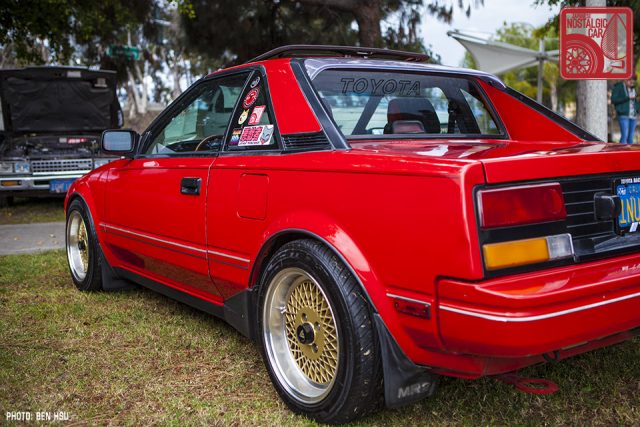 We also really liked Louie Graciano’s MR2 and its lack of a factory spoiler. Without it, the squared-off rear looks even more like an 80s cassette deck or a video game cartridge. The “TOYOTA”-etched rear spanning the flying buttresses is made even more promienent by the rear wing’s absence, an ingenious touch. Leaving the OEM mudflaps and black rocker panel trim while not over-slamming it on period correct Enkei 92s gives it that total 80s look, and if that wasn’t enough, it even came with the original window sticker from 1986 showing that it sold for $13,908. 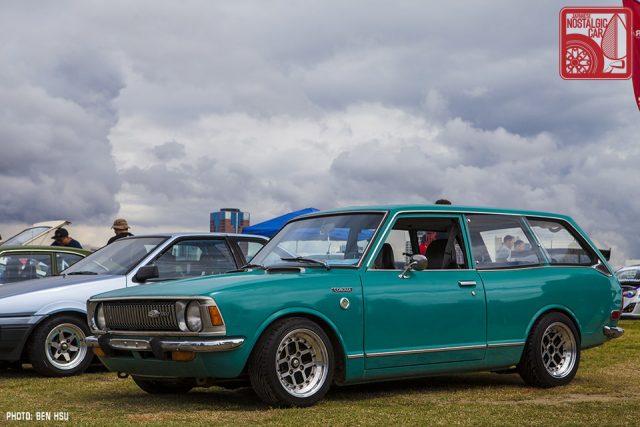 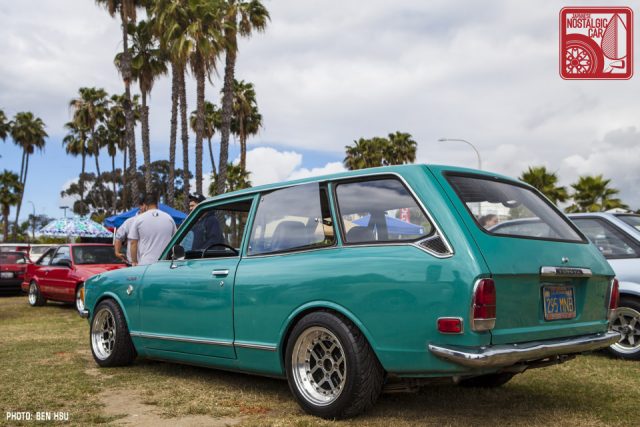 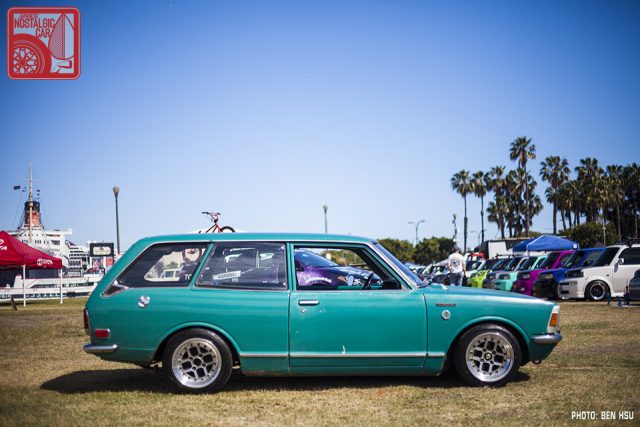 My personal favorite was Carlos Hernandez Jr’s 1972 Corolla Wagon. Aside from minor suspension upgrades — an AE86 struts and Cusco camber plates on the front, lowering blocks on the rear, and Tokico shocks and August Feroce wheels all around — it’s as original as the day it left the factory. TE28s are insanely rare to begin with, and Carlos’s is an amazing survivor with original Surf Blue paint. 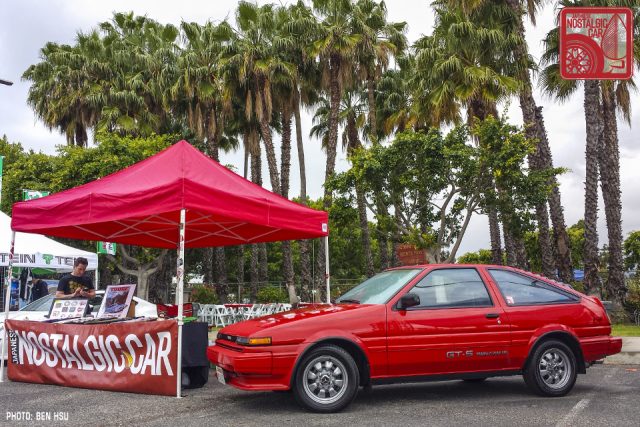 As for the official JNC booth car, this year we chose Russ Capulong’s bone stock kouki AE86 hatch. We at JNC helped bring his car to New York as part of Toyota’s official Corolla 50th celebration, and if it was good enough for Toyota, it sure as hell was good enough for our booth at Toyotafest. It’s quite possibly the best example of a stock AE86 hatch in the US. 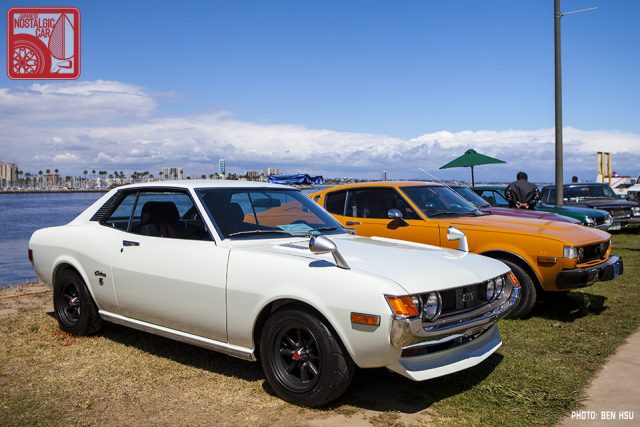 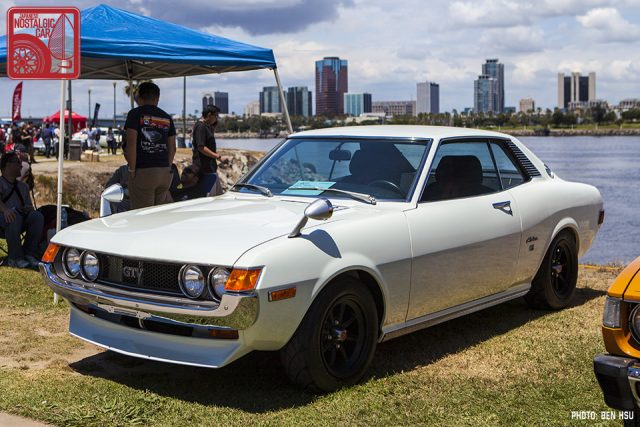 And lastly, with so many excellent new-school Toyota, Lexus and Scion models at this year’s event, it was good to see Best of Show go to an old school Celica. Raymond Francisco’s 1974 RA21 made a tremendous debut. Painstakingly converted to look identical to a JDM 1600 GTV (except for the LHD, that is), it was resto-modded with a host of OEM parts, TRD bits where appropriate, and an 18R-G under the bonnet. With black Wats that aren’t overly wide, it gives off a period street fighter look that is rarely seen on this side of the Pacific.