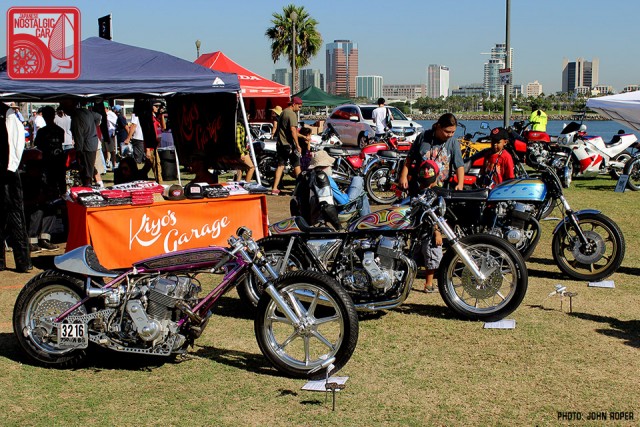 As we near the end of our JCCS coverage, we arrive at a subject we rarely cover on JNC, but we love two-wheelers just as much as four. In Japan, however, the ratio of motocycles to automobiles is far greater than in the US, and is really a core part of the motoring culture. While we celebrate the cars, we can’t forget about the bikes. 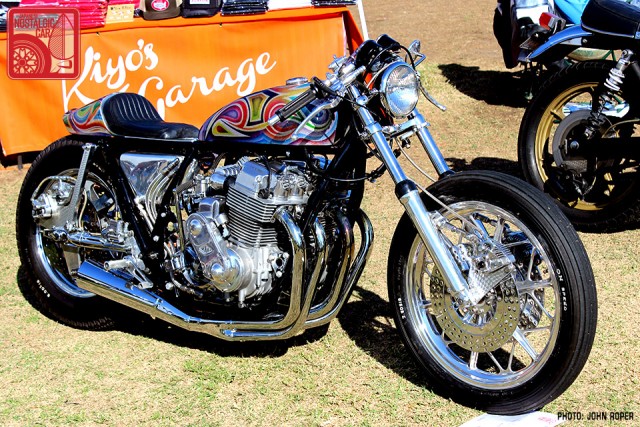 Mitsuhiro Kiyonaga came to California by way of Japan. As a result, his custom bikes are a mix of American SoCal and Japanese styles. This year, he displayed three Honda CB750s all with wildly different purposes. The first is called “Ouh-Wee,” which is the noise your mouth makes when you see it. The elaborate paint was done by OG Doc, a legend in lowrider circles. 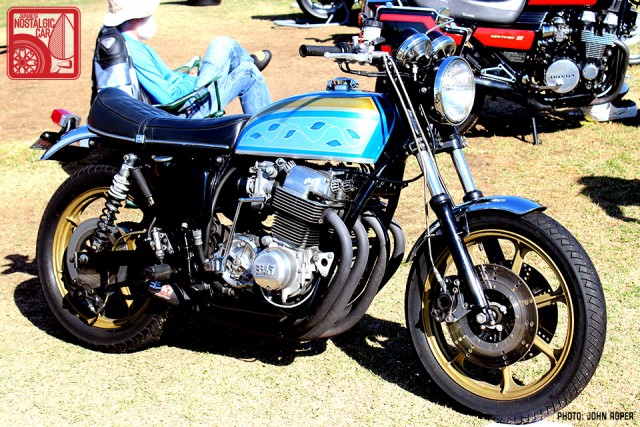 While Ouh-Wee was built for a customer under the Kiyo’s Garage banner, the two others displayed were Kiyo-san’s own bikes. “Blue Max” was made to compete in the American Historic Racing Motorcycle Association’s vintage racing class. It also happen’s 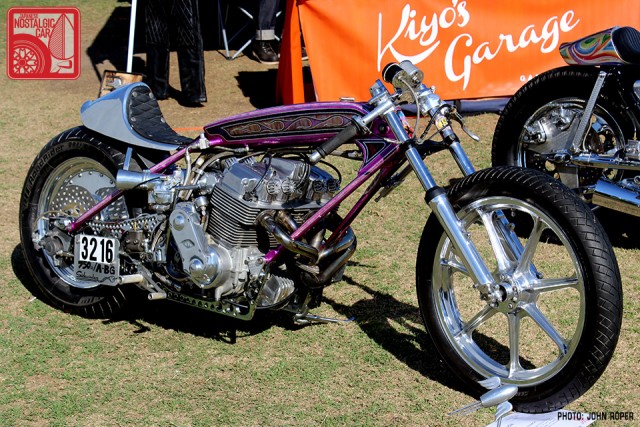 Despite its ornate paint job and show-bike looks, “Cherry Blossom” was built in 2013 to challenge the land speed record races at El Mirage. Kiyonaga says he will continue to the desert flats on this year as well. 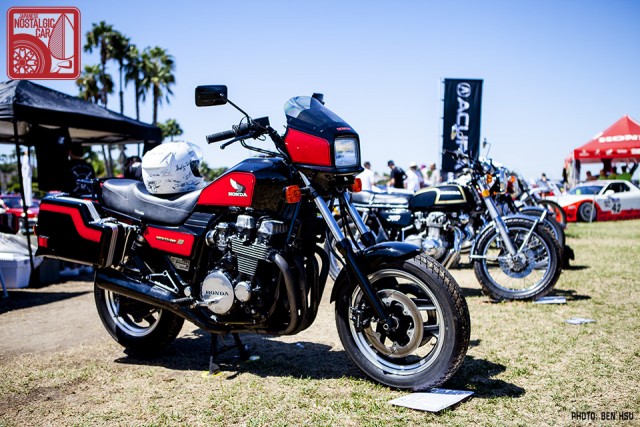 The Honda Nighthawk 700S was built from 1984-86 and looks very much of the era. Everything from the mirrors to the fairings to the gas tank were square and angular, and Honda’s goal was to provide a custom-looking bike right out of the factory. While most of the rest of the world got it as a 750S with 50 more cc, the US had a 45 percent extra tariff on motorcycles with displacements great than 700cc, so Honda was forced to reduce the engine size for us. 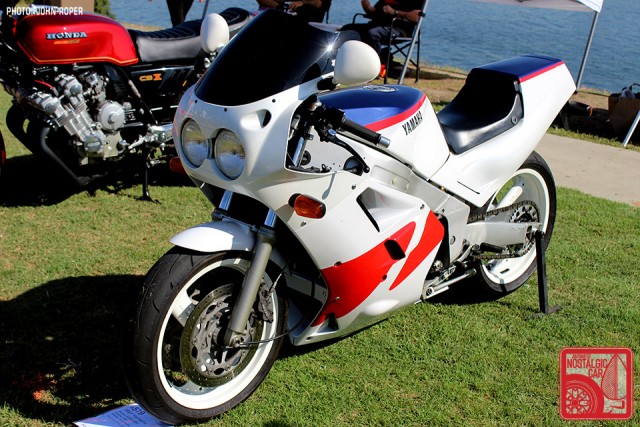 Bikes are so ingrained in Japan’s motoring history that two of its most well known automakers — Honda and Suzuki — do thriving business making both cars and motorcycles. A third, Yamaha, is owned by Toyota and has built everything from the 2000GT to the twin-cam heads that power TE27s, AE86s and Celica All-Tracs.

To me, John Aguilar’s FZR1000 is the epitome of the Bubble Era Japanese crotch rocket, something that looks like a combination of an Ultraman conveyance and a bosozoku bomber. 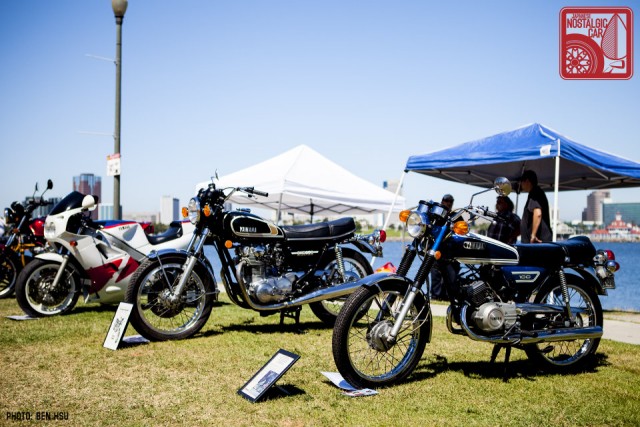 Several of the Yamahas at the show were bone stock survivors, like Edgar Briones’s blue-on-white 1972 LS2. Next to it, Matt Raminick’s 1975 XS650B was a true barn find, discovered sitting in a Detroit area garage for over 25 years with only 2,500 miles on it. 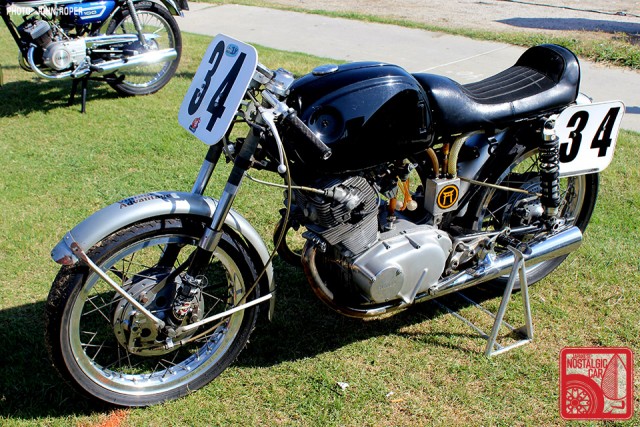 This 1962 Honda SuperHawk belongs to Tim Mings, the Honda 600 expert that unearthed the first Honda automobile built for export to the US. The long time Hondahead is also a motorcycle racer and has been racing this one for over 15 years. 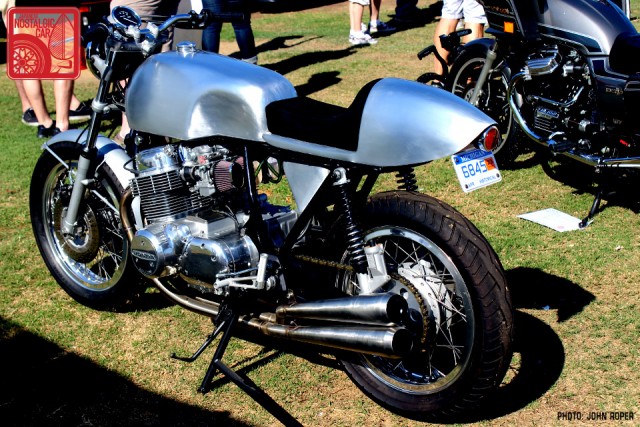 I wish we had gotten the chance to talk to the owner of this Honda cafe racer that John shot. All we know is that we love the unpainted steel body and that curved rear fairing with the single taillight peeking out from under it. 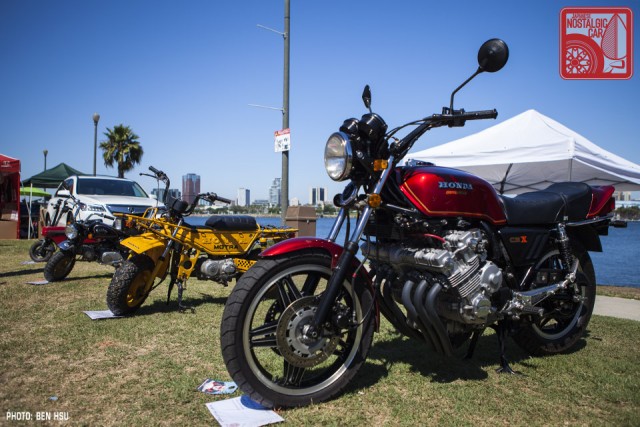 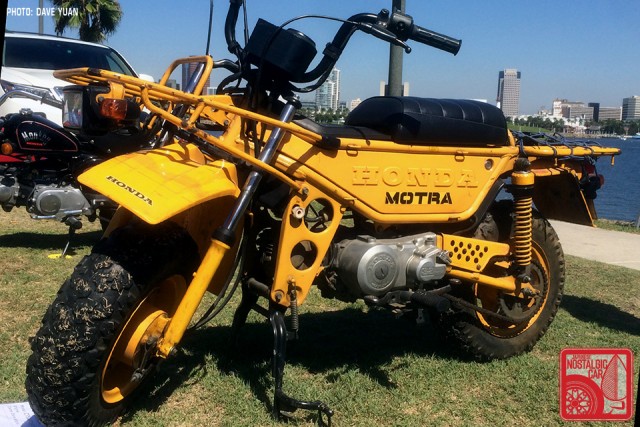 Honda was the most well-represented bike manufacturer at the JCCS, and the range of diversity in just this one row along shows exactly why. Going down the line, we start with John Aguilar’s 1980 CBX, the company’s first 6-cylinder bike. Next comes Steve Kopito’s Motra, a heavy-duty off-road mini-bike. That’s followed by a Z50 Monkey, coming soon in Hot Wheels form. And the lineup ends with a Motocompo, which comes with its own turbo hatchback. 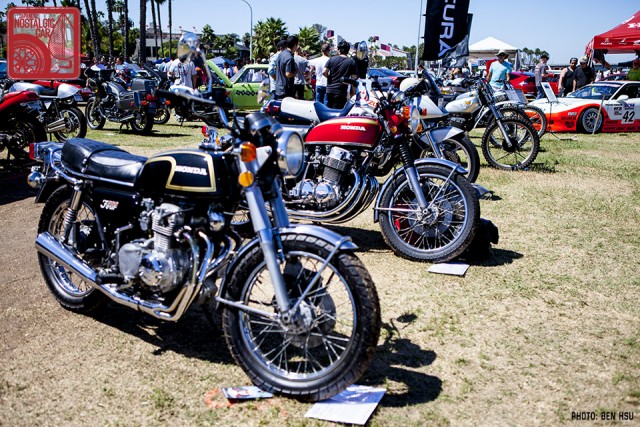 Across the way was another set of Hondas, including Thomas Vu’s CB350F, which sports a classic gold-on-black look but has some upgraded engine internals he declined to disclose. 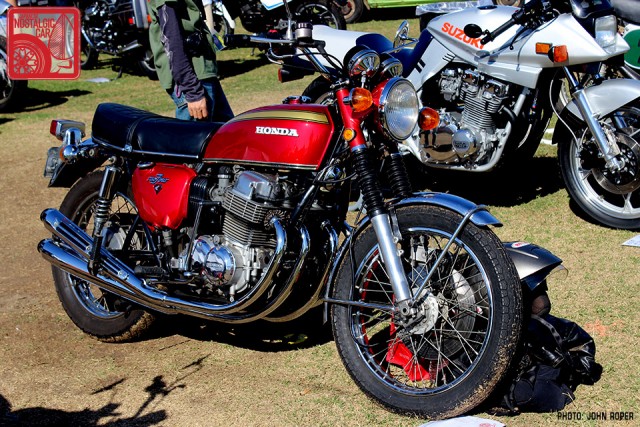 Beside it was Richard Bowers’s 1971 CB750, which has been his daily rider for 14 years and has never seen an engine rebuild. 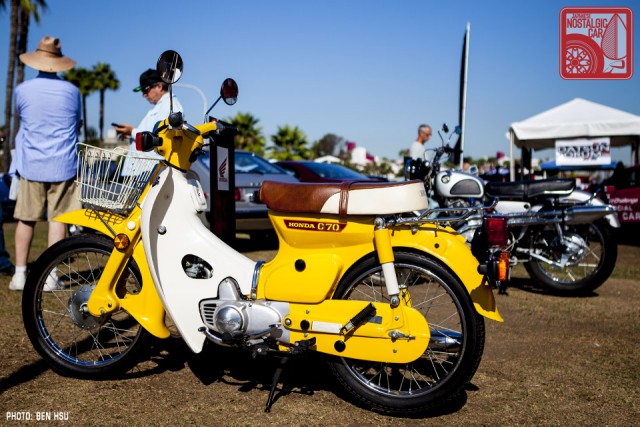 This early Honda Super Cub is beautifully retro in yellow and white, and how can you not love the two-tone brown saddle? It even has a basket! Despite the faster and perhaps “manlier” bikes in this installment, this little guy has one statistic that none of them — nor any car, for that matter — can touch. With over 87 million sold, it is by far the most popular motorized vehicle on Earth.

We’ll have more 2015 JCCS coverage coming up, but in the meantime in case you missed it here’s Part 01, Part 02, Part 03, Part 04, Part 05, and Part 06, as well as special features on the first Honda built for US import, the Ibarra Bros’ classic Mazdas and some very special Z-Cars. You can also take another look at last year’s 10th anniversary of JCCS.