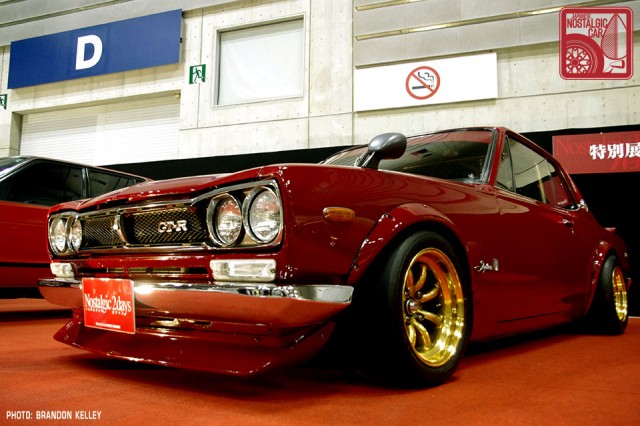 Part 03 of our 2014 Nos2Days coverage comes from a new contributor, Brandon Kelley, a resident of Tokyo. He met up with David, who supplied Parts 01 and 02, after a 45-minute train ride to Yokohama. The two of them toured the event to bring you these photos and report.  — Ben

Walking into the main hall, there is a blast of metallic lead paint and a strong smell of yesteryear. Yes, once again, the Yokohama’s Pacifico Convention Center has been stuffed with classic J-tin, many of which see the day of light once, and only once, a year. There’s a mix of cars ranging from garage queens restored with nothing but the best new old stock to humble badges long forgotten by their makers.

Within literally five steps into the grand hall, we are greeted by another an estimated $1-1.5 million’s worth of Toyota 2000GTs, a C2Corvette and a Mazda Cosmo Sport. It’s no wonder they rolled out the red carpet. Upon closer inspection, we see that the Cosmo is a 10B kouki by the shortness of quarter panel between the door and rear fender wells. Its fine script badging is a long lost art, but no true classic can resist a good parcel tray speaker. Nothing shows a blatant disregard for technology and safety like pointy projectile boxes in the event of an accident. It is the embodied seal of excellence.

Rounding a few corners, we arrived at the Nostalgic Hero red carpet cars. Each was an alumnus of the famous Japanese car magazine empire, having graduated by adorning the cover of Nostalgic Hero, Nostalgic Speed, or 80s Hero. First in line was a 1970 Bluebird SSS Coupe looking like a great way to take a run to the local dango shop, but the 1.6L engine with twin carbs will show the true spirit of this bird.

Also in the lineup was a 1965 Subaru 360 and a showroom quality 1971 Skyline HT 2000GT-R complete with original steelies. Seeing this in person was like seeing royalty. Oh yea, and another 2000GT.

Further down was another Skyline, but this time a 1972 HT 2000GT-R with a reverse approach. Not only was it slammed to the ground rocking gold Wats and period chin spoiler and over fenders, it had a beast within: an OS Giken TC24-B1 engine. Talk about baller on top of baller! No wonder it was the cover car of Volume 3 of Nostalgic Speed, the resto-mod spin-off of Nostalgic Hero. Next to it sat a 510 Bluebird sedan that has a great patina and has seen quite a few drift days down at the local circuits. 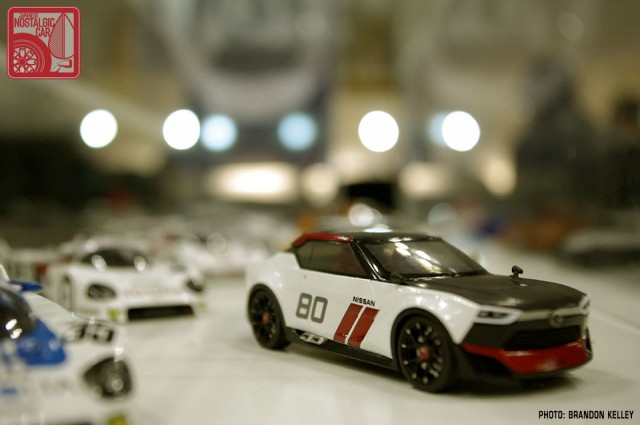 Japanese model car maker Ebbro displayed a glass case with several fine examples of miniature J-tin. Sure, there were the usual suspects of LeMans race cars and Group B rally dreadnaughts but standing front and center was the Nissan IDx NISMO Concept. The detail was incredible and really captured the leap of faith Nissan took. Prices are expected to be around $60 for an April release.

MoonEyes are always a gas, and they brought with them something I’ve personally never seen in real life, a Crown Pickup. From the paint to the white lipped tires, it could easily be seen slipping along the Tamagawa River or cruising the streets of LBC. The interior is simple and restrained, just a couple of Mooneyes floor mats and a stock analog clock in a bullet-shaped bezel.

Nearing the last quarter of the hall, Liberty Walk had on display arguably one of the best examples of yanki pride around, the Dual Factory deep purple C130 Laurel SGX. The gold Shadows were well in the ballpark of $4,000 and before you ask, yes, it had a set of parcel tray speakers. Pioneer TS-X9s to be exact, which also happens to be the most coveted. These puppies go for $100 in junk shape. 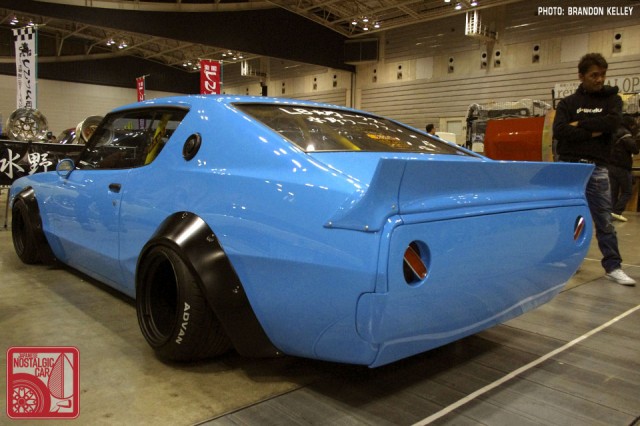 The owner of Liberty Walk, Wataru Kato, is more known for his wild Lamborghini body kits (supplied by Kei Miura of Rocket Bunny) but we can see where his heart is. A nice guy and when he asked me about what I thought of his other car, a baby blue garuchan kenmeri Skyline, I had to say it was in my top three. Just looking at it speaks for itself.