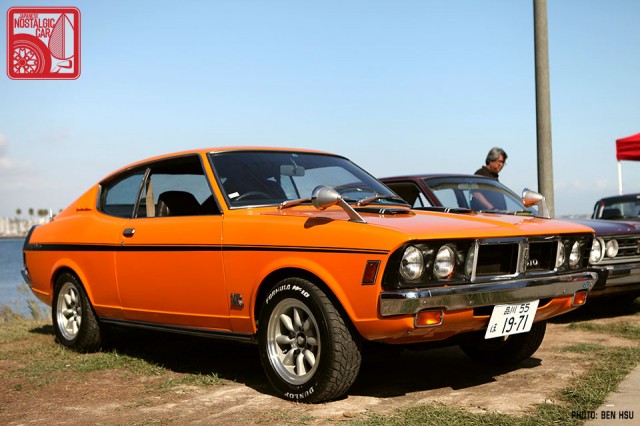 As long-time readers know, the Japanese domestic market was stocked with stunning machinery that never made it to our shores. The Japanese Classic Car Show is likely the only place in the western hemisphere where you can see so many of these gems gathered in one place.

As we revealed in Part 01, we were very excited to debut Matt’s GTO GS-R at this year’s event. It’s a very rare car to find in the States, which is why we were amazed and pleasantly surprised to be joined by a second one, Orly Tapay’s 1971 Colt Galant GTO MR. Orly’s is an early model, powered by a twin-cam 1.6 Saturn engine. Finished in a gorgeous gorgeous Kenya Orange and a black decal stripe framing the rear ducktail. Aside from a set of silver Watanabes, it was a superb bone stock example and one of our favorites of the show.

Another orange objet d’art was Russ Capulong’s 1972 TE27. Though we only received the Corolla Levin versions (sans 2TG motor) officially in the US, Russ has built an incredibly faithful early Sprinter Trueno clone. The red grille crosshair grille is an especially rare piece, as are the period correct Watanabe four-spokes. 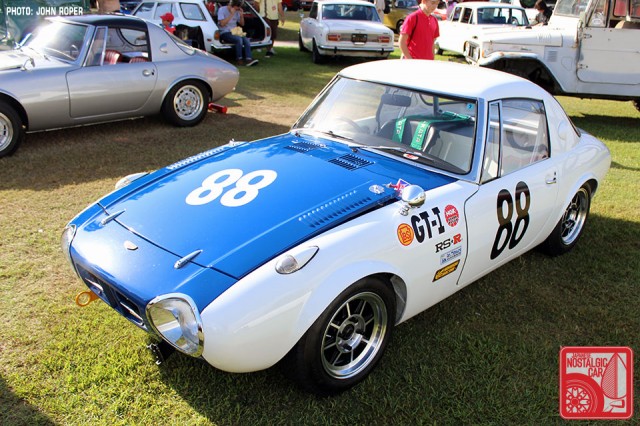 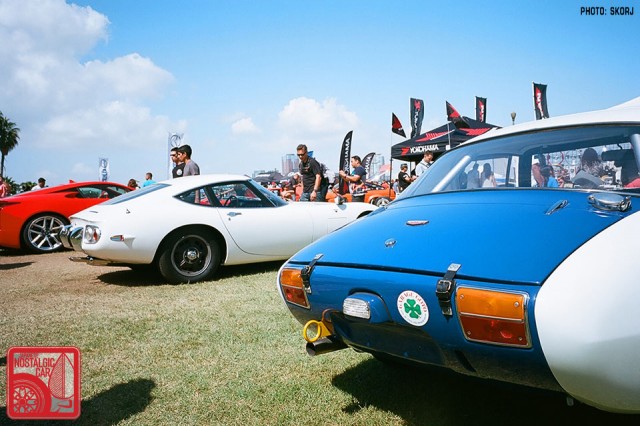 We saw the Dainichi Toyota Sports 800 race car at the Rolex Motorsports Reunion, taking to the legendary Mazda Raceway Laguna Seca. The owner, Mr. Tamaru, spent upwards of $100,000 restoring and building what is likely one of the finest yotahachi race cars in the world. According to Moto Miwa, Tamaru-san even blueprinted the 800cc boxer twin with help from GT500 driver Ken Matsuura. 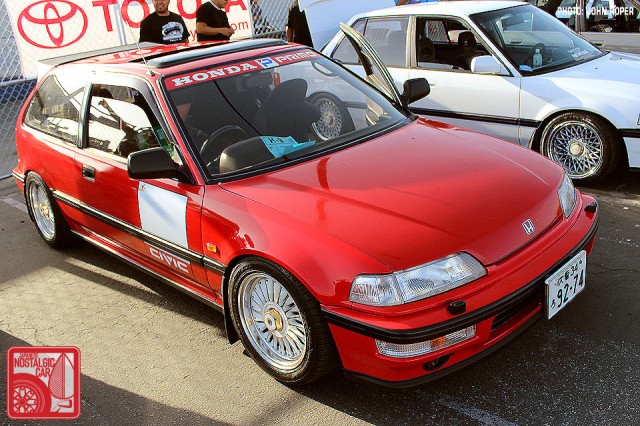 The bulk of iconic Hondas are fast approaching nostalgic status, and they showed up in force for JCCS this year. It was 1990s Honda tuners that really kicked off the whole JDM trend, so it’s only fitting that those devoted to the marque can get a bit obsessive. During the height of Honda’s market dominance, Primo was one of three Japanese dealership chains, and the one the Civic called home. 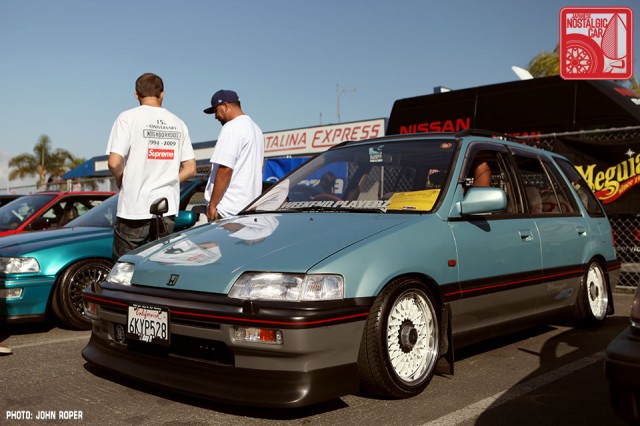 Benjamin Cruz decked out his Honda Civic Wagon in every JDM part imaginable, and not just the obvious bumpers and lights. Even the floor mats are from Japan, as are the windows which have a slightly bronzer tint than US ones. It’s a level of devotion we can’t help but admire. 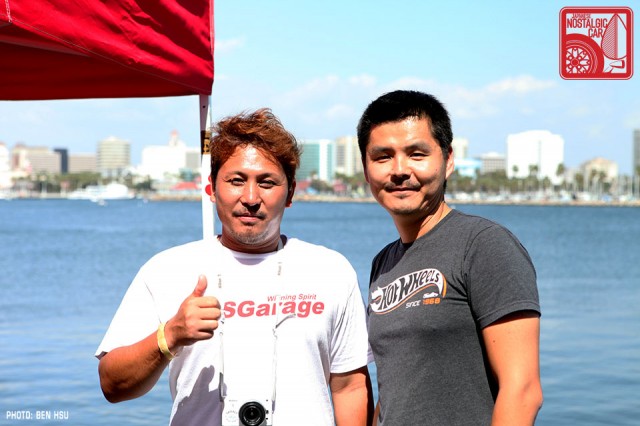 Speaking of Hondas, during the show an impromptu historic summit occurred the JNC booth. Kazuhiro Furukawa of Osaka JDM, Japan’s hottest Honda tuning shop, met Hot Wheels designer Ryu Asada, who brought us the EF Civic, for the first time. Coincidentally, both are Osaka natives and have done more for Civic than all the Fast and Furious movies combined.

No gallery of JDM cars would be complete without a collection of Nissan Skylines, and JCCS did not disappoint. From Eric Routhe’s four-door hakosuka to Jay Kho’s DR30, not to mention all the debuts from Part 01, it was a banner turnout for the poster child of the Japanese nostalgic movement.

One of the most notable Skylines was a 1975 kenmeri rocking a Rebello-built L28 stroker bored out to 3.2 liters. With individual throttle bodies and coilpacks managing fuel and spark at each cylinder and coilovers suspension, it was a brilliant restomod that showed off the owner’s mechanical know-how while showing equally important restraint on the styling. We need more builds like this. 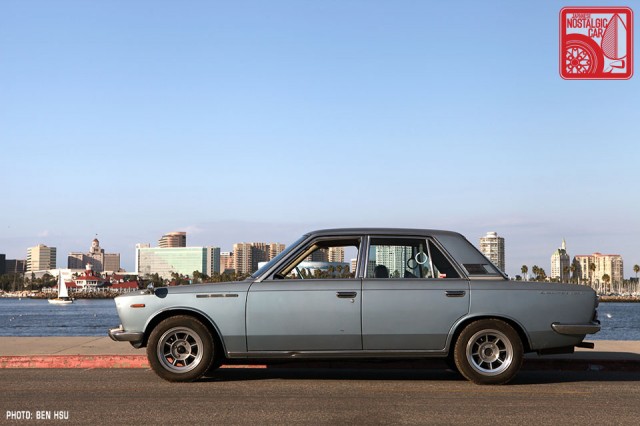 A rare C30 Nissan Laurel was parked at the the Datsmo booth. It was a one-owner car imported from Nagoya by owner Josh Kreat, and is equipped with the early Prince G18, an aluminum crossflow head inline four.

Strictly speaking, Hector Sanchez’s 1974 Toyota Publica is from Belgium, but it’s a model that is most commonly seen in Japan and was never sold in the US. It was in storage for 30 years and is about as mint as you can get. Everything is original, from the paint to the spare tire to the tool kit to the factory sticker on the rear axle. The odometer reads less than 18,000 miles.

This year’s show also saw several Fairlady Zs in attendance. There were several superb examples of S30s, including Juan Alfonso’s tastefully modded yellow ’71, with an L28 swap and Aussie Simmons 3-piece wheels. Surprisingly, there was even one S130 280Z on Longchamps.

Last but not least, a gallery of “small” Datsuns that exhibit the core of JDM tuning. In the US, Zs pretty much dominate any nostalgic Nissan gathering. In Japan, the ratio of Zs to Bluebirds or Sunnys are split pretty evenly. We give Mark Duncan’s B110 two-door sedan and Joshua Leach’s 510 sedan extra respect for representing lesser love body styles.

We’ll have more 2014 JCCS coverage coming up. In case you missed it, check out Part 01 — Debut Builds.