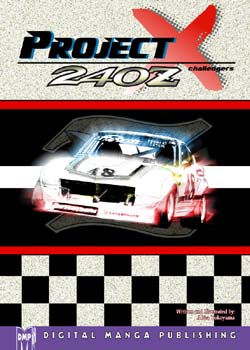 DMP’s Project X: Datsun Fairlady Z, tells the story of the iconic Japanese sports car in graphic form. Unlike Wangan Midnight, this is non-fiction and  has characters like Mr. K and Yoshihiko Matsuo. The description goes like this.

In 1960s America, the Japanese automobile was seen as a “second-class” inferior. In spite of it all, men dared to dream of building a world beating Japanese sports car. Through the innovative zeal of Yutaka Katayama (now reverently known as “Mr. K”) and the genius of designer Yoshihiko Matsuo, this dream became reality in the form of the legendary sports car, the Nissan Fairlady Z. Known as the Datsun 240z in America, this automobile was an unprecedented success and is still beloved today. The dramatic story of these men who refused to be beaten by the hardships they encountered will inspire all who read it.

It’s been around for a while but we’re not really hip to the whole manga scene. At least now we can sleep better knowing that the Z-car is among other hallowed cultural landmarks covered in the Project X series such as, um, 7-11 and Cup Noodle.

permalink.
This post is filed under: datsun, manga, nissan.